One of the most popular attractions at WDYTYA? Live was, judging by the constant queue of people lining up to have their photo taken with her, not a celebrity guest but a replica Spitfire! Although the Spitfire was part of the Forces War Records stand, we had the Lytham St Annes Spitfire Ground Display Team to thank for bringing along this crowd-pleaser. 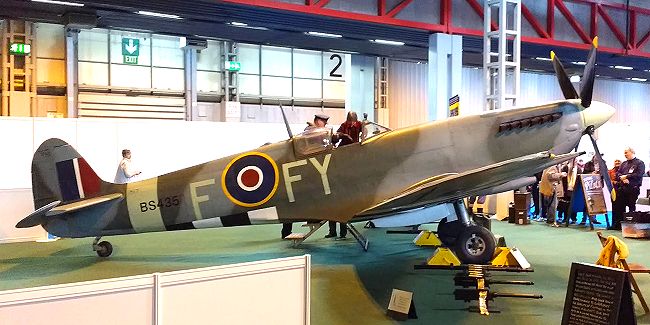 Checking the Forces War Records website yesterday, I found that my advance planning for WDYTYA? Live was incomplete – I should have looked at the site before the event! Forces War Records is the only site to have transcripts of WW1 Military Hospitals Admissions and Discharge Registers. The transcription project is ongoing, and it now includes two entries relating to my great uncle John Atcherley (in addition to two for his cousin Samuel Atcherley, which I have already seen). Had I known this, I would probably have been able to look at John’s records while I was at the show!

Other commercial enterprises with online offerings (Deceased Online, The Genealogist, Ancestry and Findmypast) were of course in attendance too. I took the opportunity to speak to both Debra Chatfield and Myko Clelland of Findmypast during the course of the show and was encouraged by the news they provided. ‘Under the hood’ changes to the inner workings of the Findmypast website are in progress and should enable enhancements to search functionality, family trees, and the rate at which new records are added. (My disappointment at the non-appearance of developments mentioned at last year’s WDYTYA? Live will hopefully be addressed by this in the months ahead!) 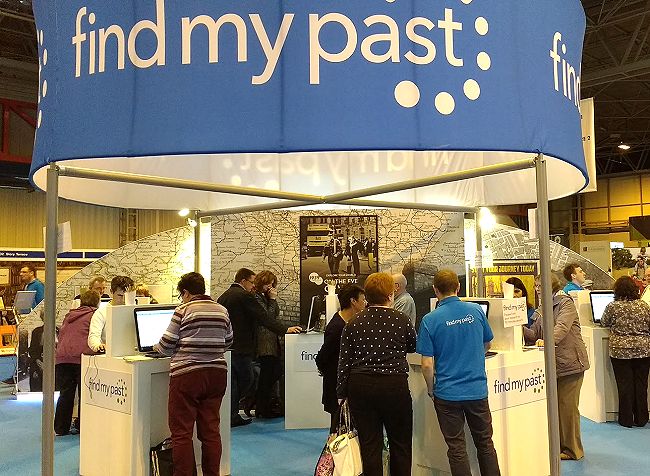 On the subject of new records, there are lots in the pipeline – and the rate at which they are coming through that pipeline is increasing. (This is also true of the historic newspapers, from both Britain and Ireland.) Expect more records from Shropshire and Staffordshire, a great deal more from Yorkshire (Findmypast has an agreement with 6 of the 7 Yorkshire archives), and parish registers from Leicestershire. Also on the horizon are Canadian censuses, and some exciting record sets from Australia. I have no timescales for these arrivals, we will just have to be patient!

Ancestry meanwhile was once again pushing its DNA testing for genealogy, and in a big way. Kits were on sale for £59, which was effectively half price compared with the usual cost plus shipping. I certainly took advantage of this saving (along with the big discount on subscription renewals available exclusively at WDYTYA? Live). The big push was not confined to Ancestry’s stand. Sir Tony Robinson fronted several presentations in Theatre 1 during which a number of ‘myths’ about Ancestry DNA were ‘busted’. Tony spoke to capacity crowds, the members of which had all paid to see him. 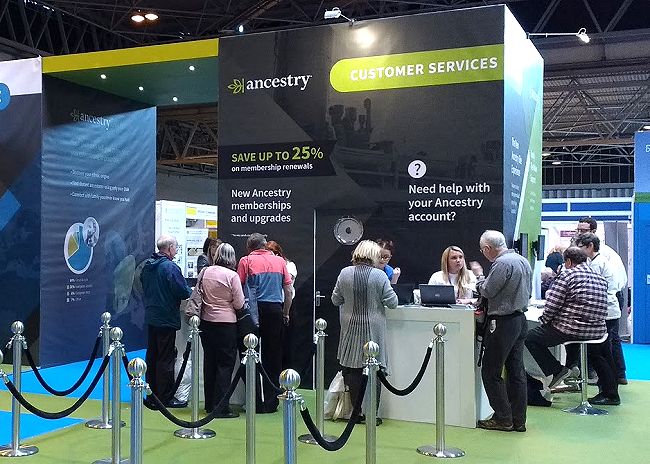 Quite what everyone thought about paying to listen to what was effectively a long commercial for Ancestry’s newest product I’m not sure. However, those who came away with free kits (given as prizes during the presentations) probably weren’t complaining! In fairness I should add that if the marketing works and lots more people take the Ancestry DNA test, that will be to the advantage of both new and existing customers. The more people who test, the more matches there will be, which in turn boosts the chances of using DNA to break through those bothersome ‘brick walls’. 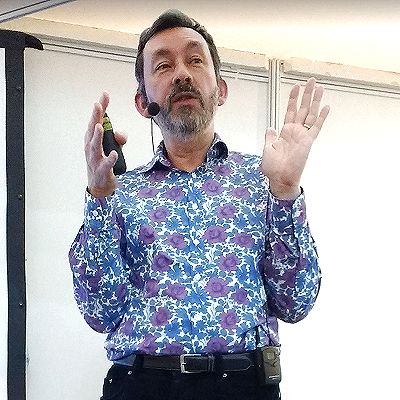 Ancestry’s massive presence rather overshadowed the other, longer-established DNA testing company at WDYTYA? Live: Family Tree DNA. To some extent this was compensated for by FTDNA’s association with the talks delivered at the show’s DNA Workshop. There was an excellent selection of speakers who covered all aspects of genetic genealogy from entry-level to advanced. (One of the speakers, Mark Jobling, is pictured right.) As these talks were free I attended several, and I hope to post a separate article summarising some of the things I learned. FTDNA’s founder, President and CEO, Bennett Greenspan, also gave a talk in Theatre 2. I suppose in the end it was just as much a commercial as Tony Robinson’s presentation, but it was very entertaining and I enjoyed finding out about the birth of ‘consumer genomics’, the history of FTDNA, and some of the stories arising from DNA testing for genealogy. (A link to a page on the Society of Genealogists website, from which you can download copies of handouts / slides from many of the talks given at the show, can be found at the end of this report.) 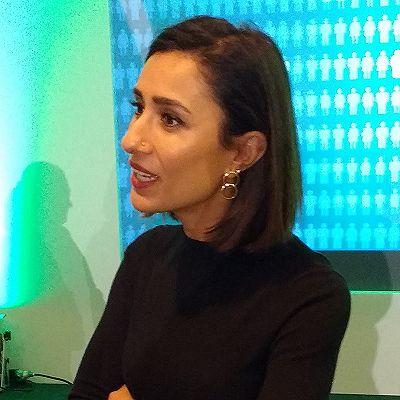 Although Tony Robinson was billed as one of the celebrities attending the show, the only star from the WDYTYA? TV programme to appear this year was Anita Rani. She was interviewed by WDYTYA? Magazine editor Sarah Williams, and their conversation was punctuated by clips from Anita’s TV episode. I am always interested to see how the subjects of WDYTYA? are affected by their experience, and what Anita learned during the making of her programme certainly had a big impact on her. With the 70th anniversary of Partition falling in 2017, Anita wants to encourage the telling, and recording, of the so far untold stories of other families caught up in this traumatic event. I wish her success.

Of course, the real celebrities of WDYTYA? Live are the unsung heroes from the genealogy community without whom many important aspects of the show would not happen. They include the team from the Society of Genealogists who coordinate and staff the “Ask The Experts” area, the volunteers from societies and groups around the UK and beyond who put up stands and provide advice, and the speakers who share their expert knowledge in front of an audience via microphone and PowerPoint. A huge “Thank You” is due to all of them. 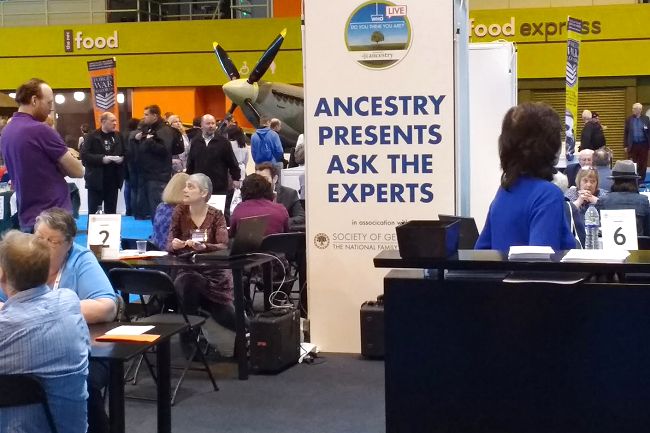 I will close my account of WDYTYA? Live by mentioning another aspect of the show which makes it a joy to attend. That is the opportunity to meet up with fellow ‘genies’ and family/local historians who would otherwise be known only online, via Twitter, Facebook and email. It’s not always easy to find everyone at such a big event (the appalling to non-existent WiFi at the NEC was partly responsible for that), but I did manage to put faces and voices to several names and profile pictures. Thank you to those who sought me out or who, having crossed my path, took the time to stop and chat.

WDYTYA? Live 2017 is a long way off, but I am already looking forward to it!

Read about the experiences of others at WDYTYA? Live:

Andrew Martin (History Repeating): Day One: Who Do You Think You Are? Live 2016 | Day Two

Jane Roberts (Past to Present Genealogy): WDYTYA? Live 2016 : So much to do, So little time

Chris Paton (The British GENES blog): My trip to Who Do You Think You Are? Live 2016

Debbie Kennett (Cruwys News): Who Do You Think You Are? Live 2016

Janet Few (The History Interpreter): Who Do I Think I Am? and other genealogical bits

Daniel (The Genealogy Corner): Who Do You Think You Are Live! 2016

Society of Genealogists: Who Do You Think You Are? Live: Speakers’ Handouts

Watch the DNA lectures given at WDYTYA? Live 2016

YouTube: DNA Lectures – Who Do You Think You Are