As a result of his conviction for fraud, Robert Atcherley Taylor [

] was sentenced to seven years transportation or, as one commentator gleefully expressed it, “ordered to Botany Bay!” What a shock this must have been for Robert’s family, and what shame they must have felt when the story of his misdeeds hit the press. Robert was after all the son of a clergyman – a clergyman for whom, it seems, Robert’s transportation could not come soon enough.

However much his father may have wanted it, Robert’s voyage ‘Down Under’ did not begin immediately after his conviction. The first place to which he was delivered from the Middlesex Session of the Peace was Newgate Prison, a gaol which according to one author “remained constantly, from the first and almost to the last, one of the worst-kept prisons in the kingdom”.

According to a House of Commons Select Committee report published in 1813, “When a prisoner is first committed [to Newgate] … he is usually put into the Common side, from whence he is removed into either of the other two [sides], which he may think proper, upon paying the settled fee.” Payment of a fee of two guineas gained the prisoner admission to the State or Superior Master Felons side; an additional seven shillings a week secured the use of a bed (or, if the number of inmates was high, half a bed). For a fee of 13s. 6d. a prisoner could occupy the Master Felons side, where a bed (or half of one) cost 2s. 6d. per week.

Having previously been a prisoner for debt, Robert Atcherley Taylor was not in a position to pay for his ‘removal’ from the Common side of Newgate. There, he slept – uncomfortably – on a barrack bed, which was “merely a part of the floor of the room raised in a sloping direction, about six inches above the remainder, with a ledge a few inches higher for the head to rest upon”. Prisoners were issued a single rug to lie on, but were allowed to take in their own bedding if they had any, so long as it was not of straw. 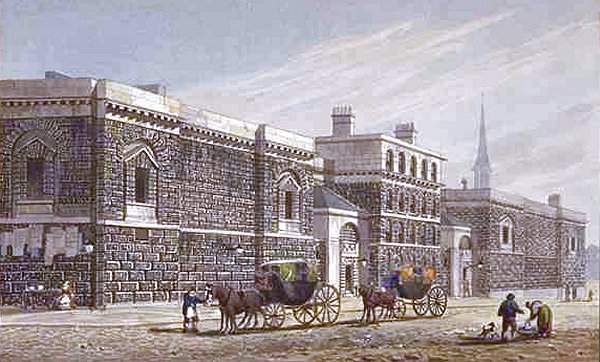 Robert remained at Newgate for several months, during which time at least two letters were sent to officials at the Home Office regarding his fate, one by an Archdeacon Corbett, and the second by Robert’s father, the Rev Robert Taylor. When I finally managed to decipher the handwritten replies which were sent (and it appears that it is only the replies which have survived) I was, to say the very least, surprised. The letters from the Archdeacon and the Reverend Taylor were not appeals for clemency. On the contrary, if my reading of the responses to their missives is correct, both men wanted assurances that Robert Atcherley Taylor would be transported!

Both of the Home Office letters were sent from Whitehall by a Mr Beckett, on behalf of “Mr Secretary Ryder” (Richard Ryder, the Home Secretary). I believe the first, sent to Archdeacon Corbett on 13 November 1811, ended with an assurance that the Archdeacon’s wishes would be complied with, by sending “the Convict in question” (already referred to as Robert Atcherley Taylor) to the Colony of New South Wales, “pursuant to his sentence.”

The second reply, dated 27 January 1812 and addressed to Rev Robert Taylor, I found rather more legible and I will quote it in full (with the warning that my transcription may not be 100% accurate):

I am directed by Mr Secretary Ryder to acknowledge the receipt of your letter relative to Robert A Taylor a Convict under Sentence of Transportation in the Gaol of Newgate and to acquaint you in reply thereto that Mr. Ryder enters very sensibly into the feelings which you have expressed respecting the Prisoner, and will not fail to direct his removal to the Hulks from Newgate in the coming few days, and furthermore he will be sent to New South Wales by the first opportunity.

One interpretation of this correspondence is that Robert’s father, and the Church, took the view that seven years in the Colonies would be good for Robert’s soul: he would have plenty of time to contemplate the error of his ways and repent his sins. A less generous reading of the situation is that Robert Atcherley Taylor was regarded as an embarrassment by both his father and the Church, an embarrassment which was best removed as far away from the public’s attention as possible.

Robert’s transfer to the prison hulk Zealand, at Sheerness, took place on 27 February 1812. A Select Committee report dated 27 June 1812 shows that prisoners aboard the Zealand were confined to three decks of the ship. During the hours of darkness the prisoners were locked down within their decks and left to their own devices, with no officers or guards to control them. Over the winter months this period of lockdown could account for as much as two thirds of each day. For Robert, those nights must have been very long indeed.

After the hatches were unlocked in the mornings, a proportion of the prisoners were, after breakfast, sent ashore to labour in the dockyard. The above-mentioned Select Committee report stated:

… the number sent on shore from the Zealand necessarily depends upon the demand made from day to day by the officers of the Dock-yard at Sheerness, there not being regular employment at present in that yard for more than about 200 out of about 500, which that Hulk generally contains; but there does not appear to be any precise rule by which the Captain determines which individuals shall go on shore, or settles who shall do the ship’s duty.

The convicts all dine on board the Hulk, and those who have worked on shore before dinner are replaced afterwards by those who remained on board during the former part of the day, unless more are wanted than can be supplied from the latter description, in which case some of those who have been employed at the easiest work on shore are sent again to make up the number required.

The Captain says, that he takes those for work on shore in the morning who come forward, and that they in general prefer going to labour in the morning, that they may stay on board in the afternoon. The convicts in the ship, with the exception of a few shoemakers and tailors, employed in keeping the shoes and clothes of the others in repair, and of those engaged in the ship’s duty, are allowed to be idle, or to work for themselves at their pleasure …

Chaplains were also employed to “to read Prayers and preach a Sermon every Sunday throughout the year, and On Christmas-day and Good Friday, in the Chapel on board”. The Zealand’s Chaplain would spend a fortnight at a time on board the hulk, during which time he would attempt “to reclaim the convicts, by conversing with them, and giving them good advice”. I wonder whether he got to talk to Robert Atcherley Taylor? I also wonder whether Robert was one of the prisoners who “occasionally taught others to read and write.”

The Zealand’s Quarterly Book shows that Robert received 23 days of victuals (covering the period from 27 February to 31 March) and was provided with the following items of “cloathing”: one jacket, one waistcoat, one pair of breeches, one pair of stockings, two shirts, one handkerchief, one pair of shoes and one hat. Another 21 days of victuals were allocated from 1 April, along with an additional pair of breeches and also of stockings. After 21 April, it is likely that Robert was on the move – and heading for his next ship.

Robert Taylor, convicted on 23 September 1811 at Middlesex Sessions of the Peace, appeared in an “Account of Convicts delivered on board the Indefatigable”, “on or about the 9 Day of May 1812”. This was the vessel which would take him on the long voyage to the colony of New South Wales.

The Indefatigable sailed from England on 4 June 1812 carrying 200 male prisoners, and was accompanied by the Minstrel, with 126 female prisoners on board. Nearly five months later The Sydney Gazette and New South Wales Advertiser reported:

These two vessels arrived at Rio Janeiro the 29th of July, and found there the Archduke Charles, from Ireland, with 150 male, and 50 female prisoners for Port Jackson.

The three vessels sailed in company from Rio the 11th of August last, but the Archduke Charles separated the day following, and may shortly be expected.

The Minstrel and Indefatigable kept company till the 7th of August, and then separated in a gale of wind.

While the Minstrel was bound for Port Jackson (now Sydney Harbour), the Indefatigable was headed for Hobart Town. She reached that destination on 19 October, having lost just one of her cargo of convicts en route (who was “killed by the accidental explosion of a musket”). 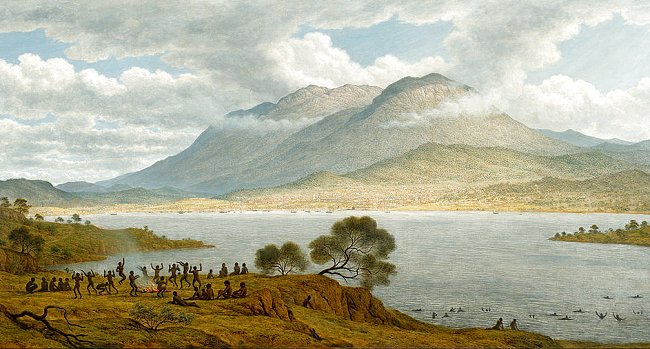 Robert Atcherley Taylor had finally arrived in Van Diemen’s Land. Back in England, his father was perhaps praying that a few years spent on the other side of the world would change Robert for the better, and return him to the path of righteousness. If so, his prayers were to go unanswered.