A death sentence would, in most cases, bring a person’s life story to a rather unpleasant end – but not in the case of Robert Atcherley Taylor! [

] The judgement of death initially recorded following Robert’s conviction in Sydney for “obtaining money under false pretences” was not carried out. Instead, his sentence was “Commuted to 14 years and hard labour in Chains”.

As had happened back in England following his original conviction for a fraud in 1811, after the Supreme Criminal Court in Sydney had passed judgement in 1827 Robert was transferred to a prison hulk. From there, he was sent on a voyage of almost a thousand miles, to what must have been the British Empire’s remotest – and harshest – penal colony.

Norfolk Island was described by one author as “a place of punishment and safe-keeping for… the worst class of offenders—men of desperate and almost irreclaimable character”. When the advisability of retaining Norfolk Island as an “ultra-penal settlement” was considered in 1848, it was recommended that it was kept “as the severest punishment, short of death, for any criminal.” This was the place which was set to be Robert’s home for 14 years.

Among the few official records I have found relating to Robert’s time on Norfolk Island is the 1828 census of New South Wales. This shows Robert Taylor, of the Indefatigable, arrived 1812, district of residence “Norfolk Isl’d”. There is also a duplicate Certificate of Freedom for Robert, issued on 28 December 1830, which has a note written across it stating that the certificate was “Cancelled before Signing it having been discovered that Taylor was transferred to Norfolk Island by the Supreme Court Sydney 3d Sept 1827 for 14 years, where he is now”.

Robert was present on Norfolk Island in January 1834 when some of his fellow convicts attempted a rebellion. This failed, and 22 of the prisoners were executed. The settlement’s Commandant, James Morisset, left the island and was replaced, in March 1834, by Major Joseph Anderson. Among the changes Anderson brought about on Norfolk Island was the delivery of religious services to the prisoners – by two of their own. According to George William Rusden’s History of Australia:

Anderson discovered amongst his subjects two prisoners educated respectively for the ministry, in the Churches of England and Rome. He astounded them by proposing that they should be themselves ‘placed in a position fit and encouraging for repentance,’ and do what they could for the good of their fellows.

The prisoner “educated for the ministry” in the Church of England was none other than Robert Atcherley Taylor, and the story of how he became a convict-chaplain was told in more detail in the Sydney Truth of 19 February 1922. An article entitled “Norfolk Island in Major Anderson’s Time” referred to Anderson’s assertion that “no clergyman could be induced to reside on the island” and described, in the Major’s own words, his solution to that problem:

In my office there were two or three large manuscript books, very properly called ‘record books’, for in them was written the name of every convict on the island, with columns showing his first, last and all known crimes and sentences—all and everything previously known about him. I was in the habit of studying these books often during my leisure hours, and one day I made the discovery that a prisoner of the name of Taylor had been a chaplain on board a British man-of-war before he was transported for forgery. Soon after I found that man named Sheahan had been educated to be a Roman Catholic priest. …

I first sent for Taylor, then for Sheahan, and spoke to them both very seriously. I informed them that I had discovered from the register their former history; what they had been and what they had been sent here for. I solemnly added that it was never too late to mend—to repent—to use their best endeavors for their own and others’ good. I then observed that our present method of keeping the Sabbath holy, and with any reverence or benefit, appeared to amount to nothing, to be almost a sinful mockery in fact. But as I now knew their former profession and capacities, I thought that with the help of God and their earnest prayers for pardon and grace to amend their lives, they might do much to improve our present conditions; to show, at least, that we had some sense of spiritual duties, and a desire to worship God publicly as best we could.

I then told them that I would take upon myself the responsibility of building and fitting up for them temporary places of worship, with a pew for myself and superintendents to attend occasionally, if they would undertake to perform the services of their respective churches twice every Sunday to the prison population; that I would remove them from the barracks, and build them separate huts, giving each a well-behaved convict to wait upon them.

They were both delighted and promised with God’s help to do their best. I said, ‘This must not be hurried; I will give you a week to think it over, and to commune in your own hearts’. They soon returned with many expressions of gratitude, earnestly urging me to give them a trial. I did so, giving immediate orders for completing the necessary accommodation. This was soon done. On the following Sunday the whole of the convicts were marched to their different new places of worship, where Taylor and Sheahan officiated with the usual morning prayers and a sermon. 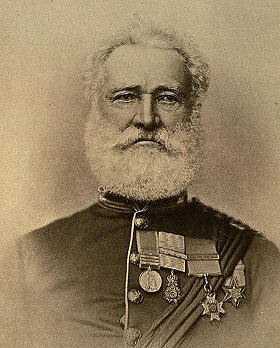 Major Anderson (pictured right) attended the services of his convict chaplains occasionally and was “much pleased”. He said he felt “that if I could but shut my eyes and forget by whom I was surrounded, I should at once say that I had seldom marked a more quiet and attentive congregation.”

Robert’s ministry was also witnessed by two Quakers, James Backhouse and George Washington Walker, who visited Norfolk Island from 4 March to 29 April 1835. On Sunday 8 March they accompanied Major Anderson to the congregation of Protestant prisoners, and observed:

The prayers, &c. of the Episcopal Church were read by a prisoner, who is said to have been brought up as a minister of that denomination of Christians. He delivered a very appropriate address, or sermon, including an uncompromising denunciation of sin, and an exhibition of the hopes of the gospel. Were his own life an exemplification of the efficacy of the doctrines he preaches, and his mind so kept under the influence of the Holy Spirit, that the baptizing power thereof might freely accompany his ministry, much good might be expected from his labours. I would not be understood to intimate that no benefit results from them, nor yet that the man does not in some degree feel what he preaches; and he honestly acknowledged, in the course of his address, his own want of proper conformity to what he so strongly urged as necessary for himself and others. The same individual also reads prayers in the jail, and in the hospital, on First-days, and he attends to the opening of the Protestant adult school.

One week later the Quakers attended the congregation of the Protestant prisoners once more. Backhouse wrote that the prayers were read “by R. A. Taylor, whose sermon was on the necessity of the influence of the Holy Spirit, and contained evidence that he is not a stranger to the principles of spiritual religion. Taylor says, that in a former part of his life, he preached different doctrine, not founded on Scripture, but that he did so in ignorance and darkness.”

Robert’s sermons do seem to have a positive impact on some members of his captive congregation. In 1836 The Colonist, in Sydney, published some lines of poetry, prefaced as follows:

The following lines will be read with interest when it is known that they were written at Norfolk Island by a convict named John Walton, the ringleader of the prisoners who, some years ago, piratically seized the Lady Wellington and carried her into the Bay of Islands, where they were discovered and the vessel retaken by Captain Duke; the lines were addressed to another prisoner named Robert Taylor, who had formerly been a chaplain in His Majesty’s Navy, and who has been officiating in that capacity at Norfolk Island to his fellow-prisoners for some years, but the period of his probation there having expired, they were sent to him prior to his departure.

ERE you depart, receive this compliment,
‘Tis due, and in sincerity I tend it,
It may be some encouragement to find,
The many anxious hours you have spent in contemplation
Have not been spent in vain, the Scripture says
The heavenly angels pleased, announce their joy
Whene’er a sinner truly seeks his God! …

Although he had been sent to Norfolk Island for 14 years, Robert Atcherley Taylor left that place after serving less than ten. Major Anderson’s ‘church movement’ had been a success, to the extent that real clergymen were willing to accept appointments on the island. As a result, Robert – along with Sheahan – was recommended for a commutation of sentence.

Both men were also paid one shilling per day each “for the good work they had performed”, for the whole of the period they had acted as chaplains. Which meant that Robert was once more a free man, and had some money earned from honest work.