Released early from a 14 year stretch on Norfolk Island, which had itself replaced a sentence of death, Robert Atcherley Taylor [

] returned to Tasmania. His many months of good work as a convict-chaplain, which had won him his freedom, also served to prepare him for life on the outside. He was ready to go straight. By which I mean, straight back to swindling anyone gullible enough to be taken in by the well-practiced persona of Parson Taylor.

The first indications that Robert had returned to Tasmania, and to his old ways, surfaced in December 1836. Hobart’s Colonial Times reported the following complaint, made to Hobart Town Police on the 23rd of that month:

A gentleman complained of having been cheated and defrauded by a man who called himself Taylor, who turned out to be a man well known in this Colony among the old hands, by the appellation of Parson Taylor. It appeared he had lately come from Sydney, and introduced himself to Mr. Bent and others, and among the rest to the complainant, as having been employed by the Bishop at Sydney to inspect the schools in this Colony, and by his plausible manner obtained of the complainant credit and money to the amount of forty pounds, and then took his leave for Launceston.

The clerical appearance of the sham parson induced complainant to give him a letter of introduction to a friend at Launceston, of whom by producing a forged letter or order purporting to have been written by the complainant the sham parson had got ten pounds. Complainant now prayed for justice, and his statement was taken in order to be forwarded to Launceston to stay the Taylor’s proceedings. 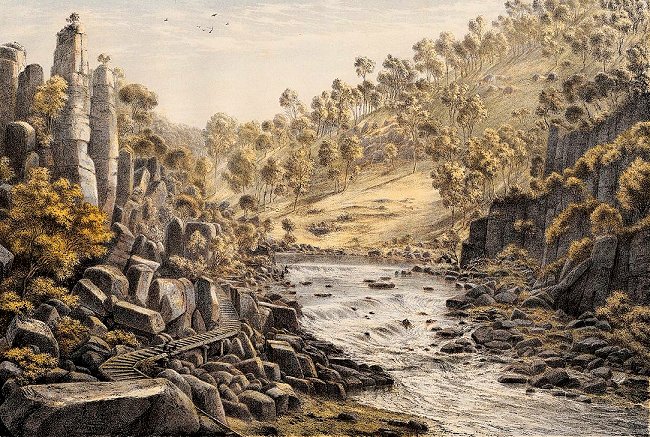 This complaint prompted the Police Magistrate to issue a warrant for Robert’s commitment to Gaol, to await his trial. The warrant, dated 14 February 1837, was addressed to the Chief District Constable and to the Keeper of the Gaol at Launceston and stated:

Unfortunately – for everyone except Robert – this warrant proved to be insufficient when the subject of its directions appeared at the Supreme Court about two months later. Launceston’s Cornwall Chronicle of 19 April 1837 reported that “A notorious fellow named Taylor, commonly called Parson Taylor, (from the circumstance of his practicing his swindling propensities under the garb of religion), was discharged by proclamation, when placed at the Bar of the Supreme Court for trial.” Extracts from the warrant then followed, and the newspaper indignantly concluded: “The reader will not find in the above any order to arraign the parson at the Bar of the Supreme Court.”

The long arm of the law did eventually take a more secure hold of Robert Atcherley Taylor. He appeared at the Launceston Quarter Sessions of 31 August 1837 and was found guilty of obtaining £10 under false pretences (“by means of a Counterfeit letter”) from former convict Britton Jones. Even then it seems that doubts were expressed in some quarters regarding the legality of Robert’s conviction, although the Cornwall Chronicle was confident that justice had been done:

The man, called Parson Taylor, was tried at the Court of Quarter Sessions last Thursday, upon a charge of swindling, and sentenced to seven year’s transportation. Some people doubt the legality of putting the man upon his trial. We have no doubt about it. The Chairman of the Court is not likely, in our opinion, to err in his judgement; at all events there is no doubt of the man’s guilt—and should he escape, through being placed illegally upon his trial—from the punishment due to the particular crime he was charged with, he will be committed to take his trial upon other charges of a similar nature—that can be satisfactorily proved against him.

We would rejoice to see this Parson Taylor well punished, because his swindling has been carried on under the cloak of Religion!

It appears that Robert served much of his seven year sentence at Port Arthur. He was recorded there in a convict muster taken on 31 December 1841. It is also from that year that entries in the Conduct Register for Robert include several references to Port Arthur – and at least five occurrences of the word ‘Misconduct’.

The punishment meted out for Robert’s misbehaviour ranged from solitary confinement (for 24 hours in one case, and seven days in another) to “Six months hard labor on the Roads” and even a full 12 months hard labour. These must have been very dark times for Robert Atcherley Taylor, although it has to be said that he was used to living through such times and in most if not all cases he had only himself to blame for them. It was not as if he was unaware of the consequences his actions would bring!

Thankfully, brighter days were to come for Robert. It appears that on 1 January 1844 he received a Ticket of Leave, which would have allowed him a degree of freedom (he could work for himself but had to remain within a defined area, report regularly to the local authorities, and attend church services). Even better news came in the form of a Government Notice, issued by the Colonial Secretary’s Office on 24 July 1844, which began:

The periods for which the undermentioned persons were transported expiring at the date placed after their respective names, Certificates of their Freedom may be obtained then, or at any subsequent period, upon application of the Comptroller-General of Convicts, Hobart Town, or at that of a Police Magistrate in the interior.

There followed a list of convict ships, with the names of some of those who had been transported on them given beneath one. The only entry under Indefatigable was “Robert A Taylor, 31st August”. Robert wasted little time in obtaining his Certificate of Freedom, which was dated 4 September 1844.

Natives on the Ouse River

Free once more, it appears that Robert at last saw sense and settled into a way of life which was very unfamiliar to him: that of an honest man. He settled at Ouse Bridge, in the Tasmanian county of Cumberland, where he became master of the children’s school. It was recorded that Robert “exercised the duties of his office in a most able and creditable manner”.

It was at Ouse Bridge, on 31 December 1845, that Robert, in another departure from a path which he had followed for so many years, got married – at the age of 61. His bride was a widow by the name of Ann Gilkes. Ann was almost certainly the Ann Clarke who married Elijah Gilkes at New Norfolk in Tasmania on 12 May 1834; she was a widow then too. I have been unable to find out more about Ann’s life prior to her marriage to Elijah, or her fate after she wed Robert.

But what of Robert’s fate? A man who had spent most of his adult life weaving a web of deceit and paying heavily for his crimes, he was now free and employed in a position of great trust. How long could that last? The answer is “not long” – but the reason for this, which you will discover in the following statement, is probably not the one you were expecting.

George Chadwick being Sworn States I am a Constable in the Hamilton Police. On Thursday morning the fifteenth day of October Instant between Eight and Nine O’ Clock I was near to the Ouse Bridge on this side. I saw Robert Atcherley Taylor come on to the Bridge on horseback. I saw the horse stumble and Taylor struck it with a stick and immediately the horse and Taylor fell over the Bridge into the water. I called out for help and ran near to the bridge and on the edge of the water and saw Taylor swimming to the opposite bank which he was unable to reach and was carried down by the force of the stream. He was under the water several times for about one hundred yards, when he called ‘I am going’. A man at this time jumped into the water but was unable to get hold of Taylor, he was still washed down sometimes under and sometimes above the water. Another man jumped in and caught hold of Taylor but could not hold him and the stream washed him about five or six hundred yards further down his face being under water, another man jumped in and pulled Taylor to the side and pulled him out of the water. …

Constable Chadwick’s statement was given in evidence on 16 October 1846 at the inquest into Robert’s death, which had occurred the previous day. The jury’s verdict was that Robert had lost his life due to suffocation and drowning in the River Ouse, into which he had been precipitated by accident and misfortune. What a dramatic and tragic ending to the story of Robert Atcherley Taylor – a fraudster who cheated himself out of many years of liberty, a teacher who never learned his lesson until very late in life, and a pretended parson who, in the end, saw the light and redeemed his soul before he went to meet his maker.