< Back to John Atcherley, draper of Shrewsbury. 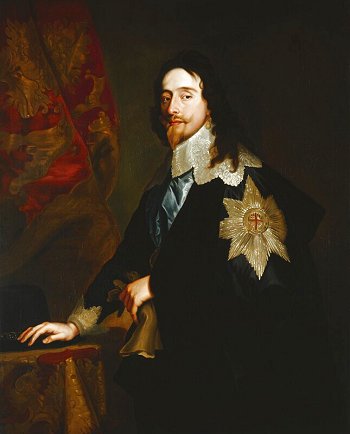 On 20 September 1642, King Charles I and his army entered Shrewsbury – a relatively safe haven in a country which had, at least in part, turned against him. Shrewsbury Castle had been hurriedly prepared for military use, and Charles took up residence in the nearby Council House. His troops were billeted in the homes of the townsfolk, where members of his retinue were also accommodated. Charles was joined in Shropshire’s county town by his sons, Charles and James, by Prince Rupert, and by a number of supportive noblemen and gentlemen. When the king departed he left behind a Royalist stronghold, the residents of which would suffer in various ways as the English Civil War progressed. Among those residents were John Atcherley [

Roundheads (Parliamentarians) or Cavaliers (Royalists)? Some people knew where their loyalties lay long before the civil war began. The war arose from a dispute which had lasted for over 30 years, between the Stuart Kings (James I, followed by Charles I, who both believed they had a divine right to rule) and Parliament. It will probably come as no surprise to find that the royal finances were a major factor in this ongoing disagreement, although religion also played an important part. Things came to a head in 1642, when the long-running battle of wills finally led to armed conflict.

It was in January 1642 that Charles I, backed by a force of 300 soldiers, went to Parliament intending to arrest the five members of the House of Commons who were his biggest critics. He did not succeed. Having been forewarned, the infamous five (as Charles might have viewed them) made good their escape. Charles had now ‘upped the ante’ to such an extent that he feared for the safety of his family and retinue. Leaving London behind him, Charles headed north.

So, Roundheads or Cavaliers? With negotiations between King and Parliament failing to reach a conclusion after a period of several months, and the prospect of war looming, towns and cities began to declare for one side or the other. Although at this stage much of the country was neutral, many English cities supported the Parliamentary side while rural areas like Shropshire tended to favour the King.

An invitation from Francis Ottley (giving an assurance that Shrewsbury was at the King’s devotion), and recognition of the town’s strategic and secure location, lay behind Charles’s decision to take up temporary residence there in September 1642. He had by that time raised his royal standard, thereby signifying the opening of hostilities between himself and Parliament, at Nottingham Castle (on 22 August). En route to Shrewsbury from Staffordshire, Charles stopped at nearby Wellington where he declared that he would uphold the “Protestant religion, the laws of England, and the liberty of Parliament.”

Although the King and his army received a warm welcome on their arrival at Shrewsbury, in truth Salopian support for the Royalist cause was far from universal. Some time before the King’s visit, local lawyer Thomas Hunt sought to raise a militia to fight for Parliament, and on 16 July 1642 a group of Shrewsbury alderman petitioned Parliament to recognise that force. Parliament authorised the training of militia for Shrewsbury’s defence, and tasked three Shropshire MPs with the establishment of its military control of the county. Contributions of money, silver plate, horses and arms were then provided by Drapers’ Company of Shrewsbury – an influential trade guild of which John Atcherley was a member.

Was John Atcherley a Parliamentarian, like many other members of the Drapers’ Company? Even if he was in fact a staunch Royalist, it seems likely that some of the King’s many supporters in Shrewsbury would deem him guilty (by association) of disloyalty. As we will soon see, this may actually have happened a few months after the King left the county town. 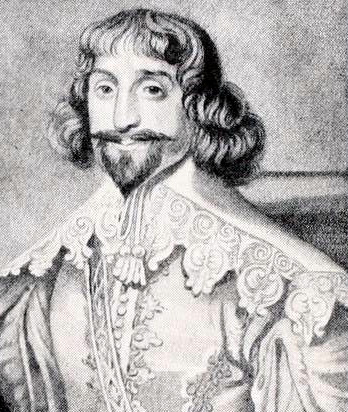 Charles I’s departure from Shrewsbury took place three weeks after his arrival. During his time in the town the King established a mint, recruited more soldiers, raised money, and solidified support by honouring his most loyal and influential subjects. One of those subjects was the aforementioned Francis Ottley (pictured left), the man who invited Charles to the town: Francis was knighted by the King and made ‘Commander of Arms’ for Shrewsbury. The following gives an indication of the zealousness of his service (just imagine being a resident of Shrewsbury, like John Atcherley, at this time):

The King quitted Shrewsbury on the 12th of October, since which date Sir Francis Ottley had made such vigorous use of his military command that he had secured a complete ascendency over all the discontented element in the town. The following is the form of protestation imposed by him on many hundred inhabitants of the town on the 2nd of January, 1642-3, and such as refused were threatened to be killed: ‘I. A. B., do in the presence of Almighty God protest and acknowledge without any mental reservation that I do detest and abhor the notorious rebellion which goes under the name of the Parliament Army, and will with my whole force and means to the uttermost of my power withstand their impious rebellion against our most gracious Sovereign Lord King Charles, our Protestant religion, our laws of the land, our just privileges of Parliament, and liberty of the subject.’

As the King’s right-hand man in Shrewsbury Francis Ottley became a central figure to whom many wrote regarding the progress of (and setbacks to) the Cavalier cause, and war-related matters pertaining to the town and county. The letters he received survived to give historians a unique insight into these affairs. One of his regular correspondents was Edward Hyde, first Earl of Clarendon, a trusted adviser to the King and part of the monarch’s retinue. He had accompanied Charles I to Shrewsbury and, following the Battle of Edge Hill, went with his majesty to stay at Oxford. It was from that city, on 31 January 1642-3, that Edward wrote to Francis (who had by that time been appointed Governor of Shrewsbury by the King) as follows:

Sir
I am desyred by my old Landlord Mr. Acherley to write to you in his behalfe, it seems he hath been threatened by some ill neighbours and so fears he may suffer by misinformation, he says he’s very innocent and will always continue so, and indeed hath made so many protestations to me, that I believe him. I do therefore desyre you that you will not let him suffer by any general imputation without good proofe: The King relyes much upon your diligence and interest in these unlucky tymes. I hope you will speedily receive such assistance, as will put new life into your parts.
God send us peace
I am Sr your very affectionate servt.
Edw: Hyde.

The above transcription of Edward Hyde’s letter (produced by William Phillips and published in the Transactions of the Shropshire Archaeological and Natural History Society in 1894) reveals that Edward lodged with John Atcherley and his family when King Charles and his followers were in Shrewsbury. It also shows that John’s loyalty to the King was doubted by some of his neighbours and that he was threatened by them as a result. But is the transcription accurate?

There are grounds for doubting that Edward Hyde’s “old Landlord” was actually Mr Acherley, and not solely because William Phillips identified him, in a footnote, as “Mr. Atcherley, the Head Master of Shrewsbury School” (James Atcherley was not born until 1730!). The question arises because of an earlier transcription of Francis Ottley’s letters, by “G. M.” of Shrewsbury. Although GM also identified Edward Hyde’s landlord as “Mr Acherley”, his footnote stated: “So read by the historians of Shrewsbury […], but I believe the name in the original to be Asterley.” 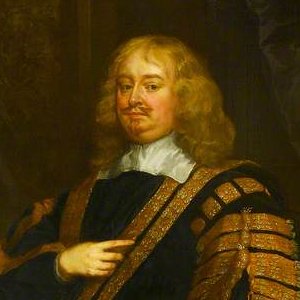 Without seeing the original letter myself I am unable to say whether Edward Hyde (pictured right) resided with Mr Acherley or Mr Asterley. (Has the letter survived? Is it part of the Pitchford Hall (Ottley) Papers held at the National Library of Wales?) Either way, the correspondence gives an indication of the atmosphere that existed in Shrewsbury at this early stage of the Civil War. Even if John Atcherley and his family were not on the receiving end of threats from “ill neighbours”, they were probably very much aware of the potential consequences of supporting the ‘wrong side’ – or of being suspected of doing so.

Some of the letters sent to Edward Ottley were from ordinary citizens, concerned about the impact of the civil war on the trade they were engaged in. John Birch of Bristol wrote on 28 January 1642/3, complaining that four “butts of Sack” which he had sent to Shrewsbury had been seized or stopped on the grounds that he had “taken up Arms against the King which God forbid”. There being “free trade intended between Shrosbury and Bristoll”, the Mayor and Colonel Essex had promised to “make good the 4 butts at 16£ a butt”, however it was thought that Mr Birch should write to Ottley “to know your pleasure and if you wou’d be pleased to lett my wines be disposed off”.

Another letter, sent from Oxford on the 29th of the same month on behalf of the King himself, related to William Jolley of Leek in Staffordshire. William’s goods, some packs of wool, “were staid in Shrewsbury, upon pretence or information that he had had shewed himself disaffected in our Service”. William having satisfied the royal Court at Oxford that his loyalty was not in question, Edward Ottley was required to release the packs of wool and deliver them to their rightful owner.

July 1643 saw two developments relevant to the traders of Shrewsbury which may, directly or indirectly, have affected John Atcherley’s business as a draper. The parliamentarian committee of Coventry, reacting to the taking of carriers from their city by royalists, seized goods from Shrewsbury in the hope of halting Salopian trade. Then, on 17 July, the King outlawed all trade from the provinces to London – reversing his proclamation of June 1642 granting free passage to people and goods throughout the Kingdom. In October 1643, Charles went further and forbade trade in the other direction, from London to the provinces. The precise impact of these measures is difficult to ascertain. One the one hand enforcement was often lax, on the other hand local commanders on both sides often seized goods passing through the areas they controlled – or levied tolls for their safe passage.

Overall however, trade was hampered by the war. In the words of historian Ben Coates: “Evidence from around England and Wales shows a major decline in internal trade.” Thomas Mendenhall, writing specifically about the drapers of Shrewsbury, maintained that for these businessmen the Civil War was “truly catastrophic.” Mendenhall continued: “the course of war cut right across the flow of the trade from Wales over the Border through Shrewsbury to London. The Severn valley became a no-man’s land, Shrewsbury a bastion of the royalist cause, and North Wales a stagnant hinterland”. This is reinforced by a letter from Edward, Lord Herbert (most likely then living at Montgomery) to his brother Sir Henry Herbert. Dated 25 August 1643, the letter shows the state affairs not only in Wales but also in Shrewsbury where John Atcherley and his family were living – and most likely suffering in more ways than one from the restrictions on trade:

Wee are here almost as in great straits as if the warre were amongst us. Shrewsbury, which is our ordinary magazine, being exhausted of wine, vinegar, hops, paper; and pepper at four shillings the pound; and, shortly, a want of all commodities that are not native with us will follow, the intercourse between us and London being interdicted.

See also the references for John Atcherley, draper of Shrewsbury.