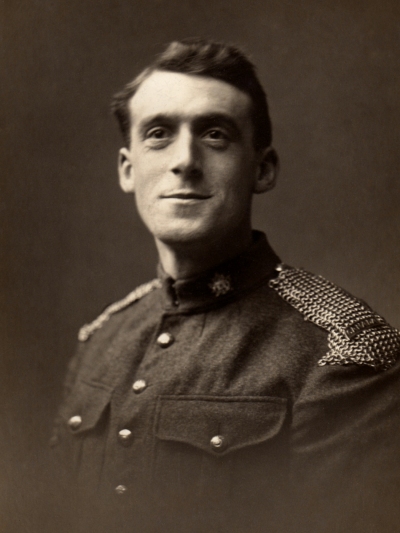 a good time to look at the life of an Atcherley who made Canada his home.

] was the second son of Thomas Cureton Atcherley and Anne Griffiths. He grew up with two older and two younger sisters, after his only brother (named Thomas Cureton Atcherley after his father) died when just 2 years of age. Along with older sisters Sarah Anne and Edith, and younger sister Florence Cureton, Charles (or Hedley as he was known to his family) was baptised at Bloxwich in Staffordshire on 14 March 1894. His youngest sister, Lilian Eunice, was born on 14 June the following year. [1, 2, 3, 4, 5, 6, 7, 8]

Hedley’s father Thomas was for most of his life a Police Constable in Staffordshire (see A policeman’s lot: Constable Thomas Cureton Atcherley (Part 1)), who had risen to the rank of Sergeant by the time of the 1911 census (when he was 51). Although Hedley chose to follow in his father’s footsteps, he did not do so by joining his local police force. Far from it. The passenger list for the Corsican, arriving at Montreal, Quebec, Canada on 26 April 1908 from Liverpool, England included a C Atcherley, aged 20, a grocer, born in England, destination Red Deer. Added above the word grocer were two more words showing the occupation the young immigrant was to pursue: Mounted Police. He joined the Royal North West Mounties on 24 May. [10, 11]

1911 also saw Hedley make a return visit to England. The passenger list for the Montreal, arriving at London on 9 June 1911 from Montreal, Canada included a large contingent of RNWMP corporals and constables, including Constable Atcherley. They were to form the Mountie contingent for the coronation of King George V, acting as part of the King’s royal escort. [6, 9]

On 24 September 1914 Hedley enlisted with the Canadian Over-seas Expedition. His attestation paper, a copy of which can be viewed on the Library and Archives Canada website, shows that Charles Hedley Atcherley was 5 feet 10 inches tall, with a chest measurement of 37 inches, and that he had brown eyes, light hair and fair complexion. It also gave his date of birth as 21 September 1881, a discrepancy of 8 years. [6]

Hedley transferred from the Royal North West Mounted Police to the Fort Garry Horse Regiment, which had mobilised on 5 August 1914 and had moved from Winnipeg, Manitoba to Valcartier, Quebec on 30 August, where it became part of the 6th Battalion, Canadian Expeditionary Force. The photograph above shows Hedley in his uniform. Notes written in pencil on the back of the photo record that he was at the Somme, and also describe two wartime incidents. The first was Hedley fell asleep in a shell hole while on guard duty in No Man’s Land; he claimed that he had heard noises and had remained to investigate until dawn. The second incident involved Hedley wearing an armband in order to get out of his camp for a “nite on the town,” an infraction which saw him sentenced to parade ground drilling with a knapsack full of sand. However an officer discovered that the knapsack was actually filled with straw! [13, 14]

The notes on the back of Hedley’s photo also make reference to another wartime incident which took place in 1916, and which is described in more detail on the Fort Garry Horse website (the information having been taken from the London Gazette [15]):

During an attack upon four lines of enemy defences, he pushed forward into our barrage and destroyed the enemy’s wire, took his party through the gap and established a block in the enemy trench to prevent counter-attack. His prompt and gallant action ensured a rapid passage of our main body into the enemy’s trench, and undoubtedly saved many casualties, as the enemy’s barrage opened on the wire immediately after our attacking party had entered the trench.

For his “conspicuous gallantry and devotion to duty” when in charge of the torpedo party, Lance-Corporal Charles Hedley Atcherley was awarded the Distinguished Conduct Medal. According to the notes on the back of his photograph, he was also granted a period of special leave to England to see his wife, Ethel. Hedley had married Ethel Marion Heather in 1914. The birth of the couple’s first child, Marigold Atcherley, was registered at Walsall in Staffordshire in the third quarter of 1916. Sadly, Marigold’s death was registered there in the same quarter. [1, 2, 7, 13, 15, 16]

A touching memento of Hedley’s wartime service can be found on the Memory Project website, which contains a small image and a transcription of a postcard that he sent to his wife Ethel. Hedley wrote [17]:

To My darling Wife,
I think it should be “happier returns” sweetheart. I love you still more today and more as the days go on dear. I ask God to grant us the happiness there was on our first day, this day one year ago.
Love Hedley XXXXX