Many members of the Atcherley family employed agricultural labourers. Some Atcherleys, on the other hand, were ‘ag labs’ (to use the abbreviation popular with family historians) or other types of farm workers (waggoners, for example). Finding records which shed light on the lives of these Atcherley ag labs has not been easy – but recently I discovered details of some inquests which were both interesting and illuminating.

The family of Henry Atcherley (born 1860, son of Henry Atcherley and Mary, née Jones) were involved in two inquests (or Coroner’s Inquisitions as they were also known). Both of these took place in the Shropshire village of Childs Ercall. At the first, held on 15 November 1895, one of the witnesses was Jane Atcherley [

], the eldest child of Henry and his wife Hannah (née Teece). The Wellington Journal reported:

Sad Burning Fatality.—An inquest was held yesterday (Friday), at Mr. J. H. Goodall’s, touching the death of his eldest child, Geoffrey Hughes Goodall. Mr. G. G. Warren was coroner, and Mr. J. C. P. Palmer foreman of the jury. […] Jane Atcherley, nursemaid in Mrs. Goodall’s employ, said she was in the nursery on Wednesday morning with the deceased and the baby. She went out of the room to wash a bottle, leaving deceased on a hearthrug near the fire. He had nothing on except his night-dress. When in the back kitchen, a few minutes after leaving the nursery, she heard screams of ‘Mother,’ and Mrs. Goodall went upstairs. Deceased said he thought a cinder had dropped on his night-dress. His age was seven years and ten months.—A verdict of ‘Accidental death from burning’ was returned. The Coroner and jury passed a vote of condolence with the bereaved parents.

The focus of the inquest was of course on the unfortunate victim. But within the report on the inquest (which I have abridged) there is information to be gleaned about Jane Atcherley, who was then an ag lab’s daughter aged 13. Girls of Jane’s status typically went into service, at least until they were married, and the census of 1901 shows that Jane (then 18) was at that time a general domestic servant in the household of Irishman Charles Clarke, a retired Army Captain, at Wistanwick in the parish of Stoke upon Tern in Shropshire. Now we know that by that time, Jane had already been employed in a domestic capacity (though not necessarily continuously) for more than five years. 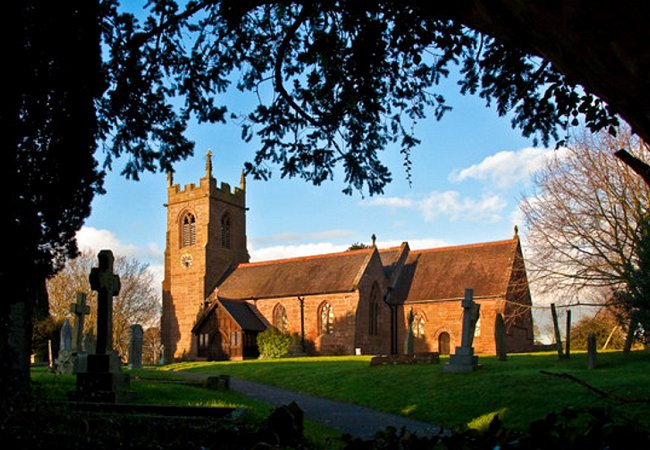 The second inquest to feature this Atcherley family was a lot closer to home. It was in fact held in their home. Hannah Atcherley was a witness – and her seventh child (and fifth son) George was the subject of the coroner’s inquisition. George Atcherley [

] was born at Childs Ercall, and baptised there in the church of St Michael (pictured above) on 4 October 1896. The record of that event confirmed that George’s father Henry was a labourer. His family would later move on from the village, but George Atcherley would not. He died there on 16 June 1898, and was buried at St Michael’s three days later. He was one year and nine months old.

Some time ago I viewed, and transcribed, the record of the Coroner’s Inquisition into George’s death. The document was a printed sheet, with spaces in which the words specific to the inquest were written. George’s name was initially written as John, but all three occurrences were crossed out and replaced with George. If you have never seen one of these documents, here is my transcription:

[In left margin:] Shropshire, to wit
An Inquisition taken for Our Sovereign Lady the Queen at the house of Henry Atcherley, Childs Ercall situate in the Parish of Childs Ercall in the County of Salop, on the seventeenth day of June in the year of Our Lord One Thousand Eight Hundred and ninety eight before GEORGE GORDON WARREN, Esquire, one of the Coroners of our said Lady the Queen for the said County on view the body of George Atcherley now lying dead, upon the Oaths of the several Jurors whose names are hereunder written and seals affixed, good and lawful men of the said County duly chosen and who being now here duly sworn and charged to enquire for our said Lady the Queen, when, how, and by what means the said George Atcherley came to his death, do upon their Oath present and say that the said George Atcherley on the 16th day of June in the year aforesaid, in the Parish aforesaid in a natural way and not by any means of violence did die.

The above was followed by the names of the jurors.

There are a lot of words in the above jury’s verdict, but no real insight into exactly how George died. Because the registration of George’s death was based on the Coroner’s certificate, George’s entry in the register (see extract above) was equally vague. It seems that (to quote the History House website) “the coroner was only really concerned with the detection of crime, so the medical reason for the death did not matter to him once criminality had been ruled out.” Details of how George met his end were recorded however, in the Wellington Journal’s summary of the inquest’s proceedings:

Inquest.—Mr. A. West, deputy coroner, held an inquest on the 17th inst. relative to the death of George Atcherley, the infant child of Hannah Atcherley. Mr. George Dunn was foreman of the jury. The evidence of the mother showed that two days previously the child was not well and vomited considerably. She did not however think the illness was very serious, or she would have sent for a doctor. The child died the following morning. Other evidence was given by Eliza Arkinstall and Dr. Exham, who said he had examined the body and considered that death was due to collapse consequent on the vomiting.—The jury returned a verdict of ‘Death from natural causes.’

What an incredibly sad story. Can we draw anything from this tale of infant death in the family of an agricultural labourer? Possibly, that these poor folk were poor judges of whether or not an illness was serious. Or maybe that their decision as to whether or not to call out a doctor, was influenced by their limited income? There was no suggestion of negligence on the part of Hannah Atcherley, but I suspect that she very much regretted her decision not to seek medical attention for George.

Henry Atcherley’s younger brother Samuel also appeared at an inquest, in 1893. Thankfully he was very much alive (he later fathered my maternal grandfather) and, like his niece Jane in 1895, was acting as a witness.

] married Mary Austin in the last week of 1887. After their wedding, Sam and Mary settled at Sidney (or Sydney), in the parish of Kinnersley (nowadays Kynnersley), where Sam had been born and was brought up. The census of 1891 enumerated the couple there on 6 April; Samuel, aged 28, was recorded as an agricultural labourer, Mary was 23 and her birthplace was Ellerdine (in the parish of Ercall Magna, where she was baptised on 22 March 1868). What the census did not show was that Mary was an expectant mother. Very expectant in fact, as her first child, Henry, was born the next day, on 7 April 1891 (he was baptised a month later on 10 May). 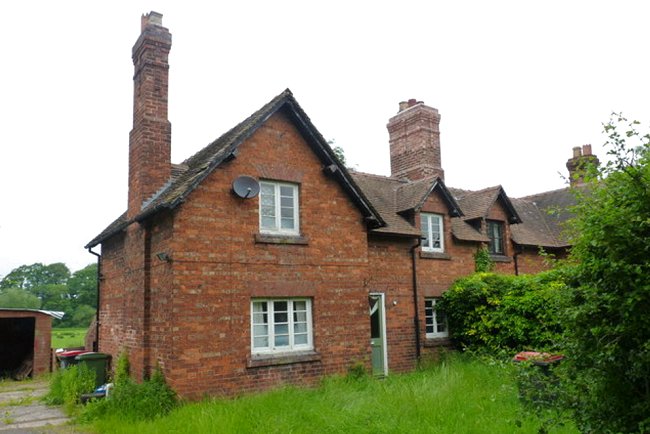 Within the next two years or so, Samuel and his family had relocated to Wappenshall, in the parish of Eyton (where they may have lived in one of the cottages at Wappenshall Farm which are pictured above). This I learned from the fact that daughter Fanny Atcherley was born there (on 24 September 1893); the record of her baptism showed that Samuel was a labourer. But who did he work for? Can we discover any snippets of information about the nature or conditions of the work he was engaged in? We can, from the following report in the Wellington Journal of 14 Oct 1893:

The Accident to a Waggoner.—The accident reported last week to a waggoner named George Casewell, in the employ of Mr. E. W. Bromley, terminated fatally on Monday last, although up to the previous Friday he appeared to be on a fair way to recovery. J. V. T. Lander, Esq., coroner, held an inquiry as to the cause of death at Mr. Bromley’s residence on Tuesday, and Mr. Bromley was foreman of the jury.—Ann Casewell, wife of deceased, said her husband was 64 years of age, and was a waggoner in the employ of Mr. E. W. Bromley, and she and deceased resided together at Wappenshall. On Friday, the 29th September, deceased went to his work, as usual, about ten minutes past six in the morning; and between 10 and 11 Samuel Atcherley went and told her that her husband had been hurt.

On going home she found him sitting in the armchair, and young Mr. Bromley was with him. Deceased told her that he had been working in the field, when a hard storm came on, and he had taken the horses under a tree to shelter, and whilst he was standing by their side one of them turned round and knocked him down, the result being that the harrows came upon him. Deceased said he was done for, and that it would finish him. Witness sent for Dr. Weston, and he attended to deceased. There was a wound on the left hand and arm, and on the right arm, and small bruises on the head and the right leg. Deceased seemed to get better, and went on well until Friday, when he got worse, and the doctor was again fetched. On Sunday he was taken very ill, and had been unable to take food. Dr. Weston said he was suffering from tetanus. Deceased gradually got worse, and died on Monday morning, about a quarter past seven. The cause of death was lockjaw, the result of the injuries he had received.

Samuel Atcherley, labourer, bore out Mrs. Casewell’s statement as to the cause of the accident, and said that when he went to deceased’s assistance he found one ‘spoke’ of the harrows had run in his arm and another in his leg. Deceased was dragged for about 50 or 60 yards, and there were bruises on the back of his head, his legs, and his arms.—The jury returned a verdict of ‘Accidental death.’