] (a.k.a. ‘Batchy’). Stories about the two (particularly Richard) are legion and often mix up the twins, which is perhaps not too surprising as the brothers themselves often used their similarity to each other to their mutual advantage. Here, I’m going to share some of my favourite anecdotes, culled from a variety of sources.

David and Richard both applied for the RAF at the same time in 1922, but David failed on medical grounds and joined the army instead (only to get himself seconded to the RAF later, and then have his transfer made permenant). In December 1958, Richard Atcherley amazed the graduating class of the RAF College at Cranwell with the following story.

“You are going to be passed out by a mountebank who never passed in,” Richard announced. He went on to say that on their first try for Cranwell, both he and David failed their medicals, he for weak eyes and David because of kidney problems. So two months later they tried again. “In a contingency of this sort,” said Richard, “there are obvious advantages in being twins. So when we returned, with very little subterfuge on our parts, the doctors got us completely mixed up. I passed in with flying colors on David’s eyes, and he on the strength and quality of my—er—more vulgar but nonetheless useful contribution.”

Richard therefore concluded that the ceremony he was overseeing was “as valid as a marriage in Las Vegas”!

From Air of Authority – A History of RAF Organisation (website).

Whilst at the Central Flying School, Wittering, [David Atcherley] and a fellow pilot were detailed to fly two airmen to Halton to participate in a tennis tournament. For the return flight, David made a typical Atcherley suggestion, that they see who could perform the most slow rolls between Halton and Wittering. Having completed over 100 in the 65 mile journey, he won comfortably but on arriving back at Wittering, their aircraft where covered in a film of oil thrown out by the gyrations of their flight. Their flight commander, Basil Embry, then pointed out to them the AOC was due to make an inspection the following day and that their aircraft had better be clean by then. Setting about the job themselves, they gracefully cleaned their aircraft and the following day had the two cleanest aircraft on display.

From Combat Report: The Story of a Fighter Pilot (1943) by Hector Bolitho.

The most startling pilot on the Air Force Station [in Transjordan], which was three miles away from the palace, was Richard Atcherley, whose fierce vitality and original spirit were all wrapped up in the nickname of ‘Batchy.’ He was tall and lean and so energetic that he always seemed to be walking one pace ahead of himself. […]

There were guest nights after which Batchy would lead us into almost criminal escapades. Tar barrels were hurled down hills. The notes from the mess piano were torn out, one by one, and Batchy would fling them into the valley. There was a conscientious little Met Officer who would spend the next day hunting for the missing notes all down the slope. It was amusing to see him searching for F sharp or A flat among the stubble. He would put them all back into the piano again with meticulous care, only to whet Batchy’s appetite for next guest night. Once, they tried to abscond in the Amir’s train which was getting up steam at the station in the valley. Nobody could work it, so they took a jigger instead and sped along the railway track towards Zerka, where the Transjordan Frontier Force were stationed. When the railway lines ended, they just forced the jigger over the sand until it arrived at the door of the mess. Batchy was the ringleader of it all. But behind his facade of practical jokes and attractive foolishness was an austerity of character which compelled one’s faith.

On David, Richard, and the unauthorised use of an airbase ambulance (1943)

On one occasion, in 1943, David Atcherley was flying home from North Africa for an important operational conference. The weather over southern England was very bad, and he had to be diverted to the only airfield that was still open, Portreath, in Cornwall. As was, and remains mandatory during flying, an ambulance and a fire tender were standing by the Air Traffic Control Tower. David, now going to be very late for his meeting, taxied in at break-neck speed, leapt out of the aircraft and into the ambulance whose engine was running, and disappeared in a cloud of dust towards the nearest main line railway station, Redruth.

The Station Commander was naturally furious. He addressed an indignant letter to Group HQ. It passed up the line to Command and to Air Ministry. The letter despatched a stern rebuke in writing to Air Commodore Atcherley; but unfortunately it was addressed in error to the other twin. Batchy hastened to reply:

I have the honour to acknowledge your letter of 23 November, whose sentiments I entirely endorse. To remove, without authority or permission, the emergency ambulance from an operational station, thus hampering the flying programme and imperilling the lives of crews already airborne is quite unforgiveable; and fully merits to the tone and content of your communication.

I have to inform you, however, that I personally was in no way involved in this incident. I can only presume the officer concerned may have been my brother, Air Commodore D. Atcherley.

I have the honour to be, Sir,
Your obedient servant
etc, etc.

PS. Personally, I always take the fire engine on these occasions.

David, on being awarded the Distinguished Service Order (1944)

From Mission Completed (1957), by Basil Embry (who had been David’s commanding officer).

The smoothest way to eternity is said to be by breaking one’s neck, a process often self-inflicted by those tired of life. Therefore, one of who survives an accidental broken neck should be regarded with awe. David Atcherley, later Air Vice Marshal, was being decorated by the King with the Distinguished Service Order. He had his arm in plaster and the King when talking to him said, ‘You must be careful, Atcherley, or you’ll be breaking your neck next time.’ David Atcherley replied, ‘I have already broken it three times, Sir.’ ‘You have broken your neck three times,’ said the astonished King. ‘Good Heavens! How did you do that?’ ‘The first time I fell off the piano on a guest night, Sir, the second time I fell of a horse, and the third time I flew into a tree at night, Sir,’ Atcherley said, grinning. 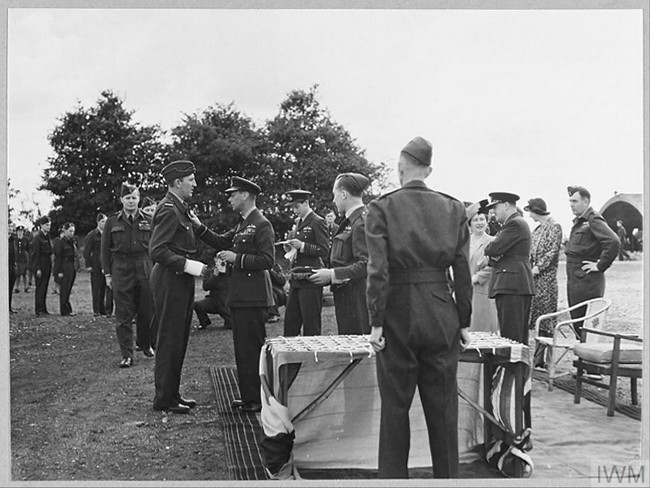 Richard on the possibility of war between India and Pakistan (1948)

A story [Richard] told me three weeks ago:—the scene was a Cabinet meeting in Karachi in 1948, the Pakistan and Indian Governments were very near to war. Dick and I were Commanders-in-Chief of the opposing two Air Forces. The heads of the Pakistan Army, Navy and Air Force were called into the Cabinet meeting to give their opinion whether or not India was about to declare war. The Soldier and the Sailor believed and said that, from the various movements across the frontier, war would happen at any moment. Dick was then asked his opinion. He said: “No, there will be no war yet, if there was to be war Tommy Elmhirst, a distant relation of mine, would have telephoned from Delhi to tell me so.” Mr. Liaquat Ali Kahn, the Prime Minister, laughed heartily and the meeting adjourned.

From Hetta and William: A Memoir of a Bohemian Marriage (2012) by Jacob Empson.

There was a second flight in a Meteor, organized of course by Uncle Dick [Atcherley]. Hetta and Pa had both come to take Mog and Jacob to Camberley […]. Again, the pilot had been instructed to do some aerobatic stunts, and Mog and Jacob were both sick. After the boys’ flight in the jet the family took off in the [De Havilland] Dove, with Uncle Dick at the controls, to fly to Yorkshire for a weekend with Uncle Arthur. Jacob was still feeling queasy after his time in the Meteor […] There was an incident to enliven the proceedings, though. Uncle Dick was rather taken with Hetta, and she with him, never being averse to a dashing aviator, and half-way through the flight, and having had a few drinks, she was standing with another one in her hand at the front of the passenger cabin with the door open to the flight deck, and said, ‘Why are we going to bloody Yorkshire? Why don’t you fly us to Brussels?’ Uncle Dick put the plane into a steep right turn, with the right wing pointing at the ground, taking her at her word. ‘No!’ she cried, hanging on to the door frame, and started pleading with him to stop. On this occasion she had met her match in being outrageous. …

Sir Dermot Boyle, Chief of the Air Staff, pays him public tribute. Again Sir Dermot rises to the occasion. “Dick Atcherley,” he pronounces, “was always known as a man prepared to fly anything anywhere, and — if I may say so — anyhow.”

David and Richard were gifted with great intelligence and incredible flying skills. They were also headstrong, unorthodox, a tad eccentric, prone to the occasional hight-profile gaffe, and possessed of a shared sense of humour which – as you have just seen – led them into many escapades. There was so much more to David and Richard and their contributions to the RAF however. Watch out for more stories about these two later this year.