“Mrs SARAH ATCHERLEY, gave by will Thirty Pounds, to the Poor of this Parish, the Interest to be given in Bread on Christmas Day for ever” — Benefaction table, Baschurch All Saints.

Christmas is a time for giving, and that is exactly what Sarah Atcherley [

] did through her will. Although she was referred to as Mrs Sarah Atcherley, this abbreviation for Mistress was originally used for both married and unmarried women. Sarah was, I believe, the daughter of John Atcherley and his wife Mary (Basnett), baptised at Baschurch All Saints on 28 July 1734 and buried there, aged 83, on 28 March 1818.

A report published in 1831 stated: “Sarah Atcherley gave, by Will, 30l. to the poor, the interest to be given in bread on Christmas-day … This sum is also in the Shrewsbury savings bank, and the interest, 1l., is given away in sixpenny loaves about Christmas-day.” It appears that by 1901 Sarah’s charity had been amalgamated with others to become “United Charities (Atcherley, Baker, Barnet etc.)”. Then, in 1991, charity 1004946 (Sarah Atcherley – United Charities) was removed from the Charity Commission’s register due to a further amalgamation. Hopefully Sarah’s bequest, in conjunction with other small charities established by gifts such as hers so long ago, is still benefiting people in need of support today.

], widow of Manchester silk mercer John Atcherley, moved to Leamington in Warwickshire after her husband’s death. There, she contributed to the Police Christmas Fund, her donations (along with many others) being acknowledged by the Chief Constable in the Leamington Spa Courier in 1888 (10 shillings), 1891 (10s. 6d.) and 1896 (10 s.).

The Mr. Atcherley referred to in the following report of seasonal giving (from the Manchester Courier and Lancashire General Advertiser of 31 Dec 1859) was most likely Richard [

], brother of John and brother-in-law of Sarah Atcherley née Barkley (though it may have been John himself):

Christmas was doubly observed in Manchester, as in most other places, in consequence of the great festival falling on Sunday. Business was almost entirely suspended on Monday, and the places of amusement were crowded both in the day and evening. The weather was mild and damp, and the streets were exceedingly dirty, in consequence of the thaw. The general prosperity and plenty, and the charitable deeds that are never forgotten at Christmas, made the chief holiday of 1859 an unusually happy one. Many ‘treats’ were given to the poor and employeés. Such as have come to our notice we record:—

A Christmas breakfast was given on Monday morning, by the kindness of numerous subscribers, to about 130 scholars of the Red-bank Ragged School, after which addresses were delivered by the Rev. J. Brown, B.A., Messrs. Jameson, Atcherly, and Councillor M’Dougall. … 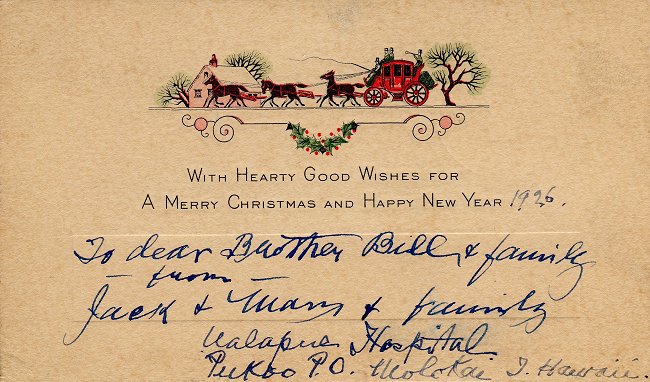 Since the mid-1800s, Christmas has also been a time for sending greetings cards to friends and family. Fellow Atcherley researcher Barbara Lang has a 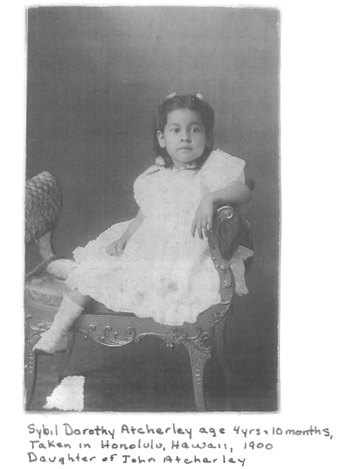 Christmas card (pictured above) which was sent by Dr John Atcherley [

] of Hawaii (son of the above-mentioned John and Sarah Atcherley). Sent in 1925, the card was “To dear Brother Bill & family from Jack & Mary & family, Ualapua Hospital, Pukoo P.O., Molokai I., Hawaii”.

]. The Pattersons had emigrated from England to Canada in 1908, and Lucy had passed away there, at Winnipeg, Manitoba, in 1924. For Christmas 1900, when Lucy and her family were still living in England, her brother John had sent her, probably in addition to a card, a photo of his oldest child, Lucy’s niece Sybil Dorothy Kuliaikanuu Pai Atcherley [

], one half of the famous (or maybe notorious) Atcherley twins of the Royal Air Force, combined photograph and card for Christmas 1940. Earlier that year he had landed, unannounced, on the deck of an aircraft carrier. His plane, a Miles Magister, was wrecked when it fell down an open lift shaft. A photograph of the wreckage was the picture that adorned his Christmas cards the following December. (See also David Atcherley’s World War Two – Part 1.)

The exchanging of Christmas greetings was not always easy for members of the armed forces serving during World War Two, and was virtually impossible for those held as Prisoners of War. Harold Atcherley [

], held captive by the Japanese at Changi in Singapore, made the following entries in his diary in 1944:

24 December 44 Christmas Eve. Great excitement, not over Christmas but because we are at last to be allowed to send a 25 word cable. The first batch is due to go off today and I hope to send mine the day after tomorrow. Not a bad effort. It has taken the Red Cross three years to fix this up.

25 December 44 Christmas Day. Greeted at 9.00 am by a breakfast consisting of a pint of porridge, and sweet coconut sauce, angel on horseback (fried fish on a biscuit) and soya bean bread with lime jam, ½ pint of coffee and tea. Everybody is in great form with much coming and going with people wishing each other a happy Christmas …

Harold noted that the men were in far better spirits than they had been the year before. For lunch on Christmas Day there was “taogay soup, sweet potato pie, adzuki bean pasty, vegetable pie, savoury tart, cheese savoury and a sweet.” A “terrific meal” which left Harold “quite defeated” followed in the evening. What a contrast to normal rations, and in particular to the pitiful diet Harold and so many others had been forced to endure while working on the ‘Death Railway’.

], who was serving with the Second Battalion of the King’s Shropshire Light Infantry when the Great War began in 1914 (see Samuel Atcherley’s World War One). Samuel’s Battalion, along with other units including Princess Patricia’s Canadian Light Infantry (PPCLI), formed the 80th Brigade, which arrived in France on 21 December. The officers and men of the brigade were then billeted at Blaringhem on the 23rd.

The PPCLI war diary includes the following entry for the first Christmas Day of the First World War: “Spent morning overhauling packing of transport. Unluckily Christmas comforts not available. Very fine in morning, then misty, cold, frost.” Though ‘Christmas comforts’ were not available, the war diary of 2 Battalion KSLI shows that “Every Officer, N.C.O. and man received a Xmas Card from Their Majesties the King & Queen” on Christmas Day. Then on Boxing Day “Every Officer, N.C.O. and man received Princess Mary’s Gift” – a special tin (pictured below) containing a small selection of gifts.

Christmas 1914 was however probably soon forgotten by Samuel Atcherley and the rest of 80th Brigade. From 27 December onwards the men were engaged in digging trenches – usually in the rain. 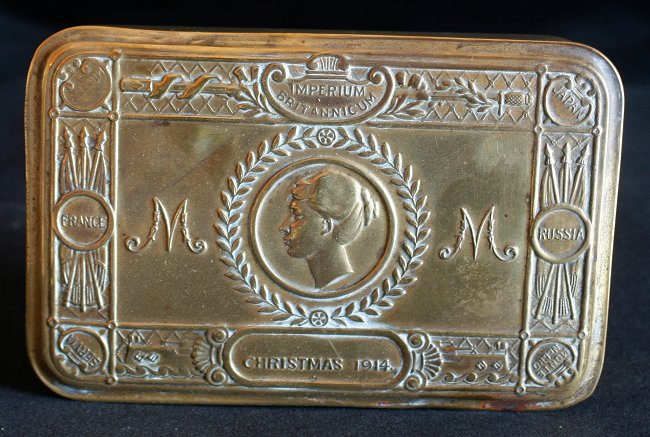 > On to Atcherleys of Christmas Past, Part 2