], an ironmonger by trade, moved from No 41 High Street, Wrexham, into a house and shop on the corner of Hope Street and Back Chamber Street. He remained there until at least 1721, and it appears that he bought the property as it remained in his family for two more generations, into the early 1800s. Thomas’s move to this address may well have been connected with his marriage, which probably took place either in 1700 itself or in the late 1690s. Note my use of the word ‘probably’ – I have yet to find a record of Thomas Atcherley’s wedding.

This view towards Wrexham’s town hall, though dating from the beginning of the 1800s, would probably have been familiar to Thomas Atcherley.

My estimate of the year of Thomas’s nuptials is based on the date of his first son’s baptism. This ceremony took place in 1701, not at Wrexham but on the other side of the Welsh border, at Baschurch in Shropshire. The register of All Saints church shows that “Richard ye son of Thomas Atcherley of Wrexam Iron-monger was baptized ye 12th day of August”. It appears that Richard was not only baptised but born in Baschurch parish, for the record of his admission to St John’s College, Cambridge University, in 1719, states: “Richard, son of Thomas Acherley, ironmonger (mercatoris ferrarii), Salop; born at Stannerdine near Shrewsbury”. ‘Stannerdine’ was of course Stanwardine in the Fields, the ancestral home of the Atcherleys. (For more on Richard [

], see Till he grew disordered in his mind.)

Although many of his forebears were born at Stanwardine, Thomas Atcherley was not. The youngest son of Richard Atcherley [

] and of Richard’s wife Susanna (née Brookes), his birth place was Wolverley in the parish of Wem. His baptism, at the parish church of St Peter and St Paul in 1672, was recorded thus: “Thomas the son of Susant Acherley widd. was Baptized the 14th day of July”. Thomas’s father Richard had been buried at the same church just over three months earlier on 6 April.

Richard’s last will and testament (in which his surname was throughout written as Atcherley, though he himself signed it as Richard Atcherly) was made on 3 April 1672. In it, Richard made various provisions for his “sone or daughter which is not now borne” including this: “there being one child unborne of my wife & if this child haptten to be a boy I leave that fiftey Pounds to bind him to Apprentes to A good trade”.

It seems that Thomas was apprenticed to an ironmonger, and pursued that trade once his apprenticeship was completed. Business, based on the evidence we have already seen, was good – not only was Thomas able to buy a property to house his family and his shop in Wrexham, he could also afford to send his first-born son to the University of Cambridge.

Four more children followed. “Martha ye daughter of Thomas Atcherley of Wrexam yeom.” was baptised at Baschurch on 9 August 1703; sadly, she died at the age of 8, and was buried at Wrexham on 30 Apr 1712. “Mary ye daughter of Thomas Atcherley of Wrexam Ironmonger” was also baptised at Baschurch, on 24 April 1706. She married Roger Kynaston, a gentleman, on 4 June 1737 at Dudleston and lived with him at Lee in the parish of Ellesmere, where she bore him two daughters. Predeceasing her husband, she was buried at Ellesmere St Mary on 9 May 1758. 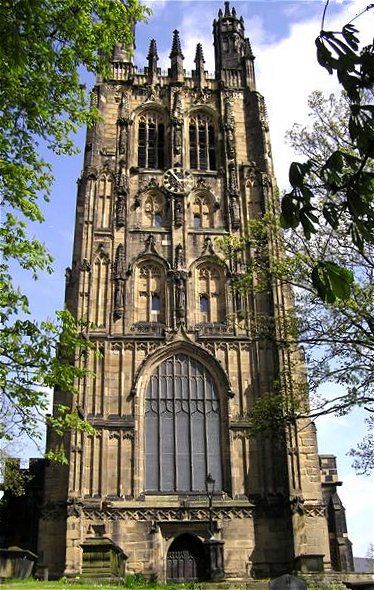 first of Thomas Atcherley’s children to be baptised at Wrexham’s church of St Giles (pictured right) was his youngest son, Roger, on 1 November 1712. The parish register gives his date of birth as 2 October. Roger went on to produce another generation of Atcherleys, and I shall in time write more about him. Then came Thomas’s youngest daughter, Elizabeth, born on 2 July 1715 and baptised on the 22nd of that month. I have found no other records relating to her.

Wrexham’s parish register shows that Thomas Atcherley was a church warden in 1706-7 and 1707-8, and an entry dated 14 December 1714 recording the burial of “Mrs Shusan Acherley widdow of w.r.” (w.r. being an abbreviation for Wrexham Regis) is evidence that Thomas’s mother Susanna lived with him (or at least near him) in her later years. But nowhere in Wrexham’s register, or in that of Baschurch, is Thomas Atcherley’s wife named.

Thankfully, there are other documents in which the name of Thomas’s  wife was given. Those documents relate to a long legal battle fought between Thomas and his sister-in-law, Ann, a battle which his wife and eldest son and heir were dragged into. And so we find, among the Depositions taken by Commission in the first year of the reign of George II, now held by the UK National Archives, the case of “Thomas Acherley and his wife Mary, Richard Acherley. v. Anne Acherley, widow”.

But who was Mary?

] of Stanwardine in the Fields died, and was buried at Baschurch All Saints on 9 June. Mary had known for some time that it would not be long before she joined her late husband John Atcherley in the afterlife, and she had made her last will on 26 April. In that will she commended her soul to Almighty God and her body to Christian burial, and gave directions for the disposal of her worldly estate.

“Thomas Acherley of Salop” (Shrewsbury), Mary’s only other surviving son, was one of two residual legatees and was given “the sum of ten pounds now in his hands & for which I have his note and what arrears of Rent was due at Lady day last from John or Thomas Eyre & Samuel Furmason”. His wife Jane, Mary’s daughter-in-law, received “one brass-Pott one Iron dripping pan one large Pewter Gun”. Mary  left her grandchildren “Laeticia, Elizabeth, Mary, Richard, Ann & Richard each of them one silver spoon” and in addition, Elizabeth – who was baptised at Baschurch on 31 Dec 1697 – was to receive money “to buy her Cloths if it can be spared when all other charges herein after mentioned shall be discharged”. Letitia was Roger Atcherley’s daughter, Elizabeth was a daughter of Mary’s son Joseph, of London, and Mary, Richard and Ann were children of Thomas of Salop. This leaves the second Richard unaccounted for.

] the younger, in her will. She gave “the furniture of the best Chamber all the linnen the furnace Brass pewter & all other of my household goods except those above mentioned to my son Thomas Atcherley of Salop in trust for the seperate use of my daughter Mary Acherley without any intermedlin of her husband and not to be subject to his debts & to be disposed of as she alone shall separatly direct notwithstanding her Coverture”. In addition Mary directed:

Lots of references there to daughter Mary’s husband, and to her coverture – a legal term referring to the legal rights (including property rights) and obligations of a married woman being lost to, or consolidated with those of, her husband. When I first read this will, and for a very long time afterwards, I thought that those references were designed to protect the younger Mary’s inheritance in the event of her marriage at some point in the future. This Mary was surely unmarried given that she still bore the Atcherley surname.

My initial attempts to find further records of Mary Atcherley the younger after the references to her in her mother’s will failed, leaving me to wonder: What happened to Mary?

Part III. In the year 2014, I asked genealogist Martin James (Family Heritage Search) to obtain and send to me copies of the Atcherley pedigrees and genealogical notes from the collection of the Rev John Newling (1762 – 1838), held at the William Salt Library in Stafford. From the information contained in the digital images I received, it was evident that Reverend Newling knew the Rev James Atcherley and that he was able to tap into James’s knowledge when compiling his Atcherley pedigrees.

Other puzzles are resolved too. Thomas Atcherley’s son Richard was born and baptised at Stanwardine because his wife went to stay with her own mother for the birth of her first child. And the second of the two grandchildren named Richard in the will of Mary Atcherley the elder in 1703 is no longer unaccounted for. Though a formal record of the marriage of Thomas and Mary Atcherley remains elusive, all the facts support the information from John Newling indicating that such a union took place. Two separate branches of the Atcherley family tree had indeed been reunited.

Picture credits. View towards Wrexham’s Town Hall: Image from Wales Illustrated in a Series of Views, published 1810 and therefore public domain. Wrexham St Giles: © Copyright Kenneth Allen, taken from Geograph and adapted, used and made available for re-use under a Creative Commons licence. Merging tree trunks: By the author.