] and the rest of the Marton Hall Amateur Opera Company, posed in full costume in front of the Hall from which the company took its name. Also in the photograph, taking prominent places in the centre, are David Francis Atcherley [

] in his judge’s wig and robes, and David and Caroline’s daughter Rosamond Minnie Margaret Atcherley [

] sitting on a chair with what looks like a small basket of flowers.

The above, cropped copy of the photograph, squeezed into the confines of this post, does not do the original justice. A larger version can be viewed on my Atcherley.org.uk Flickr photostream and portions of this precious picture at a higher resolution can be seen below.

My first tasks, once I had received this photograph (another eBay purchase), were to identify the Atcherley family members featured, and to establish which opera the company was costumed for. Helpfully, on the piece of card on which the photograph has been mounted are many names. Less helpfully, the number of names does not match the number of people pictured, which means that a number of those in the shot remain anonymous. From left to right, the names inscribed are:

Whoever wrote the names was clearly ignorant of the correct spelling of Atcherley! Further research revealed one or other errors too. But to have the names, even with some minor mistakes, is certainly better than not having them at all – and from a cut in mount it appears that they were going to be going sliced off until the bearer of the blade changed their mind! 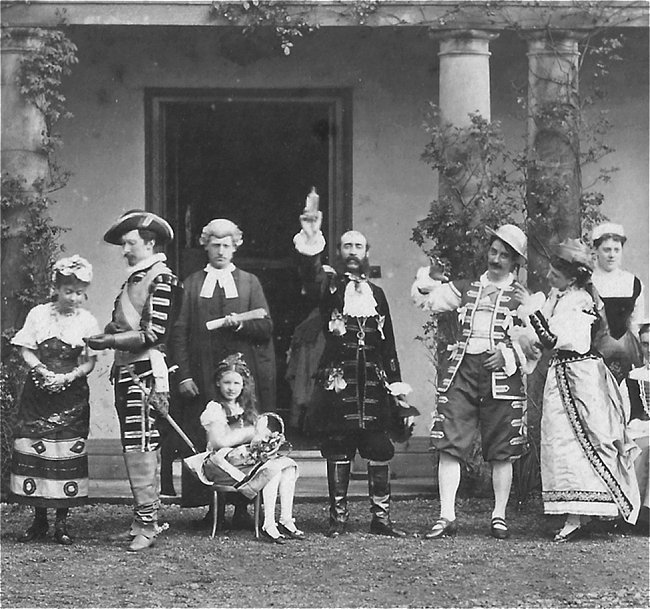 From the centre of the photo: David Francis Atcherley can be seen in his wig and gown, to the left of ‘Doctor Dulcamara’ and behind 8-year-old Rosamond Minnie Margaret Atcherley. To the right of Dulcamara is Nemorina, and to his right is Adina – Caroline Frances Amherst Atcherley.

I am not an opera buff, but a little research using Google Images soon highlighted a strong contender for the name of the opera for which the amateurs of Marton were preparing: Donizetti’s  L’Elisir d’Amore (The Elixir of Love). The big clue was the man bearing a bottle aloft – the character of the ‘quack’ doctor Dulcamara with his (fake) love potion (who can be seen taking centre stage of the photo below, originally published in 1917 and with no known copyright restrictions). 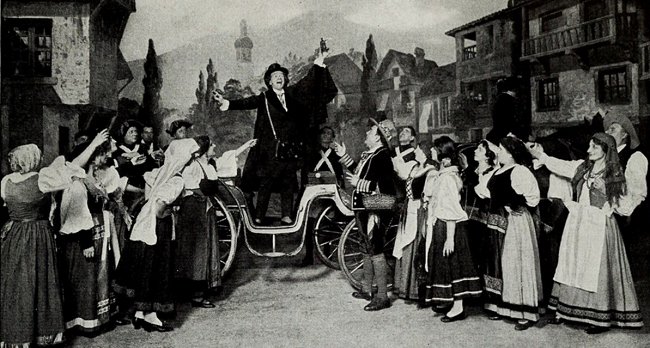 L’Elisir d’Amore is a comic opera. It tells the story of Nemorino, who is in love with the beautiful Adina. Adina, however, not only spurns Nemorino’s advances, she also favours the attention of Belcore. In desperation Nemorino turns to the peripatetic purveyor of potions Dr Dulcamara, and purchases a potion with which he will win the heart of the lady he loves. Or will he? A great introduction and some fascinating facts about L’Elisir d’Amore can be found in L’elisir d’amore in a nutshell, (formerly on the Opera North Blog; my link now takes you to an archived version of the page at the Internet Archive Wayback Machine). For the full story, there is also a detailed entry on Wikipedia.

So, when was the photograph of the Marton Hall Amateur Opera Company taken? All the evidence points to the Spring of 1878. On 10 April that year, page 7 of Eddowes’s Shrewsbury Journal, and Salopian Journal included an advertisement for “Marton Hall Amateur Italian Opera Performances, in aid of the Shropshire Eye, Ear and Throat Hospital and other Shrewsbury Charities.” “L’Elisir D’Amore!” was to be performed at the Theatre Royal in Shrewsbury on the afternoon of Tuesday 30 April from 2pm, and on the evening of Wednesday 1 May from 7.30pm. Prices of admission were 7s 6d for pit stalls (family tickets to admit three, 20s); 5s for lower boxes; 3s for upper boxes; and 1s for the gallery.

On the same page of that newspaper was this editorial, which I have changed only by correcting ‘Amina’ to read Adina:

In our columns will be found the formal announcement of the pleasure the indefatigable Lady and Squire of Marton have provided for Shropshire. Those of our readers who have ever undertaken so much as the getting up of a village concert know something of the toils and cares of an entrepreneur; but “an Amateur Opera”—think of it; the number of ladies the part of prima donna would suit: the many tenors having a beautiful high “G”; the basses profound in everything but knowledge of music; and the chorus who know everything but their parts; and then, the orchestra, the dresses, the preparations of the theatre and plans, and the general arrangements and announcements all go to break the heart of any ordinary mortal.

Yet we know by experience that “Marton Hall” can successfully carry through this really arduous effort, and the public quite appreciate the spirit shown, as will be seen by the plan of the seats, already filling to repletion for both performances, in Messrs. Adnitt and Naunton’s charge. This is especially for the evening of 1st May.

It is of some interest to note the details of the present adventure. The opera selected is to our mind a “happy thought.” “Trovatore” was very successfully performed last time, but a light and sparkling work like “L’Elisir d’Amore” will give better results for the same exertions. True we shall not have Aznoena depicted, but the parts of Adina, Nemorino, Belcore, and Dulcamara, will be made to tell much more easily than the more exacting requirements of a “grander” opera; and the ensemble of the performers will, we doubt not, be altogether more effective, and having secured so able a conductor as Captain Harvey we are sanguine of a more complete success. An orchestra of some dozen amateur performers has, we believe, been secured from the immediate neighbourhood, and are already hard at work, and the chorus will be gathered at Marton during the Easter week.

The parts of Adina and Dulcamara we gather will be taken by two of the performers of last time, while two gentlemen, new to Shrewsbury but not to fame, will take the parts of Nemorino and Belcore; and a farther treat is added to the opera by creating a more prominent opportunity in the part of Gianetta. Care, too, has been taken to provide a short statement of the plot of the story, and copies of the book of words in Italian and English will be at hand.

The opera, we are told, will occupy about two and a half hours. In short, the arrangements do credit to those who have taken charge of them, and we cannot doubt they will give the best opportunity of showing to the best advantage the high musical talent secured, nor can we doubt that a well-merited triumph will follow on well-directed exertion, and that the charities on whose behalf the whole is organised will be able to blazon their boards in a good round sum with the names of the Squire and Lady of Marton. 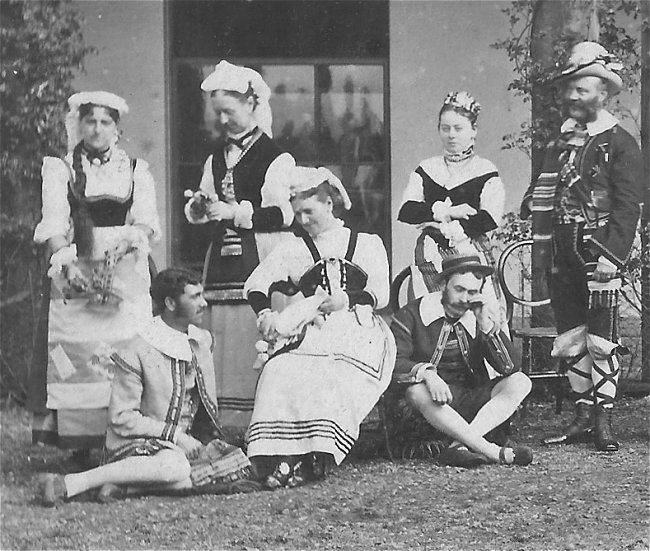 The left side of the Marton Hall Amateur Opera Company photograph.

It is fair to say that the Marton Hall company’s production was very well received. Eddowes’s Shrewsbury Journal, and Salopian Journal of 1 May 1878 (page 10) gave this review:

The first performance of this clever amateur company was given in our theatre yesterday afternoon, to a crowded and fashionable audience, who seemed fully to appreciate the talent that was exhibited, and the beautiful music presented to them. The piece selected was Donizetti’s “L’Elisire d’Amore,” and it would perhaps have been difficult to have fixed upon one that more fully developes the pleasing style of Italian composition, abounding as it does with lovely melodies and fine choruses.

Writing now within a limited period before going to press we fear we shall do but scant justice to the excellence which characterised the performance from beginning to end. The following was the cast of the principal characters:—Adina, Mrs. Atcherley; Gianetta, Mrs. Lacon; Nemorino, Mr. H. de Meric; Belcore, Mr. J. Griffith; Dulcamara, Mr. J. Marlowe. […]

Of Mrs. Atcherley we need scarcely speak, for she is so well known, and her musical talents so highly appreciated in this neighbourhood, that we need not endeavour to describe them; we may, however, remark that in our judgement she was in better voice than last year, or else the music was better suited to her than was the “Trovatore.” In her duet, “Quanto amore,” with Dulcamara, her dulcet voice was heard to very great advantage. She had an excellent companion in Mrs. Lacon, who sang the small parts allotted to Gianetta with in true musician-like style, exhibiting a pure mezzo soprano voice of a highly cultivated character. Interpolations are not always improvements, but it was evidently very gratifying to the audience that this lady introduced the favourite though somewhat hackneyed song from “Lucrezia Borgia,” “Il segretto.”

We must for a moment refer to a chorus for ladies only, which was rendered in a charmingly piquant style, calling for an irresistible encore. Of the gentlemen we have only time and space to say that they acquitted themselves both in their acting and singing with great ability, obtaining much well-deserved applause. If we may hope to escape a charge of rudeness, we would venture to suggest that the frequent spasmodic halts of Nemorino at the end of his sentences did not add to the beauty or grace of his singing.

Upon the whole the promoters of this highly pleasing entertainment may certainly be congratulated upon achieving an unmistakable success, one which deserves the heartiest thanks of the public, and which we hope will be rewarded by results which will be gratifying to themselves by enabling them to make a handsome contribution to those charities which they have so kindly laboured to benefit.

We must not omit to say that the compliment of throwing handsome bouquets on the stage was several times paid to the ladies, which they gratefully acknowledged. 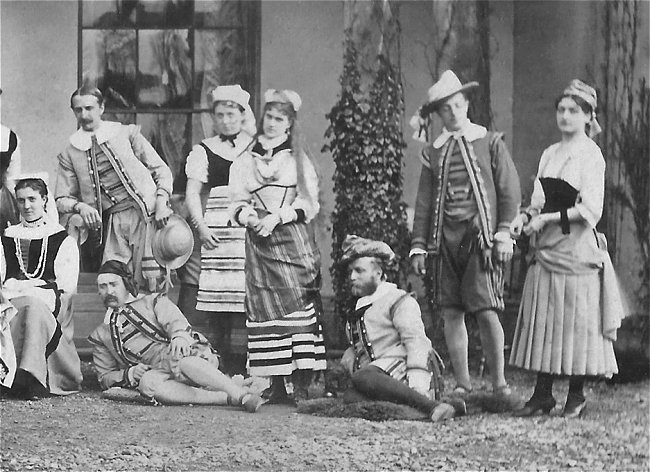 The right side of the Marton Hall Amateur Opera Company photograph.

On page 7 of the Wellington Journal of 11 May 1878, the following organisation acknowledged donations from “D. F. Atcherley, Esq., and Mrs. Atcherley, being part proceeds of the Marton Hall Amateur Opera Performance “: the Salop Penitentiary (£15), the Shrewsbury Dispensary £10, and the Shropshire Eye, Ear, and Throat Hospital £43 5s.

What a fabulous piece of Atcherley family history!