Although born in Canada (at Brockville, Ontario, on 21 July 1869), Catherine Emma Grace Atcherley [

] – usually known as Grace – grew up in Rhyl on the north coast of Wales. After losing her mother when she was just one year old, and her father at the age of five, it seems likely that Grace was brought up by her stepmother and her maternal aunts. I suspect it was her aunts in particular who fostered Grace’s support for charitable causes. The identity of the person or persons who inspired her interest in golf, on the other hand, is anybody’s guess! 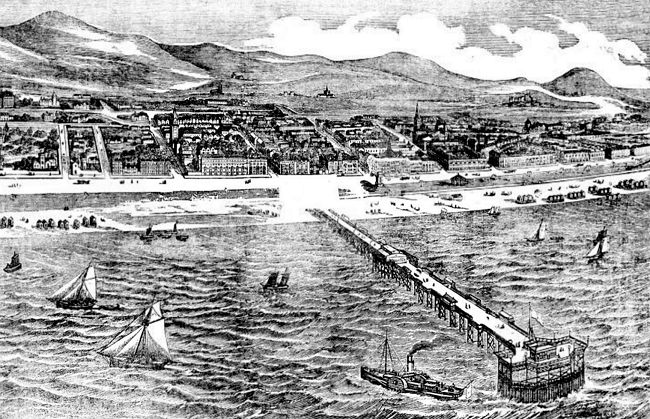 Rhyl, as depicted on the front page of The Rhyl Journal

The earliest mention of Grace that I have found in the press covering North Wales, dates back to Christmas day 1886. That day’s edition of the North Wales Chronicle included Grace Atcherley (her name, oddly, prefixed “Mr.”) in its list of visitors to the annual ball in aid of the Denbighshire Infirmary. This may have been seventeen-year-old Grace’s first attendance at such a social gathering, and indeed the first time that she participated in a fund-raising event in aid of a charity. It certainly would not be her last, on either score.

Tracking down all of Grace’s charitable contributions during her years at Rhyl is problematic. There are numerous newspaper reports and listings for that period which feature “Miss Atcherley” or the “Misses Atcherley”. “Miss Atcherley” might, on occasion, have been Grace, but was more likely to be the senior Atcherley sister (Grace’s eldest surviving aunt at the time in question) at Bryn Estyn in Russell Road. And while the “Misses Atcherley” might have included Grace, it was a term that could equally have referred solely to her aunts – there is no way of knowing for sure.

Fortunately there are several notices in the North Wales newspapers in which Grace Atcherley is clearly identified. From these we learn that in 1889 she gave £1 1s towards a presentation fund for the Rev T Richardson, vicar of Rhyl, on his departure for Northop. In 1892, Grace supported a sale of work in aid of the funds of the Church Missionary Society, the Society for the Propagation of the Gospel, and the Zenana Missionary Society, which was held on 2 July at the Boys’ Schoolroom in Clwyd Street, Rhyl. According to the Rhyl Journal:

The room presented a very picturesque appearance, the various stalls being laden with a lavish display of plain and fancy wares, consisting for the most part of children’s frocks, antimaccassars, baby-linen, photos and frames, stationery, dolls, vases of flowers, cushions, dainty tea-cosies, beautiful embroidery, and a variety of other useful and ornamental articles too numerous to mention, the garments, &c., being the artistic handiwork of ladies interested in the missionary cause.

Miss G Atcherley was one of those thanked for their contributions to the Zenana Mission Stall at the above event. Also in 1892, Grace donated £2 to the Rhyl Branch of the Royal National Lifeboat Institution. Living on the coast, she must have been all too aware of the dangers faced by those who put to sea, and by those whose mission it was to rescue mariners in distress.

The following year, Grace Atcherley was among the many local ladies who helped to stage a grand fancy dress bazaar at Rhyl in aid of the Church House, St John’s Church Organ, and the Church Workers’ Union. The Rhyl Journal subtitled its report on this event: “’Fairyland’ at the Town Hall”. Grace was one of around a dozen stallholders looking after The Valley of Violets, while other attractions were named Sunflower Shade, Daisy Dingle, Rose Bower, Forget-me-not Dell (St. John’s Sunday School Teachers’ Stalls), Fernery (Refreshment Stall), Fairy Glen and Heathery (advertisement stall).

Grace devoted some of her days at Rhyl not only to good causes, but also golf courses. Rhyl Golf Club was formed in 1890, at a meeting which took place at the town’s Westminster Hotel on 1 March. The Rhyl Record and Advertiser reported:

Col. Mainwaring opened the proceedings by particularising the advantages to be derived from the establishment of a Golf Club. He pointed out that gentlemen as a rule avoided going to a seaside resort owing to the dearth of suitable recreation, and that the game of Golf was eminently suited, both by way of exercise and recreation, to act as a powerful attraction to gentlemen of good means living in towns like Chester and Liverpool to come here and make prolonged visits with their families (hear, hear.)

Although the inaugural meeting of Rhyl Golf Club seems to have been attended solely by men, and despite the fact that the club was seen as a means of attracting gentlemen to the resort, women were not excluded from the club. When subscription rates were agreed, they included one for ladies, which was set at 10 shillings.

“The first contest for the ladies’ monthly subscription” took place in March 1891, Grace Atcherley (then aged 21) being one of the 13 women who competed. According to Golf, A Weekly Record of ‘ye Royal and Auncient’ Game, “Miss May Pennant was returned the winner with the excellent score of 115, less 8 =107, Mrs. Birley and Miss K. Lloyd-Williams being close up.” Grace was firmly in 13th place, with a nett score of 229. 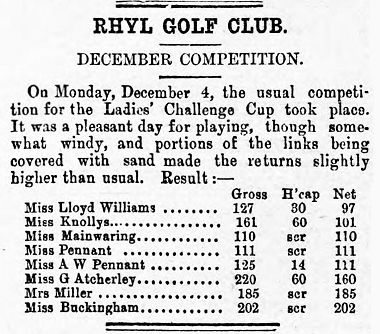 Grace did manage second place in the January 1893 ladies’ competition at Rhyl, but this was by virtue of there being only three players, one of whom made no return. Her handicap, which was 50 in 1891, had by this time increased to 60, where it remained. Grace played again in February, April, July and December 1893. She was placed sixth (out of seven players who made their returns), eighth (out of eight), eighth (out of 10) and sixth (out of eight) respectively. I have found no record of her playing golf again after 1893.

I think even Grace would agree that she was not a gifted golf player. So what was it that attracted her to the ‘Royal and ancient game’? It may in part have been, as Colonel Mainwaring had stated (albeit with gentlemen in mind), that golf was a suitable recreation “both by way of exercise and recreation”. But my guess is that golf provided Grace and other ‘ladies of leisure’ living in and around Rhyl with a novel opportunity for social interaction. Who, then, were the women in Grace’s social circle?

Some of the ladies appear to have been wives or daughters of the well-to-do gentlemen who founded the club. Mrs Birley, placed second in the first ladies’ contest at Rhyl, was most likely Elizabeth, wife of committee member Hugh Francis Birley. Both were lodging at 56 West Parade in Rhyl at the time of the 1891 census, and both were ‘living on their own means’. Similarly, Mrs Conwy (or Rowley-Conwy) who also played in that first ladies’ match was probably Marion, wife of the club’s first captain, Captain Conwy Grenville Hercules Rowley-Conwy, formerly of the 2nd Life Guards, who was a Deputy Lieutenant of Flintshire.

‘May’ Pennant, who won the first ladies’ contest at Rhyl, was in fact Mary Catherine Pennant. She and her two sisters, Georgiana Bankes Pennant and Adelaide Wynne Pennant, were regulars at the ladies’ matches. The father of these three was Philip Pennant Pennant (born Philip Pennant Pearson), a Deputy Lieutenant, magistrate and landowner, and their mother was Mary Frances, née Bankes. Through their mother, who was the daughter of the Rev Edward Bankes, the Pennant sisters were related by marriage to another of Rhyl’s lady golfers, Mrs Adelaide Sophia Scott Bankes, whose husband John Scott Banks was a magistrate and landowner.

The young Grace Atcherley was evidently mixing with the wives and daughters of some of the most prominent families of North Wales. One last example is Miss (Amicia Bertred Constance) Knollys, daughter of William Edward Knollys and his wife Amicia Mary, née Mainwaring.  Through her mother it appears Amicia was related to fellow Rhyl golf player Miss Mainwaring, and to the founding president of the club Colonel Mainwaring. Through her father she was related to Sir Francis Knollys, Private Secretary to the Prince of Wales. Sir Francis helped to arrange the visit of the Prince and Princess of Wales to Rhyl in 1894 – an event which was, as we shall see, of great interest to Grace Atcherley.

The Royal visit took place on Friday 13 July. The Wrexham Advertiser reported: “The chief thoroughfares were one mass of decorations. Fine weather prevailed, and some thousands of spectators thronged the streets of Rhyl to welcome the Royal visitors. … Everywhere in the town flags were to be seen, and the line of route was a mass of colour, loyal mottoes being displayed.” The paper went on to say:

The Royal party arrived at 12.45, when presentations of the High Sheriff of Flintshire with the Committee were made. Miss Ralli presented a bouquet to the Princess, Miss Perks to the Princess Victoria, and Miss Strachan to the Princess Maud. The Clerk to the Rhyl Commissioners handed the address to Mr Mostyn Williams, Chairman, who presented it to the Prince outside the station. The Prince, in reply, thanked them for their expressions of loyalty, and referred to the allusion to Rhuddlan Castle in the address. Since then many princes had been to Wales, but none had the welfare and prosperity of the kingdom at heart more than himself. All knew how interested the Princess was in all institutions for the alleviation of suffering, and she wished to say how pleased she was to be present. 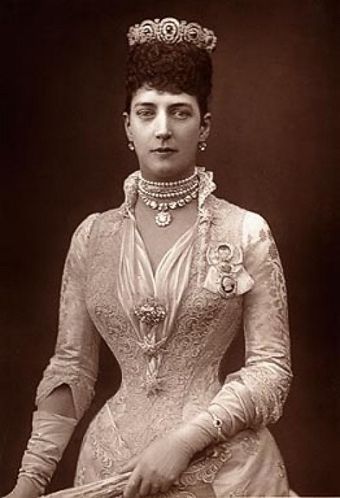 From the railway station, the Royal procession made its way through the streets of Rhyl, to the Royal Alexandra Hospital – named for the Princess of Wales (pictured left), who had been its patron since 1882. The Royal visit provided Alexandra with an opportunity to lay the foundation stone for a new hospital building, which was to cost more than £15,000. After the stone-laying, the Princess was presented with purses containing donations towards the hospital fund. A “list of the ladies who presented purses containing not less than £5 5s at the laying of the foundation stone of the Royal Alexandra Hospital” included Miss Grace Atcherley of Bryn Estyn, Rhyl.

Grace’s contribution to the Royal Alexandra Hospital was one of the last acts of charity she made during her years of residence in Rhyl. During the summer of 1895, the Atcherleys of Rhyl moved to Gresford, near Wrexham in Denbighshire. Advertisements for the sale, by auction, of Bryn Estyn appeared in the Rhyl Journal in September 1895.

In November 1895, the same newspaper carried a short report on the Rhyl Branch of the National Society for the Prevention of Cruelty to Children. Among the names in the “List of Subscriptions” accompanying the report, was Miss Grace Atcherley. Grace had, while in Ryhl, been the Local Secretary of the Church of England Incorporated Society for providing Homes for Waifs and Strays. In Gresford, her work with children would continue, in a rather different way.