< Back to The Curate of Wednesbury and His Vicar – Part 2

] had hoped to reside quietly amongst the inhabitants of Wednesbury for many years, serving the parish as its Curate. However the bitter and very public clash between John and his employer, the Vicar of Wednesbury, had caused John’s hopes to be dashed. Would he find another parish in which he could live out his days in peace as a servant of his Lord? The answer was yes, although this did not mean that John’s name would not crop up in the newspapers or other publications from time to time. 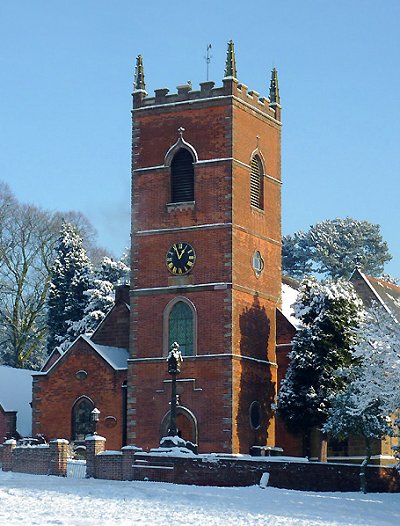 Another Curacy did not come John’s way immediately. The Rev Daniel Pape, Vicar of Penn in Staffordshire, provided John with some employment: John signed Penn’s marriage register as Officiating Minister on 1 December 1805 (when he conducted two weddings) and again on 2 February 1806. It is possible that he performed other ceremonies and services there too. Pape had led the investigation into the unpleasant affair at Wednesbury, and seems to have been supportive of John. (Penn St Bartholomew is pictured right.)

The performance of occasional ceremonies and services was not going to earn John Atcherley a living however. Fortunately, a more permanent opening became available later in 1806. The marriage register of Drayton in Hales (or Market Drayton) in Shropshire shows that John had become Curate of that parish by 12 July that year. After the difficulties John had encountered at Wednesbury, I can only assume that he made sure his new Curacy was licensed.

What a relief it must have been for John, to at last settle into a secure position in a busy town, where he was able to tend to the needs of his flock without undue interference from his Vicar or from other church officials. Of course, such a life does not generate much of interest for the newspapers – which means that from the latter part of 1806 onwards, the Rev John Atcherley’s name almost disappeared from their pages. Almost, but not quite.

In 1809, John’s name cropped up in newspaper reports of a case heard at Shrewsbury Assizes, concerning the alleged seduction of a Miss Jones. I should immediately clarify that John was in court as a character witness, not as the accused! Here is the report on Jones v. Owen, Esq., as printed in the Staffordshire Advertiser, in full.

Mr. Dauncey, in a most eloquent speech, commented on the infamous plea set up by the defendant, and stated to the jury that the plaintiff had been an innkeeper at Market Drayton, and that the defendant was at this time a Lieutenant in the 16th regiment of light dragoons. That when the defendant first became acquainted with the plaintiff’s family he was a Captain in the Shropshire Volunteers; that the defendant came with the regiment on permanent duty to Market Drayton, and the head quarters were at the plaintiff’s house; that the defendant whilst there paid great attention to the daughter of the plaintiff, and made her offers of marriage, but that she most prudently referred him to her father for his consent; having obtained the father’s consent, he continued to pay his address to the daughter till he purchased a Lieutenancy in the 16th, when being obliged to join his regiment, he offered to marry her privately, which offer she refused; he joined his regiment, and was absent about 12 months, during which time the plaintiff, by misfortune, was reduced in his circumstances, and obliged to leave the Inn; during the time of the defendant’s absence, a correspondence was kept up between him and the plaintiff’s daughter.

On the defendant’s return to Market Drayton on the recruiting service, he was informed of the plaintiff’s circumstances being much reduced, by the daughter, who begged that their acquaintance might be dropped; but the defendant assuring her that her father’s misfortunes should be no impediment to their marriage, the acquaintance was renewed, and in the month of March, 1808, he seduced her, and shortly afterwards left the place. She communicated to him her situation, and he wrote to her promising to return and marry her as soon as his affairs were settled in Wales. After some time he ceased writing to her, and her Brother in consequence went to him at Woodbridge, to know his determination; he again repeated to him his determination to marry his sister, and promised to return in three weeks for that purpose; he did not return, and she was afterwards delivered of a son.

Mr. Dauncey’s statement was fully proved by the plaintiff’s daughter, a very interesting girl, her brother, and the Rev. — Atcherley, the latter of whom stated that the daughter had always conducted herself in a very becoming and virtuous manner, and that she was the last woman whose chastity he would have suspected.

The judge in his summing up, stated that the plea of the defendant was one of the most infamous and audacious he had ever seen on a record, and that it greatly aggravated the case. The jury gave a verdict for the plaintiff, damages One Thousand Pounds. 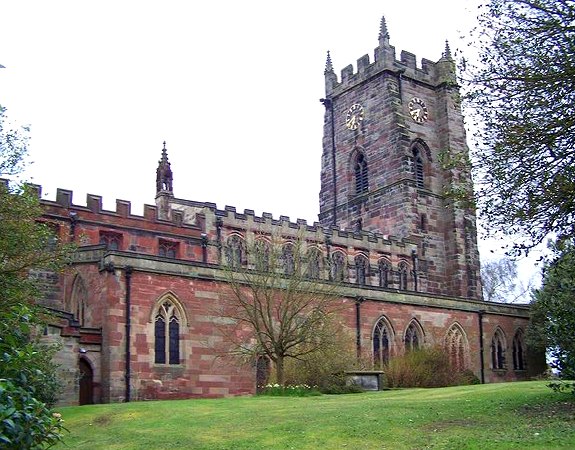 Another newspaper which mentioned John was The Salopian Journal of 18 September 1811. “Atcherley Rev. John, Drayton” was one of seven Atcherleys appearing in a list of men who had been issued game certificates, at a cost of £3 3s. each, for the period 1 July to 9 September 1811. (Also on the list was John’s brother, the Rev Roger Atcherley of Bridgnorth.) These certificates permitted the holders to take game (pheasant, partridge, grouse), and possibly also snipe, woodcock, quail, rail and ‘conies’ (rabbits). Though hunting game would have been regarded as a ‘sport’, it also provided meat for the dinner table.

For most of John Atcherley’s Market Drayton Curacy, his name appeared in parish registers rather than in newspapers – and not just the registers of his home parish. From time to time he filled in for other clergymen, conducting marriages at Adderley (on 5 May 1808), Moreton Say (20 September 1810), and no doubt at other parishes in the vicinity of Market Drayton.

John also did what he could to support “the diffusion of the Gospel” across the globe, through his support for the Church Missionary Society. The Early History of the Church Missionary Society for Africa and the East to the end of A.D. 1814 (published 1896) provides a short account of what may have been John’s earliest involvement with the Society:

On Saturday, the 25th [of September 1813], [Mr Goode] proceeded from Ramsdell to Market Drayton, the church of which had been procured for the Society by Mr. Clement Leigh. This town, also called Drayton-in-Hales, was within the eastern border of Shropshire, about twenty-five miles south-west from Ramsdell, and some fourteen in the same direction from Newcastle. The same evening he saw the Rev. John Atcherley, the curate, whom he found a warm, cordial, and active man, desirous of promoting the general cause of religion and of aiding the Society. He had already formed four committees for penny contributions, and consulted Mr. Goode as to rules.

The neighbourhood abounded with opulent families. The next morning, Sunday, the 26th, he preached to a congregation highly respectable and attentive, and in the afternoon, while Mr. Goode was at another church, Mr. Atcherley preached himself for the Society. The collection altogether was 43l. It was Mr. Goode’s opinion that Mr. Atcherley would make a very useful agent for the Society. For the afternoon Mr. Goode proceeded to Wem, ten miles to the south-west, having obtained that pulpit through the interest and exertions of Mr. Atcherley, upon a letter from Mr. Dobbs.

The £43 collected by John Atcherley at Market Drayton was acknowledged in the Missionary Register of October 1813, which noted that “The Members of the Church, it is highly gratifying to remark, begin very generally to feel the obligation under which they lie, of communicating the Gospel to their Heathen and Mahometan fellow-subjects, and to the whole world.”

The Church Missionary Society was at that time active in Europe, the near East (Turkey), Africa, Asia (including Ceylon, China, Java and Mauritius), the South Sea Islands, the USA, “British North America” (Canada) and the West Indies, as well as at home in Britain where the Scriptures were distributed. The provision of education to ‘heathens’ – which doubtless included religious teachings – seems to have been a key activity (the volume of the Missionary Register covering 1816 includes at least 100 occurrences of the word ‘heathen’).

At the beginning of 1816, another collection made at Market Drayton by John Atcherley for the Church Missionary Society raised the sum of £22 5s. 8d. It was probably the last such collection John made. One of the final appearances of his name in a newspaper was in the Staffordshire Advertiser of 23 March 1816, under the heading “DIED”: “18th instant, at Market-Drayton, the Rev. John Atcherley.”

John Atcherley was buried on 23 March 1816 at the church where he had been Curate for nearly ten years: Market Drayton St Mary. The burial register did not record his age, but based on the date of his baptism he was most likely 44, possibly 45. His life, though relatively short, was an eventful one. As a Naval Chaplain and as a Curate, John stood up for what he believed in and did not shy away from conflict.