Sir, I am afraid you will scarcely pardon the liberty a stranger is about to take with you, but I am at present under the greatest affliction of mind, having a month ago lost my only daughter, and having been so many many years absent from my native country I am as it were worn out of acquaintances there; I am emboldened to address you, from the old friendship that subsisted between my Father & yours, the name of my Father was Shairp, he was Secretary to the Royal Bank …

The purpose of Christiana Atcherley’s letter to Gilbert Innes, of the Royal Bank of Scotland, was a simple one. She wanted Gilbert to drum up interest in a property in Scotland which had been bequeathed to Christiana some years before, and which she wished to put on the market. Christiana was not one for writing short letters however. This was bad news for Gilbert Innes, who had to wade through a “long preamble” before Christiana finally got to the point. But it is good news for those of us who are interested in the life story of Christiana Atcherley – because her life story is exactly what her long preamble consisted of!

Christina’s correspondence provides a fascinating narrative, which we can augment with additional sources of information to make her story more complete. Let us start then, as Christiana did, at the beginning:

… the name of my Father was Shairp, he was Secretary to the Royal Bank, & I perfectly remember you Sir at our house in Broughton when I was a happy child, I have since that period undergone many reverses of fortune, my troubles began by losing my poor Father, who you may have heard died insolved [= insolvent], partly I understand from having become bound with one of his brothers to pay half the mortgages on his Estate …

My research into Christiana’s family has not been easy, thanks to the absence of many vital records – including that of Christiana’s baptism. But other sources, such as wills and newspapers, and of course Christiana’s own words, have helped to fill in some of the gaps. Based on her age at death (which may not have been recorded accurately), it seems that Christiana Shairp was born around 1769, and we know that she was born in Scotland. Was Broughton, near Edinburgh, the scene of her happy childhood, also her birthplace? I suspect so, but cannot prove it.

Mystery surrounds not only the exact location of Christiana’s birth, but also the identity of her mother – I have found no record of her father’s marriage. And there is no mention, by Christiana or in any records I have found, of any brothers and sisters. One possibility is that Christiana was, like her cousin Marion Shairp, born out of wedlock. (Marion’s father – and Christiana’s uncle – John Shairp [

], left all of his estate and effects in England to his “natural daughter” Marion who, though born on 9 June 1757, was not baptised until 1810. By then, John had been dead 15 years, and Marion was 53! Her mother was named as Sarah Antrobus.) I think unlikely that Christiana was ‘illegitimate’ however. Perhaps Mrs Shairp died not long after the birth of her only daughter, leaving Christiana with no mother, and no siblings.

The father of Christiana was Thomas Shairp [

]. He was not one of the men of that name who were of Houstoun, in county Linlithgow (a family documented in Burke’s Genealogical and Heraldic History of the Landed Gentry), but he was related to them. Indeed, it is a document within the papers of the Shairp family of Houston which confirms that Thomas Shairp, “one of the Secretaries of the Royal Bank of Scotland,” was the eldest son of Alexander Shairp [ 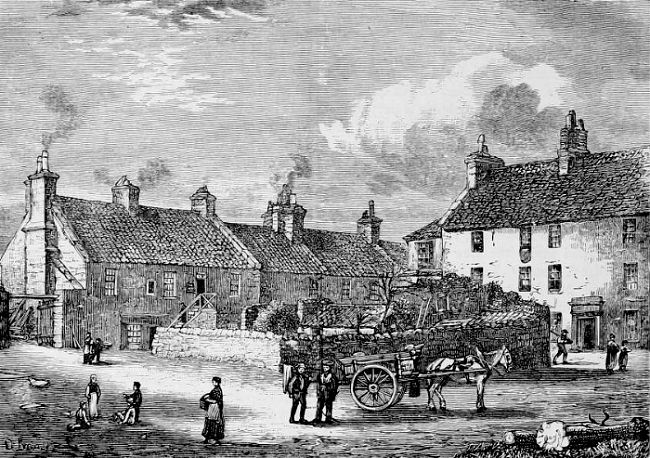 Broughton – the remains of the old village as they appeared in 1852.

Thomas Shairp became one of two Joint Secretaries to the Royal Bank of Scotland in 1763. With this position came a salary which enabled Thomas and his daughter Christiana to live very comfortable lives. The sale of Thomas’s estate and effects, following the his death on 14 May 1785, meant that descriptions of the Shairp family home and its contents appeared in the local press. The following appeared in the Caledonian Mercury of 17 September 1785 (and later editions):

That VILLA in Broughton, near Edinburgh, which belonged to the late Thomas Shairp, Secretary of the Royal Bank, with the Garden and Shrubbery belonging thereto, and with coach-house, stable, and other offices. The House consists of five rooms, kitchen, and several conveniences. It is finished with uncommon taste and elegance and commands a most beautiful and extensive prospect. Also that piece of GROUND, consisting of about one acre Scots measure, adjoining the above, on the south-west, with a coach-road from [Broughton] Loan. …

In the same paper, the following April, this notice appeared:

A Rouping of Household Furniture.
THERE is to be SOLD, upon Tuesday the 25th of April current, in that house in Broughtonloan, possessed by the late Mr Thomas Shairp, Secretary to the Royal Bank,
The whole HOUSEHOLD FURNITURE, consisting of mounted beds, down and feather beds, sheets and blankets, bed and table linen, mahogany bureaux and drawers, mahogany tables, dining room and drawing room furniture, mirrors of different sizes; tea and table china, and silver plate; a variety of prints and paintings, with some bulls [=balls?], guns and small arms, a telescope, a fine chamber organ, a table clock, a water cistern, a jack, with a variety of kitchen furniture. …

If the approximate year of birth for Christiana derived from her age at death is correct, she was about 16 when her father passed away. For the next chapter of her life story, we return to her letter:

… however another of his Brothers (Alexr) a Russian merchant kindly sent me to a Boarding school at Durham, & afterwards took me to live with him in London, where I enjoyed the greatest affluence for several years, when my poor Uncle died, & left a quarter of his Fortune (having no Children of his own) to be divided between a male Cousin of mine (whom he had likewise adopted) & myself, after the death of his wife; but as is often the case with mercantile property, it fell far short of expectation, & my share was only £1000 stock; my aunt then retired to live at Southampton & took me with her where (to be brief) I continued to reside most comfortably till she unfortunately died also …

So Christiana’s home following the death of her father was “a Boarding School at Durham”. I have found two potential candidates for this school. One was run by Mrs Eleanor Greenwell, who in June 1780 placed a notice in the Newcastle Chronicle begging leave “to acquaint her Friends and the Public, that she continues her Boarding-School for young Ladies, in Crossgate, Durham : And those who please to favour her with the Education of her Children, may depend upon her utmost care and Attention being exerted for their advantage …”. Another, also advertised in 1780, was Suggett’s Boarding School in Old Elvet, Durham.

Both of these boarding schools were still operating in 1795, when Christiana was sent to Durham by her uncle Alexander Shairp [

]. In 1792 Mrs Suggett’s school was teaching music, French, dancing, writing and arithmetic, with “every attention” paid not only to “every branch of literature” but also to the girls’ morals. Mrs Greenwell meanwhile, continued to run her school until she died in 1796, when the establishment was taken over by a Miss Ann Hilton. Exactly how long Christiana remained in Durham – with Mrs Greenwell, Mrs Suggett, or another boarding school proprietress for whom I have found no record – I do not know. 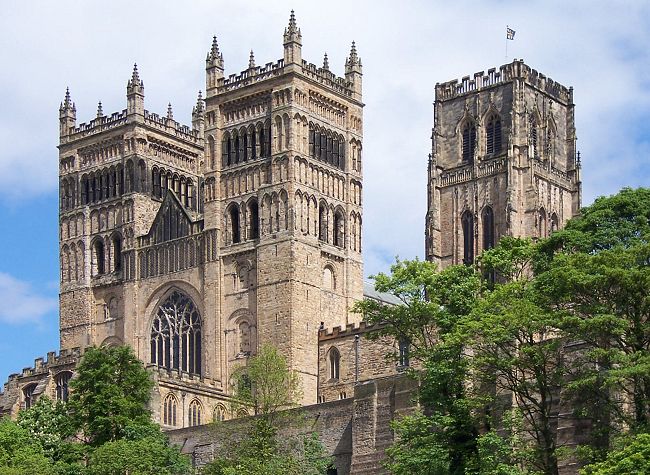 Durham Cathedral would have been a familiar sight to Christiana while at boarding school.

It was perhaps because of the responsibility he had taken for the care of his niece that Alexander Shairp made his will in December 1785. As Christiana later wrote, the will made provision for her and a “male Cousin” – Alexander’s nephew, also named Alexander Shairp. Their quarter part of Alexander the elder’s “fortune” was to be placed in 3 per cent Consolidated Funds, with the interest to be used for their education “and other purposes” until they reached the age of 21. Then, the will decreed, “this quarter part shall become their Property share and share alike”.

In the sort of will that genealogists love, Alexander Shairp also named and made bequests to a number of family members. His brother “John P Shairpe Esquire of Kirktown in the Parish of Bathgate” (mentioned above) was to receive a quarter part of his estate. So too was his brother “William Shairp Esqr [

]. The one name which Alexander did not give in his will was that of his “beloved wife”, who was to receive, “in consideration of her many virtues and goodness”, Alexander’s household furniture and, for the duration of her life, the income from his estate and effects.

As Christiana indicated in her letter, her uncle Alexander Shairp was a merchant who traded with Russia. It appears that he was apprenticed to his uncle Walter Shairp (who became Britain’s consul-general at St Petersburg in 1776), and was later a partner in Shairp and Maude, Russia merchants of Broad Street, London. His wife, it turns out, was Walter’s daughter Janet Shairp [

], to whom Alexander was married in 1783. Trade with Russia was good – no wonder Christiana “enjoyed the greatest affluence” while living with this couple!

Alexander Shairp died, in Broad Street Buildings, on 17 February 1789. The circumstances of death were rather shocking: a Coroner’s Inquisition found that he had put a gun to his head and shot himself. As the jurors concluded, “Alexander Shairp not being of sound mind memory and understanding but lunatic and distracted in manner and by the means aforesaid did kill himself”. No wonder his widow took herself and Christiana away from London.

Janet Shairp and her orphaned niece resided at Southampton until December 1795, which is when Janet passed away. Christiana was at that time about 26 years of age, and despite the fact that she had received £1000 in stock when she was 21, it appears that she was not ‘of independent means’. She was taken in by her only remaining uncle, William, and the stage was set for the next instalment of her life story.

… my uncle Major Shairp of the Marines, who had a small house on Blackheath invited me to come to him, which I did, & remained there about four years, during which time I became acquainted with Capt Atcherley of the same Corps, & married him …

Picture credits. Edinburgh – The castle and the Old Town in 1769: Adaptation of a public domain image taken from Wikimedia Commons. Broughton – the remains of the old village as they appeared in 1852: adaptation of an image from page 180 of Old and New Edinburgh, published circa 1882 and therefore in the public domain. Durham Cathedral: Photo by Jungpionier, taken from Wikimedia Commons and used under a Creative Commons licence.