] found himself in Belgium, in charge of some of the best of Britain’s military aircraft: a Vickers Wellington, a Hawker Hurricane, and a Supermarine Spitfire. Men and machines from seven other European countries including Germany were there too. They had not gathered to fight however. Instead, practically on the eve of World War Two, representatives of Europe’s air forces and aircraft manufacturers had assembled for the Brussels Aero Show. We can only guess what the atmosphere must have been like.

David was at that time Commander of 85 Squadron, which was based at Debden near Saffron Walden in Essex and equipped with the new Hawker Hurricane. On 27 June 1939 this Squadron and No. 87 were brought under the command of 60 (Fighter) Wing, which itself was part of the Air Component of the British Expeditionary Force. In the event of war breaking out, the BEF’s Air Component was to move to defensive positions in France. With tensions in Europe escalating, 85 (along with other Squadrons) was mobilised on 24 August. A and B Flights were brought to readiness, with their Hurricanes stationed around the perimeter of Debden. War was not long in coming. 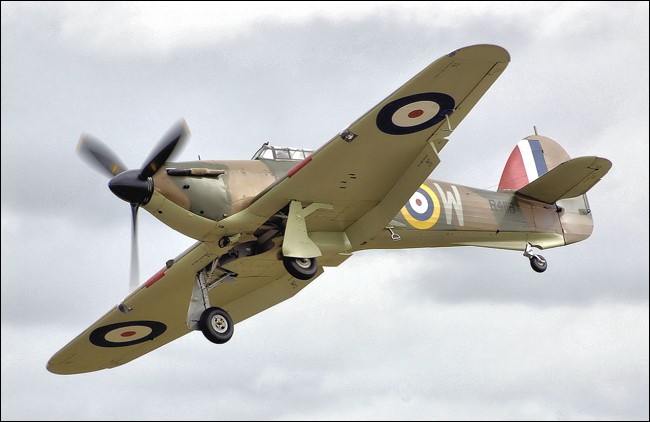 A bridge too low?

On 4 September, the day after war against Germany was declared, an advance party from 85 Squadron set off for France. Within five days they had prepared an aerodrome at Boos, near Rouen, which would act as the base for the two Squadrons of 60 Wing. The rest of 85 Squadron was then led from Debden, across the Channel to Boos, by David Atcherley.

Boos was only a temporary home for the Squadrons of 60 Wing, which relocated to Merville, close to Lille and the Belgian border, on 22 September (and then to nearby Seclin on 5 November). Before the move to Merville, the Commanders of 85 and 87 Squadrons decided they would take a look at the base. The story of that day’s events was later told by one of the participants, W J “Spanner” Hendley, then Warrant Officer, Engineer in 87 Squadron:

“… before moving, the two squadron commanders, Squadron Leaders David Atcherley … of 85 and W. Coupe of 87, flew Dan [Newton, of 85] and me over there to ‘case the joint’. We were wined and dined sumptuously at a hotel named the Seraphim. This was renamed the Paraffin when the squadrons arrived. After farewell salutes and handshakes, we left in our two Magisters for the run back to Boos, travelling at nought feet and scaring chicken, cattle and peasants as we went. Approaching Rouen, David Atcherley pointed to the transporter bridge over the river, obviously intending that we should fly under it. … When we got to within 300 or 400 yards of the bridge, I noticed that the transporter was moving slowly, but inexorably, from left to right. My pilot had spotted this too and yanked viciously back on the stick, clearing the right-hand tower by only a few feet. 85 squadron got through with little to spare.”

High jinks (or perhaps in the example described, low jinks) apart, the squadrons of 60 Wing were of course engaged in serious work. Both 85 and 87 carried out defensive patrols over cross-Channel shipping. The first enemy aircraft destroyed by 85 Squadron, a Heinkel He 111, was shot down into the sea on 21 November by Flight Lieutenant Richard “Dicky” Lee during a patrol near Boulogne.

Back from the front

On 8 January 1940, David Atcherley was transferred from his position as Officer Commanding of 85 Squadron, to the Staff of 60 Wing. He was promoted to the temporary rank of Wing Commander on 1 March. Although there are references to David being attached to 349 Squadron in May that year, this seems unlikely as 349 was not formed until 1942. References to David joining 253 Squadron as Officer Commanding in May 1940 however are more reliable, as John Greenwood (a fighter pilot with the Squadron at the time) recalls Atcherley’s brief tenure with that unit.

253 had fought in the Battle of France, and had suffered heavy losses – half of the squadron in fact, including the Commanding Officer and both Flight Commanders. The survivors were evacuated from France on 19 May and returned to their base at Kenley close to London’s border with Surrey. Within days they were off to Kirton-in-Lindsey, Lincolnshire, to reform the Squadron. David Atcherley was the new Commanding Officer. John Greenwood remembers David’s frustration at being unable to take on the enemy over France, a frustration which was not shared by those under his command! Mistakenly referring to David as Batchy (the nickname of his brother Richard), John recalls:

“Each day, as Dunkirk was going on, Atcherley was on the phone trying to get our squadron back down into the fighting, as he wanted to get into it himself, but we didn’t want to go back at all! However, Air Ministry soon got on to that and Batchy was only with us for about five or six days and he was posted north to Wick.”

Did David Atcherley really get on the Air Ministry’s wick? (Pun intended.) Or was he seen as the right person to be the first Commanding Officer of a strategically important and newly-established RAF station? Either way, Wing Commander Atcherley found himself heading north, arriving at Castletown in Caithness to take command on 8 June 1940.

Commander Atcherley on the deck

RAF Castletown had officially opened on 28 May 1940 as a satellite of RAF Wick. On 7 June however, the day before David’s arrival there, it became an operational station in its own right, part of 13 Group. Although seemingly a long, long way from the action that David sought, the station was a vital part of Britain’s defences both during and after the Battle of Britain. The reason for this was the close proximity of the Royal Navy base at Scapa Flow, for which RAF Castletown was to provide air cover. It was from Scapa Flow that British ships patrolled the North Sea, and this made the naval base a prime target for German air attacks (and potentially even land invasion). This was particularly so after the fall of Norway on 8 June 1940.

The station in its early months was basic to say the least, described by one author as “little more than three grass runways and a centralised collection of wooden and Nissen huts”. Conditions were particularly difficult during the severe winter of 1940-41. The bitterly cold weather prompted David to order the twice daily issue of a tot of rum to all the men.

The first squadron to be based at Castletown was 504. Their stay, which lasted until October 1940, is said to have been uneventful. However, with an Atcherley in command of the station, life was rarely dull for long. During the stay of another unit, 801 Squadron of the Fleet Air Arm, its naval pilots were instructed to practice deck-landing on a carrier then cruising near Orkney. Station Commander Atcherley decided to fly on ahead in a Miles Magister and try a deck-landing himself, having never performed one. He timed his departure so that he could introduce himself to the carrier’s captain and then be on hand to greet the pilots from 801 when they arrived. He did not however communicate his intentions to the ship and arrived unannounced. His landing was perfect – up to the point where his aircraft disappeared down an open lift shaft and into the carrier’s hangar. Atcherley emerged none the worse for his unscheduled inspection of the ship’s innards. Sadly, the same could not be said of his aircraft. The lift operator sent both plane and pilot back up to deck where, before the wrecked Magister was dropped over the side, it was photographed. David used the picture for his Christmas cards in December 1940.

Other Atcherley antics at Castletown were prompted by the fact that David’s brother Richard was then commanding another Scottish RAF base, at Drem near Edinburgh. In a bout of friendly sibling rivalry, the twins set about outdoing each other in improving the defensive capabilities of their stations. Ultimately David trumped his brother with typical Atcherley resourcefulness.

David had, while flying along the coast one day, discovered a beached ship on which was perched a 47-inch naval deck gun. He wasted no time in rounding up some men to board the stricken vessel and recover the weapon. The gun was hauled away and mounted on a concrete base at the west end of Dunnet Beach within about a mile of the RAF station, where it was christened “Big Bertha”. Although one source (which attributes the acquisition of the gun to Richard Atcherley) states that 500 rounds of ammunition were recovered with the gun, the Atcherley twins’ biographer John Pudney states that David somehow managed to obtain 130 rounds from the Royal Navy at Chatham.

Responsibility for firing Big Bertha fell to a corporal of the Pioneer Corps. The corporal had arrived at the station, along with the rest of his company, by way of an unfortunate mix-up which David Atcherley took full advantage of. The Pioneers turned up at Wick by train one day and were unsure where they were to go next. Once David heard of their plight, transport to Castletown was soon arranged and the company was put to work around the RAF station. The Pioneers should in fact have been sent to Hampton Wick in London! When the mistake was discovered and the company was re-routed to its correct destination, the gun-firing corporal remained – in exchange for a bacon slicer from the Castletown officers’ mess.

It is said that when the ammo ran out, Atcherley put in a requisition to the Royal Navy for more. At this point “the Admiralty investigated, got quite huffy and demanded their gun back. [Atcherley] at first refused, on the grounds that it was his by right of marine salvage. He gave in when it became apparent that, if necessary, the Navy would send the Home Fleet.” I suspect the use of a little poetic licence in the conclusion to that account.

The gun’s ‘tour of duty’ at Castletown certainly came to an end at some point, as did that of David Atcherley who moved on to take command of 25 Squadron at Wittering in February 1941. Big Bertha’s concrete mount, with its ring of bolts and the letters ‘RAF’ picked out in pebbles close by, remains on Dunnet Beach to this day.