There were two members of the Atcherley family named John who became doctors. The best known of the two was the Dr John Atcherley who was born in Lancashire and went to live in Hawaii. The other was born in Shropshire and went to live in …. Lancashire! I can’t give this Dr Atcherley his own TV show like the fictional Dr Finlay. But through this website I can at least bring his story to a limited online audience, and share details of some of the medical cases he was involved with. 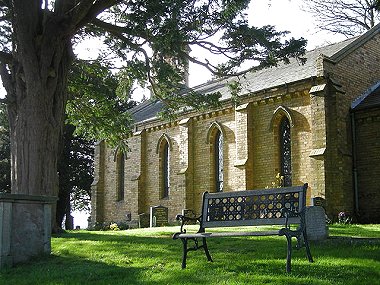 ] was the third of three children (all boys) born to the Rev Roger Atcherley and his wife Mary (née Rennell), who lived in Bridgnorth, Shropshire (see Mary Atcherley, née Rennell: Wife, mother, and widow). According to their Family New Testament and Prayer Book, John was born at half past four in the afternoon on 18 June 1804, and was baptised on 1 July that year. I have found no record of this ceremony in any parish register however, so it may have been a private baptism at home. Another baptism took place five and a half years later on 12 Jan 1810, in nearby Tasley (church pictured above), and was performed by the Rev Joseph Morris.

There was a John Atcherley who entered Shrewsbury School in 1821 and left in 1823. Was he this John? It is tempting to think that he was, as one of the school’s former headmasters was John’s grandfather, the Rev James Atcherley. However there were several other boys around at the time who shared John’s name. The identity of this Salopian scholar remains unconfirmed.

On 3 January 1833 John married Mary Morris at the church of St Leonard in Bridgnorth. Mary was the daughter of Rev Joseph Morris, who had baptised John back in 1810. Although newspapers at the time referred to him as “the late Rev. Joseph Morris,” the Rector of Tasley was still very much alive. He did in fact pass away four years later in 1837.

The marriage register of Bridgnorth St Leonard shows that at the time of his wedding to Mary, John was residing in Liverpool. John returned to that city with his new wife, and it was there that the couple had two children. Eleanor Vickers Atcherley, evidently named for her grandaunt Eleanor Vickers (née Atcherley), was baptised at the church of St Peter on 30 December 1833. Eleanor never married, and it appears that she shared her parents’ home until the death of her father. John Atcherley junior was also baptised at St Peter’s, on 9 August 1839, but he died at the age of 7 months and was buried at St Michael’s on 4 February 1839.

John Atcherley was, to begin with, an apothecary, or a chemist and druggist. Some of the earlier medical directories in which he appeared credited him with the qualification “L.S.A. Dub.” (as in the above entry in the British Medical Directory of 1853) or “L.S.A. Dublin” – Licentiate of the Society of Apothecaries, Dublin.

As Bird and Atcherley of “Gt. George’s pl” in Liverpool, John Atcherley and Richard Bird were listed as “Chymists & druggists” in Pigot & Co’s Directory of 1834. The two men did not restrict themselves to selling and administering medicinal drugs in the normal way however. During December 1833 and January 1834, they had the following advertisement printed in the Liverpool Mercury:

BEING long aware of the necessity of BATHS in the southern part of the town, have just erected in a complete manner, and on improved principles, VAPOUR and MEDICATED BATHS, HOT and COLD PLUNGE BATHS, with SHOWER BATHS, regulated to any temperature. Should they be honoured by public patronage, every attention which personal superintendence can bestow, together with the suggestion of the Medical Profession, may be strictly relied on; as the application of any remedial agent, in the form of vapour, can be safely and effectually introduced.

In December 1836, the partnership between Richard Bird and John Atcherley was dissolved by mutual consent. When the 1841 census was taken four and a half years later John, although still residing at Great George Place in Liverpool, was no longer a chemist and druggist. He was by this time a surgeon, having become a Licentiate of the Faculty of Physicians and Surgeons at Glasgow in 1840. 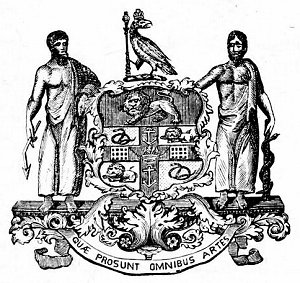 On the strength of his qualification from Glasgow, John was admitted an ad eundem (or honorary) Member of the Royal College of Surgeons in 1855 (the arms of the College are shown right). It seems likely that by this time John and his family were no longer residents of 3 Great George Place, as the lease of that property was advertised as being for sale on 1 December 1851.

The Atcherleys may initially have moved to 75 Great George Place, an address which the Royal College of Surgeons gave for John in their Medical Registers of 1859 and 1863. John was also listed at this address in the 1860 Gore’s Directory covering Liverpool. However at the time of the census of 1861 the Atcherley family was at 22 St James Road, Mount Pleasant in Liverpool. They were still there in 1870 when John’s wife Mary Atcherley died (on 3 April), but by the following year John and his daughter Eleanor had relocated to 32 Windsor Street in Toxteth Park. They remained there for next two decades.

Although John Atcherley transitioned from apothecary to surgeon, he retained a strong interest in the chemical sciences and indeed in science generally. In 1838 he was listed as a member of the British Association for the Advancement of Science, and in 1867 he joined the Anthropological Society of London. (It appears that he was also a Mason, belonging to Lodge No. 368, Lodge of Sincerity, at Liverpool.) On 24 February 1852, the Liverpool Mercury reported as follows on a lecture given by John, which was attended by his wife and daughter:

Lecture on Chemistry.—In St. Barnabas’s school, Greenland-street, on Wednesday evening last, John Atcherley, Esq., surgeon, of Great George-place, gave the second of a course of lectures illustrative of the chemistry of atmospheric air and water. These lectures were originally designed for the instruction of the senior pupils attending the school; but upon this occasion the urgent and reiterated requests of many members of the congregation and supporters of the school to be present were such as to induce Mr. Atcherley, in his usual spirit of philanthropy, to admit all.

It is impossible to speak too highly of the manner in which the lecturer treated the subject, both as regards the intelligibility of the language used, the definitions given of technicalities, and the numerous and truly-interesting experiments adopted as illustrations, which, combined, cannot fail to make a lasting impression on the minds of his audience, which was numerous and highly respectable.

From the earliest years of his career as a surgeon there was coverage of the medical cases in which Dr John Atcherley was involved, in the press and in medical journals. The earliest examples which I have found so far date back to 1841. A newspaper article from that year, reporting on Coroner’s Inquests held in November, highlighted the dangers of the demon drink:

The second inquest was on view of the body of James Wells, aged 50, a provision dealer, who resided in Upper Frederick-street. He had been complaining of illness for about a month past, and was found dead in his bed on Saturday morning last. Mr. Atcherley, surgeon, examined the body, and found violent inflammation of the stomach, combined with ulceration. The small intestines were also inflamed. The vessels of the brain were very much congested, and the heart much enlarged. It was his opinion that excessive drinking must have hastened the death of the deceased. Verdict accordingly.

The drink-related death of James Wells was far from an isolated incident. John Skillicorn, a master painter of Park Lane whose inquest was held in May 1852, was “another case arising from drunkenness.” He had gone to “Mr. Bird’s baths” – probably the same baths that Richard Bird had run with John Atcherley in the 1830s – “in a state of intoxication as he had often done before.” He was found “in a state of insensibility” and although John Atcherley was called in, Skillicorn died from apoplexy.

I am aware of another three of John Atcherley’s cases where alcohol sent men to the afterlife. In 1856 John Corliss, who was “addicted to drinking”, had “a three days’ ‘spree.’” Despite the care he received from Dr Atcherley after this, his condition worsened and he died at around 1:00 am on Friday 13 June. Then, in December 1862, ship’s carpenter David Marshall, aged 40, returned home from a voyage to the Baltic. He was “in a state of drunkenness” for a whole week until Saturday 4 January, and was found dead in his bed on Sunday 5th. John Atcherley “considered that death had resulted from intemperate habits, and the jury returned a verdict of ‘Died from excessive drinking.’” 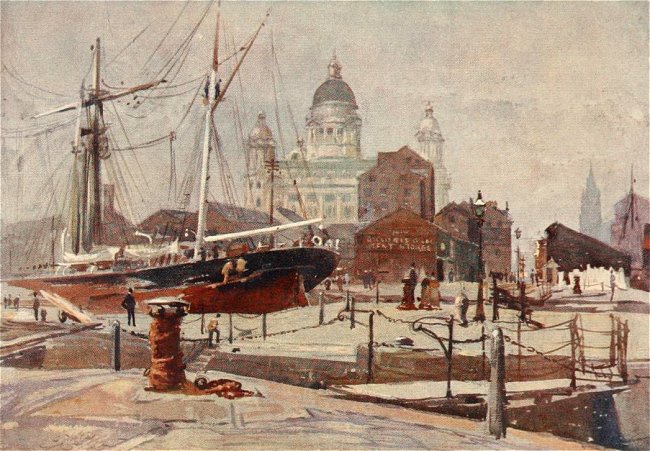 The final example of this sort of case from Doctor Atcherley’s ‘casebook’ involved a 37-year-old sailor named Patrick O’Connor. On Wednesday 22 September 1886, after arriving in Liverpool from London, he “went to a house of ill-fame in Gore-street, in a very drunken state.” He remained there the following day, and after vomiting “very much” he drank “various glasses of whisky.” On Thursday evening he called for a doctor, but died before medical assistance could be given. From what he saw, and from what he was told of the case, Dr John Atcherley “had not the slightest doubt that the man had died from excessive drinking.”

Picture credits. Tasley church: Photo © copyright Row17, taken from Geograph; adapted, used, and made available for re-use under a Creative Commons licence. Entry in The British Medical Directory, 1853 (composite image from pages 171-2), out of copyright. Arms of the Royal College of Surgeons: image from Calendar of the Royal College of Surgeons of England, published 1880 and therefore out of copyright. Dock Board offices from the Canning Graving Dock, Liverpool: From a painting by J Hamilton Hay in Liverpool (at the Internet Archive website), published 1907 and out of copyright.