The surname Atcherley is, as I wrote in the article which launched this website, “a good old Shropshire name”. However, over the course of Queen Victoria’s reign (and after it), the surname Atcherley became rarer in its native Shropshire, and more frequent in a number of other counties, as members of the family migrated. By 1911, the county which was home to the highest proportion of the Atcherleys recorded in the census was Wiltshire (see Census and sensibility). The man responsible for starting this branch of the ‘clan’ was Edward Richard Atcherley [ 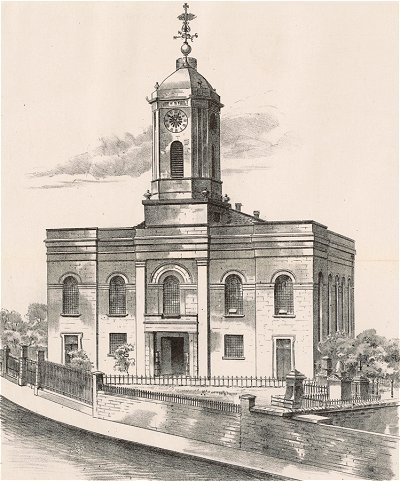 Edward was part of an Atcherley family whose members were not averse to moving elsewhere to better their fortunes. His father, a tailor (also named Edward [

]), was born in the Shropshire countryside but relocated to, and raised his family in, urban Staffordshire. Edward Richard Atcherley, born in Bilston on 4 March 1840 and baptised there at St Leonard’s church (pictured right) on the 22nd of that month, was the first-born child of Edward senior and his wife Martha, née Shaw [

After moves to Sedgley and then to Wednesbury, Edward Atcherley’s family finally settled in Wolverhampton, where they were recorded on the 1851 census. At some point over the next ten years, Edward junior started work. The census of 1861 shows both Edward (aged 21) and his younger brother John [

] (16) in an occupation which was new to the Atcherley family tree, that of forgeman.

Although the term forgeman suggests the possibility that Edward and John may have each been working as (or for) a blacksmith in a small forge, I suspect they were employed in a larger industrial workplace, two of many young men assisting with the manufacture of ironware. Wolverhampton was ideally situated as a location for forges and foundries, having ironstone, coal and lime deposits close by, and good communications for the transportation of its products. However, the iron industry of the Black Country, after reaching its peak in the 1850s and early 1860s, then began to decline.

Was it the onset of this decline that led both Edward and John to look for work elsewhere? Or did they make that choice for other reasons? I don’t know. John made the boldest move, emigrating to the USA in 1865. Edward Richard Atcherley was a little less adventurous and took his metal-working skills to the expanding town of Swindon, in Wiltshire.

The earliest records I have found confirming Edward’s presence in Swindon date from 1866, when he married local girl Elizabeth Weeks [

]. According to a descendant of this line of Atcherleys, Neil Duffill, the wedding ceremony took place at the Register Office in Swindon on 13 October that year.

Elizabeth was born in 1847, at Lydiard Millicent in Wiltshire. The census of 1851 shows that 3-year-old Elizabeth was then living in the village of her birth, with her mother (Mary Weeks, an agricultural labourer, aged 28), aunt (Martha Weeks, also an ‘ag lab’ of 28), sister (Maria Weeks, 11 months), and cousin (Harriet Weeks, 2). There was also a ‘visitor’, Ralph Godwin, an ag lab aged 30. All of the adults in the household were unmarried, and I can’t resist jumping to the conclusion that Mr Godwin may have been the father of one or more of the Weeks children. If he wasn’t Elizabeth’s father, then he became her stepfather in 1852 when he married her mother Mary.

By the time Elizabeth was 13, she had left her family and was working as a general servant in Swindon’s Ship Inn, then run by Bristolian George Smith and his wife. Speculating again, I wonder if it was at the Ship Inn, five years or so later (when she may have been working as a barmaid), that Elizabeth caught the eye of newcomer Edward Richard Atcherley? Another possibility is that the couple met after a cricket match some six months before they wed. The following is an abridged version of a report in The Swindon Advertiser of 23 April 1866:

OPENING OF THE G.W.R. CRICKET CLUB.
SEASON, 1866.
The annual match, eleven versus twenty-two, on Saturday last, was the first appearance on the field this season. […] It was indeed a pleasant sight to see the numbers of working men and their children on the field apparently enjoying the sunshine and the healthy amusements before them. […] At the conclusion of the cricket match another interesting event was arranged,—a Handicap race for an Electro-plated Cup, offered by Mrs. Dixon, of the Cricketers’ Arms. The race was arranged in four heats,—the first being won by Mr. Reece, against Messrs. Wheatley and Atcherley […]. At the termination of the race the members and their friends adjourned to a cold spread in the New Pavilion, provided by Host Smith, of the Ship Inn. […]

The above account provides not only a possible date and place for Edward and Elizabeth’s first meeting, but also a very strong hint as to the identity of Edward’s employer. The Great Western Railway line had reached and extended beyond Swindon in 1840, and the following year the company began building its new central repair works nearby. The site, located a mile away from the town, had been chosen by Daniel Gooch, GWR’s Superintendent of Railways, and backed by the company’s engineer, Isambard Kingdom Brunel.

A Railway Village was built to accommodate GWR’s employees, and from these beginnings New Swindon developed, a town which would remain physically and administratively separate from Old Swindon until 1900. Edward Richard Atcherley set up home there with his wife Elizabeth at 11 Taunton Street, at which address the couple’s first three children were born: Edward John Atcherley [ 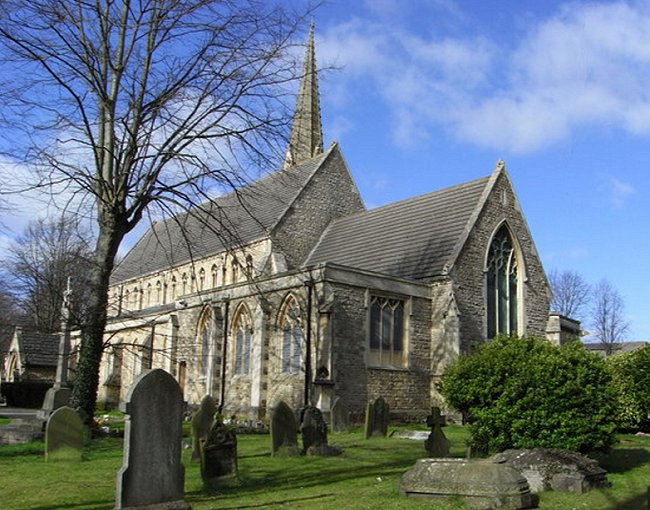 William John Atcherley was baptised at his local church, St Mark’s in New Swindon (pictured above), on 13 December 1869. I suspect he was very ill at that time and his parents knew he did not have long to live. His death was registered before the end of that month. The 1871 census therefore recorded a family of four at 11 Taunton Street: Edward Atcherley senior, age 21, a grinder; his wife Elizabeth, 25; and children Edward (age 3) and George (5 months). The baptismal records for the two boys also recorded their father’s occupation as a grinder, a job that involved finishing metal products with a grinding machine.

Edward junior and George were baptised not at St Mark’s in Swindon, but in the town of Wolverhampton. The ceremonies took place at St Peter’s on Christmas Day 1867 and at St Andrew’s on 28 December 1873 respectively – the second of those two events was in fact a double baptism as Walter Richard Atcherley [

] (born 18 November 1872) was welcomed into the church alongside his brother George. Evidently, Edward Richard Atcherley maintained close ties with his family back in Staffordshire after his relocation to Swindon. His parents must have appreciated his yuletide visits and being able to attend the baptisms of their grandchildren.

Two further visits of this nature followed, but both in the month of July. The baptism of Edward and Elizabeth’s fifth child, Elizabeth Martha Atcherley [

], took place at Wolverhampton St Andrew on 4 July 1875, and that of their next daughter, Martha Ann [

], was conducted there on 7 July 1878. By this time, the children’s grandfather Edward Atcherley had passed away (he died on 9 December 1877), but grandmother Martha Atcherley was still ‘alive and kicking’. Martha Ann was however the last child of Martha’s son Edward to be baptised in Wolverhampton.

Four more children were added to the Atcherley family of Swindon over the following decade: Thomas [

] (1886). It is interesting to note that the birth records of these and of their older siblings nearly all give their mother’s maiden name as Wicks rather than Weeks, contradicting the marriage and pre-marital census records of Elizabeth (in which her surname was spelt Weeks). The records also show some of the family’s changes of address after the 1871 census. Walter Richard Atcherley’s birth, in 1872, took place at 24 Exeter Street, where the Atcherleys remained until at least 1875. But by 1881, the family home was in Albion Street, a street which would house many Atcherleys for decades to come.

During his years in Swindon, Edward Richard Atcherley featured in his local newspaper, the Swindon Advertiser, on several occasions. Some of those appearances show that he got into debt, and was the subject of court orders (in 1874 and again in 1878) to pay money to various creditors, usually in instalments. The sums involved ranged from 5 shillings to £1 0s 3d, the latter being the only amount exceeding one pound. Other reports show that Edward was a member of the 11th Wiltshire Rifle Volunteers. As Corporal Atcherley, he was part of the non-commissioned officer team which beat a team of Privates (by 19 points) in a Friendly Shooting Match in 1873. Then, in 1875, as Private Atcherley, Edward took 39th place in the annual prize shooting meeting of the Corps, winning “3s and a bottle of rum, value 3s 6d”.

On 15 March 1879, the following letter from Edward Atcherley, of “24, Exeter-st., New Swindon”, was printed in the Swindon Advertiser. It told of a dramatic event in the life of one of his children (probably Walter or George):

THE GOLDEN LION BRIDGE.
To the Editor of the Swindon Advertiser.
Sir,―Will you kindly allow me, through the medium of your paper, to tender my most sincere and heartfelt thanks to Mr. A. Skerton for his bravery in rescuing my little boy from drowning in the canal by the Golden Lion Bridge. I would also suggest that the Local Board should do something to make the bridge less dangerous to the 700 or 800 children who pass over it to school.

Edward Richard Atcherley, described as a grinder at a railway factory, died from chronic heart disease on 18 December 1887, at his home in New Swindon’s Albion Street. But thanks in part to the rescue of one his sons in 1879, nine of Edward’s ten children survived into adulthood and most had children of their own. There are Atcherleys, descendants of Edward and Elizabeth, living in Swindon and elsewhere in Wiltshire to this day.