When her husband set off in October 1899 to take part in the South African War (a.k.a. the second Boer War or Anglo-Boer War), Eleanor Frances Atcherley, née Micklethwait [

], did not simply stay at home and wait for his return. Instead, she soon devoted herself to collecting comforts for the troops and, when the opportunity arose, Eleanor went to South Africa herself to be by her husband’s side.

], was a Captain in the Army Service Corps at the time of his departure (my series of stories about him currently begins in 1914, with Major Llewellyn Atcherley and the elusive suffragette). He left behind not only Eleanor, but also their baby daughter Lucy [

] (see Lucy Eleanor Louisa Atcherley: Her life and loves in the spotlight) who was just 10 months old.

], pictured right) at 1 Driffield Terrace in the city of York. It was at that address that Eleanor Atcherley’s work collecting comforts and sending them to South Africa began.

The earliest evidence I have found relating to Eleanor’s involvement in this work is a letter published in the Yorkshire Herald of 10 January 1901. The text (as shown in the digitised copy) is difficult to read in places, but enough of it is legible to see that the author, Winifred Dunne, was “collecting comforts for the non-commissioned officers and men” of the Army Service Corps then serving in South Africa. As she was leaving York (a move which seems to have been connected with the posting of her husband, Colonel Dunne), she announced that “any contributions will be gratefully received on my behalf” by Mrs Speight of Bootham, or Mrs Atcherley of 1 Driffield Terrace, York.

Another letter, from Lady Middleton, printed in the Yorkshire Post and Leeds Intelligencer of 29 January 1900, announced that she was collecting comforts for the regiments of Irregular Horse – but also mentioned that “Mrs. Atcherley will be grateful for any contributions for the non-commissioned officers and men of the Army Service Corps now serving in South Africa, such as shirts, socks, Balaclava helmets, tobacco, etc., or money to purchase the same.”

Eleanor was far from being the only person supporting the men of the Army Service Corps in this way. She was one of several listed as being ready to receive contributions when Lieutenant Colonel Parkyn wrote (in the London Standard of 10 March 1900): “Although a number of useful articles have been sent to South Africa for the Army Service Corps, there is still much need of assistance to make anything like a fair distribution amongst all the companies. The strength is nearly 4000, and scattered over a very large area.”

The appeals kept coming, with the following – from the Transport Office at the Royal Arsenal in Woolwich featuring in several newspapers including London Daily News and The Daily Telegraph on 1 May 1900:

Comforts, especially in the way of warm underclothing, cardigans, and socks, or money to purchase them, are much needed for the Army Service Corps. It is feared the generous public do not realize that this corps has now over 4,000 men at the front, and that the arduous nature of their duties causes a great amount of wear and tear, for when other troops may be resting, their work continues without intercession. Colonel Ward has wired to his sister from Bloemfontein asking for assistance in this way. We have been able to send out a fair supply, but nothing in comparison to the requirements of such a large body.

“Mrs. Atcherley, 1, Driffield-terrace, The Mount, York” was one of ten ladies and military men who were standing by to grateful receive donations from the public.

I do not know how successful these appeals were. I do however know of one piece of feedback from the front – from Llewellyn Atcherley himself. The following appeared in the Yorkshire Post and Leeds Intelligencer of 29 May 1900:

COMFORTS FOR THE ARMY SERVICE CORPS.
Captain Atcherley, Army Service Corps, writes from Bloemfontein, that he received four cases of comforts for the Army Service Corps about the middle of April. He says the gifts were most gratefully received by the recipients, as the cold weather was just beginning, and the men’s clothes were little else but rags. He begs to thank all those who so kindly contributed the gifts. The pillows and slippers he specially mentions as being very much appreciated at the Raadzaal Hospital for the use of the sick and wounded.
Mrs. Atcherley will be glad to receive and forward any further contribution for the Army Service Corps if sent to 1, Driffield Terrace, York.

On the subject of hospitals treating British (and allied) casualties in South Africa, Eleanor Atcherley contributed (albeit in a small way) towards the cost of some essential equipment for one of them – equipment which had at that time only recently been invented. The following appeared in the York Herald on 2 February 1900:

THE YEOMANRY HOSPITAL.
THE RONTGEN RAY APPARATUS.
The Yeomanry Hospital, which owes its foundation to the efforts of Mrs. Adolphus Duncombe, and which is sure to prove invaluable in the treatment of the wounded at the front, will not be completely fitted until it has a Rontgen Ray apparatus. It is absolutely essential that it should be supplied with one, or the efforts of the surgeons to locate the bullets in gunshot wounds will be seriously hampered. Amongst the first to make an effort to raise funds for the purchase of the apparatus is Mrs. Unett, of Huntingdon Hall, York, and she organised an entertainment for that purpose. It took place yesterday in the De Gray Rooms, York, and proved a magnificent success. […]

Among the guests at Mrs Unett’s entertainment were one Mrs Atcherley, and also a Mr Key, who was most likely one of Eleanor’s cousins (her mother’s maiden name was Key).

If you haven’t already guessed, the Rontgen Ray apparatus which Mrs Unett was raising funds for was a primitive x-ray machine. Named after Wilhelm Röntgen, who discovered x-rays in 1895, the usefulness of this apparatus to military surgery was soon evident. The evolution of military weapons and ammunition in the latter part of the 1800s meant that bullets no longer left obvious gaping wounds when they hit, but instead only a small entry wound. Attempts to locate such bullets (if they had not passed straight through the victim’s body) could cause further, needless damage – so the ability to use Rontgen or x-Rays to detect them must have been seen as a godsend. 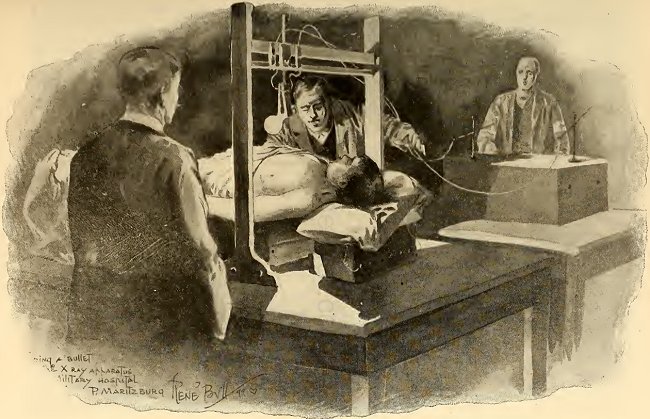 The apparatus was deployed in general hospitals during the South African War, and doubtless helped surgeons to treat many wounded soldiers. However, as you can see from the illustration above, showing x-ray apparatus in use at the military hospital at Pietermaritzburg in 1899, there was no protection against radiation. The pioneers of the use of radiography must have suffered greatly from its effects.

Eleanor Atcherley’s support for the troops serving in South Africa extended also to the families of some of them. A letter from Eleanor dated 9 July 1900, printed in the Yorkshire Herald the next day, provides an illustration of this:

A CASE FOR ASSISTANCE.
(TO THE EDITOR OF THE “YORKSHIRE HERALD.”)
Sir, —The following case has been brought to my notice, and my assistance requested. If any of your readers would feel inclined to assist, I would gratefully receive and acknowledge any contributions sent to me at this address.
An old couple, crippled by rheumatism, have been for the past few years  almost entirely dependent on their son, a private in the 1st Gordon Highlanders. They have just heard that he has died at the front.
During his absence in South Africa, the old couple have been receiving an allowance of 8s. per week from the Soldiers’ and Sailors’ Families Association; but with the death of their son this must cease, and they have no prospect before them but the Workhouse.
The Committee of the South, East and West St. Pancras Divisions of this Association, who have investigated the case thoroughly before making the allowance, and know the old couple to be most respectable and deserving, are most anxious some provision should be made for them.
It is, therefore, proposed to continue the allowance of 8s. a week out of any money they may receive from the various funds (Patriotic, “Daily Telegraph,” and Imperial War Fund), and private sources. All the funds have been applied to, but as they reserve their annuities for widows, all that parents receive is a small sum of ready money—about £6 or £7 will be the utmost that will be given by all the funds together—therefore, it is necessary to supplement this by private contributions. Whatever sum is raised will be placed in the hands of the lady who has hitherto been visiting the couple as almoner for the S.S.F.A., and who has herself guaranteed 2s. 6d. a week. When the capital is exhausted, she will again apply to the public. She will be glad to forward a statement of sums received to any intending contributor.
In the event of both old people dying before all the money received has been expended, it is hoped contributors will consent to the balance being handed over to the Mansion House War Fund.—Believe me, yours, etc.,
ELEANOR F. ATCHERLEY.
Driffield-terrace, The Mount, York 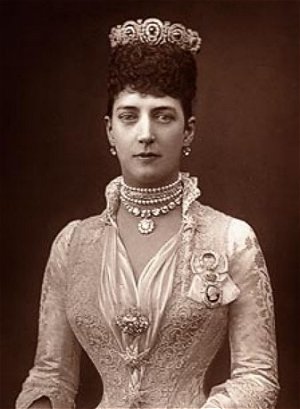 From the newspapers of 1900 I have found brief details of two other events in Eleanor Atcherley’s life that year. The first, which took place on 25 May, was I’m sure a particular highlight: Eleanor was presented to the Princess of Wales (Alexandra of Denmark, pictured left around 1889) at a Drawing Room held by the command of Queen Victoria. The London Standard noted that “Presentations to her Royal Highness at this Court are, by the Queen’s pleasure, considered as equivalent to presentations to her Majesty.” The second event was no doubt a pleasure of a different kind – Eleanor was keen on painting, and in August 1900 she was noted as being amongst “other local exhibitors” whose works were displayed in the York Corporation Art Galleries.

It was the transfer of Llewellyn – now Major Atcherley – to Kitchener’s headquarters staff towards the end of 1901 which gave Eleanor the opportunity of joining him in South Africa. She sailed by the RMS Carisbrook Castle, which departed on 30 November. The couple returned together some ten months later, by the Scot, which arrived at Southampton on 20 September 1902.

I would love to know more about Eleanor’s time in South Africa. It is certainly something about she which spoke, and in public too. According to the Leeds Mercury of 24 March 1900: “Opening an exhibition of cookery at Normanton Central Schools last night, Mrs. Atcherley, wife of the Chief Constable of Wakefield [gave] a humorous description of her household experiences in South Africa when with her husband at the Boer War […]”. Oh to be able to travel back in time and listen in to Eleanor’s talk!

> On to Eleanor Frances Atcherley and the Wakefield Women’s Suffrage Society – Part 1.

Picture credits. Frances Eleanor Micklethwait, née Key: Image from the Micklethwait Genealogy website (Some of my Ancestors and Relations); used by kind permission of John Micklethwait. “Finding a bullet with the X-ray apparatus at the Military Hospital, Pietermaritzburg”: From The Black and White Budget, 9 Dec 1899, page 23; out of copyright. Alexandra of Denmark, Princess of Wales: From a public domain image at Wikimedia Commons.