] very kindly entertained the members to tea, preceded by a Suffrage debate. Miss Fielden championed the cause, and Miss I. O. Ford [pictured right] was kind enough to appear as an Anti-Suffragist—a real one who would debate could not be found. […] The annual meeting was held in the Wakefield Assembly Rooms on March 16th, Mrs. Lee presiding. Mrs. Atcherley was unanimously elected chairman of committee […]

The loss of the Conciliation Bill in 1910, when the Liberal government of Herbert Asquith called another general election, was a blow to the women’s suffrage movement – but one from which it quickly recovered. In her memoir, The Women’s Victory – and After, Millicent Fawcett wrote: “On November 12th, in anticipation of the second General Election in 1910, Mr. Asquith gave a pledge in the House of Commons that his government would, if still in power, give facilities in the next Parliament for ‘proceeding effectively’ with a Bill to enfranchise women if so framed as to permit of free amendment.”

And so, in the hope of securing another Conciliation Bill in 1911, members and affiliates of the National Union of Women’s Suffrage Societies worked to promote their cause both during and after the election of December 1910. The affiliates of course included members of the Wakefield Women’s Suffrage Society, which Eleanor Atcherley would soon chair. The Society’s report in The Common Cause of 5 January 1911 read:

We were very busy during the election. Both our candidates declared themselves at their public meetings as supporters of the Conciliation Bill, so we did propaganda work only. Much interest was shown in our Suffrage shop, which was in a central position in the town. Literature was distributed and sold, and a highly successful open-air meeting was held in the Bull Ring on December 2nd; in spite of the intense cold a large crowd listened most attentively to Miss Fielden, and a resolution in favour of Women’s Suffrage was carried unanimously. This meeting was followed on the 20th by another in the Church Institution, Miss Fielden again being the speaker, and Mr. Lodge Hirst, a member of the Corporation, presiding. He declared himself a convinced supporter of the Suffrage cause. Miss Fielden, after a delightful speech, proposed a resolution in favour of Women’s Suffrage. This was seconded by the Wakefield secretary (who gave a short account of the progress of the Society, which now has ninety-nine members), and carried unanimously. A good collection was taken, and four new members joined the Society.

The Liberals, under Asquith and with support from the Irish Nationalists, were returned to power. Among their MPs was Wakefield’s Arthur Marshall, who was “prepared to support the Conciliation Bill or a similar Women’s Suffrage measure”, but not prepared to ballot for a Private Members Bill to reintroduce the Conciliation Bill. 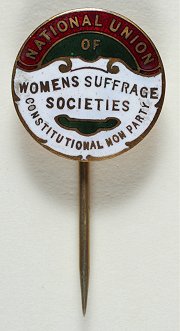 However another MP, Sir George Kemp (Liberal, Manchester North West) was willing, and did so when the opportunity arose. The formal title of his proposed legislation was the Women’s Enfranchisement Bill. This was a modified version of the previous year’s Bill, with changes made to meet some of the objections which had been raised. Its Second Reading took place in the House of Commons on 5 May 1911. At the division, 255 MPs voted in favour and 88 against – a much bigger majority (167 compared to 110) than that received by the Bill of 1910.

On 9 May 1911, four days after the second reading of the Conciliation Bill, Eleanor Atcherley hosted another meeting of the Wakefield Women’s Suffrage Society. Originally advertised as “Mrs. Atcherley’s Drawing-room Meeting”, it was afterwards referred to as a “garden meeting” – good weather must have prompted the move from indoors to out! The meeting was addressed by a Mrs Cowmeadow (possibly the Ilkeston organiser for the NUWSS), who had just started a “fortnight’s special campaign” for the Wakefield society. In The Common Cause of 25 May 1911 it was reported that:

Mrs. Cowmeadow has addressed the Women’s Liberal Federation; and, at a public meeting held in the Church Institute, she and Mr. F. Stanton Barnes made most excellent speeches in support of the usual resolution, which was passed unanimously. In the unavoidable absence of Councillor E. Lodge Hirst, the Rev. H. T. Davies kindly took the chair, and spoke earnestly and hopefully of the justice of our cause. Mrs. Cowmeadow is canvassing the City Council, and we hope it will pass our resolution.

The nature of the resolutions mentioned above was spelled out in a later edition of The Common Cause, which also gave further details of the results of Mrs Cowmeadow’s campaigning in Wakefield:

About 50 members have been enrolled as a result of Mrs. Cowmeadow’s campaign here and the local Men’s Liberal Association passed a resolution by 67 to 3 asking the Government to grant facilities for the passing of the Conciliation Bill. In consequence of the refusal of the Town Council to consider a Women’s Suffrage resolution a deputation of 28 women ratepayers attended the Council meeting on the 13th June. As the Council declined to receive this deputation an indignation meeting was held, 12 of these ratepayers joining the Suffrage Society. Full accounts and several letters were sent to the Press. The Council by its action has helped the Suffrage cause and it will probably now bring forward a resolution itself without further outside pressure.

An overview of the Wakefield Women’s Suffrage Society in The Common Cause of 26 October 1911 listed the society’s committee in full. Were any of these women one of your ancestors?

By this time the society had 156 members and was affiliated not only to the National Union but also to the West Riding Federation. No doubt all of its members were hoping for the success of that year’s Conciliation Bill. Disappointment was just around the corner however. NUWSS President Millicent Fawcett later described it in the following words:

Then came, quite suddenly, a characteristic blow from Mr. Asquith. On November 7th, 1911, in answer to a deputation of the People’s Suffrage Federation […], Mr. Asquith stated that he intended to introduce an Electoral Reform Bill during the coming session of 1912. This Bill was to be on very wide lines; all existing franchises were to be swept away, plural voting abolished, and the period of residence materially reduced. The vote in this Bill was, Mr. Asquith said, to be based on male citizenship. His exact words were: ‘We believe a man’s right to vote depends on his being a citizen, and primâ facie a man who is a citizen of full age and competent understanding ought to be a entitled to a vote.’

When pressed as to what he intended with regard to women, Asquith is said to have “dismissed the inquiry with the curt remark that his opinions on the subject were well known, and had suffered no modification or change during the last few years.”

Asquith’s position implied that women of full age would be denied the right to vote as they were not of “competent understanding”. This was taken by suffragists not only as a complete denial of the rights they were fighting for, but also as a slur against women. In the words of Millicent Fawcett: “If this attitude on Mr. Asquith’s part was intended to provoke a renewed outburst of militantism, it certainly had the desired effect.” 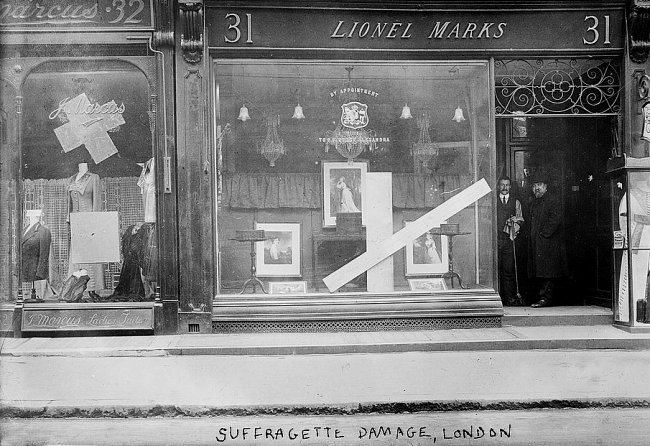 Asquith later protested that the progress of the Conciliation Bill would not be affected by his proposed ‘manhood suffrage bill’. Lloyd George meanwhile stated that he would be prepared to introduce an amendment to the bill enabling women’s suffrage – but also told a meeting of Liberals in Bath on 24 November 1911 that the Conciliation Bill had been “torpedoed”.

The WSPU’s truce – and a great many windows – had by that time already been broken, with 220 women and three men being arrested as a result of their stone-throwing on the evening of November 21st. On the 15th of the following month Emily Wilding Davison set fire to her first pillar box, after which she was sentenced to six months in prison.

The Conciliation Bill of 1911 made no further progress, and another Bill introduced in 1912 was defeated at its second reading by 208 votes to 222. Clearly, by that time many MPs had lost their appetite for women’s suffrage. Was the renewed campaign by suffragettes of damage to property and heckling of government ministers at public meetings partly to blame?

The impact of militant suffragettes, on the ‘constitutional’ NUWSS and the wider campaign for the enfranchisement of women, was mixed. It was (and still is!) the suffragettes who captured people’s attention and focussed it on the campaign for ‘votes for women’. On the one hand this probably strengthened the resolve of anti-suffragists and doubtless turned others against the cause (both within and without Parliament), particularly as the suffragettes’ actions became more extreme. On the other hand it also attracted increased support from many women who had previously stood on the sidelines. Membership of the NUWSS was swelled by those who wanted to get involved, but who would not or could not engage in militancy (the organisation had over 500 branches and 100,000 members by 1914). However the NUWSS also took a lot of flack for the actions of the suffragettes, despite distancing themselves from their law-breaking.

Was Eleanor Atcherley’s contribution to the Wakefield Women’s Suffrage Society one of the casualties of what many must have seen as the growing menace of the suffragettes? In the first part of this story we saw that Eleanor was described in a newspaper report as the “wife of the Chief Constable of Wakefield”. Her husband, Major Llewellyn William Atcherley [

], was in fact Chief Constable of the whole of the West Riding of Yorkshire. While in that office he would himself come up against the great escapologist of the suffragette world, Lilian Lenton (see Major Llewellyn Atcherley and the elusive suffragette).

Although the NUWSS and its affiliated societies (including Wakefield’s) were non-militant, I suspect that over the course of 1912 Eleanor’s position as Chair of her local women’s suffrage society became increasingly incompatible with her other role, as the wife of a Chief Constable. In a report from the Wakefield society in The Common Cause of 22 August 1912 (which now had the words “NON-MILITANT” printed at the top right corner of its cover) it was announced that “Mrs. Atcherley has unfortunately felt obliged to resign her position as Chairman”. 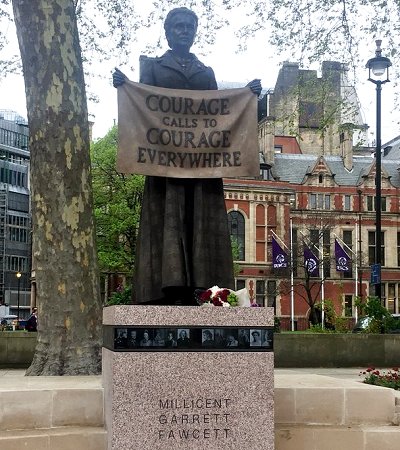 Millicent Fawcett of course continued to campaign for the enfranchisement of women, along with the NUWSS and local societies at Wakefield and elsewhere. Although the campaign did not yield results before the First World War broke out, both Millicent and Eleanor saw many women given the vote in the Representation of the People Act 1918 – and both lived to see the vote given to women on the same terms as men in 1928.

Today, 24 April 2018, I remember the contribution to the cause made at a local level by Eleanor Frances Atcherley with the publication of her story – at the same time as Millicent Garrett Fawcett’s contribution at a national level is commemorated by the unveiling of her statue in Parliament Square.