An annual ‘Bluebell Walk’ became something of a tradition for Mum [

] and I during the last few years of her life, although there were one or two years when the walk wasn’t possible because Mum was too ill (one year we went for a ‘Bluebell Drive’ instead). Now, Mum is no longer here to walk with me – but I can still trek through the trees of our favourite wood and enjoy the sights, sounds and smells of nature for both of us. So yesterday, I did exactly that. 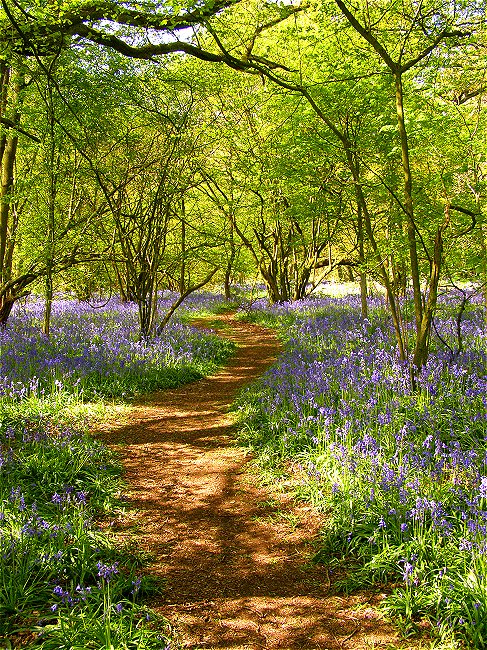 The venue for our Bluebell Walks was, and is, one which is easily accessible by road, which was just what Mum needed. It does make the wood a very popular place of course, meaning that when the bluebells are in flower, finding a parking space can be tricky! So I set off early yesterday and was rewarded with a good parking spot and, for a while, a sea of bluebells almost to myself.

While bluebells predominate, they are not the only flowers on show. There is also a profusion of stitchwort, its white blooms contrasting beautifully with the blue. In the darker and damper places, flora from earlier in the season such as wood anemones and lesser celandines still survive, though for the most part they look a little bedraggled. Elsewhere, the gorgeous yellow archangel and deep pink hue of red campion flowers can be seen. If there was one thing Mum loved, besides her family, it was a dazzling display of flowers: our woodlands in the Springtime certainly provide that! And while the forest floor is awash with colour, the trees themselves and the air above them resonate with birdsong. Native wrens, robins, blackbirds, chaffinches and great tits are joined by melodious migrants such as willow warblers, chiffchaffs, blackcaps and garden warblers (I always have trouble distinguishing the songs of the last two!). I would often hear my first cuckoo of the year during my Bluebell Walk with Mum.

Along the edges of the wood are views across pasture bejewelled with buttercups, and a patchwork quilt of fields and hedgerows beyond. As I listen to the skylarks serenading me in the sky above, I look at the cattle and remember than Mum’s grandfather Samuel Atcherley was, at the time of the 1911 census, a cowman and that his farming forebears kept their own cattle. I also wonder what he would make of his vegan great grandson! Among the wildlife wonders to be enjoyed on a Bluebell Walk are butterflies. Yesterday I was treated to views of peacock, small tortoiseshell, orange tip, speckled wood and a couple of brilliant brimstones (one of which settled and posed long enough for me get the photo above). I suspect that Mum was not the only member of the Atcherley family to appreciate sights such as these. Llewellyn William Atcherley, when Chief Constable of Shropshire in 1906, was elected a member of the Shropshire Archaeological and Natural History Society (according to that Society’s Transactions). Copies of the Annual Report & Proceedings of the Chester Society of Natural Science, Literature & Art show that “Mrs. R. Atcherley” (Caroline, the widowed Mrs Richard Atcherley) was a member of the Society from 1909. In 1914 her daughter Hope Atcherley was listed as a junior member, having joined in 1913, and in 1915 she was listed below her mother as an adult member while her younger sister Hester Atcherley appeared in the list of Junior Members. Going even further back, the London Daily Post of 18 October 1740 shows that the library of lawyer Roger Atcherley (or Acherley as his name was usually written), which was to be sold following Roger’s death earlier that year, included Eleazar Albin‘s natural history volumes on birds and spiders. 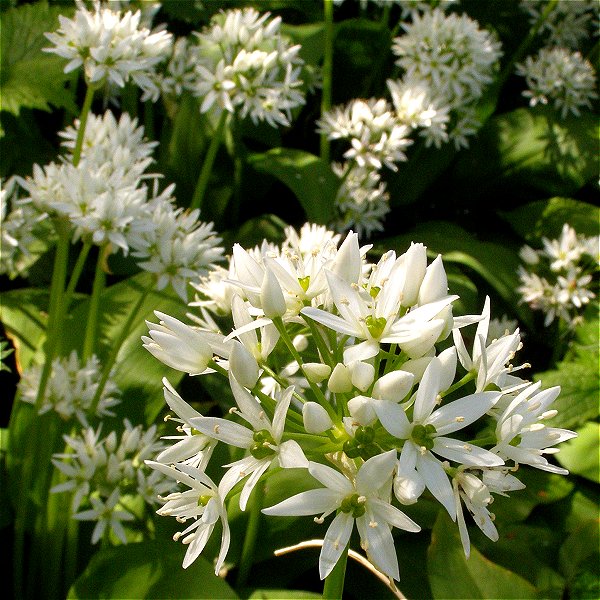 After our Bluebell Walks I would often drive Mum home via a small copse which, instead of being full of bluebells, is packed with ramsons. On a warm Spring day, with the car windows down, the nose detects these pungent plants before the eyes do: an alternative name for the species is wild garlic. The experience is almost one of olfactory overload, but both Mum and I enjoyed the aromatic assault! It turns out though that I need not have taken a detour en route home, because last year I found a small patch of ramsons in a corner of our Bluebell Walk wood. I made the discovery when taking family members into the wood by way of an access point I don’t usually make use of, on the evening last May when we scattered some of Mum’s ashes and I read out the following short verse:

In this glade, in the shade
In this special place
Is where we will remember
A mother’s smiling face. 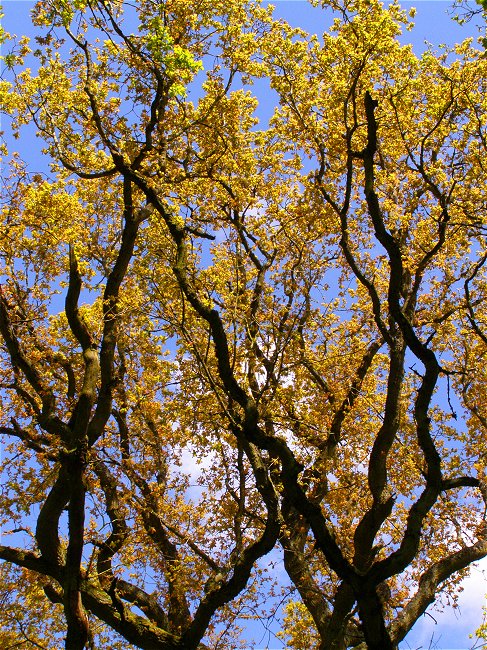 As my Bluebell Walk neared its end yesterday, I looked up at the twisted branches of the oaks overhead, thought of the twists and turns of the branches of Mum’s Atcherley family tree, and remembered with pleasure meandering at leisure, with Mum, through this wonderful wood. A happy coincidence of natural history and family history. Soon, the foliage will filter out much of the sunlight and the flush of Spring flowers will be over. But next year, the bluebells will be back – and so too, I hope, will I.