Most of the records relating to James Rennell Atcherley [

] of Bridgnorth, Shropshire, show that he was a veterinary surgeon. Some, though, provide evidence of a secondary occupation which would have supplemented James’ income, that of an innkeeper or publican. These records include newspaper reports of cases at the Petty Sessions at Bridgnorth, in which James had suffered trespass or was the victim of theft. In one newspaper report however James was the guilty party, his crime being “Conspiracy arising out of the Election for Town Councillors” at Bridgnorth. It seems James Rennell Atcherley was not a supporter of “the Conservative interest”!

Among the records which described James as an innkeeper were entries in the baptism register of Bridgnorth St Leonard (church pictured right) for two of James’ nine children. The entries in question were those for Lucy Atcherley in 1845 and John Atcherley in 1846. Directories, which initially listed James Rennell Atcherley only as a veterinary surgeon (from as early as 1828) are another source.

Pigot’s Directory of Shropshire for 1844 is the earliest such publication I have found which also includes James (albeit with his name written as James Rundell Atcherley) in the Taverns & Public Houses section. James was then running the New Inn at St Mary Street – while his widowed mother-in-law Frances Broadfield (nee Wharton) was landlady of the Red Lion at Underhill Street (where she was enumerated on the 1841 census).

Along with another publican listed in Pigot’s 1844 directory, Mrs Whitefoot of the Raven Inn, “Mr. Atcherley, of the New Inn” had served a “sumptuous dinner” to over 170 members of “Lodges in connection with the Independent Order of Odd Fellows (M.U.) Bridgnorth” on 6 June 1843. This event was mentioned in Berrow’s Worcester Journal. The same newspaper, on 24 August 1848, reported on the Bridgnorth Petty Sessions as follows:

On Monday, the 21st instant, two lads named William Walford and Joshua Suaine, were charged by police-officer Evans, with trespassing on lands in the occupation of Mr. J. Atcherley, of the Swan Inn. It appeared that from ten to twenty persons have for a long time made a practice of going into Atcherley’s field to play at cricket on Sundays , and it had been determined to put a stop to it. The lads admitted the offence, and were sent to prison for fourteen days. 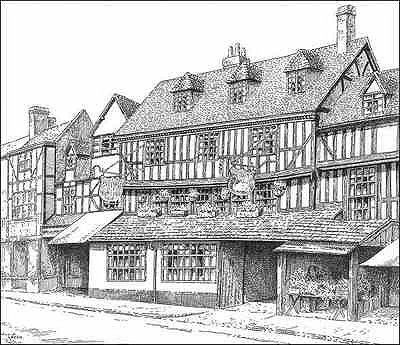 We learn two things from this report. First, by 1848 James Rennell Atcherley had left the New Inn, St Mary Street, and had taken on the Swan Inn (pictured left; also known as the Swan Hotel) in Bridgnorth’s High Street. (He was still there in 1851, as shown by the History, Gazetteer & Directory of Shropshire published that year and by the census.) Second, back in the 1800s a very dim view was taken of lads playing cricket on Sundays! This latter point is reinforced by another case heard at the Borough’s Petty Sessions in 1849. The Hereford Times’ account of the case follows verbatim, but is broken into paragraphs for ease of reading:

William Wareford, a lad of 14 or 15 years of age, was next charged with playing at ball, on Sunday, the 18th March last.—The same witness was examined to prove this offence, which was committed in a field, in the occupation of Mr. Atcherley, and which adjoins the vicinity of Friars’ Lane. The Magistrates, finding the offence was not committed in a street or lane in the town, consulted together for some time, when they came to the decision that, although the field was within the borough, and a foot path went through it, it was not a “public place” within the meaning of the Bye-laws, and the case must consequently be discharged.

The Mayor, addressing the defendant, said that it was a pity, and very much to be regretted, that the occupiers of land upon which so many persons trespassed, on Sundays in particular, for the purposes of playing at ball, pitch and toss, and many other games, did nor more vigilantly prosecute the parties for trespass. It was the intention of the Bench to severely punish all persons brought before them for in any way breaking the Sabbath. It was a very great pity the defendant, and many more of his age and circumstances, did not know how to spend their Sundays in a proper way.

The defendant was not to consider the present case as done with, for it was quite open for Mr. Atcherley to take out a summons for trespass if he thought it proper. There could be no doubt if the lads were brought before them for trespass, and the Bench would afford occupiers of land every facility for taking up the matter with earnestness, the practice of playing all sorts of games on Sundays, now so extensively prevalent, would be effectually put down.

The Hereford Times’ coverage of the Bridgnorth Petty Sessions went on to describe another case involving  James Rennell Atcherley (one which Berrow’s Worcester Journalalso reported on).  A man named John Jones, who was “apparently 70 years of age,” was accused of stealing a legging, valued at 4 shillings, property of James R Atcherley of the Swan Inn.

This was not John Jones’ first brush with the law. He had been imprisoned at Worcester in 1829, had since been transported, and during the period of 18 months since his return to England he had spent six days in prison at Kidderminster! The Bench at Bridgnorth now heard the following depositions:

Mary Foxall deposed: I am servant to Mr. Atcherley, who lives at the Swan Inn; on Saturday morning the prisoner came into the kitchen, about 8 o’clock, and had a pint of ale; I saw the leggings hanging up, one on each side of the kitchen fire place, at half-past 8 o’clock on Saturday morning; I went into the breakfast-room, where I remained for a short time, and when I came out again I missed the old man; the prisoner is the man who was in the kitchen in the morning.

Emma Atcherley deposed: I am the wife of J. R. Atcherley; I hung both the leggings up to dry on Friday evening, and I missed the one on Saturday morning; the legging now produced is my husband’s property.

Edward Jones deposed: From information I received late on Saturday night, I went to Clap Wicket, about 6 miles beyond Cleobury North, where the prisoner lived; I took Mr. Atcherley’s son with me; at the prisoner’s house I pulled out a drawer, and found the legging now produced; I then took the prisoner into custody.

John Jones was committed for trial at the next quarter sessions on 29 June. His trial did not however take place. Having spent about 10 weeks in Bridgnorth Borough Prison, Jones died there on Monday 18 June 1849 – his age now given as 74. At his inquest the following day, “Mr. Martin, surgeon, said that the deceased was attacked with a disease in the throat and neck, and notwithstanding every assistance was rendered by himself, Mr. Phillips, and Mr. Smith, surgeons, the deceased was not able to resist its virulence, but died on congestion of the lungs.” 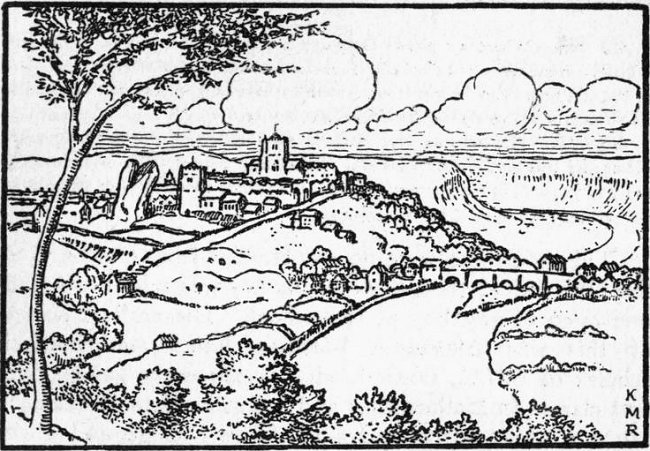 Bridgnorth (From an Old Water-colour) – not the sleepy place it might appear to be.

I first became aware that James Rennell Atcherley had himself been ‘up before the beak’ when Ancestry added the UK National Archives’ Criminal Registers to their wide range of online records. James’ misdeed was recorded in the Register of all Persons charged with Indictable Offences at the Assizes and Sessions held within the County [of Salop] during the Year 1839. He was found guilty of “Conspiracy arising out of the Election for Town Councillors” along with William Philimore Stiff, James Colley, John Price, Thomas Milner, William Crowder, Richard Taylor, John Furber, Thomas Roberts and Samuel Insell. It was however Findmypast that eventually provided the full story of what this crime involved, when it made digitised copies of the Hereford Journal available .

James and his partners in crime were among 52 men and one woman whose trials took place at the Assizes held at Shrewsbury on 24 July. The other prisoners included several who were sentenced to transportation, for periods ranging from seven to 15 years, for stealing livestock or property. Many others who were convicted that day received custodial sentences, of between 14 days and two years. But what of James Rennell Atcherley and his co-conspirators? The Hereford Journal reveals all:

J.R. Atcherley, publican, W. P. Stiff, medical student, and five other individuals pleaded guilty to an indictment for a conspiracy, and imprisoning James Giles, a voter in the Conservative interest at the Municipal Election at Bridgnorth, on the 1st of November 1838. It appeared that the defendants mixed some stupifying drug in the prosecutor’s ale, which sent him to sleep, and they then locked him up in a room, when being awoke by a band of music in the street, he appeared at the window and demanded to be liberated, upon which the defendants and others came up and dragged him away from the window, and beat him, and forcibly detained him until the election was over.

The Judge said it was fortunate for the defendants they had adopted the wise course of admitting their guilt, for in the event of their being convicted, of which there was no doubt, he should have felt it his duty to give them a severe and exemplary punishment, in order to teach them and others that they were not to trespass upon the freedom of election with impunity; they were discharged on their own recognizances of 100l each, and undertaking not to be guilty of similar conduct again, nor to commit any other breach of the peace.

Local elections back in those days clearly generated considerable excitement (at the same Assizes, 12 men were found guilty of “Riot, arising out of the Election of Town Councillors”). The ‘punishment’ meted out in respect of James Rennell Atcherley’s conviction may seem a light one, in comparison to imprisonment or transportation, although it should be noted that £100 in 1839 would be worth more than £4,500 today. James’ involvement in an electoral conspiracy also appears – at least so far – to have been the only stain on his otherwise good character.

To read about James’s life as a veterinary surgeon, go on to James Rennell Atcherley: A life and death with horses – Part 1.

Picture credits. St Leonard’s Church, Bridgnorth: Photo © Copyright Mat Fascione; taken from Geograph, adapted, used and made available for re-use under a Creative Commons licence. The Swan, Bridgnorth: Picture by William Albert Green (1907 – 1984); taken from Historic Buildings in Art, which allows the downloads for non-commercial use with an acknowledgement. Bridgnorth (From an Old Water-colour): from page 217 of Memorials of Old Shropshire, published 1906 and out of copyright.