Camp Dick Robinson, Nov. 10, 1861. Mr. Editor:—If there is any truth in the old adage, ‘Laugh and grow fat,’ I advise those of my friends who are in a delicate state of health to travel with all speed for Camp Dick, take their stations under one of the trees, and watch our boys as they are engaged in the somewhat hazardous task of breaking mules. 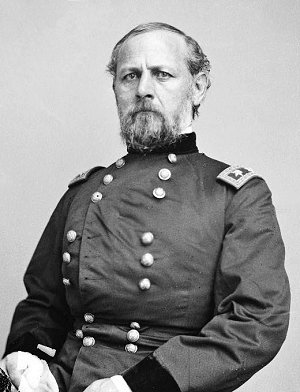 ] to the editor of his local newspaper back home in Newark, Licking County, Ohio. James was at Camp Dick Robinson in Kentucky with Company H of the 31st Ohio Volunteers. The 31st was part of the 12th Brigade of the Union’s Army of Ohio, which was then commanded by Major General Don Carlos Buell (pictured left). James’s service was in its early weeks, he was yet to see action in the Civil War.

Encounters with Confederate secessionists, or sesech as they were known to James and his compatriots, would come soon enough. But in the meantime there were mules to be broken and, for the officers at least, dancing to be done and good food to be had. All of these activities provided entertainment which James was happy to report in his correspondence to those left behind in Newark . Once again I have transcribed verbatim, but have added extra paragraph breaks for ease of reading.

Here is a mule with a long rope tied to his head, his fore feet thrown forward, resisting the persuasive influence of the boys at the other end of the rope.  Yonder is another whose hind feet can be seen for a moment raised horizontally in the air, and then off he goes at a double quick, kicking at any and everything which happens to be in his way.—There again are four mules attached to a wagon, said wagon being full of soldier boys, with a boy riding one of the fore, and another one of the hind mules, dashing through the camp at railroad speed, and only coming to a stand-still when brought up by the fence or a tree.

We have been having some fine times here between the mules and dancing.  Oh yes!  I must tell you about that dance, it was a grand affair I can assure you, and one in which the good of all who were connected with it was shown by the neatness which was visible in all they did.

The platform was built just outside the line; arches were built over this and tastefully festooned with evergreens, while the whole was covered with canvass. On one side of the stage, upon a raised platform, sat the orchestra, consisting of two violas, two guitars, and a violencello. It was about eight o’clock, I think, when our officers and their fair partners began to arrive, and at about nine

‘Music arose with its voluptuous swell,
Soft eyes looked love to eyes which spoke again,
And all went merry as a marriage bell.’

I believe I did caution the young ladies of Newark and vicinity who may be interested in the doings of the officers of Company H; and after seeing the captivating creatures by whom they were surrounded, I would recommend them to keep a sharp look out for the hearts of the sweet fellows, (I mean the officers.)

Quadrille after quadrille was danced, (for it seems that they do not indulge in any fancy dances here,) until after 12 o’clock, at, or about which time the windows of heaven were opened, and the earth was visited by rain. But I forgot to tell you that the table upon which the supper was spread, had been placed just outside the tent, so that when the committee of arrangements heard it rain, they made a break for it.

Calling on some privates who stood near to assist them, they seized it and were carrying it inside the tent, when crack it went right in two, forming platoons, upon which the privates gallantly charged, and ‘tis said that when the list of casualties were summed up, it was found that they had sustained the loss of three turkeys, three hams, one bucket of pickles, some almonds and raisins, and some small cakes.

Now I could pretend to say where they went to, or what became of them, but I know that mess No. 1 drew extra rations for two or three days after. But most of the supper was conveyed safely inside, upon which the dancers feasted; when again the dance was resumed with renewed vigor, and kept going until three o’clock, when the darling creatures who had contributed so much to the pleasures of the evening, were conducted home by the pleasure tired officers.

I have heard it said that the society of ladies has the same effect as music, which is to soothe even the savage. But since the day after the dance I have doubted the truth of this assertion, for I know that our officers have been as savage as—as mules. (they will please excuse the simile, for I can think of nothing else just now.) But the dance was a complete success, and we, that is the high privates in the rear rank, hope they will have another on the strength of it. 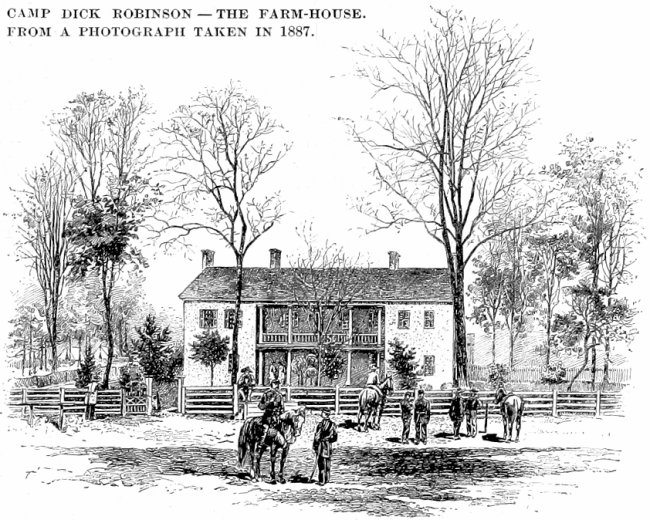 The state of Kentucky was supposed to be a neutral party in the Civil War, a consequence of having a pro-Confederate Governor but a pro-Union Legislature. But its location within the Western theatre of the war made Kentucky a critical state for both sides, and its neutrality was largely ignored. The Union side had the upper hand, but by no means did everything go its way in these early days of America’s fight with itself.

The following letter, sent from Lancaster, Kentucky by James Roger Atcherley on 10 December 1861, gives an indication of some of the backwards-and-forwards movements the Union forces were obliged to make as the year drew to an end.

The day after posting to you my last letter, our regiment received orders to march for Somerset, where Madame Rumor had it that biggest kind of a fight was raging. We were, as you know, at the bridge at this time; but shouldering our muskets and strapping on our knapsacks, we did some tall walking and arrived at camp about 9 P.M. The next morning the whole regiment moved southward, but when we arrived at this place, an order was received countermanding the one we were executing, ordering us back to camp Dick Robinson.

We staid here all night, and the next morning we were drawn up in line and the order was read to us, which was received with numerous groans and shrieks. But march back we did, and that through mud about six inches deep. But it was a cheerful march after all, for rumors were afloat to the effect that the reason of this backwards march was that our forces had thrashed the rebels and were no longer needed; and, as we could account for it in no other way, we were forced to believe it.

But after we had been in camp a few hours, I was told by one of our officers that a dispatch had just arrived to the effect that our forces had been compelled to retire, having been outnumbered, so that there had been a great blunder made by somebody, but I suppose when it comes to be investigated no one who is responsible will be found.

Yesterday, the 9th, companies H, K and B were ordered back to Lancaster, where we now are.

It seems that the same report that we had heard concerning the success of the rebels had reached this place, upon the strength of which the secesh here took it into their heads that they would drive all those who yet love and stand up for the old flag out of town, but the appearance of our troops wonderfully cooled their ardor. 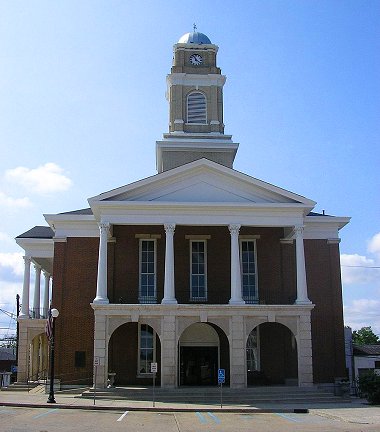 Garrard County Courthouse in Lancaster, Kentucky, as it appears today.

We are quartered here in the Court House; it is an ancient two story brick building, and looks as if a good strong wind would blow it over. However, we are very comfortable.

Lancaster is wonderful for nothing, except it may be that it has several good looking girls, which in this part of the Western hemisphere is something. It is about the size of Granville, and is built much after the style of Newark, having its square with the Court House in the center, which is enclosed by an iron fence, or rather was before it was broke down.

Nine secesh who we have captured here have just been sent to camp under a guard, where they will have their trial, and it is to be hoped that they will not let them off by their simply taking the oath, for they mind it no more than I do telling a white lie.

Capt. Bowing started for Somerset with his company about an hour ago, for the purpose of guarding some government property, so that there are now but two companies left here.

P.S. Since writing the above a message was received from Camp Dick, upon receipt of which, a man was despatched to tell Captain Bowing to return with his company. We all go back to Camp Dick to-morrow. There is a vague rumor that Zollicoffer has outflanked us, but nothing certain is known. Respectfully, J.A.