] of Stanwardine in the Fields was apprenticed to a draper in the nearby town of Shrewsbury. There, as an aspiring merchant, he would establish connections with members of the Kynaston family. Some would became business partners or associates – and one would become a partner in marriage. This is the story of the early part of John’s life, and how it was influenced by his Kynaston kin.

The record of John’s apprenticeship gives his age as 16, and states that his father was Richard, a yeoman – deceased. Most likely he was the “John the sonne of Richarde Atcherley of Stanwardine yoman” who was baptised on “the xvjth daye of May” (May 16th) 1613 at Baschurch All Saints. This suggests either that John’s parents did not have him baptised until he was about two years old, or that his mother – deliberately or otherwise – misled the Shrewsbury Drapers Company when she arranged his apprenticeship.

No record of Ellenor’s marriage to Richard Atcherley has yet materialised, so her maiden surname is a mystery – as is her eventual fate, since I have also failed to locate a record of her burial (or of any second marriage). Information on Richard and Ellenor’s daughters Jane and Anne after their baptisms is also lacking. Fortunately Roger Atcherley left more of a paper trail, one surpassed only by that of John. 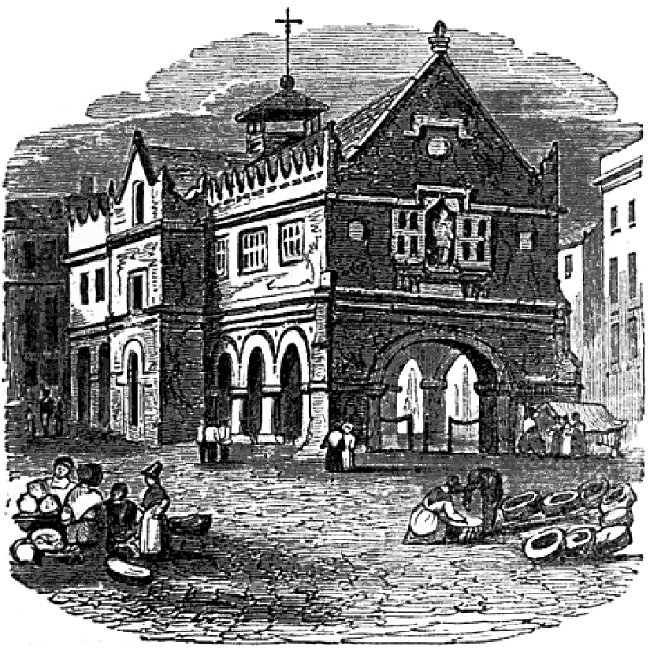 John Atcherley would have completed his seven year apprenticeship to one of the members of the Shrewsbury Drapers Company in 1634. He was then free to pursue his own career as a dealer in woollen cloth, a business which had brought great prosperity to the drapers of Shrewsbury. These merchants, or staplers, were essentially middle-men, their Company being “an outpost of the London Company” and sharing with that company the same coat of arms. They bought great quantities of cloth (known as cottons, friezes or flannel) from producers in North and mid-Wales before passing it on to local shearmen to be finished. The drapers then traded the cloth from the upper room of Shrewsbury’s Market Hall, in the Square (pictured above), and conveyed it via weekly packhorse trains to Blackwell Hall in London, for sale to London merchants who would export it to Europe and beyond.

]. One author has described him as “covetous”, “unusually acquisitive” and possessing “a certain predatory unscrupulousness”. A Merchant of the Staple, he was admitted to the Shrewsbury Drapers Company in 1593 and twice served as Bailiff of the town. His wife Judith (nee Chambre), to whom Arthur was married at Withington in 1597, bore him a dozen children between 1598 and 1614. All but one of their offspring were baptised at the church of Shrewsbury St Mary. In 1635 the couple’s youngest daughter, named Judith [

] after her mother, became John Atcherley’s wife. She and John were married on 26 March in the church where Judith’s baptism had taken place almost 22 years earlier.

had married into a family of some distinction, with roots among the Welsh Princes and possible connections to English Royalty. (See Judith Kynaston … and connections with Royalty?) However the reputation of his new father-in-law had, a number of years before, been rather tarnished, at least in Shrewsbury. For many years the Shropshire town of Oswestry, situated some 16 miles north-west of Shrewsbury, was the official staple or market for woollen cloth. This required the drapers of Salop to make weekly journeys from their home town to Oswestry and back, a trek which was not only tiresome but also hazardous given the large amounts of money the staplers carried with them. Because of the threat from bandits, robbers and highwaymen the Drapers Company ordered, in 1583, “that no draper set out for Oswestry market on Monday before 6 o’clock, on forfeiture of 6s. 8d. and that they should wear their weapons all the way, and go in company.” In 1609 the Drapers tried to have the staple moved to Shrewsbury, but their attempt was rebuffed by the then powerful Thomas Howard, Earl of Suffolk and Lord of Oswestry, who sent a letter advising them to desist. The letter was carried to the Shrewsbury Drapers “by one of their own body,—Arthur Kynaston”.

The Shrewsbury Drapers Company, which had its headquarters at Drapers Hall (pictured above), got its own way eventually. Thomas Howard suffered a reversal of fortune in 1618 and was no longer in a position to defend the rights of the Oswestrians. In 1621 the drapers “made an order upon the books of their Company, ‘That they will not buy cloth at Oswestry, or elsewhere than in Salop.’” It is said that at this time Arthur Kynaston “betrayed the Drapers’ Company by siding with Oswestry” – he “deserted to the enemy” and became Recorder (solicitor) of the town which had been robbed of its wool market. Despite these supposedly dodgy dealings, it appears that the Kynastons remained in (or at least returned to) Shrewsbury. Arthur’s wife, Judith Kynaston, was buried there, at St Mary’s, in 1628. Arthur was interred in the same place on 19 June 1635, within three months of his daughter Judith’s marriage to John Atcherley.

In the year following his marriage, John Atcherley of Shrewsbury, son of Richard of Stanwardine, was admitted a burgess of the town. John may have attained this position by showing that he was descended from an earlier Richard Atcherley of Stanwardine in the Fields who had become a burgess in 1416, or by payment of a fee. The third way in which a person could join the ranks of the burgesses of Shrewsbury was through serving as an apprentice to one of their number  – this seems the most likely way in which John qualified.

The Shrewsbury Burgess Roll shows that John, as his father-in-law Arthur Kynaston had been before him, was a “Merchant of the Staple of Calais.” The reference to Calais, even before John’s time, was something of an anachronism. That port had been designated the “staple port” for British wool and leather exports in 1363, when it was under English control. The Merchants of the Staple had been granted exclusive rights to trade raw wool there. Following the loss of Calais to the French in 1558 the staple was moved to Bruges, and by the early 1600s the Merchant Staplers traded only in domestic markets.

John Atcherley evidently maintained connections with the Kynaston family beyond his marriage to Judith. A document held at Shropshire Archives dated 26 January 1636/7 names “Thomas Kynaston of London marchant, John Atcherley of the town of Shrewsbury gentleman and Samuell Kynaston of the town of Shrewsbury gentleman” as partners in a property deal relating to water mills situated on land in the parish of Whittington. He also bestowed some of the names borne by his Kynaston cousins upon his own children: Samuel (twice), Arthur, Abigail, and of course Judith. 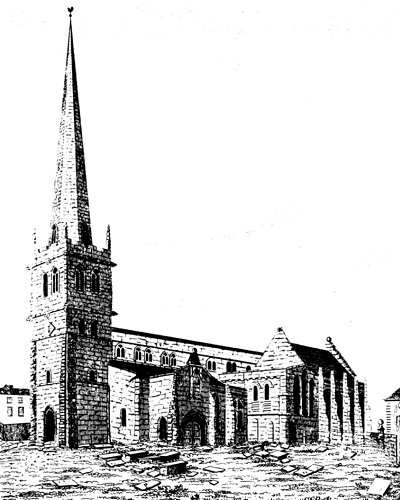 parish register of Shrewsbury St Mary records the baptisms of no less than 13 children fathered by “Mr John Acherley” during his marriage to Judith Kynaston. Whether Judith was the mother of all those children is another matter. As was often the way in those days, the mothers of children baptised at St Mary’s (the church is pictured right) were not named in the register. We cannot therefore be certain that the sons and daughters named therein were all born to the wives of the fathers listed. I believe that Judith Atcherley was the mother of most of her husband John’s children – but not all of them. When John’s son Francis was, like his father, apprenticed to a member of the Shrewsbury Drapers Company, in 1656, he was described as John’s natural son – a term which was widely used for a child born out of wedlock.

There is also more for me to tell regarding John Atcherley, for he lived through one of Shrewsbury’s darkest times, a period when neighbour was pitted against neighbour and opportunities to trade were greatly restricted. The period was 1642 to 1651: the time of the English Civil War.

> On to An Atcherley family’s English Civil War – Part 1.

Picture credits. Market Hall, Shrewsbury: from A guide, descriptive and historical, through the town of Shrewsbury, fourth edition, published 1885 and therefore out of copyright. Drapers Hall, Shrewsbury: © Copyright ‘Jaggery’, taken from Geograph and adapted, used, and made available for re-use, under a Creative Commons licence.Shrewsbury St Mary: from The History and Antiquities of Shrewsbury, 2nd edition, volume I, published 1837 and therefore out of copyright.