Sometime between April 1851 and November 1852, the family of Thomas Cureton Atcherley (1804–1874) established itself in Wolverhampton, settling a little to the west of the town centre at Chapel Ash. Not long afterwards an expanding transportation company also arrived in Wolverhampton – the Great Western Railway. In conjunction with the Oxford, Worcester and Wolverhampton Railway, the GWR opened a new station in the town in 1854. This development was an important step in the GWR’s push to extend its railway line from London into the industrial heart of the English Midlands, and onwards into the north-west. It also gave Thomas Cureton Atcherley’s son, John Roger, an opportunity of life-long employment.

] was the eighth child, and third son, of Thomas Cureton Atcherley [

] and his wife Mary, née Matthews [

]. Born at Hurst Farm, in the Shropshire parish of Westbury, on 8 August 1842 (and baptised at the parish church of St Mary on 16 September that year), John had grown up as part of a farming family. The 1851 census recorded John with his siblings and parents at Cruckfield House in the parish of Ford, near Shrewsbury – but as we have seen, the Atcherleys did not remain there for long.

] at Chapel Ash on 13 November 1852, at the age of 23, is the earliest indication I have found of the family’s move to Wolverhampton. The next indication is the inclusion of “Atcherley T. C, Chapel Ash” among the Grocers and Tea Dealers of Wolverhampton, in White’s Directory of Birmingham for 1855.

By 1861, Thomas Cureton Atcherley and his family had moved ‘down the road’ into Wolverhampton proper: on that year’s census they were enumerated at Darlington Street. Thomas was still trading as a grocer. John, meanwhile, was said to be a hardware merchant’s clerk – which is puzzling, as he had been employed by the Great Western Railway since January 1855 and continued to work for them for the rest of his life.

John Roger Atcherley’s career with the GWR can be traced through a series of entries in the company’s registers of clerks (now held by The National Archives). These show that when John started out, in the Accounts Department at Wolverhampton, his annual salary was just £10. This was doubled to £20 in July 1855, and then rose by £10 in each successive year . From July 1861, three months after the census was taken, John was earning £70 per annum.

John did not receive another pay rise until January 1864, but this was followed by an additional rise of double the usual amount in August that year, taking his annual salary to £100. By this time John was working in the Great Western Railway’s Accounts Department at Paddington, London, having commenced there in October 1863.

On the right lines: keeping track of finances

By the end of 1863 the total mileage of routes covered by the GWR’s railway lines had reached 1,106 miles (a considerable increase from 171 miles at the end of 1841). It had achieved this partly through construction of its own lines, and partly through the acquisition of other companies including the Shrewsbury and Birmingham Railway, the Shrewsbury and Chester railway (both in 1854, with 79 miles between them), the South Wales Railway (1863, 164¾ miles) and the West Midland Railway (1863, 198¾ miles).

As you can imagine, operating and expanding this railway network involved the movement of a great deal of money as well as a large amount of rolling stock. It was essential for the GWR to ‘keep track’ of its many and various financial transactions. Not only did the company need to know what was happening with its finances, so did its investors (including a number of Atcherleys such as the Misses Atcherley of Shrewsbury). Hence the need for the small army of clerks like John Roger Atcherley in the company’s accounts offices. 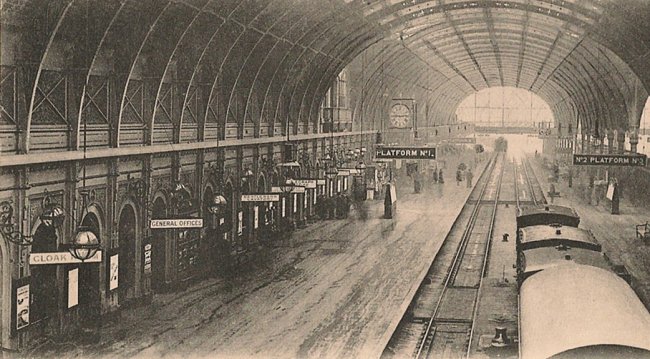 Parliament also took an interest in the affairs of railway companies (including their finances). Indeed, it was only through the passing of Acts of Parliament that these businesses could come into being. Beyond these enabling Acts however, Parliament initially did little to regulate the construction or operation of the railways. But the zeal for railway building and the financial repercussions of ‘railway mania’ were so great that they could not be ignored. Indeed, in the words of John J Glyn (in his paper The development of British Railway Accounting: 1800-1911): “Railways in the nineteenth century had a major influence in reshaping some of the legislative procedures in parliament, the development of the capital market, and the economy at large.”

Of particular relevance to the accounts departments of the GWR and other railway companies was legislation relating to the keeping and presentation of accounts of income and expenditure. Returning to Glyn’s paper:

Prior to 1868, no precise form of accounts was prescribed for railway companies, although certain requirements with reference to accounts were placed on such companies as came within the scope of the Railway Regulation Act, 1844, and the Railway Clauses Consolidation Act, 1845.

The keeping of accounts was, however, obligatory on all railway companies (in common with other companies carrying on undertakings of a public nature) under the provisions of the Companies Clauses Consolidation Act, 1845. […]

The Regulation of Railways Act, 1868, made it obligatory for all railway companies to render their accounts half-yearly in line with the forms prescribed in the first schedule of that Act.

John Roger Atcherley probably lodged or boarded at several different addresses after his transfer to Paddington. At the time of the 1871 census he was boarding at 11 St Marys Square, the home of 64-year-old widow Jane Nicholls and her unmarried daughter May. John too was single. Aged 28, he was this time correctly recorded by the enumerator as a railway accountant. Pay increases in December 1865, October 1867 and April 1869 had taken his annual salary to £130. This rose to £140 within a fortnight of the 1871 census being taken. Larger pay rises in 1872 (£15), ’74, ’75 and ’76 (£25 each time) meant that within five years John Roger Atcherley was earning £225 per annum.

With his higher salary John was now able to afford a place of his own, and the house he acquired in turn qualified him to vote in elections. The Register of Electors for the Borough of Mary-le-bone for 1876 therefore included John Atcherley of 20 Porteous Road. He was still at this address in 1881, by which time his salary had risen to £260. He had also been joined by his widowed mother Mary (age 71, an annuitant) and his unmarried sister Margaret Bell Atcherley [

] (47, a housekeeper – presumably for John). The household even included a general servant!

Balancing the books – of the Literary Society

The expertise in accountancy which he had developed through his employment with the Great Western Railway were now also being used by John for purposes outside of – but still connected to – his ‘day job’. In 1877 for example, “Mr. J. R. Atcherly” was appointed Treasurer of the Great Western Railway Literary Society. This fact I gleaned from a report in The Freemason’s Chronicle of 16 June that year, which also stated:

The Report of the Great Western Railway Literary Society, which was read at the twenty-fifth general meeting, discloses a very satisfactory state of things. Bro. Sir Daniel Gooch Bart. M.P., Provincial Grand Master Berks and Bucks, is the President of the Society, which numbers now 593 members, there having been an increase during the past year of 43 members. As many as 411 volumes have, in the same period, been added to the library for circulation, thus raising the total number from 7,354 to 7,765 volumes. 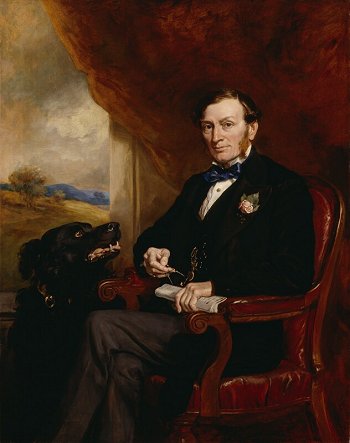 Sir Daniel Gooch – pictured right – was at that time Chairman of the GWR (a position he had held since 1865, having previously been the company’s Superintendent of Locomotive Engines from 1837 until 1864). We will meet him again later in this story; for now it is enough to say that his Chairmanship of the GWR’s Literary Society was a reflection of the interest his company took in developing such facilities for its employees. The beginnings of the society were reported on by the London Daily News of 27 May 1853 as follows:

A report, embracing a variety of interesting details respecting this newly formed institution, has just been issued by the committee. It is gratifying to find that the facts disclosed reflect no less credit on the employés of the company than on the directors, and that while the latter not only sanctioned but effectively promoted the formation of the society, the former have eagerly availed themselves of the advantages placed within their reach. The society started in March, 1852, with 113 members, and it now possesses 178. At that time the library contained 730 volumes, but it has since been gradually increased to 1,375 volumes. The funds of the society are also stated to be in a very flourishing state, and the circulation of the books has steadily increased. […]

Was John Roger Atcherley one of the members of the GWR Literary Society? I like to think he was, and that the books he borrowed from the society’s growing library provided a pleasant way for him to while away some of the leisure time available to him when he was not working on his employer’s accounts. I don’t know for sure though. I am also uncertain of how long John remained as the Literary Society’s treasurer after his election in 1877.

The society continued to thrive and grow long after the days when Sir Daniel Gooch and John Roger Atcherley were involved. Its library, originally established in rooms at Paddington Station, was moved in 1899 to new premises at 44 Eastbourne Terrace, the new accommodation and associated costs being funded by the GWR’s directors.  By 1906 (according to the Exeter and Plymouth Gazette of 15 February that year) it had a membership of 728 and “a library of upwards of 10,000 works” which had “proved a considerable attraction among employes of the Company.” The centenary of the GWR Literary Society was celebrated with a luncheon held at Paddington’s Great Western Royal Hotel, with the institution’s President in the chair.

The Whitland and Cardigan Railway – full steam ahead?

In 1881 John became the auditor of the Whitland and Cardigan Railway Company (WCR). He was listed as such (being described as “J. R. Atcherley, Great Western Railway, Paddington, W.”) in that year’s edition of Bradshaw’s Railway Manual, Shareholders’ Guide, and Official Directory. The WCR had been struggling financially, so assistance from the GWR was broadly welcomed by its directors and shareholders.

Sadly, after assisting the WCR John Roger Atcherley would face difficulties of his own. The saga of the Whitland and Cardigan Railway, and the conclusion of John’s own tale, follows in Part 2.