The preface of Bradshaw’s Railway Manual of 1881 stated that there were then “upwards of 350 independent Railway undertakings in the United Kingdom”, while the General Index listed 342 UK railway companies from the Abbotsbury to the Yarmouth Union. Many of these firms were small affairs, with very limited lengths of ‘railroad’ to their names. The Whitland and Cardigan Railway Company (WCR), of which John Roger Atcherley [

] had become auditor, was a prime example. 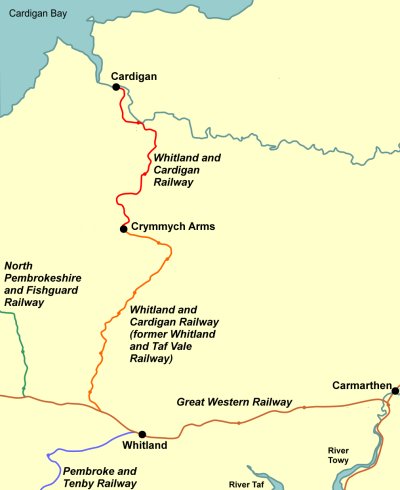 The WCR was incorporated – as the Whitland and Taf Vale Railway Company – by an Act of Parliament dated 12 July 1869, “to construct a railway from the South Wales Section of the Great Western, near Whitland, to Crymmych Arms, Pembrokeshire, for Cardigan and Newport.” The length of this railway was to be 14½ miles, with the Act authorising capital of £37,000 (in 10 shilling shares) and £12,300 on loan. A further Act in 1874 authorised additional capital of £10,000 and an extra £3,300 on loan – along with provision of “a narrow gauge communication to Whitland” and other facilities by the Great Western Railway.

The reports of the WTVR’s directors and engineer presented at the company’s half-yearly meeting at the end of August 1875 painted an encouraging picture. Minerals and goods traffic had continued, and the line had opened to passenger traffic on 12 July. Three days later, a railway inspector from the Board of Trade had given the railway a clean bill of health. Receipts were up £213 compared with the same 5 week period in the previous year. In communicating these facts to its readers, the South Wales Daily News concluded by saying that “the whole affairs of the company appeared to be satisfactory”, and that a “vote of thanks to the chairman terminated proceedings.”

In 1876, a public meeting was held at Cardigan for the purpose of bringing a railway line to the town. Two of the three options under consideration involved WTVR extending its line to meet this objective. By November that year the company had submitted a Bill to be introduced during the next session of Parliament, to enable them to do exactly that. In its account of the Bill’s progress published on 23 March 1877, the Carmarthen Weekly Reporter made this appeal:

Encouraged, as they should be, by the success of the bill in the House of Commons, should not the inhabitants of Cardigan and vicinity adopt every effort to urge the movement to arrive at a successful issue by which the town of Cardigan would be connected with other county towns by way of traffic, and not as hitherto “50 miles from everywhere”.

The Bill was unopposed and received Royal assent on 2 August 1877. This news was shared by the Board of Directors at the subsequent half-yearly meeting. Its report concluded:

Provision has been made in the Act empowering the Great Western Railway Company to subscribe £10,000 to the extension, and the shareholders of that company have authorised their directors to do so. The extension has rendered a change in the name of your company desirable, and the joint undertaking will henceforth be known as the Whitland and Cardigan Railway.

Going off the rails

The directors’ report also included some less welcome news: there had been only a small increase in traffic in the previous 6 months. This small increase became a decrease in traffic as time went on, reducing the profitability of the line. Possibly this discouraged some would-be investors – attracting sufficient shareholders was certainly a problem for the company. No dividends were paid on shares after the company’s change of name in 1877. The half-yearly meetings such as the one in 1875 mentioned above when all seemed well, soon became a distant memory. 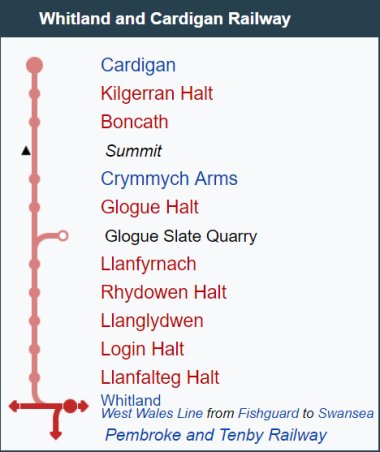 At their meeting in February 1881, the directors and shareholders found themselves discussing the terms of a “proposed working arrangement with the G.W.R.” and two Bills passing through Parliament which would enable this. At that meeting, the South Wales Daily News of 19 February 1881 reported, a “lengthy account” was given of a meeting between company representatives and Sir Daniel Gooch regarding the terms under which the GWR would provide a £14,000 loan.

There were some misgivings, but James William Bowen, QC, a director of the company and one of those who had met with Gooch, said “As far as I can see it is the Great Western Railway or death.” Ultimately “resolutions were passed approving of the Whitland and Cardigan Railway Bill, and also of those sections of the Great Western Company’s Bill” under which the GWR sought power to lend money to the WCR.

By this time John Roger Atcherley was an auditor of the WCR. I suspect that his assistance in this capacity had been offered by the Great Western Railway because of the investments they had made in the company. One week on from the aforementioned report in the South Wales Daily News, the same paper gave an account of the WCR’s half-yearly meeting. This naturally included the latest on the company’s woes, and its negotiations with Sir Daniel Gooch and other representatives of the GWR:

John Roger Atcherley was re-elected as auditor at the above meeting. Subsequent copies of Bradshaw’s Railway Manual and reports on the Whitland and Cardigan Railway’s half-yearly meetings show that he remained in that position right up to 1890 – in which year the perennially unprofitable WCR was finally taken over by the Great Western. The extension to Cardigan had opened to passenger traffic in 1886, but this had not been enough to save the Whitland and Cardigan Railway Company.

A coupling at last for John

Meanwhile, there had been developments in John’s domestic life. On 9 May 1877, at the church of St Chrysostom in Rusholme, Manchester, John Roger Atcherley, aged 44, a bachelor and an accountant of 20 Porteous Road in Paddington, London, wed Mary Carruthers Miller [

], aged 39, a spinster, of 190 Plymouth Grove, Manchester. Given the distance between them, how did John and Mary met and become ‘an item’?

Mary Carruthers Miller had begun her life in a place considerably further north than Manchester. A daughter of John Miller and Louisa, née Hetherington, Mary was born on 8 April 1842 at Annan in Dumfriesshire, Scotland, and was baptised there on 30 May that year. At the time of the 1871 census she was still living in Dumfriesshire (with her uncle John H Carruthers), but by 1881 she was residing with her widowed father and two of her sisters at 211 Plymouth Grove in Chorlton, Manchester.

], both named Mary Cureton Atcherley (see Constant companions? The Misses Mary Cureton Atcherley), had been sharing homes in Chorlton when the censuses of 1861 and 1871 were taken. (Coincidentally, their address in 1861 was 13 Plymouth Grove.) Although they had moved to Withington by 1881, this was only 3 miles away from Chorlton. My guess, therefore, is that John’s introduction to Mary Carruthers Miller came about through his sister, or aunt, or both!

With Mary, John moved to a new home at 37 Mount Park Road in Ealing – which in honour of the birthplace of so many of his ancestors he named Stanwardine. The couple were enumerated there when the 1891 census was taken, by which time John’s salary had risen to £330 per annum. In August 1892 his salary rose to £350; The Official Guide to the Great Western Railway published the following year showed the position those earnings were attached to: John was Secretary of the GWR’s Superannuation Fund. John would rise no higher within the company he served however, and the pay rise of 1892 would be his last.

End of the line 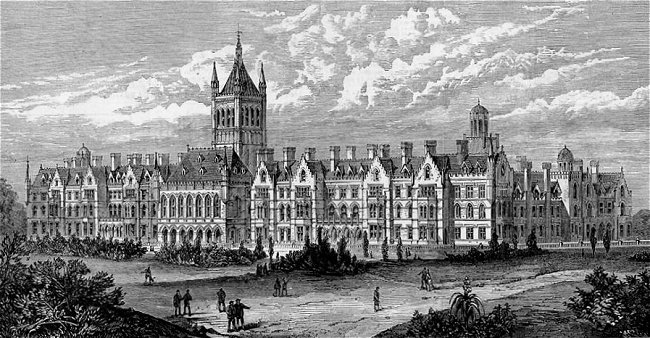 On 6 February 1894, 51-year-old John Roger Atcherley was admitted to Holloway Sanatorium (pictured above) suffering from “Resistive Stupor”. Situated in 22 acres of parkland near Virginia Water in Surrey, the sanatorium had opened in 1885. Thomas Holloway, the ‘quack medicine’ purveyor turned philanthropist whose gave his name and money to the institute had set out to establish a Sanatorium for the mentally sick of the middle classes “the professional breadwinner whose income ceases when he is unable to work”. It was just the place for John, who was too well off for treatment in a pauper asylum but not rich enough to be able to afford a private establishment.

At the time of his admission John’s bodily condition was described as “Fair”, but mentally he had apparently been unwell for a month. The cause of his condition was recorded as “domestic trouble”. Quite what was going on at home is impossible for us to know, but John’s reaction to it was a condition which has been described as follows:

Resistive stupor. — In this condition, as soon as any impulse to act arises, an absolutely opposite and counter impulse also arises. The result of this is a condition of rigidity and tension, the amount of tension varying with the intensity of the counter impulse. This tension is expressed by two symptoms, termed negativism and automatism. Negativism is shown when the patient absolutely refuses to speak, strenuously resists all movements, such as dressing and undressing, walking, and feeding. […] Automatism is found in the less severe form of resistive stupor. The tension results in jerky, stiff automatic action like that of a “wax- work”; the tone of voice is monotonous, speech […] not infrequently limited to a reiteration of the same word or sentence. Peculiar attitudes may be assumed, and peculiar automatic movements constantly made, such as the touching of some particular spot or piece of furniture.

Poor John. He was discharged from the sanatorium on 4 March 1894, having been “Relieved” – but he had not recovered. He died at home three days later on 7 March, the cause of his death being certified as “General Paralysis of the Insane 4 months” and “Asthma”. His death was registered by his sister-in-law Isabella Hetherington Miller, who had been present when John died. The address she gave showed that she had been living with John and Mary.

“J. R. Atcherley” of Ealing was buried at Perivale St Mary the Virgin on 12 March 1894. Probate was granted to his widow Mary on the 28th of that month, John’s effects being valued at £1872 2s (but later resworn as £1904 17s). Mary Carruthers Atcherley continued to reside at Stanwardine, 37 Mount Park Road, with her sister Isabella, until her own death on 2 August 1917 – leaving effects valued at £4996 19s 2d and bringing this account of her accountant husband, John Roger Atcherley, to a close.