Not for the first time – and hopefully not for the last – eBay has given me the opportunity to make an amazing addition to my ‘Atcherley archive’. Previous purchases have included press photos of Richard Atcherley and his father Llewellyn, from the 1930s and 1920s respectively, and a ‘List of Fixtures etc at Marton Hall’ from 1896. Two receipts in respect of Henry Oliver Atcherley’s schooling, dating back to 1863 (see Henry Atcherley’s school days), were the oldest items in my collection – until now. 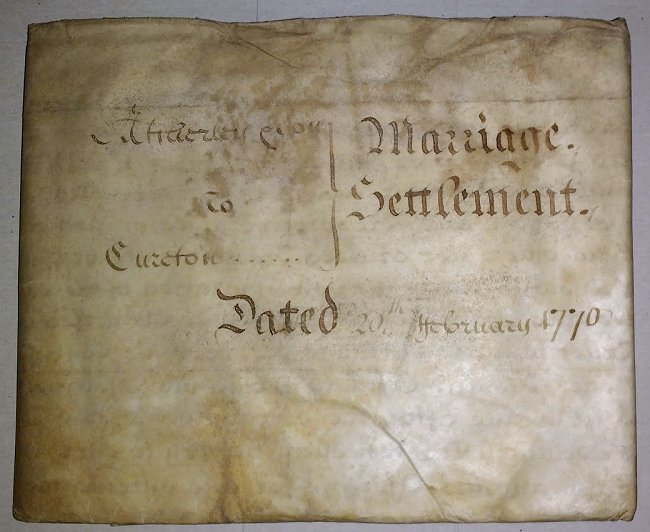 For a little over a hundred pounds, I recently acquired two documents which are nearly 250 years old. Both of them bear the signature and seal of an Atcherley who was born in the late 1600s. The documents are a marriage settlement and a related indenture, both signed and sealed in February 1770. They are the kind of thing that I am used to seeing in UK archives but, along with other indentures and deeds of a similar nature, they were in the hands of a private seller in America. I am so pleased that I have been able to bring them ‘back home’ and also share them with the world, online. 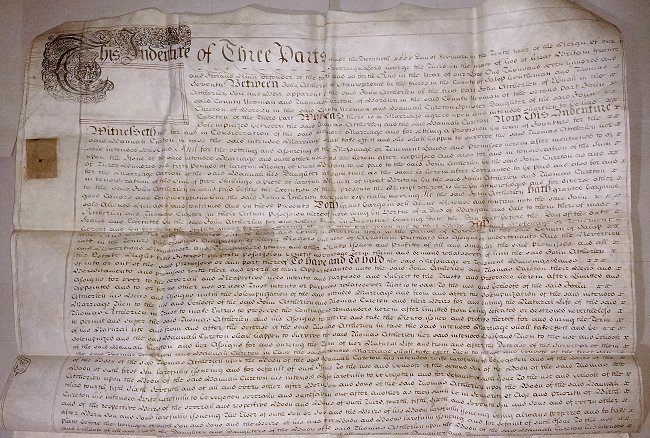 Such a settlement ensured that the dowry (often called a ‘portion’) provided by the father of the bride, would be used as a source of financial support for his daughter during her married life and, if her husband should predecease her, into her widowhood. A financial commitment was also obtained from the groom’s father, to secure the future of the married couple and their children. The Atcherley-Cureton marriage settlement was summarised thus:

] and the said Hannah Cureton [

Thomas Atcherley was his father’s only son. Of his three surviving sisters, who were all younger than he was, two (Elizabeth and Mary) had married in the early 1750s, while the other (Sarah) remained a lifelong spinster (Sarah kicks off my story of Atcherleys of Christmas Past, Part 1). Thomas’s father, John Atcherley, had tied the knot at the age of 28, but Thomas remained unwed until he was well into his forties. Thomas was the only person who could provide John with grandchildren who would perpetuate the Atcherley name. The arrangement of Thomas’s marriage to Hannah Cureton must therefore have been a relief for John.

“Hannah Daughter of John and Mary Cureton of Hordley” was baptised at Hordley St Mary on 22 March 1744/45. She would have been seen as a good match for Thomas Atcherley: her father John Cureton [

] was a yeoman, a farmer who owned his own land, as was his father before him. She was 24 years of age when she married, around 20 years younger than her husband, with a good number of child-bearing years ahead of her. But how did Thomas and Hannah see each other? Did love play any part in their union? Or was the match made for them, and entered into by them as a solemn duty? I have no evidence upon which to base answers to these questions.

Whatever their own thoughts on the matter of being united in wedlock, Thomas and Hannah were well provided for by their marriage settlement. John Cureton, father of Hannah, was to pay £350 to John Atcherley, father of Thomas. In return, John Atcherley agreed to sell his property at Morton Ucha in the parish of Oswestry to two yeomen who would hold it in trust during the lifetime of Thomas Atcherley, for the use of his wife Hannah (should she survive him), and then (after the decease of both) for the use of one or more of the couple’s children, according to the custom of primogeniture (of which more will be said shortly). 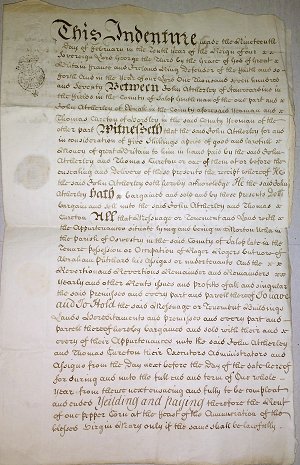 The property at Morton Ucha consisted of a house (a “Messuage or Tenement”), some land, and everything that went with them (“the Appurtenances”). The two yeomen to whom the property was sold were John Atcherley [

Although the younger John Atcherley, and Thomas Cureton, were – on paper at least – the legal owners of the Morton property, there were of course limitations on what they could do with the house and land in their possession. Although they had the use and “behoofe” (the profits or benefits) of the property while Thomas Atcherley remained alive, Thomas was nonetheless permitted “to receive and take the Rents Issues and Profitts thereof”. After his death, if Hannah survived him, she was to benefit from the property. The marriage settlement of Thomas and Hannah had much to say on who would have the “use and behoofe” of the house and land at Morton after both Thomas and Hannah were gone.

Those writers of wills and indentures who were paid by the word must have loved the custom of primogeniture, for it gave them the opportunity to write at length as they explained how it would work in practice. Put very simply, primogeniture is a system whereby real estate, titles or offices are inherited by a man’s eldest son, then by that son’s eldest son, and so on, in preference to younger sons, who in turn take priority over daughters. An additional ‘rule’ is that the offspring in question must be legitimate heirs, i.e., born in wedlock. It is possible for the heirs of younger sons to inherit if an elder son has no male offspring, or for a daughter (or daughters) to inherit if there are no sons (although in some cases if there are no sons, a brother may inherit).

Covering all eventualities, the scribe who completed the Atcherley-Cureton marriage settlement stretched this part of the agreement out into a passage of 361 words. In this particular case, in the event of there being more than one daughter who would inherit the “use and befoofe” of the Morton property, they were to do so as “Tenants in Common in Possession in a Course of Coparcenary”. In other words, they would inherit jointly.

As well as settling the property at Morton Ucha, John Atcherley agreed that if the marriage of Thomas and Hannah took place before 25 March 1770, he would give Thomas “full and Peaceable Possession” of his farm and lands, which he held and rented from Thomas Vernon Esquire, with all his “Stock of Cattle of all sorts and kind utensills of Household and Husbandry Corn Grain and Hay”.

Thomas Atcherley and Hannah Cureton married at Hordley on 22 February 1770, two days after their marriage settlement was agreed. The question of inheritance by daughters in the end was moot: over the course of the next 14 years the couple had six children – all boys. With the possible exception of their second son Thomas [

], for whom I have found no baptismal record, all their sons were baptised at Baschurch: John [

Thomas Atcherley died, aged 71, on 7 April 1796 at Stanwardine. A brief death notice in The Monthly Magazine described him as being “agent to the Earl of Exeter.” He was buried at Baschurch All Saints on 11 April. Knowing that his end was nigh, Thomas had made his will less than three weeks before his death. He had six sons to divide his estate between.

First in line was his eldest son, John: he received Thomas’s tenant right and interest in the farm at Stanwardine, together with all the farming stock, implements of husbandry, corn, grain, hay, growing crops, household goods and furniture (with some exceptions) and all the other goods and chattels belonging to the farm. Thomas Atcherley junior’s inheritance was very similar, as he was given the farm house and land which Thomas had acquired at nearby Weston Lullingfields, along with its farming stock etc. This was subject however to the payment of two legacies of £400 each to Edward and James Atcherley when they reached the age of 21. Richard and William Atcherley meanwhile were also bequeathed £400 apiece, to be paid out of Thomas’s “ready Money and Money out at Interest”.

Subject to the jointure settled on his wife Hannah under their marriage settlement, Thomas also gave his eldest son John Atcherley his “Estate at Morton Comprized in the said Settlement”, which was to be free from any other “Charge or Incumbrance”. Hannah was also allowed to take her pick of any of the household furniture at Stanwardine, while Thomas junior – the sole executor of his father’s will – was made the residual legatee.

Hannah Atcherley, née Cureton, died at Weston Lullingfields on 18 May 1810. She was buried, four days later, in the same tomb as her late husband. Although the inscription added to the tomb gave Hannah’s age as 64 she was in fact 65. Hannah had lived long enough to see her four eldest sons marry. Of those four weddings, one (that of William) served to perpetuate the link between the Atcherleys and the Curetons. The result of the ceremony in question was that Mary Cureton, Hannah’s niece, also became her daughter-in-law!

Atcherley signatures and seals on the Atcherley-Cureton marriage settlement of 1770. Note that John wrote his surname as Acherley while his son Thomas wrote his as Atcherley.

Picture credits. All photos by the author.

Images of the indenture and marriage settlement from 1770 can be viewed in the Documents album of the Atcherley.org.uk Flickr Photostream.