Lucy Atcherley was part of a family whose men took centre stage. At the time of her birth around the beginning of 1899, her father Llewellyn was a Captain in the Army Service Corps, but his military service and his services to policing would see him elevated and decorated so that by the end of 1925 he was Major-General Sir Llewellyn William Atcherley, C.M.G., C.V.O. Her younger brothers, twins Richard and David, would rise to world-wide prominence through their exploits as pilots and as commanding officers in the RAF. But while Lucy did not grab the headlines like the men in her family, she outdid her bachelor brothers in the marriage department by grabbing no less than four husbands. And she did find a way to take centre stage – by becoming an accomplished actress.

] is said to have begun when she was 18, with the Portsmouth Repertory Company. One of her earliest performances was a minor role in The Lady of Lyons, which was staged in 1919 at The Scala Theatre (situated on Charlotte Street, off Tottenham Court Road in London, but since demolished) by Frederick John “F. J.” Nettlefold. The principal roles of Claude Melnotte and Pauline Deschapelles were played by Frederick and his wife. The Nettlefolds’ performances were praised in a review in The Stage, which also described Lucy Atcherley’s assumption of her role as “commendable.” As we will see, it was not only the reviewer for The Stage who saw Lucy’s potential. 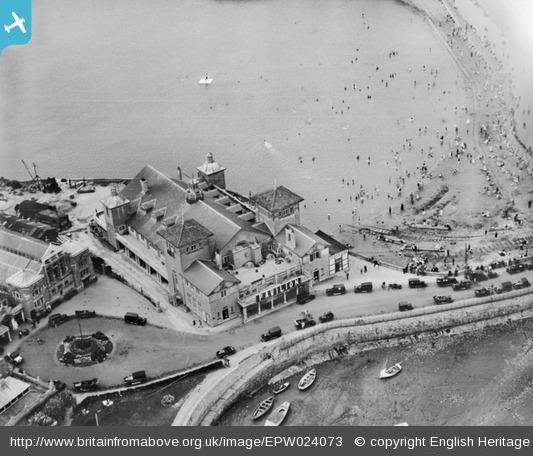 The Summer of 1920 saw Lucy tour with the Martin Harvey Vacation Company (although the legendary Martin Harvey himself, it seems, was taking a vacation of his own at this time). The company presented The Corsican Brothers at The Grand Theatre in Derby to rave reviews. High praise was given to the principal actors, and Lucy’s contribution as Madame dei Savilia dei Franchi was described as “equally valuable”. Rosemary and The Robbery of the Lyons Mail were staged at the Knightstone Pavilion in Weston-super-Mare, with the former play then performed at The Palace Pier, St Leonards on Sea. 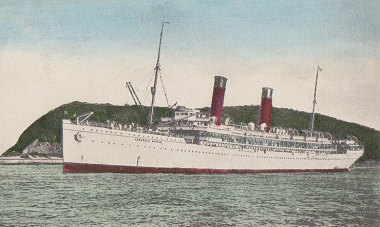 In January the following year Lucy joined another company for an extended tour of South Africa. She departed (on 21 January 1921, with fellow artistes Mr A Hawthorn, Mr L W Lane and Mr and Mrs T Maxwell) and returned (on 19 June 1922) aboard the Armadale Castle (pictured right). After her return Lucy was soon reacquainted with Frederick Nettlefold, who was by then a widower following the death of his wife Ellen in March that year. He did not remain a widower for long – within a matter of weeks Lucy Eleanor Louisa Atcherley and Frederick John Nettlefold were married. Lucy was 23 and Frederick was 54, which was three years older than Lucy’s father. 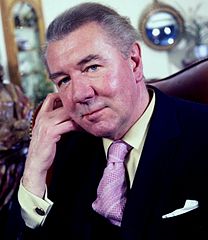 Frederick Nettlefold’s first wife, incidentally, was born Ellen Maud Pratt, and before her marriage to Frederick she had been the first wife of an actor named George Elsworthy Redgrave – better known as Roy Redgrave. She had borne Roy three children, two of whom were enumerated on the 1911 census with Ellen and Frederick. By that time Roy had married another actress, Daisy Bertha Mary Scudamore (later known as Margaret Scudamore), and with her he had fathered another child, Michael, who would become the actor, director and writer Sir Michael Redgrave, father of Vanessa, Lynn and Corin. So by her marriage to Frederick Nettlefold, Lucy Atcherley became the second wife of Michael Redgrave’s father’s first wife’s second husband!

If you are thinking that Lucy’s wedding was rather hasty, and that Frederick Nettlefold was perhaps not an ideal match for her, you would not be alone. The knot they had tied was soon undone. On 29 December 1922, Frederick departed England aboard the Malwa, bound for Bombay. Lucy set off two months later (22 February 1923) on the Guildford Castle, contracted to land at Mombasa. The family story is that Frederick went to his shooting lodge in Ceylon and asked Lucy to join him there shortly after, but during her trip Lucy hooked up with a diplomat who was en route to a posting to Baghdad and “did a runner” with him. Lucy and Frederick’s marriage ended in divorce in 1924.

I have found no records relating to Lucy for the years immediately after her divorce, until 1928. On 8 February that year, she married Frederick Layard Reeves at York. Reeves, like Lucy, was a divorcee. But while this was his second marriage, it appears that it was Lucy’s third, as she wed under the name of Lucy Hope. Presumably Hope was the name of the aforementioned diplomat, but at present I have no records to confirm this.

Frederick Reeves and Lucy set up home in Sheffield and there Lucy joined the Sheffield Repertory Company. A local paper, describing Lucy’s career, reported that she had appeared in The Second Mrs. Tanqueray and The Skin Game, had taken the lead in The Right to Strike, and had also “played in musical comedy and done film work.” This seems to answer the question of what Lucy had been doing in the years between 1924 and 1928! Her performance with the Sheffield Rep, under the name Lucie Atcherley, in Ibsen’sRosmersholm, is the last record of a stage performance I have found for her. The Stagereported that that she undertook the role of Mrs Helseth “most effectively”.

Sadly, Lucy’s marriage to Frederick Reeves was as ill-fated as her previous partnerships. On 16 April 1929 she was granted a decree nisi, with costs, on the grounds of “the adultery of her husband, Captain Frederick L. Reeves, a political agent, at an address in Sheffield.” The legal right of a women to divorce her husband purely on the grounds of his adultery was something which had come into being just six years earlier under the Matrimonial Clauses Act 1923.

Within months of the divorce, Frederick tied the knot again, with a woman named Lily Blackburn. Another four years were to pass however before Lucy remarried. Her fourth husband was another divorcee, New Zealander Alan (or Allan) James Levinge Whyte, a Captain in the Royal Engineers. With Alan, Lucy finally completed a trip to Ceylon: a 1935 passenger list for the Yorkshire shows the couple returning from that country, having spent at least a year there. 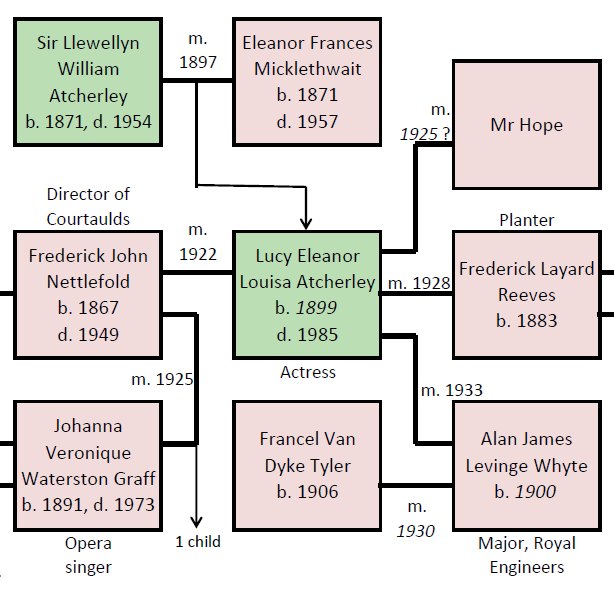 The marital connections of Lucy Atcherley – click to view in full (PDF).

In 1938 Lucy was mentioned fleetingly in newspaper reports relating to the misdeeds of her husband. In November that year Major Alan James Levinge Whyte, officer commanding the 4th fortress company, Royal Engineers, stationed at Fort Monckton, Gosport, was found guilty at a court martial of fraudulently misapplying to his own use £105 of public funds. He was sentenced, in December, to two years’ imprisonment (one year of which was remitted by the King) and dismissed from the army.

During the court martial a Major Cassels, speaking on Alan Whyte’s behalf, had stated that Whyte’s mess bills were enormous and that when in trouble he “fled to the bottle.” Cassels also said: “His wife is in a very terrible state of health, but there is a ray of hope. Plans have been made whereby Major Whyte and his wife can start again in a new sphere.” Did Lucy and her husband make that fresh start after Alan was released from prison? I like to think they did, although the only information I have found relating to either of them after this episode is that Lucy passed away in South Africa in 1985.

I am going to bring this story of Lucy’s life to a close not with her death, but with one of her brother Richard’s memories of her in her younger days, as quoted in John Pudney’s biography of the aeroplane-addicted Atcherley twins:

David and I quickly came to realise that the most effective visa for two importunate and scruffy schoolboys’ entry into the local aerodromes was to be sponsored—or better still accompanied by a really pretty girl. In this respect we came to look upon our sister in a completely new light—I mean in regards to her value to gain us the required entry. We found that she held quite exceptional influence over even our toughest obstacles.

Take your place in the spotlight, Lucy, and take a bow, for you were without doubt – to combine two of the adjectives used by your brother – a pretty exceptional member of the Atcherley family.