Baptised on 9 February 1838 at the parish church of High Ercall, John Atcherley [

] was the eldest of nine children born to Robert and Elizabeth. Under normal circumstances John would have been destined to take over the running of the farm which had been managed by his Atcherley forebears for a century. Things did not work out that way however. The financial health of John’s family, and John’s own mental health, were both to take a turn for the worst. Ahead of John lay not a settled agricultural existence but a turbulent life which would see him diagnosed a lunatic and embark on a journey half way around the world before taking a razor to his throat.

The first three census returns on which John Atcherley was recorded, in 1841, ’51 and ‘61, give no hints as to the problems which he would face in adulthood. All three show him living at home, on the 210-acre farm at Moortown, with his parents and younger siblings. He appears first as a three-year-old toddler, next as a 13-year-old scholar, and then as a 23-year-old farmer’s son who was no doubt working alongside his father Robert, who was by that time aged 55.

The farm in both 1851 and ’61 was employing a dairy maid, a housemaid / house servant, a cowman, two waggoners / carters and boy (plus, in 1851, a nurse). From this information it is obvious that the Atcherley farm was at least in part a dairy operation. Newspaper reports show that sheep, of the black-faced Shropshire Down variety, were also being raised. The Mr Atcherley mentioned in a 1853 report as the purchaser one or more rams which were selling at an average of 17 guineas each was almost certainly Robert of Moortown. So too was the Mr Atcherley named in another report the following year as one of the “first breeders and flock-masters” of black-faced sheep. And an article on the “great annual sale of Shropshire sheep” which took place in Shrewsbury 1862 notes that ewes from “Mr. Atcherley’s, Moortown” were sold for 63 shillings each. 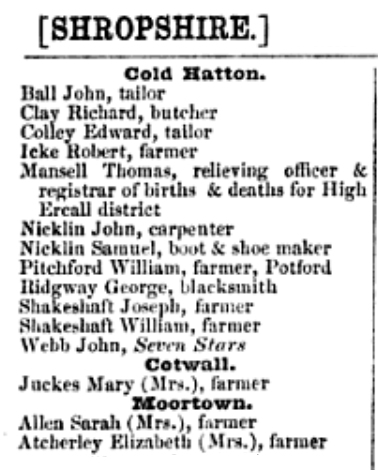 Although the farm at Moortown was referred to in 1862 as “Mr Atcherley’s”, Robert had by this time passed away (he died in September 1861). This did not however leave John in charge of the farm. The 1863 Post Office Directory of Gloucestershire, Herefordshire, Shropshire and the City of Bristol listed Mrs Elizabeth Atcherley, not John, as one of the two farmers at Moortown (see image, right), as did the 1870 Post Office Directory of Shropshire, Staffordshire, and Worcestershire. And although the 1871 census shows John, occupation “farming”, as head of the Atcherley household at Moortown (with two servants, and his sister Margaret Jemima Atcherley as housekeeper), this does not mean that he had inherited the family business. The same census recorded John’s mother Elizabeth not far from Moortown, as a visitor at the farm occupied by her daughter and son-in-law, Charlotte and John Brookes. Her occupation was given as “farmer” and she probably returned to Moortown within days (perhaps even on the day) of the census. I don’t doubt that John was doing the lion’s share of the physical work on the farm, but his mother was in charge.

The fact that the 1871 census shows only two servants at the Atcherley farm (a housemaid and a dairy maid) is perhaps the first sign of a decline in the family’s financial fortunes. Further evidence can be found in two documents held by Shropshire Archives, which also reveal a decline in John Atcherley’s personal circumstances. They form part of a bundle of “papers and correspondence relating to [the] County Lunatic Asylum”.

The first of these documents is dated 27 October 1876, and was written by the Reverend Frank Woods. Although he was then living at Oxford, he had been curate at Ercall for a short period and during time had evidently been called upon to testify that John Atcherley “was lunatic” — the term used at that time to describe the mentally ill. He confirmed that his testimony had been reasonable, based on “the evidence of my senses & that of others.” As to the question of whether or not John was also a pauper, Rev Woods asserted that this was “a matter with which I should have thought the relieving officer was directly concerned.”

The second item is another letter, penned on 3 November 1876 by James Marcy, solicitor, clerk to the Wellington (Salop) Union, and addressed to G D Courcy Peel, Clerk to the Visitors, at the Lunatic Asylum at Shrewsbury. James headed his letter “Re J. Atcherley”, and wrote:

I am directed by the Guardians to reply to your letter. From enquiries they have made in this case it appears that Atcherley has no means of his own, but is entirely dependant upon his Widowed Mother who holds a farm at the Moortown but is not in very good circumstances. There is no person legally responsible for his support under these circumstances the Guardians consider him a Pauper.

It appears that the above letters form the only surviving records relating to John Atcherley’s admission to the County Lunatic Asylum (or, to give the institution its full name, the Lunatic Asylum for the Counties of Salop and Montgomery, and for the Borough of Wenlock). Gaps in the admission and treatment records of the asylum for the period when John was taken into care there mean that it is unlikely that we will ever know for sure the nature of John’s mental disorder, the kind of treatment he received, or for how long he was detained there.

The County Lunatic Asylum, situated between Bicton Heath and Shelton on the outskirts of Shrewsbury, had opened in 1845, the year in which a law was passed compelling counties and boroughs in England and Wales to provide such establishments. However construction of this asylum had begun in 1843 under legislation dating back to 1808. One of the driving forces behind the asylum’s creation was Sir Baldwin Leighton, a humanitarian (and future Member of Parliament) who took great interest in the welfare of pauper lunatics. He spent much of August and September 1841 visiting lunatic asylums in other parts of the country to learn about their locations and the care they provided. We can but hope from the spirit in which the asylum was founded, that this institution cared for John Atcherley in an enlightened manner, at least by the standards of the time.

What is certain is that John’s condition improved, at least to the extent that he was no longer considered to be a danger to himself or others. As lunatic asylums at this time were often overcrowded, and because of the higher costs of keeping pauper lunatics in an asylum rather than the workhouse, such lunatics were often removed from the former to the latter despite the fact that they still required specialised care and treatment. It is therefore possible that John was, at least initially, taken to the Wellington Union workhouse rather than sent home to Moortown. Either way, the duration of John’s stay at the County Lunatic Asylum was less than three years. And whether he went to the workhouse, or home, or from one to the other after his release from the asylum, he was soon to depart for a new home a long, long way from his native Shropshire. On 29 October 1878 “Jno Atcherley”, aged 37, of Salop, a farm labourer and a single man, departed England aboard the Western Monarch, and arrived four months later, on 26 February 1879, at The Bluff, at the southern end of New Zealand’s south island. 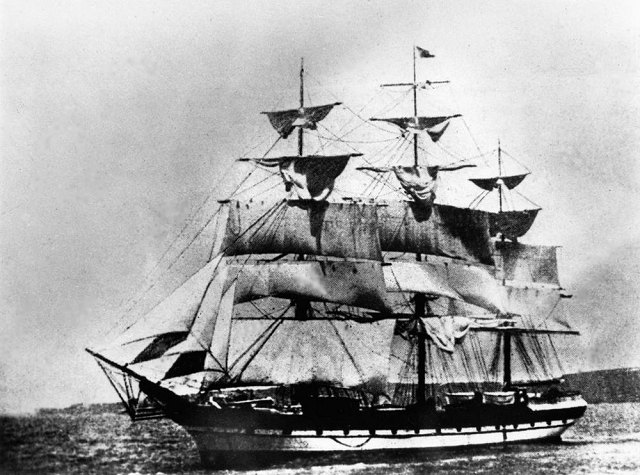 I am always curious about the reasons why our ancestors moved from one place to another. What were the factors which encouraged or compelled them to leave their homes, and what was it that drew them or forced them to settle in the places where they ended up? I have no firm answers where John Atcherley is concerned. It is difficult to know the extent to which his migration was his own choice (his family or perhaps the Wellington Union’s Board of Guardians may have been behind his relocation) or, given his state of mind, how sound his judgement was if the decision was his. But John may well have been attracted by the prospect of making a fresh start in the “Britain of the South”, a land where he might be able to establish his own farm.

If John did harbour thoughts of farming in New Zealand, his ambition was not realised. It appears that he worked variously as a labourer and as a cook, leading a quiet and uneventful life – until his inner demons returned in 1886. Towards the end of October that year, John appeared at the Resident Magistrate’s Court at Oamaru, on a charge of being a lunatic, however he was discharged. Around this time John went to nearby Redcastle, where he had previously worked as a cook, and he was given work felling gum trees. But on the morning of Sunday 31 October, according to a local newspaper:

Atcherley went to the door of a room occupied by the assistant gardener and shepherd, and after attempting to get in, called out ‘Look what I have done.’ The men looked out and found that Atcherley had cut his throat.

A doctor and the police were called immediately, and the doctor sewed up the wound which John had inflicted with a razor. Although initially it was stated that John was taken to hospital, where he lay in a critical condition, another report said that a medical examination found that John was much better. Then, some ten years after being diagnosed a lunatic in Shropshire, and nearly 12,000 miles away from that place, John Atcherley once again found himself being sent to a lunatic asylum.