< Back to Major Llewellyn Atcherley and the elusive suffragette – Part 1

“For the fourth time during the course of her vivid career of militancy Lilian Lenton, the elusive suffragette, has escaped from the police.” So began a report in the Liverpool Echo of 20 May 1914. It was true – Llewellyn Atcherley [

] had lost the elusive Lilian. I have a feeling that he had some harsh words for the Harrogate policemen, who were under his command. 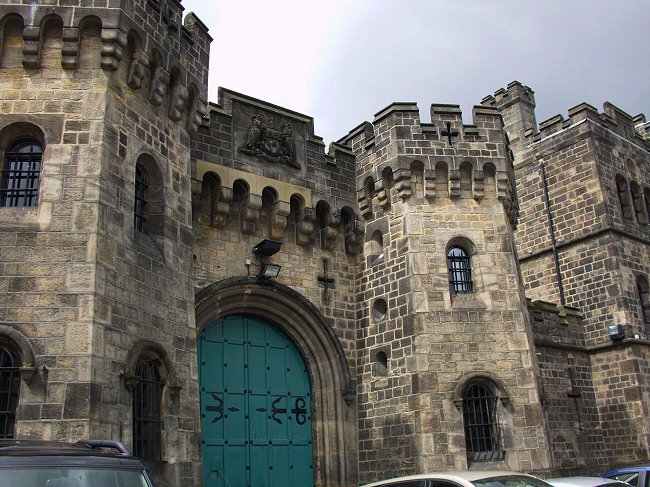 Armley Gaol (nowadays HM Prison Leeds), from where Lilian Lenton
was twice released under the ‘Cat and Mouse’ Act

In accordance with the terms of the licence under which she was released from Armley Gaol, the police entered the “boarding-house” in Harlow Moor-drive, Harrogate, and found that the woman they had gone to re-arrest was not in the house.

The knock of the superintendent was answered by a maid, who brought Mrs. Cohen to the door. She smiled affably at the officers and said, “She’s gone!” The police then went inside the house and satisfied themselves that this was indeed the case.

The maid shortly afterwards frisked down the yard, and triumphantly flourishing her hand, hurled the petty taunt at the detectives outside. “Too late!” she jeered; “too late!” There was nothing more to do but to withdraw the guard of police.

Thus the suffragettes again get the laugh, and it is safe to say that the prowess of the “elusive Lenton” will be vaunted at the meetings of the militants. Miss Grew, the W.S.P.U. organiser, said the other day that it was a “sporting and interesting situation.” Lenton was the mouse and the police the cats.

When the disappointing issue of the week’s vigil was known, a Harrogate suffragette elaborated the sporting theory. “We can beat the police every time,” she declared. “The British bobby is a phlegmatic being who is tied by red-tape to such an extent that he has neither ingenuity nor originality left. Even with Major Atcherley’s aid, you see, they could not keep the little lady in Harrogate, and if the whole Leeds detective force had been called in to assist they would not have done any better.”

So how did Lilian Lenton disappear from the Pomona Food Reform Boarding House, run by fellow suffragist Leonora Cohen (pictured left), under the noses of the waiting police?

At the time, many believed that Lilian ‘did a runner’ during an elaborate performance which took place on the evening of Saturday 16 May (the modern-day equivalent of which might be the scramble scene in the film 2Fast 2Furious). According to the Huddersfield Daily Examiner:

Saturday night’s operation were conducted with great swiftness, and it is believed that they were a complete success.

Between nine and ten o’clock some forty or fifty men and women, the women being heavily veiled and the men with coat collars turned up and hats well down to hide their faces, suddenly sprang up on both sides of the house, into which they entered. [Note: Other reports only mention veiled women.] The police immediately telephoned for fresh officers to be sent, but before this could be done the lights suddenly went out in the house and the men and women emerged from the front door.

They dashed through the iron gates and onto the road, and then spread in all directions so as to confuse the officers. Some went up the hill and others down, and others went across the moors, which are just opposite the house.

It is believed that Miss Lenton was one of the party who dashed over the moors. It would be an easy matter for her to escape in a motor-car, as the moors give access to the road on three sides. All was confusion at the time, and the detectives were powerless, as they could not tell which party to follow. The confusion was made worse by the forty or fifty people spreading out.

The Yorkshire Post also told the story of Lilian’s vanishing act, but the following words appeared in brackets at the end: “We have reason for thinking she escaped earlier. Ed. Y.P.” The editor of the Yorkshire Post was correct. The scramble at Harlow Moor Drive had been put on merely to keep the police guessing – Lilian had already made her exit. 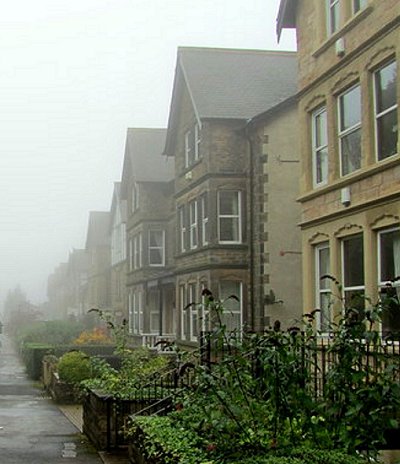 Houses on Harlow Moor Drive, on a foggy day in 2012

Accounts vary as to how and when the elusive suffragette was spirited away. Lilian herself said she went the day after she was taken to Leonora Cohen’s house. However the website How the vote was won states: “Over the next few days [after Lilian’s arrival], Leonora nursed Lilian back to health, and when she was strong enough, young Reg loaned her some of his clothes so she could disguise herself as a boy. Not wanting to take the risk of going out by the front door, even in disguise, Lilian went down to the cellar and crawled up the coal chute, and escaped through the back garden, thus eluding the police once more.”

“Miss Lenton Escapes. Police Again Outwitted by Young Suffragist”, ran the headline of a report in the Manchester Courier of 20 May 1914. The opening words of an article in the Yorkshire Evening Post the previous day were: “The comedy of the Harrogate boarding-house is over.” The bird had flown, leaving Chief Constable Llewellyn Atcherley and the policemen of Harrogate with egg all over their faces.

The opportunity to crack jokes at Llewellyn’s expense was, for some, irresistible – and it wasn’t just those in the women’s suffrage movement who joined in. Alderman Hardacre, of the West Riding County Council, made the most of an opportunity presented at a meeting of the West Riding Standing Joint Committee held at Wakefield on 17 June 1914. The Leeds Mercury’s account of the committee’s proceedings included the following:

Upon a recommendation being submitted acceding to the application of the Harrogate Town Council for the appointment of a supernumerary constable to “protect public buildings” at their cost,

Ald. Hardacre asked: Is this in consequence of the raiding of the Suffragettes. (Laughter.)

The Chief Constable (Major Atcherley): No, it is not in consequence of that.

Ald. Hardacre: Then is it to try and catch the lady who escaped? (More laughter.)

Seven weeks later, Britain was officially at war with Germany and everything changed. On 10 August 1914, the WSPU (Women’s Social and Political Union), of which Lilian Lenton was such a prominent member, declared a cessation of militancy. On the same day the Home Secretary, Reginald McKenna, announced in Parliament that he had “advised His Majesty to remit the sentence on all persons now in prison for crimes connected with the suffragette movement.”

Clarification of the nature of the amnesty for suffragettes was soon needed, following the re-arrest of a suffragette in Newcastle on the grounds that “she had no paper to produce.” A Home Office letter, stating that “the continued freedom of the Suffragist prisoners under the ‘Cat-and-Mouse’ Act, depended on the pleasure of the Home Secretary,” caused further dismay. For the WSPU there was only one way to deal with this situation – the Home Secretary had to be confronted. 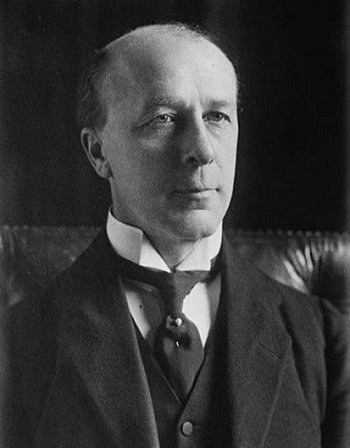 A WSPU delegation, which included Lilian Lenton, descended on the Home Office on 27 August 1914 and demanded to see Mr McKenna (pictured left). Their purpose was “to obtain from the Home Secretary for themselves and all under the ‘Cat-and-Mouse’ Act, papers granting them the unconditional release, which [was] theirs under the King’s amnesty.”

Receiving no reply to their demand, the suffragettes announced that they would wait until they got one, whereupon they were arrested and taken to Cannon Row Police Station. No charges were brought however, and it seems that the matter was later resolved, with all prisoners (including those on temporary release or awaiting trial) benefiting from the amnesty.

As the Great War raged on, more and more women – including suffragettes – became involved in war work (a fact which may have contributed to the Representation of the People Act 1918 being passed, giving the vote to about 8.4 million women over the age of 30; the vote was also extended to all men over 21). Among the suffragettes who played their part was Lilian Lenton, although it was not until 1918 that she got involved (I think it is possible that she applied to help with nursing duties but was rejected because of her reputation as one of the more militant suffragettes).

It appears that during the early years of the war, Lilian remained in London and was involved with the socialist organisation The Herald League. She was billed to appear (describing herself as “just a dancer”) at a concert arranged for 6 Feb 1915 by the League’s Bow branch, as a member of the “Merrymaids Concert Party”. In 1918 however, Lilian became an orderly with a Scottish Women’s Hospital (SWH) Unit in the Balkans. For her work she received a French Red Cross medal. Lilian continued to devote herself to humanitarian and women’s causes after the war.

The Great War also brought changes, and medals, for Major Llewellyn Atcherley (whose reputation as Chief Constable of the West Riding was secure despite the embarrassment of losing Lilian Lenton). Returning to the British Army almost as soon as Britain entered the war, Llewellyn was to take on a role which would earn him a new nickname: the “Pots and Pans General”.

> On to Llewellyn Atcherley’s World War One

(See also the references for Part 1 of this story)