“I think that my speciality was escapes. That is, escapes from the houses to which I had been taken when released under this Cat and Mouse Act. These houses were surrounded by detectives, whose job it was to prevent my getting out before the day on which the police would have the right to come and take me back to prison.” — Lilian Lenton, speaking on BBC Radio, 1960. 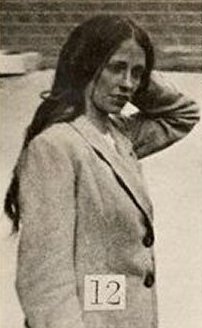 I’ll be upfront and confess right now that Llewellyn Atcherley [

] features only fleetingly in this story. He had a part to play however, and I think the tale of one of his last major cases (as Chief Constable of the West Riding) before the Great War broke out, is one worth telling. The central character, the ‘elusive suffragette’ as she was known, was Lilian Lenton (pictured left, around 1912).

Born on 5 January 1891 in Leicester, Lilian was the daughter of carpenter and joiner Isaac Lenton and his wife Mahalah. According to Jill Liddington, writing in Rebel Girls: “The eldest of at least five children, she grew up amid Leicester’s shoemakers and hosiery workers. Lilian was slim, lithe and striking; and, with what must have needed considerable determination for a working-class girl, she avoided dressmaking or shop-work. Instead she trained for a career as a dancer.”

During the Winter of 1911-12, the direction of Lilian’s life was changed when she heard Emeline Pankhurst speak at a meeting of the Women’s Social and Political Union (WSPU). Lilian later said: “I made my mind up that night that as soon as I was twenty-one and my own boss and that I’d got through these examinations I would volunteer.” Within three months of her 21st birthday, Lilian was taking part in a WSPU window-smashing raid, for which she was arrested and later sentenced to two months imprisonment.

Thanks to her exploits, which escalated from window-smashing to burning empty buildings, Lilian quickly made a name for herself. In fact, she made several names for herself. A Home Office list of suffragettes who had been arrested recorded Lilian as “Lenton Lilian or Ida Inkley or Unknown Woman 249 or May Dennis”. It also listed five occasions on which she had been arrested: 5 March 1912 (at Marlborough Street, as Inkley), 20 February 1913 (at Richmond, as Lenton), 10 June 1913 (at Doncaster, as Dennis), 9 October 1913 (at Richmond, as Lenton), and finally 22 December 1913 (at Cheltenham, as Unknown). As we shall see, there is one arrest missing from this list. 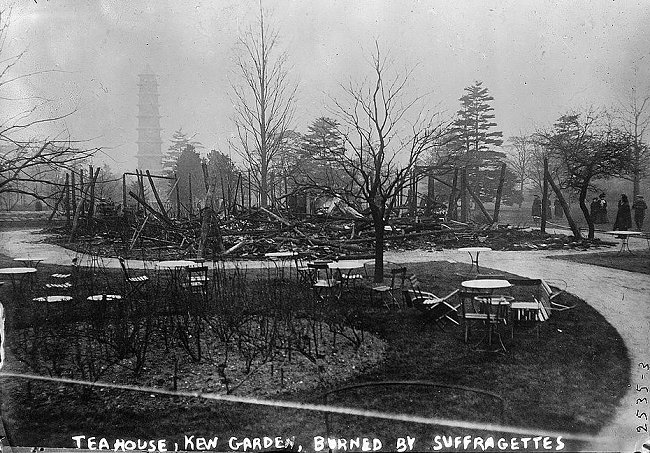 Following her arrest on 20 February 1913, for burning down the tea pavilion at Kew Gardens (the aftermath is pictured above), Lilian was remanded in custody and sent to Holloway prison. In protest at being denied bail, Lilian went on hunger strike. The last thing the authorities wanted was to be blamed for the death of a suffragette: force feeding was the response to those refusing food when in prison. The first attempt to force prison gruel into Lilian Lenton however was very nearly a disaster – the pipe was in error pushed down into her trachea and the food went into her left lung. The outcome was septic pneumonia for Lilian, and panic for the prison governor and the Home Secretary.

There was little option but to release Lilian, so that she could recover. Having done so, she disappeared from the house to which she had been taken – her first escape, and not her last. 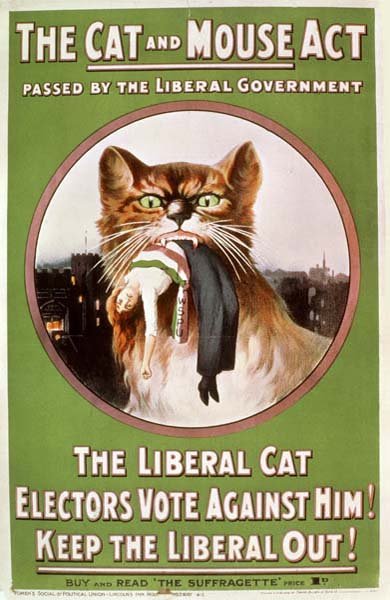 The risks involved in force-feeding uncooperative suffragettes in prison, as illustrated by the close call with Lilian Lenton, led to the passing later in 1913 of the Prisoners (Temporary Discharge for Ill-Health) Act. This measure permitted the temporary release of a prisoner whose life was endangered by hunger striking, only for them to be returned to prison once the danger was over. The police would keep a close watch on the released prisoner’s place of residence during their recuperation, in case an attempt was made to ‘disappear’. The legislation became known as the Cat and Mouse Act, and Lilian Lenton went on to become a mouse who made a habit of escaping from the waiting, blue-uniformed cats.

Lilian’s most celebrated escape was undoubtedly that which followed her release, under the ‘Cat and Mouse Act,’ on 17 June 1913. The Nottingham Evening Post of 21 June 1913 reported:

It was a bold plan which enabled Miss Lenton, the suffragist, to escape from the Leeds police […]. When she was liberated from Armley Gaol on licence on Tuesday morning, she was driven to a private house and at once put to bed, as she was extremely weak, after a fast of nearly nine days. A number of detectives surrounded the house.

In a few hours a grocer’s van drove up to the back door, and the call of “groceries” having been shouted, the van “boy,” who really was a young woman, got down from the van and carried a basket into the house. Soon afterwards the “boy” returned to the van, which was then driven off. But Miss Lenton was the “boy,” and sitting in [the] front of the van she safely passed the detectives. 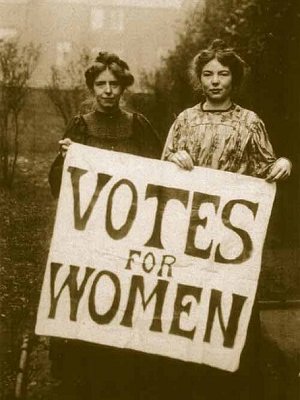 As we have seen, Lilian was eventually rearrested (or, as the Manchester Courier put it, “Brought to Bay at Last”) in October 1913. Released once more on licence, Lilian naturally vanished again. But not for long. The police caught up with the elusive suffragette in December. You can guess what happened next.

Lilian remained at liberty for rather longer this time, but was eventually recognised and arrested in Birkenhead on 4 May 1914. She was taken to Leeds to face trial for an alleged offence committed at Doncaster. Disorderly scenes at Leeds Assizes on 8 May were summed up by the Sheffield Evening Telegraph with the following headlines:

WORDY WOMAN.
Lilian Lenton Gets Twelve Months at Assizes.
TALKED ALL THE TIME.

Lilian was back inside, but prison food was off the menu. She was released on licence on 12 May – and found herself under the watchful eyes of Llewellyn Atcherley’s West Riding Police. The Yorkshire Evening Post of 15 May 1914 takes up the story:

WILL LILIAN LENTON ESCAPE?
POLICE WATCHERS USE MOTOR-CAR LAMPS.
COMING AND GOING OF THE SISTERHOOD.
MAJOR ATCHERLEY’S INTEREST IN THE CASE.

There is a sporting interest Miss Lilian Lenton’a visit to Harrogate from Armley Gaol. When she was removed there in a taxi-cab, we chronicled the fact that in a Leeds club the betting was evens that the Suffragette got away from police supervision in a week if she stayed in Leeds, and ten to 1 on her getting away if she were located in Harrogate.

It is said that this bet has nettled the Harrogate police, and they are determined that so long as they are charged with the watching of her the little Suffragette shall not escape. But there is more than that behind the extraordinarily close watch set on the Pomona Food Reform Boarding-house in Harlow Moor Drive.

The Government would like to keep a hand on Miss Lenton. She is one of the very few who have defied the Cat and Mouse Act, and only this resourceful girl and her friends know what incendiarism she has been responsible for while at liberty since her arrest at Doncaster, and her subsequent release on licence some months ago. Major Atcherley, the stalwart Chief Constable of the West Riding, the very last man who likes to be beaten at anything he takes a hand in, has been to Harrogate to see the arrangements for watching the house.

Acetylene motor-car lamps are trained on the house back and front during the hours of darkness, and four police-officers are engaged day and night scrutinising everybody who leaves the house. A motor-car is at call ready to follow any vehicle that may be employed by Miss Lenton’s friends, and at first blush it looks like the Leeds better losing his wager.

IS THE BIRD FLOWN?

But opinion at Harrogate does not wholly favour the idea that the bet will be lost. It is assumed that Miss Lenton is still in the house. One of our representatives, writing from Harrogate this afternoon, says the police are confident that the “bird is still in the cage.”

It would be an unpleasant shock to them to learn that the cage is already empty, and our representative, while without definite information, thinks this is within the bounds of possibility.

As has been stated previously, the house has been visited by numerous females, from old ladies with white hair, dressed soberly in black and bonnets, to fair young damsels dressed in the height of fashion. Everyone of these persons has been most closely scrutinised. Nevertheless one important fact has to be taken into account, and reporter learned of it to-day. It is this: Not a single Harrogate police-officer saw Lilian Lenton enter the house when she arrived from Armley. True, they are supplied with photographs, but looking at a photograph and looking at the original are two vastly different things—especially if the original be cleverly disguised, as it is within the capacity of Lilian Lenton to disguise herself.

As a matter of fact, when she arrived at Pomona House, followed by two Leeds detective officers, there [were] no Harrogate officers to await her. The young lady quickly dismounted from the cab, and just as quickly one of the Leeds officers ran round to the back door to see that Miss Lenton did not walk in one door and out of the other. It is safe to say that she did not do so, nevertheless, none of the Harrogate officers now watching have seen Miss Lenton in the flesh.

Who would win the battle of wits between Lilian and Llewellyn?

> On to Major Llewellyn Atcherley and the elusive suffragette – Part 2