< Back to Mary Atcherley, née Rennell: Putting the geographer’s daughter on the map

], than I have answers. What education did she receive, and where did she receive it? When did she come to England, her father’s native land, from British India, the place of her own – and her mother’s – nativity? How was she regarded, and treated, by her father, by her stepmother, and by others both in India and in England? These are just some of the questions relating primarily to Mary’s early life – they are followed by others about the circumstances in which she married the Rev Roger Atcherley, and yet more regarding the lives that she and Roger led beyond that event.

One of the few things we can be reasonably certain about is that Mary was Eurasian (or Anglo-Indian): the daughter of an English man – James Rennell – and an Indian woman (whose identity is sadly unknown to me). Mary’s mixed parentage would presumably have had some impact on her experiences as a child and as an adult, but how to quantify that impact? With little information available specifically concerning Mary herself, all I can do is speculate. Thankfully there are sources relating to other Eurasian offspring of Britons in India, contemporaries of Mary’s, which provide some substance for my speculation.

Two sources which I have found particularly helpful in my quest to find out more about Eurasian children and their parents in the late 1700s and early 1800s are Poor Relations by Christopher Hawes and Family Secrets by Deborah Cohen. Both authors have made use of surviving family letters, wills and other materials to pull together the stories of British families with Eurasian children, Hawes concentrating on their lives in India, and Cohen following the fortunes of those who came to Britain. I shall credit both Hawes and Cohen frequently in the paragraphs which follow. 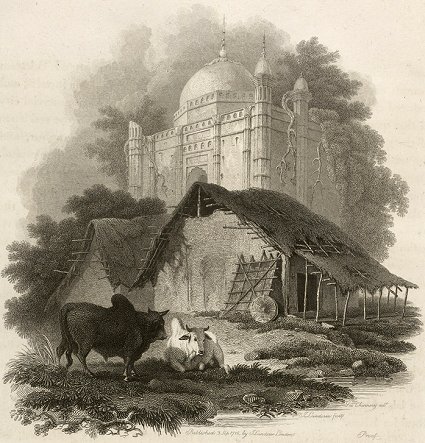 As we have already seen (in the first part of Mary’s story), it was common for British and other European men in India to take native women as companions and to have children with them. Far away from their home countries, these men publicly recognised their Eurasian progeny and for the most part – as was the case with Mary Rennell and her older sister – had them baptised as Christians. To give some idea of the extent of this practice around the time that Mary was born, “Over half (54%) of the children baptised at St. John’s, Calcutta between 1767 and 1782 were Eurasian and illegitimate” (Hawes).

Of course, in comparison with the number of men in British India, women from home were in very short supply. Of those who undertook the arduous voyage to the subcontinent, not all were considered marriage material. Some were seen as ‘adventuresses’ seeking to improve their fortunes, others were regarded (rightly or wrongly) as prostitutes; either way they brought no marriage portion with them. At the other end of the social scale, ladies of true gentility were seen by the less wealthy British men in India as being too costly for them to support. James Rennell himself, writing home in 1770, asserted:

To tell you the truth a Man with small Prospects ought not to marry in this country as all the Ladies esteem themselves on an equal footing and consequently often endeavour to outshine one another in Appearance, the consequences often fall heavy on the Husband who pays for the ornaments tho’ he does not wear them.

James changed his mind about marriage to an English Lady when he met “sweet, sensible, unaffected” Jane Thackeray. How might Jane have viewed James though? He did after all have at least one illegitimate, Eurasian child (two if Mary’s sister Elizabeth had survived). This does not seem to have detracted from James’s eligibility in Jane’s eyes, bearing out Hawes’s statement that “it was no bar to a later marriage to have lived with and had children by an Indian companion.”

How far did Jane’s sympathies go with respect to James’s offspring? To quote again from Hawes, “it was not unknown for a newly married British wife to take on the care of her husband’s Eurasian children.” Was Jane one of those more tolerant wives? I have a feeling that she was. Conflict between the couple over James’s Eurasian progeny would, I think, have soured their relationship, but in letters home James professed himself to be very happy with his wife.

As the young Mary Rennell grew older, the question of her education would have arisen. The British fathers of Eurasian daughters who could afford to do so, sent their girls to Britain at an early age for this purpose, or “they sent [them] to the ladies’ seminaries in the Presidency towns and to England to be ‘finished’” (Hawes). James Rennell could certainly afford a proper education for his daughter, as he was earning £1,000 a year even before her birth!

Mary would have been about 7 years old when James and Jane Rennell left India to return to England in 1777 – had she already been sent there, to be educated, by that time? Or did she accompany her father and stepmother? Either way, Mary and her Indian mother would have experienced the wrench of parting company, never to see each other again. 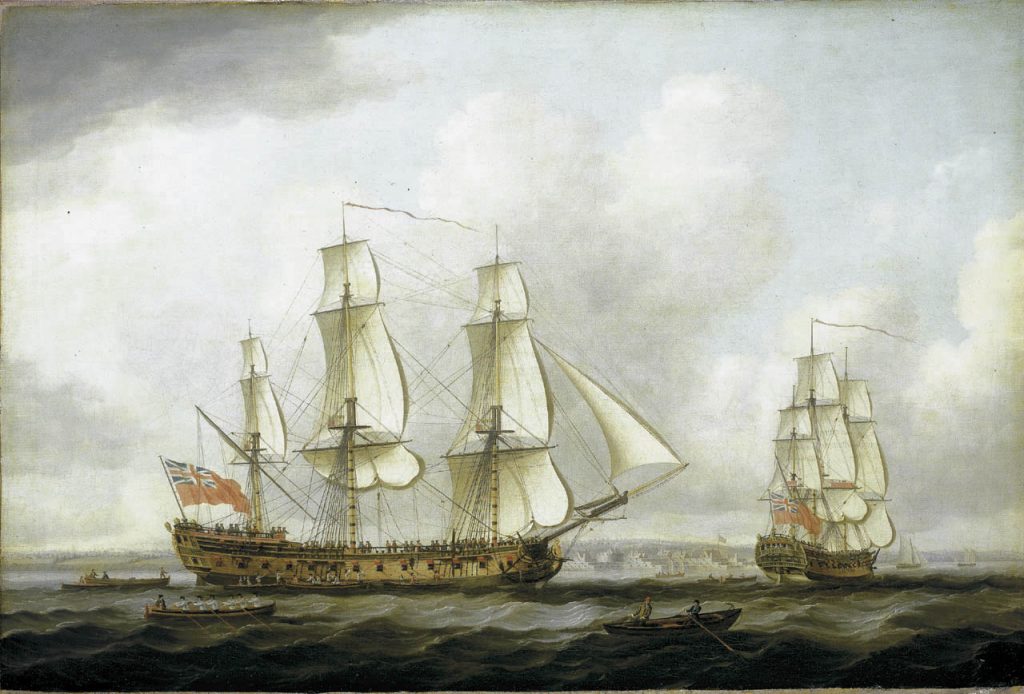 With or without her father and stepmother, Mary came to England – most likely on an East Indiaman vessel of the East India Company (like the Princess Royal in the painting above). On the face of it, her prospects were good – I am fairly sure that within the following extract from Poor Relations, there are elements which applied in Mary’s case:

Many of the Eurasian boys and girls born to British military officers serving in India in the late eighteenth and early nineteenth century had some start in life. Upper class British fathers did all within their means to maintain the social status of their children as best they could, either sending them back to Britain, contributing to orphanage systems in India, seeking employment for the boys and suitable marriages for the girls. ‘Class’ counted in these children’s favour, as it did against the military rank and file.

In practice, the wealth and status of the British fathers who sent or brought their Eurasian children home was no guarantee of happiness in the ‘mother country’ at that time. Indeed, Mary came to these shores at the beginning of a period during which British attitudes towards cohabitation in the colonies, and the illegitimate children resulting from it, became increasingly harsh. This seems to have been part of a wider change in the moral outlook of British society.

Writing in The Richest East India Merchant, Anthony Webster noted that “at the end of the eighteenth century, the rise of evangelical Christianity in Britain began to influence the attitudes and ideas of a new generation of East India Company leaders, not least Charles Grant, who, as a director and very influential chairman from the 1790s, argued for extensive missionary work to convert the ‘depraved’ Indians to the true word.” ‘Civilised’ Britons, both in India and at home, were collectively casting a far more critical eye upon Indian ‘heathens’, those who consorted with them, and the ever-growing Eurasian population.

In India it had been well-nigh impossible – and for the most part unnecessary – to keep secret the existence of Indian mistresses and Eurasian children. Back in Britain however, secrecy and subterfuge became essential for many. In Family Secrets, Deborah Cohen relates the tale of Robert Bruce and his two Eurasian daughters. In the case of his first, who died before her father could send her to his native Scotland to be educated, Robert received letters from his brother back home (in the early 1780s) protesting against his plans. So when Robert returned home in 1786 with his second daughter she was introduced as Margaret Stewart, the child of an army friend in India. He kept her real identity secret from his family, friends, and even from Margaret herself.

“Whatever tolerance Edinburgh had once extended to Eurasians, prejudice in the late eighteenth century was on the rise,” wrote Cohen. Increasing intolerance was not confined to Edinburgh. Cohen states: “Even those fathers who proudly claimed their mixed-race children in India nevertheless found Britain more inhospitable than they had imagined, the lives they had once led abroad difficult to fathom and even more difficult to defend. Whatever ambivalence they felt about their Eurasian progeny was magnified.”

Robert Bruce eventually confessed all to his brother, sister and widowed mother in Edinburgh, who had shown great affection for the little girl who they previously thought of as his ward. When Robert’s mother died in 1794, her deathbed wish with concerning her granddaughter was “be kind to her when I am gone”. Margaret was then cared for in Robert’s absences (he eventually returned to India) by her aunt and uncle, who did their utmost to guard her secret. “It helped,” observed Cohen, that Margaret was “a vivacious and quick-witted child […]. And then there was the fact that she looked white.” 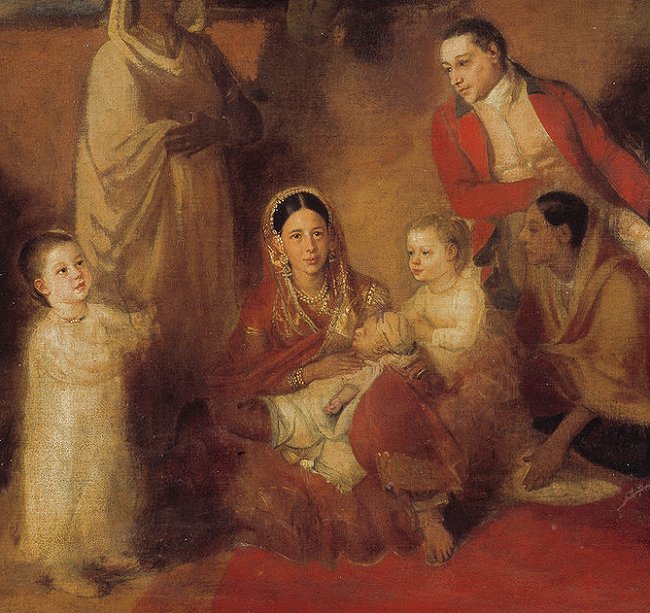 My guess is that Mary Rennell, like Margaret Stewart/Bruce (and the Eurasian children of Major William Palmer, shown with their parents in the picture above), also “looked white”, and that this helped her father to conceal her true origins. I have already mentioned (in the first part of her story) that Mary’s age, as given when she died, indicated that she was born around 1775. This falls neatly between the births of James and Jane Rennell’s two daughters in 1773 and 1777. Perhaps, once she was of marriageable age, it suited the Rennells to pass Mary off as being younger than she really was, so that it would seem that she was a legitimate child of James and Jane.

The fate of many Eurasian daughters born in India was to remain, or go back there, and marry British men of broadly equivalent rank to their fathers. This was not of course what happened to Mary Rennell, who remained in England and wed the Rev Roger Atcherley [

]. Quite how this union came about is something I would dearly love to know! I think it likely however that it was welcomed (if not arranged) by James Rennell. My belief is that James wanted the best for his daughter, and that he did not wish for either of them to suffer the consequences of her mixed-race background becoming widely known (or known at all). Mary’s marriage, to a respectable clergyman who would take her off to rural parts of the West Midlands and beyond, probably suited all concerned.

The marriage of Roger Atcherley to Mary Rennell, by licence, took place at St Andrew Holborn, Middlesex, on 1 December 1799. The record of this event in the marriage register, signed by both James and Mary, states: “The Reverend Roger Atcherley of the Parish of Saint Andrew Holborn in the County of Middlesex Clerk a Bachelor, and Mary Rennell of the Parish of Harrow on the Hill in the same County Spinster”. Mary was still the daughter of an eminent geographer, but now she was also the wife of a minister of religion, with a family life of her own ahead of her. She was well and truly a part of genteel English society.

> On to Mary Atcherley, née Rennell: Wife, mother, and widow