“DEATHS. […] At Bridgnorth, in her 67th year, Mrs. Atcherley, widow of the Rev. Roger Atcherley, Vicar of Much-Wenlock, and daughter of the late highly distinguished geographer, Major Rennell.” – The Gentleman’s Magazine, April 1842. 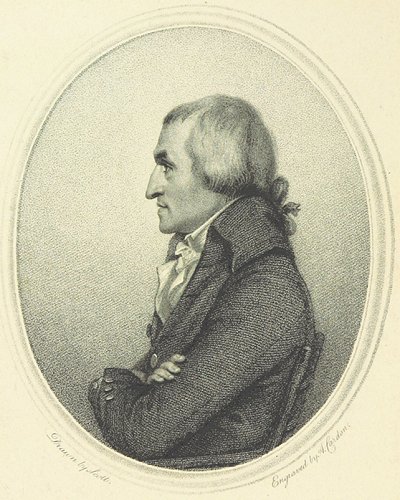 ] was a man of extraordinary talents. He was an expert surveyor and researcher who produced maps and publications of astonishing detail. The fruits of his labours as Surveyor-General of the Honourable East India Company, which included the first large scale (and largely accurate) maps of the Indian subcontinent, earned him the epithet ‘the father of Indian geography’. A similar title, the father of oceanography, was bestowed upon him for his pioneering work on ocean currents. And for his treatises on the geography of the ancient world, it has also been suggested that he could be regarded as the father of historical geography.

James Rennell was a father in the literal sense too. Biographies which include more than passing reference to Rennell’s family life show that his wife Jane bore him four children: Jane (1773–1774), Jane (1777–1863), Thomas Thackeray (1779–1846), and William (1781–1819). That list presents a problem though, as the wife (later widow) of Roger Atcherley was named Mary. If Mary’s recorded age at death was accurate she was born around 1775, between the two aforementioned daughters of James Rennell. So, was Mary not, despite the claim in the notice of her death, a daughter of James? Or are there errors of omission in the various biographies of that distinguished geographer?

The most detailed biography of Rennell is Major James Rennell and the Rise of Modern English Geography, which was written by Clements Markham and published in 1895. Markham had access to a wide range of sources relating to Rennell’s life and work, including family papers. He wrote about James Rennell’s early years in Devon, the loss of his father, Captain John Rennell, when James was just 5, and how James was taken in by the Rev Gilbert Burrington, Vicar of Chudleigh, and enjoyed a much happier childhood than might otherwise have been the case.

In 1756, at the age of 14, James joined the Royal Navy as a midshipman under Captain Hyde Parker aboard the frigate Brilliant. He served during the Seven Years’ War with France, in French and British waters to begin with. Then, aboard the America, James headed for the East Indies where he transferred to the Grafton and took part in the siege of Pondicherry, a French colonial outpost. Further voyages followed, during which James honed his mapping skills and was seconded to the East India Company as a surveyor.

A full commission with the Company followed when James returned to India, and then – at the age of 21 – James was given a commission with the Bengal Engineers and the job of Surveyor by the Governor of Bengal. This was a huge challenge for a young man who had spent much of the previous seven years carrying out survey work at sea. It would involve another seven years of survey work, on land, during which time James would come under attack by both native people and native wildlife. One of the latter attacks proved to be fatal for the leopard. The results of the former however very nearly cost James his own life.

Although James survived, he would never fully recover from the severe wounds he received at the hands – or rather the sabres – of a group of Sanashi Fakirs in 1766. Thankfully, James recovered sufficiently to continue his work. Following this incident Lord Clive made James Surveyor General, and ordered that he should from then on be accompanied by his own sepoys for protection.

It was during his years in Bengal that the then Captain James Rennell met Jane Thackeray (a great aunt of the novelist William Makepeace Thackeray). According to Markham, “Jane was not beautiful, but she was a sweet, sensible, unaffected woman, and much beloved.” She was certainly much beloved by James. The couple were engaged for nearly a year, finally tying the knot at Calcutta (now Kolkata) on 15 October 1772. In a letter to his former guardian Gilbert Burrington, written in 1776, James wrote: “I cannot help repeating how supremely happy I am in possessing such a woman as Mrs. Rennell.”

By this time James had been promoted to the rank of Major. He and Jane had been blessed by the birth of a daughter, who was named after her mother, and had suffered the loss of their child at the age of one year and six days. James had completed his survey work, and the process of preparing maps of Bengal (14 sheets in total) from the data gathered was heading towards completion. James now wished to return to England – “his wounds had permanently injured his constitution, and made it impossible for him to prolong his residence within the tropics”. He decided to retire, and his request for a pension was granted.

In March 1777, after spending nearly two decades away from his native land, James set sail for home, with Jane, aboard the East Indiaman Ashburnham. When this vessel called at St Helena, the Rennells remained on the island so that Jane could give birth. A second daughter named Jane was born there on 12 October 1777. The Rennell family finally arrived at Portsmouth on 12 February 1778, aboard the Hector. 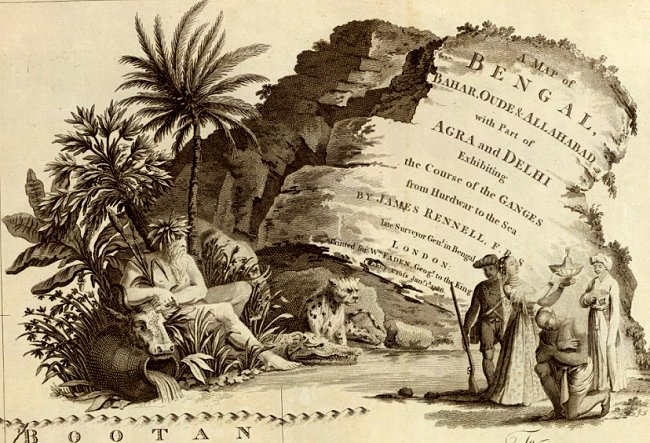 James and Jane would spend the rest of their lives living in London, which is where their two sons were born and where James got his maps of India published before he began work on the numerous other projects which would earn him so many accolades. (Pictured above is the title from the top right corner of James’s map of Bengal, Bahar, Oude & Allahabad.)

Despite the access he had to family papers, Clements Markham made no mention of Mary Rennell in his biography of James the geographer. In fact, given that Mary Rennell had three sons from her marriage to Roger Atcherley, the following short passage by Markham seems to categorically rule out the possibility of her being the Major’s daughter:

I have received much kind assistance in my work, without which I could not have undertaken it. Mrs. Rennell Rodd the widow of Major Rennell’s only grandson placed at my disposal her husband’s manuscript volume of family history, containing numerous memoranda of great interest, several letters from India, an important letter from Sir Edward Sabine, the series of letters from Major Rennell to his grandson […]. Mrs. Rennell Rodd also lent me the Thackeray family history by Mrs. Bayne, privately printed, and containing the memoirs of Mrs. Rennell’s family, with notices of Major Rennell and his children.

Neither of James and Jane Rennell’s sons fathered children. The grandson referred to above was James Rennell Rodd, the only child of Jane Rennell the younger and her husband Captain (later Sir) John Tremayne Rodd (who were married on 5 October 1809). On the death of Jane Tremayne Rodd, née Rennell, in 1863, she was described as “Jane, relict of Vice-Admiral Sir J. Tremayne Rodd, K.C.B., and only daughter of the late Major Rennell.” Case closed? Not just yet…

Sabina Pugh, a descendant of Roger and Mary Atcherley, told me that according to the family history book compiled by her father, “Mary Rennell was the (illegitimate) daughter of Captain James Rennell […]. Her mother was supposed to have been the daughter of the Nawab whom James Rennell worked closely with.” An interesting theory to say the least – in fact a distinct possibility. As Ronald Hyam noted in Empire and Sexuality, The British Experience:

The initial pattern in all early European empires tended towards intermarriage with local women. The keeping of mistresses was not uncommon in eighteenth century Britain itself. So the keeping of a mistress in British India became a well-established practice by the later eighteenth century, defended as increasing the knowledge of Indian affairs. Some officers recommended it quite openly, and the pattern was set at the highest level.

Of course, without some solid evidence we can’t say with any certainty that James Rennell was one of the many British men who had sexual relations with one or more native women in British India. Fortunately, while pursuing this line of enquiry a few years ago, I found that such evidence does exist. And during the course of researching and writing this story I discovered that someone else had uncovered the facts several years before me!

Durba Ghosh, in Colonial Companions (published in 2000), stated: “Between 1775 and 1785, many residents and political agents of the Company had Indian mistresses. Many covenanted Company officials such as Harry Verelst, Philip Francis, James Rennell, John Shore, Neil Edmonstone, Charles Warre Malet, and John Bristow had Indian female companions.” And with regard to Rennell specifically, Ghosh wrote: “James Rennell, the first British mapmaker of India […] had two illegitimate children with an Indian woman.” (The first of the two passages just quoted also appears, in a modified form, in Ghosh’s 2006 publication, Sex and the Family in Colonial India.)

So James Rennell had fathered not one, but two illegitimate children. Details of both are to be found within the records of the India Office, held at the British Library. I first found the records in question through the British Library’s online India Office Family History Search, which provides abstracted information from the original records. When Findmypast digitised the India Office records and put them online, images of the originals became available to view. Within the British India Office Ecclesiastical Returns of “Burials, Christenings & Marriages of the Garrison of Fort William” is the following entry among the “Christenings in Out Settlements” in 1770:

Mary Atcherley, née Rennell, was therefore rather older than the records of her death suggest, and she was born before the marriage her father, Captain (later Major) James Rennell, to Jane Thackeray. She had an older sister too, Elizabeth, who was also born out of wedlock – and about whom I know nothing more. The place of both girls’ birth and baptism, Dacca in Bengal (now Dhaka, the capital of Bangladesh), is shown in the above extract from their father’s map of Bengal, Bahar, Oude & Allahabad.

The geographer’s daughter has now been put on the genealogical map. We know where, when, and (in part) to whom she was born, and we know where and when she died. But what of her life in between those dates and places? Mary Rennell came to England, married the Rev Roger Atcherley, and raised children – the other, previously unacknowledged grandchildren of Major James Rennell. Mary’s life between birth and death also needs to be explored and mapped out.

> On to Mary Atcherley, née Rennell: A Eurasian in England