< Back to Mary Atcherley, née Rennell: A Eurasian in England.

Writing about the lives of women in times gone by can be a challenge, thanks to the lack of records and other traces of them (compared with those which tend to survive in respect of men). Such is the case with Mary Atcherley, née Rennell [

]. Something of a shadowy figure in this story, appearing only in a series of fleeting cameos in her own biography, Mary is defined here primarily by her relationships with, or possible similarities to, other people. But in looking at the lives of those with whom Mary shared her existence we might just catch enough glimpses of the woman herself to get to know her. So let’s conclude her tale with a look at the lives with which Mary was most closely entwined – those of her husband and children.

] was the first child born to the Rev James Atcherley of Shrewsbury and his wife Eleanor (née Griffiths). He was baptised at St Mary’s church in that town on 23 February 1768, and was educated at Shrewsbury School, where his father James was one of the masters (eventually the head master – see The Rev James Atcherley, Head Master of Shrewsbury). On 22 June 1786, at the age of 18, Roger was admitted to St John’s College at Cambridge. Four years later, on 5 May 1790, he migrated to St Mary Hall, Oxford. His ordination as deacon took place at Westminster St James on 20 March 1791.

Later in 1791 Roger acted as curate at Lydbury North in Shropshire (where his father was vicar), officiating at weddings there on 13 August and 31 December. It appears that he also acted as curate at Norbury, in Staffordshire, during that year. I have no more records of Roger until 12 November 1794, when he received a Commission as Chaplain in Lieutenant Colonel Rochfort’s Regiment.

Numbered as the 119th Regiment of Foot in 1795, Lt-Col Rochfort’s Regiment was one of several short-lived “Ephemeral Corps” raised following Britain’s declaration of war against revolutionary France. Roger’s brother and fellow clergyman John Atcherley also served as a chaplain during the French Revolutionary Wars and in the Napoleonic War that followed, but with the Navy (see The Rev John Atcherley and his naval chaplaincy). Younger brother James meanwhile saw action as an officer of the Royal Marines during these conflicts (see An Atcherley at Trafalgar).

Roger’s army chaplaincy did not last long. According to Army Lists, he was placed on half pay in 1795 – the 119th Regiment itself was disbanded in 1796. Roger, still nominally a chaplain, remained on half pay until his death, which must have provided some financial security. 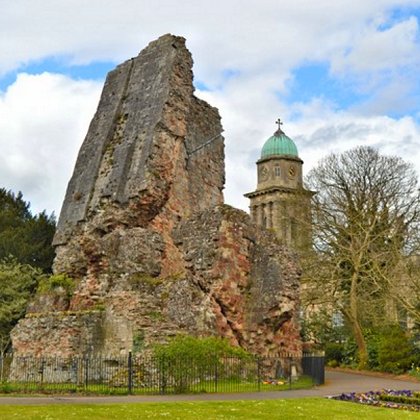 Although shown as being resident in Middlesex at the time of his wedding to Mary Rennell in 1799, Roger had earlier that year been granted a game licence in Staffordshire. There, he resided in the village of Swindon in Wombourne parish. This was about nine miles to the east of Bridgnorth in Shropshire, a place to which Roger and Mary would soon move. (The picture here shows the remains of Bridgnorth castle and the church of St Mary Magdalene, which would  become familiar sights to the Atcherleys). Prior to that however the couple spent some time at Llanfair Caereinion, in Montgomeryshire, Wales.

Llanfair was where the birth and baptism of Roger and Mary’s first child, a boy, took place. In honour of Mary’s father, her son was christened, on 31 October 1800, as James Rennell Atcherley [

]. Mary’s true maternal heritage might have been a secret, but her paternal ancestry was very much not! Unfortunately, it seems that the clerk misheard the important but unfamiliar middle name. As a result the parish register bore witness to the baptism of “James Reynolds Atcherley, Son of The Revd. R. Atcherley and Mary his Wife”.

Roger and Mary had settled in Bridgnorth by 1802, and the second and third of their three sons were born in that town. The births of all three Atcherley boys were recorded for posterity in Roger’s New Testament and Prayer Book, which originally belonged to one Andrew Griffiths (possibly Roger’s maternal uncle of that name). Here is what was written in it, in respect of Roger and Mary’s children:

As you can see, Roger and Mary’s second son Joseph [

] died when he was less than three months old. He was buried at the church where he had been baptised, St Mary Magdalene in Bridgnorth. Although Roger Atcherley was a clergyman, he was neither the incumbent nor the curate of his local parish church. Entries in St Mary’s marriage register show that Francis Salt was curate in and around 1802, so it seems likely that he, rather than Roger, conducted both the baptism and the funeral of little Joseph Atcherley.

Roger might however have baptised his and Mary’s third son, John Atcherley [

]. Although this event apparently took place on 18 Jun 1804, Roger Atcherley’s New Testament and Prayer Book of the Atcherleys is the only place I know where it was recorded. Another baptism for John, on 12 January 1810, was carried out at Tasley – a small village just outside Bridgnorth – by the Rev Joseph Morris (who would later become John’s father-in-law).

During the family’s time at Bridgnorth, Mary got to know her Atcherley in-laws James [

] – the three generations of the family might even have shared the same house there. The Rev James Atcherley was with them for all too short a time. He passed away on 3 March 1804, at home in Bridgnorth’s Castle Street aged 73. Eleanor Atcherley lived for another five years and was 72 years old when she died. Her burial, at Bridgnorth St Mary, took place on 21 August 1809. I wonder if she had doted on her grandchildren as grandmothers do today – and whether, in her final years, she became something of a substitute mother to her daughter-in-law Mary?

Bridgnorth was home for Roger, Mary and their sons for several more years after Eleanor Atcherley’s death. Evidence for this can be found in the published lists of those who purchased game licences in 1811, ’12 and ’13 – all of which included Roger Atcherley. What I find odd is that for the period of at least 12 years during which the Atcherleys lived at Bridgnorth, no records of Roger being employed as a clergyman have yet come to my notice. His situation however – both in terms of occupation and location – changed around 1818 when Roger began ministering, as a curate, to the souls of those living in the parishes of Sheinton, Hughley and (soon afterwards) Much Wenlock.

Much Wenlock, Priory of St Milburga

What brought about this change – why did Roger decide he needed to supplement the half pay he was receiving from the army? Perhaps extra money was needed for the education of his and Mary’s sons, who were by that time in their mid to late teens. It appears that the family moved 8 miles north-west from Bridgnorth to Much Wenlock, a little further into the heart of Shropshire. Much Wenlock was in turn 4½ miles from Hughley, and just 3 miles away from Sheinton (or Shineton was it was then known).

Sheinton church’s baptism and burial registers were inscribed with Roger Atcherley’s name from 15 April and 4 June 1818 respectively. Roger’s last baptism at Sheinton – his sixth – was conducted on 17 February 1819. Three of those six christenings were for children who Roger described as “base born”, the last of whom was Elizabeth, “Base born Daughter” of Elizabeth Hill, “in the absence of Saml. her Husband”. Even in the entry Roger made for his penultimate burial at Sheinton, he could not resist describing the deceased, Richard Hill – who was 22 years old – as base born. I sincerely hope that Roger was completely unaware that this description could have been applied equally to his own wife!

Judging by the entries in the parish registers of Hughley, Roger Atcherley’s curacy there began at about the same time as his position in Sheinton. 31 May 1818 was the date of the first baptism her carried out at Hughley, but his first funeral there did not take place until 11 December that year. It was around that time that Roger also began to conduct ceremonies at Much Wenlock, in the registers of which place his name was suffixed with the words “Curate of Shineton” or “Curate of Hughley”.

Following the death of Much Wenlock’s own curate, the wonderfully named T Dennison Tinklar, the curacy was given to Roger Atcherley. The first christening to be carried out by Roger in this new role took place on 22 August 1819. He performed all of the next 42 baptisms at Much Wenlock, up to 3 May 1820. During that period Roger also conducted six weddings and 33 funerals there. The curacy of the parish then went to the Rev F Parsons.

Roger performed a few more baptisms at Much Wenlock, from 25 Aug to 8 October 1820, but did so as the Curate of Hughley – a position he had retained throughout his Much Wenlock curacy and continued with for some months thereafter, into 1821. The baptism he performed at Hughley on 19 August 1821 was however Roger’s last. He died, at home in Much Wenlock, 8 days later on 27 August, and was buried at the parish church on the 30th of that month.

On 23 October 1821, the now widowed Mary Atcherley of Wenlock completed the form “Required for placing on the Pension, the Widow of an Officer who died on Half Pay.” Along with that document, she provided proof of her marriage to Roger Atcherley, his death, his burial, and also the cause of his death: a letter from the surgeon who attended Roger stated that he died of “Dropsy of the Chest”. This condition, also known as hydrothorax, was one which developed gradually and often caused no problems until the build-up of fluid in the chest became so great that it caused breathing difficulties.

Mary had suffered a great loss, but thanks to Roger’s brief spell as an army chaplain, she would have the security of a regular income in her later years. Mary was also able to see her two surviving sons grow up and embark on successful and respectable careers. Her youngest son John Atcherley became a surgeon in Liverpool (see Doctor Atcherley’s Casebook – Part 1), while her eldest, James Rennell Atcherley combined work as a veterinary surgeon with keeping an inn, at Bridgnorth (see James Rennell Atcherley and an Electoral Conspiracy). 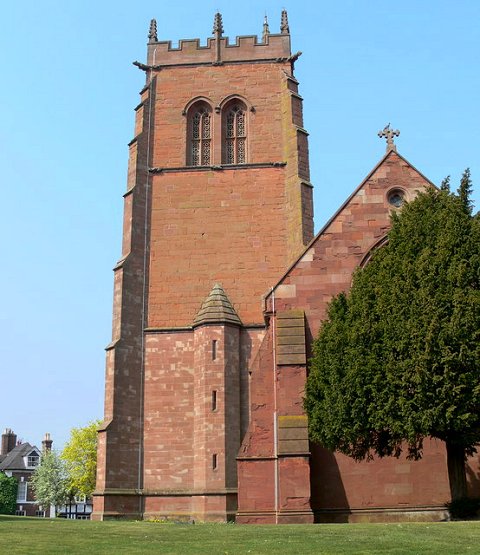 It was probably so that she could be close to James – and his family – that Mary herself moved back to Bridgnorth. The 1841 census recorded Mary Atcherley, who was of independent means, living with the Corser family in Castle Street. Her age was given as 61 (when she was in fact aged about 70), and her place of birth as “Foreign Parts”. Following her death in February 1842, Mary was buried (on the 11th of that month at Bridgnorth St Leonard, pictured here), with some of the notices of her passing stating that she was the daughter of Major James Rennell – an identity she maintained right to the last.

In the years that followed, Mary Atcherley, née Rennell, would be ‘written out’ of accounts of her famous father’s life. But now Mary can take her place in the records not only as the Eurasian daughter of James Rennell, but also as a wife, a mother, a widow – and a fascinating, if somewhat mysterious woman in her own right.