], became a mother at the age of 36, and a widow (with children aged 7 and 18) at 54. Later, the deaths of her daughter and son-in-law meant that Elizabeth became guardian to seven grandchildren – at the age of 85!

Elizabeth was most likely the Elizabeth Gittins who was baptised at Alberbury St Michael and All Angels on 15 April 1691. The parish register recorded that she was “ye Daughter of Thomas Gittins & Elizabeth his wiffe of Baulsley”. At that time a township in the parish of Alberbury (which lay partly in Shropshire and partly in Montgomeryshire), Bausley today lies in the parish of Bausley with Criggion, in Powys, Wales.

Some clue as to the standing of Elizabeth’s family can be found in documents dating from 1766 held by the National Library of Wales, in which Elizabeth is described as the sister and coheir of Thomas Gittins late of Uppington, in the parish of Alberbury, county Montgomeryshire, gent.

The next entry in Alberbury’s parish register relating to Elizabeth Gittins appeared on 23 June 1726: “Thomas Atcherley of ye parish of Welsh ffelton and Elizabeth Gittins of this parish were Marryed by Lynence”. Thomas, “the son of Tho: Atcherley & Sarah his Wife of Twyford”, had been baptised at West Felton St Michael on 6 March 1689/90 and was therefore of a similar age to Elizabeth. Both were in their mid-30s when they wed. 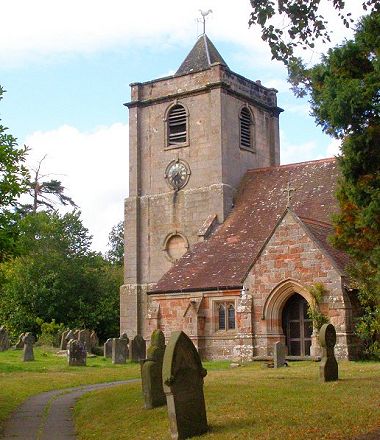 I know very little about this Thomas Atcherley [

]. He was the firstborn son, and third child of six, born to Thomas Atcherley and Sarah (née Williams). In adult life, he was a Church Warden for West Felton St Michael (pictured right as it appears today) in 1733/34. He was also, in 1740, a Trustee and minor legatee in the will of John Maddocks of Daywell, and named (probably as a Trustee) in a property transaction entered into by Sarah Maddox of Daywell. In both of the latter documents, Thomas was referred to as a gentleman.

“Thomas Acherley of Twiford in the County of Salop Gentleman” made his own will on 15 Jun 1745, when he was “Sick and weak in body but of a sound and perfect mind memory and understanding”. (He died within the week and was buried on 21 June 1745.) Thomas gave and devised unto his “Loving Wife”, for the term of her natural life, “one annuity or yearly Rent charge of Five pounds” which was to be paid out of his purchased estate “at Michaelmas and Ladyday by Equal portions”. Elizabeth was also to receive all of Thomas’s household goods, with the exception of his “Green Bed and all appurtenances thereunto belonging”, his “Wainscoat Chest”, the “Hanging press in the Room where the Green Bed is”, the desk in the parlour, and his long table.

Provision was also made for Thomas and Elizabeth’s children. Elizabeth bore two sons and one daughter during the course of her marriage, all baptised at West Felton: Thomas junior [

] on 31 Dec 1737. Sadly, John died aged about 6 and was buried on 15 February 1736/37. That left Mary, aged 7 when her father died, and Thomas, aged 18. Mary was to receive the sum of £400 at the age of 21. Thomas junior was to receive the household goods listed above, all of his father’s stock and implements of husbandry, and the residue of his purchased and personal estate.

Thomas Atcherley junior had been educated at Oswestry School. Although he could probably have lived quite comfortably as a gentleman farmer, on 2 November 1747 Thomas was admitted to Peterhouse College, Cambridge and he pursued a career as a clergyman and schoolmaster. I wonder what influence, if any, Elizabeth had over the choices made by her son?

Securing the future of daughter Mary would mean matching her with a suitable spouse, when she reached the right age. That time came in 1756, when Mary was 18: her husband was to be Richard Downes [

], a young Gentleman of 21. Although he had been baptised (on 8 November 1734) in the parish of Melverley, by the 1740s Richard – with his parents and siblings – was living at the Argoyd (or Argoed) in the neighbouring parish of Kinnerley. The evidence for this is the will of his father, also named Richard, who died in 1742.

The extent of the young Richard Downes’s estate was made apparent in the detailed marriage settlement drawn up on 8 June 1756. As part of that settlement, a farm in Melverley, along with various houses and pieces of land in Melverley, Kinnerley and Welsh Hampton, were to be conveyed by Richard to Griffith Evans (a clergyman) and John Davies. These two were to hold the property in trust for the use of Richard Downes during his life, and then – subject to an annual payment of £30 to Richard’s widow – for the use of Richard’s oldest surviving son and his descendants. (In addition, the £400 left to Mary Atcherley in her father’s will was to be paid to Richard Downes by Mary’s brother Thomas, to provide for the younger children of the Downes-Atcherley marriage.)

The marriage of “Richd. Downs of the parish of Kynnerly Single man and Mary Atcherley of [West Felton] Single woman” took place at St Michael’s church in West Felton on 11 June 1756. (The map, left, shows the locations of Argoed, Kinnerley, Twyford and West Felton.) The ceremony was performed by Mary’s brother, Thomas Atcherley, who was then Curate of that parish. One of the witnesses who signed the register was Thomas’s wife Anne, and I have no doubt that Elizabeth Atcherley was also present, pleased to see her daughter marrying well.

It is difficult to be precise about the number of children born to Richard and Mary Downes over the two decades following their wedding, as it appears that not all of their offspring were baptised. Thirteen children can be identified from a combination of baptismal and burial records – several died in childhood. Amongst the casualties were two sons named Richard who perished in infancy. The third son of that name survived and flourished, along with six siblings.

In the middle of this period – 1766 – Elizabeth Atcherley was involved in a number of transactions involving property which she owned or had an interest in. Lands and buildings owned by Elizabeth in the parishes of Worthen and Alberbury were exchanged with lands and buildings in the parishes of West Felton and Ruyton XI Towns, owned by her son Thomas. Another deal involved Elizabeth, her son-in-law Richard Downes, and Richard’s brother William Downes, with William paying Richard £500. This and another agreement were ‘assignments of terms in trust’ to attend to or protect the inheritance of properties belonging to Elizabeth (and her son Thomas) in the parishes already mentioned.

In 1775 tragedy struck the Downes family. Childbirth was a risky business for both mother and child until relatively recent times, and it appears that the birth of her thirteenth child, Benjamin, was when Mary’s luck ran out. The record of Benjamin’s baptism, on 24 March 1775, read: “Benja’n Son of Richard Downes of Argoyd by Mary his late Wife”. “Mary Wife of Richard Downes Gent. of Argoyd” had been buried on the 16th of that month. Within 18 months the Downes family was robbed of its father as well as its mother: Richard died on 29 August 1776 and was buried on the 31st.

In February 1777, administration of “the Goods Chattels and Credits of Richard Downes late of the Argoed in the parish of Kinnerley” was granted to “Elizabeth Atcherley Widow the Curatrix or Guardian lawfully assigned to Elizabeth Downes Sarah Downes Mary Downes Spinsters and William Downes Minors and John Downes Richard Downes and Samuel Downes Infants” (Samuel appears to be in error for Benjamin).

At the grand old age of 86, and having long since seen her own surviving children reach adulthood, Elizabeth Atcherley now found herself the “Curatrix or Guardian” of seven grandchildren, whose ages ranged from 17 to under one year old. As if this responsibility was not enough, in 1785 Elizabeth (along with her oldest grandson, William Downes [

]) then found herself the subject of legal action taken by her late son-in-law’s uncle!

Richard Downes had died owing his uncle William Downes £580. William tried to recover this money from Elizabeth Atcherley (administratrix of Richard’s personal estate) and William Downes the younger (who inherited Richard’s real estate), believing that the value of Richard’s estate was more than enough to cover the debt owed to him. Having failed to obtain the money, William took his case to the Court of Chancery in London. Both sides made their depositions, and from them it is clear that although Richard Downes had died possessed of a great deal of property, he was also saddled with several substantial debts.

The Court decreed that John Hett, Esquire, one of its Masters, was to prepare a full account of the personal estate of Richard Downes, based on evidence provided under oath by the parties involved, so that Richard’s creditors could be paid. An advertisement was placed in the London Gazette of 24 March 1789 (pictured above) inviting other creditors to come forward. And that is where the records relating to this action dry up. It seems likely that the matter was settled ‘out of court’.

Elizabeth Atcherley’s two youngest granddaughters, Sarah and Mary, married brothers Arthur Rider and William Rider, on 7 May 1782 (at Shrewsbury Holy Cross & St Giles) and 21 October 1785 (at Llandrinio, Montgomeryshire) respectively. Their older sister Elizabeth Downes married George Downes, quite possibly a relative, at Meifod in Montgomeryshire on 25 May 1788. William Downes, heir to the estate of the late Richard Downes, married Jane Edwards at West Felton on 17 January 1790. I can only assume that that by this time the legal dispute with his great uncle had been resolved and the status of his inheritance settled. Certainly, the Argoed remained in his possession – and was handed down to several generations of his successors.

Meanwhile Elizabeth Atcherley continued to reside in the parish of West Felton. In 1784 she was recorded as owning 9 acres, 2 rods and 2 perches of land there. She died after the marriages of grandchildren Sarah, Mary, Elizabeth and William Downes, at the amazing age of 99. The West Felton parish register recorded the burial of “Elizabeth Atcherley of Twyford” on 1 July 1790. 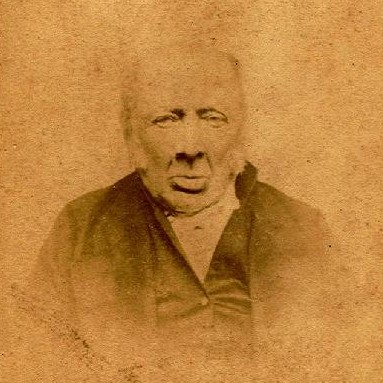 The story of Atcherley and Downes does not end with Elizabeth’s death. All seven of her grandchildren were still alive in 1792 (when all but William were left bequests in the will of their great uncle William Downes). And all but John and Benjamin can be traced for several years, or even decades, beyond that time. Richard Downes [

] (pictured right) – the third of Elizabeth’s grandsons to be given that name – married twice and lived most of his adult life in the Shropshire parish of Worthen. In honour of his mother and his grandmother, he named one of his sons Richard Atcherley Downes, a name which was then given to three more of his descendants over the course of the next hundred years (see Atcherley forenames – surnames  D – F). The fourth and last Richard Atcherley Downes lived until 1984.

With special thanks to Julian Hargreaves for providing me with his transcripts of documents from The National Archives, Kew, and Shropshire Archives, and also providing the photograph above of Richard Downes.

Picture credits. West Felton St Michael: Photo by the author. Map showing Argoed, Kinnerley, Twyford and West Felton: This work is based on data provided through www.VisionofBritain.org.uk and uses historical material which is copyright of the Great Britain Historical GIS Project and the University of Portsmouth; it is used under a Creative Commons licence. Extract from London Gazette, issue 13080, 24 Mar 1789, page 173: used under the Open Government Licence v2.0. Richard Downes (1773 – 1860): Photo appears with the kind permission of Julian Hargreaves.