< Back to Muriel Hope Atcherley: In and Out of Africa – Part 1

Lions and leopards lurked in the undergrowth, and lions actually killed and carried off Dr. Hemsted’s horse from the stable near the house. Two lions were later shot on what is now the front lawn. 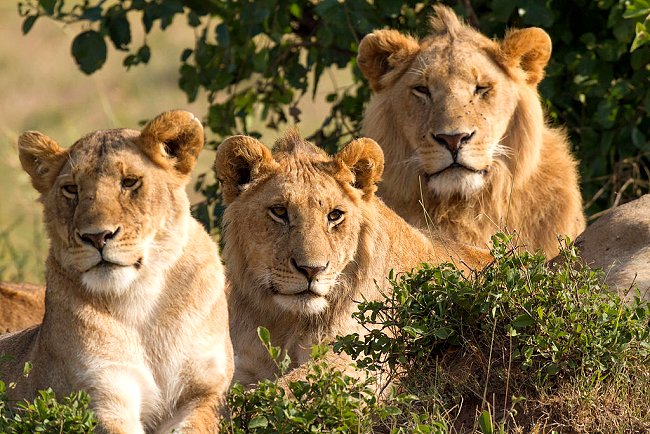 According to the article from which the above quote is taken, Dr Henry Hemsted [

] (who had married Muriel Hope Atcherley [

] in 1911) bought his plot of land at Ngong in 1914. Whether or not this is true is open to question, given that he and Muriel did not take up residence in British East Africa until 1919. Even then the couple were based at Nairobi, and the earliest record I have found confirming their residence at Ngong dates from 1920. Perhaps a more pertinent question is why Henry and Muriel chose to leave England and set up home amidst the lions and leopards of Africa.

Henry Hemsted’s career as a doctor had been a very successful one, and there is no apparent reason why it could not have continued. Maybe that was not enough for Henry. A spirit of adventure, and perhaps the chance to earn a more profitable living in a country in the early stages of being opened up to Western settlers, may have played a part in his decision to emigrate. He was certainly not the only member of his immediate family to start a new life on the other side of the world: his brother Rustat Henry Hemsted did so in Australia. Other Hemsteds, almost certainly relatives, were already living in East Africa (indeed, when Henry and Muriel returned to England from their first trip to the Protectorate in 1913, they were accompanied by a 37-year-old Miss Hemsted). Those relatives may have encouraged Henry to stake his own claim in the East African highlands. I do wonder what say Muriel had in the decision – and I hope she was a willing partner in the adventure.

The article which tells us of the lions and leopards on the Hemsted property also describes Henry and Muriel’s home there:

The original house consisted of a small grey stone, one-storied building with a wide veranda facing south-west. Later a square tower was added to the side, but connecting with the house. The tower contained a downstairs bedroom with bathroom attached, and an upstairs sitting-room, over which, higher still, stood the water-storage tanks.

The author went on to describe the building as “rather an ugly little cottage” which was only transformed into “a pretty white house with a decidedly colonial aspect” after the Hemsteds left. Another publication provides us with a detailed description of the Hemsteds’ estate. Rather than paraphrase, I will quote it verbatim:

Beyond Major Steele’s splendid coffee and fruit farm is Dr. Hemsted’s property; with its charming stone homestead picturesquely placed amongst indigenous timber, green lawns, and vividly coloured flowers, and facing Ngong Hills. This settler concentrates on coffee and has erected a simple, efficient pulping factory, near the little river, which is noteworthy for an ingenious automatic feeding device designed by the owner. 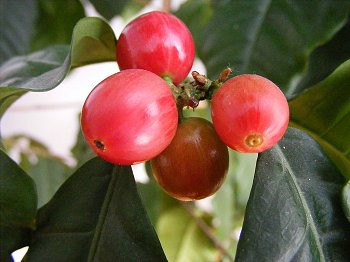 considerable area of this estate remains under its beautiful woodland; and as this section is alongside the main road it has been decided to retain it in its natural state and sell it off in small  blocks as a residential area for retired officials and others who desire perfect rural, sylvan surroundings within easy reach of Nairobi.

Dr. Hemsted is deservedly popular in a district where there is no medical assistance nearer than town; but he himself has nothing but praise for the healthiness of the entire countryside. Fever, he states, is unknown here and had he not retired from his profession, after many successful years of practice before the war in Bournemouth, and taken to coffee-planting, Ngong would be, from a business point of view, one of the last places to choose for settling down in.

Lemons were originally grown here in wholesale quantities; but to-day coffee is taking the place of this fruit in the cultivation paddocks. A considerable area of this farm still remains under forest. The land is, however, of high quality, equal indeed to anything in the district, and will make a very valuable coffee estate when cleared and planted.

Neighbouring south of Dr. Hemsted’s and occupying a loop in the Mbagathi where it turns towards the east is the main estate of the Karen Coffee Company, a Swedish enterprise that has gone in for this favourite crop on a wholesale scale. 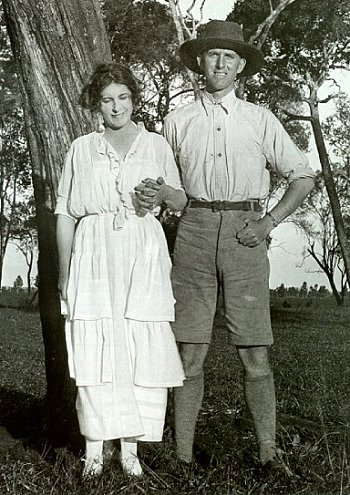 Karen Coffee Company Ltd was owned by relatives of a young Danish woman, Karen Blixen (pictured left with her brother) who, as Karen Dinesen, had left her homeland in 1913 to marry the Swedish Baron Bror Blixen-Finecke and with him run a coffee farm in British East Africa. The farm at Ngong was a new, larger estate bought in 1916. Karen Blixen took over the management of the farm in the early 1920s after she and her husband separated (they divorced in 1925). The farm, the local people (settlers and natives), and Karen’s lover Denys Finch Hatton, were immortalised by Karen in the book she later wrote about her experiences, Out of Africa (since adapted into an Oscar-winning movie).

Knowing that Karen Blixen and the Hemsteds were near neighbours, I searched her book for any reference to them – and found the following short chapter, entitled The Elite of Bournemouth:

I had as a neighbour a settler who had been a doctor at home. Once, when the wife of one of my houseboys was about to die in childbirth, and I could not get into Nairobi, because the long rains had ruined the roads, I wrote to my neighbour and asked him to do me the great service of coming over and helping her. He very kindly came, in the midst of a terrible thunderstorm and torrents of tropical rain, and, at the last moment, by his skill, he saved the life of the woman and the child.

Afterwards he wrote me a letter to say that although he had for once, on my appeal, treated a Native, I must understand that he could not let that sort of thing occur again. I myself would fully realize the fact, he felt convinced, when he informed me that he had before now, practised to the élite of Bournemouth.

The doctor referred to in the above passage is not named, but there is no doubt at all in my mind that Henry Hemsted, who had lived in Christchurch and practised in neighbouring Bournemouth before serving on hospital ships in the Great War and then settling at Ngong, was the subject.

Karen Blixen was forced to sell her property and leave Africa in 1931. Her coffee farm was already struggling financially, and the slump in coffee prices in 1930 following the Wall Street crash was the final straw. Other settlers were affected too, but Henry and Muriel Hemsted appear to have weathered the storm. The electoral rolls which were published in the Kenya Gazette showed them both at Chestnut Farm, Ngong, (Post Office Box 545, Nairobi) from 1922 through to 1934.

During their years at Chestnut Farm, Henry and Muriel nurtured not only coffee but also children. Their second child, Elizabeth Gay Atcherley Hemsted, born in England 1913, does not seem to have been among them however. I have never been able to establish what happened to her: she did not appear with her parents on a passenger list, nor have I found a death or burial record for her. Although she was named in the 1919 edition of The County Families of the United Kingdom, it is possible that she had already died by that time. However another daughter was born, at Ngong, in 1922, and may still be living. Henry and Muriel also had two sons in Kenya, Rupert Henry Rustat Hemsted and William Richard Tobias Hemsted (known as Toby). All three of these offspring went with their parents on a visit to England from June to October 1928, where they stayed at the Vernon family home, Hilton Park (pictured below). 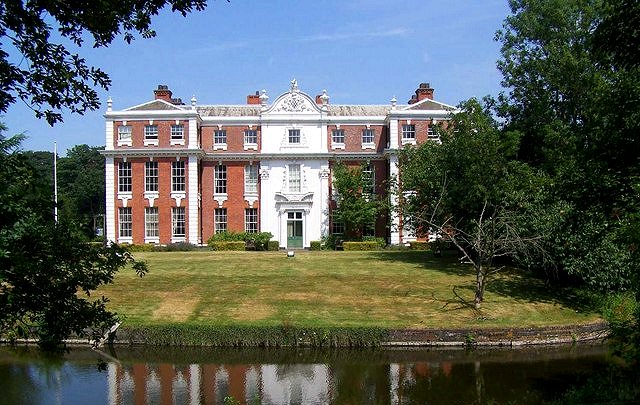 Henry and Muriel’s youngest son, William, was born 8 Oct 1924. He married Margaret Evangeline Stanford (1920 – 2012) and with her had a son and daughter in the 1950s, but he has since passed away. His older brother Rupert, born 30 May 1921, joined the Royal Air Force Volunteer Reserve in the Second World War, and died in Italy on 18 Jan 1944, aged 22. His grave is among those at Naples War Cemetery.

Henry Hemsted also served in World War 2, returning to the duties he performed in the First World War: he was principal medical officer on the hospital ship Amra. He died on 15 Dec 1945, at Naivasha in Kenya, where the family had relocated in the 1930s. Over the years he had served as a member of the Kisumu District Road Board (and had accompanied L D Galton-Fenzi on many of his pioneering motor journeys in the East African territories), a Justice of the Peace in both Ngong and Naivasha, and he continued to be registered as a medical practitioner until his death.

Henry’s widow, Muriel Hope Hemsted, nee Atcherley, married Charles Edward Stuart-Prince in London, England on 18 September 1946. She returned with him to Kenya the following year. The couple visited England again in 1949, returning to Kenya afterwards, but when they made the journey to England in 1954 it was from their new home, in South Africa. Muriel and Charles became naturalized South African citizens in 1960.

Muriel Hope Stuart-Prince died on 17 May 1978 in Port Elizabeth, aged 87. The notice of her death in The Times of London described her as a “Dearly loved sister, mother and grandmother.” She had maintained connections her native England and was dear to the hearts of those who knew her. I think her own heart, after she settled in the Protectorate and Colony of Kenya, was never out of Africa.