] was working as a silk mercer for John Satterfield & Co in Manchester. He was then 27 years of age, having been born in 1813 at Weston Lullingfields in Shropshire, a son of farmer Richard Atcherley and his wife Mary (née Jones). John was baptised – along with his twin brother Richard – at the parish church of Baschurch All Saints on 3 September 1813. The twins’ older brother Thomas stood to inherit their father’s farm (see Water, fire and fever: The trials of Thomas Atcherley), leaving John and Richard to pursue other ways of making a living.

Records relating John between his baptism and his appearance on the 1841 census are almost non-existent. Almost, but not quite. The one record which I have found for John during the period from 1813 to 1841 shows that he did not start his working life at Satterfields. It also shows something of John’s character. The following story, attributed to the (Manchester) Guardian, appeared in the Manchester Courier on 26 May 1838. I have split the report into paragraphs for ease of reading:

Embezzlement by a Shopman—On Saturday, a young man, named William Walker, in the employ of Messrs. Kendall, Milne, and Faulkner, of Deansgate, was brought up at the New Bailey, charged with embezzlement, under the following circumstances:

John Atcherley, a young man, also in the employ of Messrs. Kendall, Milne, and Faulkner, stated, that about two o’clock on Friday afternoon, a lady went into the shop, and bought goods to the amount of 18s. 8d. It was a custom that another shopman should examine the invoices of the goods sold; and, in this case the prisoner brought two invoices to witness, and carried the cash to the cashier in the shop as usual. When he returned, witness observed him put something into his pocket, and that he only gave the customer one invoice, one shilling, and some copper. Witness then went to the cashier who said the prisoner had only paid him 8s. 8d.

Norbury, one of the Manchester police, was called into the shop; and, on searching Walker, he found one of the invoices and four half-crowns in his pocket. It was supposed that he had altered one of the invoices he had shown to Atcherley, so as to include all the articles sold, and given that to the lady. The prisoner acknowledged that he was guilty of the crime laid to his charge, but said it was poverty that induced him to commit it. He was committed to take his trial at the ensuing sessions.

22-year-old William Walker was convicted of embezzlement at the County General Sessions at Salford on 28 May 1836, and sentenced to 4 months’ imprisonment. John Atcherley meanwhile took his leave of Messrs. Kendal, Milne, and Faulkner (a firm of drapers and silk mercers and later a department store which was bought in 1919 by Harrods Stores Ltd, a company which was itself bought out by House of Fraser in 1959). He went on to bigger and better things at John Satterfield & Co, in St Ann’s Square (pictured below around 1904). It took time for John Atcherley – and co-worker Richard Oliver – to get to the top, although the moment when they got there is difficult to pinpoint. Notices of dissolved partnerships were published in the London Gazette and in the press, so that people would know who to claim (or pay) outstanding debts from (or to). But when new people joined an existing partnership, no such notices were published. Of the three men who took over from Joshua Satterfield when he retired from business at the end of 1838, one (John Bosworth) seems to have departed soon afterwards. Certainly by 1846 the firm was being referred to as “Messrs. Lambe and Morris (the firm of John Satterfield and Co.), of Manchester”, and I have also found “Messrs. Satterfield and Co., now Lamb [sic] and Morris, linen-drapers” in a newspaper report from 1853.

An interesting relationship between Satterfields and the Manchester School of Art developed in 1857, one which was mutually beneficial. The details were given by the Manchester Courier on 6 Jun 1857:

New Designs for Silk Dresses.—For some time there has been complaint amongst silk mercers and their best customers of the want of good and original designs. Messrs. John Satterfield and Co., silk mercers, &c, St. Ann’s-square, Manchester, were stimulated by this want to offer two substantial money prizes to students of the Manchester School of Art for the best original designs, in brocaded patterns, to be applied to silk dresses. […] The [winning] designs were entrusted to Messrs. Winkworth and Proctors, silk manufacturers, Manchester, who have produced dress pieces for Messrs. Satterfield of rare beauty, and in the choicest colors. As specimens of Manchester art and manufacture, several pieces of these rich goods were submitted, by permission, to H.R.H. Prince Albert; they were inspected by her Majesty the Queen, who evinced her approval by ordering dress pieces in each pattern, of cerise and violet colours. […] An impetus will no doubt be imparted alike to art manufacture and the silk trade by the taste and enterprise exhibited by Messrs. Satterfield.

At some point between 1853 and 1865, Mr Morris left the partnership, and Messrs William Bingham, Richard Oliver, and John Atcherley joined. 1865 was when Bingham departed, leaving the other three to carry on business in St Ann’s Square as “Linen Drapers and Silk Mercers […] under the style or firm of John Satterfield and Co.,” and as “Milliners and Dressmakers […] under the style or firm of Cowper and Co.” Two years later, on 3 August 1867, the partnership between Lambe, Oliver and Atcherley expired “by effluxion of time” (or in other words, at the end of the period which the three had agreed the partnership would last). It was in 1867, then, that the partnership of Oliver and Atcherley began, although they continued to use the familiar and trusted name of John Satterfield and Company in association with their own for quite some time. They also maintained the company’s links with the Manchester School of Art, and retained royal patronage. All three of these aspects of continuity are demonstrated in the following report from the Manchester Courier of 28 July 1869:

The Princess of Wales and Manchester Silks. We have been favoured by an inspection of some silks of Manchester manufacture which Messrs. John Satterfield and Co. (Oliver and Atcherley), of this city, had the honour of submitting to the inspection of her Royal Highness the Princess of Wales, at Worsley Hall, during her late visit, and of which her royal highness was pleased to express her admiration and approval, and to make a selection from them. These silks have been made especially for Messrs. J. Satterfield and Co. by a Manchester manufacturer, and are embroidered for one flounce, with trimming for bodice and panier, entirely by Manchester hands, from a design by a pupil of the Manchester School of Art, so that they are a fair specimen of what this district is able to produce the first class of manufactured silks.

1883 was a significant year in the history of Oliver and Atcherley. John Atcherley had died on 16 August 1880, leaving a personal estate valued at less than £30,000 – an amount which gives an indication of the wealth that could be accumulated by successful silk and linen merchants at that time. 1883 was the year in Richard Oliver also passed away, on 4 June. The last census in which he appeared, that of 1881, showed that he was then 64 and living with his wife Elizabeth and two of their children plus a couple of general servants. His birthplace was Lutterworth in Leicestershire, so he was most likely the Richard Oliver who was baptised there on Christmas Day 1816, son of Richard, a schoolmaster, and Ann. The census record contains something else, which helps us to appreciate the scale of the Oliver and Atcherley business: Richard was described as a draper, with 141 employees!

Both Oliver and Atcherley had gone, but the company bearing their names continued. On the death of Richard Oliver, the firm’s surviving partner Thomas Bell Scott took over the running of the company. It would been during Thomas’s tenure that the dress which Simon Howard has acquired, was made (see photos above). When Thomas Bell Scott died, in 1893, his eldest son Percival Brown Scott acquired the business. Within a few months of this, Oliver and Atcherley, “silk mercers, dressmakers, linen drapers, and funeral furnishers,” was amalgamated with ”the similar business also lately carried on in St. Ann’s-square by John Bye and Co. Limited.” The new company was given an old name: John Satterfield and Co Limited. The Oliver and Atcherley ‘brand’ did not disappear forever at that point though.

In the years following 1893, through advertisements and notices in newspapers, and listings in directories, we can track the varying names by which the company was known. Initially, “John Satterfield and Co Limited” was used alone, but sometimes this was suffixed with “late Oliver & Atcherley & John Bye & Co. Limited, Amalgamated” in brackets. Next, following the passing of Percival Brown Scott in 1899, was Satterfield, Bye & Co Ltd, a name which was still in use in July 1913. Not long after this however, it became John Bye & Company – and moved away from its home in St Ann’s Square, to 1 Albion Place in Salford.

This name change and relocation seem to have been consequences of Satterfield, Bye & Co Ltd going into voluntary liquidation at the beginning of 1914. The firm was quickly re-established, in King Street West in the city of Manchester, and by the end of 1914 the name John Bye & Company had “successors to Oliver and Atcherley” appended (again, in brackets). The last newspaper advertisement I have found for the company was on the front page of the Manchester Guardian of 20 April 1922 (see below). The very last published reference to Oliver and Atcherley that I currently know of is a listing in the 1929 Kelly’s Directory of Manchester, Salford and Suburbs for “Bye John & Co. (late Oliver & Atcherley, St. Ann’s square)”. 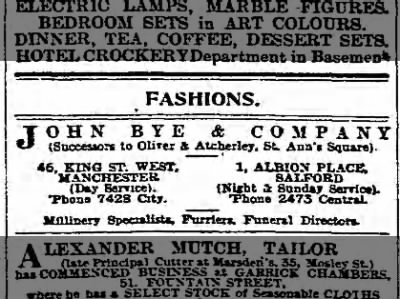 Not only did the names of Oliver and Atcherley survive in association the company they had run, for many decades after their passing, but the firm’s royal patronage was also maintained. A rather ornate ad for Satterfield, Bye & Co Ltd, featured on a page of the Manchester Courier of 11 Jul 1913 (and headed “Firms Who Serve the King & Queen”) proclaimed: “By Special Appointment to H.M. King George V”. It also stated “The Firm have held Warrants of Appointments as Silk Mercers to the Reigning Monarchs since 1851”

Pretty much everybody has a story. In the case of Richard Oliver and John Atcherley, their story as silk mercers and linen drapers began before they were born, and continued long after their deaths – and what a story it was!