] … [died] without issue, 27 Feb. 1834, whereupon the male line of the Atcherley family failed…” – John Burke and John Bernard Burke (1847), A Genealogical and Heraldic Dictionary of the Landed Gentry of Great Britain and Ireland. 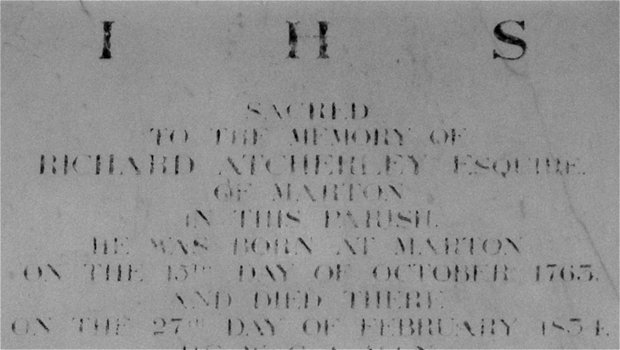 The Marton estate in the Shropshire parish of Middle had been home to Richard’s branch of the Atcherley family for over two centuries, but on his death in 1834 there were no male Atcherley heirs to inherit the estate and perpetuate the family name there. Richard, however, had prepared for this. A little problem like the failure of the male line of his family was not going to bring an end to the Atcherleys of Marton if he could help it.

Richard Atcherley senior had certainly done his bit to keep this branch of the Atcherley family going, having married twice. His first marriage is not mentioned by the Burkes in their Genealogical and Heraldic Dictionary. I myself had not linked the wedding of “Richard Atcherly of St Dunstans, & Anne Baker of Cobham” at Strood in Kent on 9 September 1751, to this particular Richard Atcherley. Were it not for the following report in the London Evening Post I would probably never have made the connection:

Anne had been baptised at Cobham on 9 January 1727, so she would have been about 24 when she married Richard, who was just 19 years of age. It appears that the couple lived in London, where they had a daughter who was named after Richard’s mother, Dorothy. The parish register of St Andrew Holborn shows the baptism of Dorothy, daughter of Richard and Ann Atcherley of Dean Street, Fetter Lane on 30 March 1753 – and her burial a little over six weeks later on 15 May 1753. I am not aware of any other children born to Richard and Anne, and it seems likely that Anne herself died not long after she lost her daughter.

The next appearance made by Richard in a parish register was on the occasion of his second marriage, to Jane Hughes, daughter of the Rev. Thomas Hughes, vicar of Loppington. The wedding took place at Loppington on 18 September 1760, and the parish register shows that Richard was a widower, of the parish of Middle in the county of Salop. Both bride and groom signed the register, as did the witnesses, John Cheshire and Jane’s sister Apphia (or Aphia) Hughes. Richard, now 28, had once again married a bride aged about 24, Jane having been baptised at Shawbury in Shropshire on 7 January 1736.

Richard’s second marriage was also a relatively short one, lasting less than six years and ending, like his first, with a death. This time however it was Richard who went to an early grave. He died, at the age of 34, on 22 April 1766 and was buried at St Peter’s church in Middle four days later. He left his wife with five young children: Dorothy, Jane, Richard junior, Elizabeth, and Thomas.

Dorothy, Jane and Elizabeth Atcherley all married and had one or more children. Dorothy became the wife of the Rev. Robert Taylor,  Jane wed Chester solicitor David Francis Jones while Elizabeth married Robert Corbett of Liverpool, Lancashire. Thomas Atcherley died without issue in July 1801 (for more on Thomas – and a little more on Richard – see The Life and Crimes of Thomas Atcherley). This left Richard Atcherley junior as the only surviving male heir. He married Elizabeth Edwards, daughter of Robert Edwards Esquire of The Razees (later renamed Bosbury House) at Bosbury in Herefordshire, on 26 May 1792 in her home parish. As we know, this marriage produced no children, but Richard was nonetheless determined to secure the future of the Atcherleys of Marton. The method by which he did so can be summed up with the old saying, “Where there’s a will, there’s a way.”

The probate copy of Richard’s last will and testament is held by The National Archives . It is very difficult to read in many places but there is much that is legible, and Richard wrote at length! In his will, “Richard Atcherley of Marton in the Parish of Middle in the County of Salop Esquire” left his lands and property in Shropshire and Montgomeryshire to his nephew, David Francis Jones, Barrister at Law and, after the decease of that nephew, to his great nephew, David’s son, also named David Francis Jones. After the death of the younger David Francis Jones the estate was to pass to his first lawfully begotten son, or (in the event of that son predeceasing his father) to the next oldest surviving son. In the absence of such offspring, the estate was to go to another of Richard Atcherley’s nephews, Robert Falconer Corbett, and his legitimate male heir. Next in line, should Robert not produce any such heirs, was Robert’s brother Arthur Corbett, and his legitimate male heir. Last in line, in the event that no rightful heirs were produced by any of those already mentioned, was Richard’s nephew Whitney Taylor and his first lawfully begotten son (or the next oldest surviving son).

So the Marton estate was to stay within the family – but how to preserve the Atcherley name? Richard had thought of that too. Anybody inheriting his estate, if not already using the surname and bearing the arms of Atcherley, was directed to “use in all deeds and writings whereto and wherein he or they shall or may be a party or parties and upon all other occasions the Surname of Atcherley only and bear the Arms of Atcherley only and shall and do within the space of one year then next ensuing apply for and endeavour to obtain an act of parliament or proper Licence from the Crown or take such other means as may be requisite and proper to enable and authorise him or them respectively to take use and bear the said Surname and Arms of Atcherley.” If these conditions were not met, the estate would go to the next in line.

Less than a month after Richard Atcherley’s death, the following notice appeared in the London Standard:

The King has been pleased to grant unto David Francis Jones, of Marton, in the parish of Middle, in the county of Salop, and of Cymmau, in the county of Flint, Sergeant at Law, his authority, that he and his issue may, in compliance with the last will and testament of his late maternal uncle, Richard Atcherley, of Marton aforesaid, Esq., deceased, henceforth take and use the surname of Atcherley, in lieu of that of Jones, and also bear the arms of Atcherley only.

At a later date, a memorial to Richard was placed inside St Peter’s church at Middle. The inscription upon it reads as follows:

SACRED
TO THE MEMORY OF
RICHARD ATCHERLEY ESQUIRE
OF MARTON
IN THIS PARISH.
HE WAS BORN AT MARTON
ON THE 15TH DAY OF OCTOBER 1763,
AND DIED THERE
ON THE 27TH DAY OF FEBRUARY 1834.
HE WAS A MAN OF INTEGRITY
AND SINCERITY
HE MAINTAINED THROUGH LIFE
A STEADY UNPRETENDING
SENSE OF RELIGION,
AND LOOKED FOR
THE RESURRECTION OF THE JUST.

At the top of the large stone tablet bearing this inscription, the Atcherley arms are carved. Below them is inscribed the family motto, SPE POSTERI TEMPORIS, a Latin phrase which various authors have translated as meaning “in hope of the time to come” or “in hope of the future.” My own grasp of Latin is limited, but given the lengths Richard went to in order to secure the future of the Atcherleys of Marton, I believe the motto has more to do with the hope for or promise of a time of future generations. 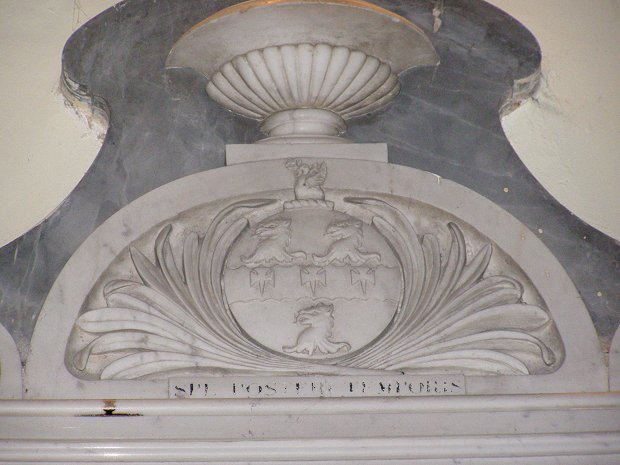 Picture credits: Both photographs by the author.