< Back to Philip Roger Atcherley and his long drawn out bankruptcy.

After arriving in America, Philip Roger Atcherley and his family settled in the state of New York for a while. From there, they moved to Newark, in Licking County, Ohio, where they remained and prospered. That is the story revealed by the decennial United States Federal census, a story which is nice and simple – but also rather incomplete. If we throw information from newspapers and state censuses into the mix, the tale of this Atcherley family’s first decade or so in the States becomes more complete, and more complex. And if we take a closer look at their neighbours in upstate New York, another angle to the Atcherleys’ Atlantic crossing becomes apparent.

The first solid evidence of Philip [

] and his family in America is their appearance on the United States federal census of 1850. The enumerator for Rome, Oneida County, in the state of New York, wrote the family’s surname as Atcherty, and the forename of its head as Philop, but there is no doubt in my mind that this was the Atcherley family from Whitchurch in Shropshire, England. Heading the household was ‘Philop’ (age given as 33), and living with him were Mary [

] (7). The birthplace for all was recorded as England. 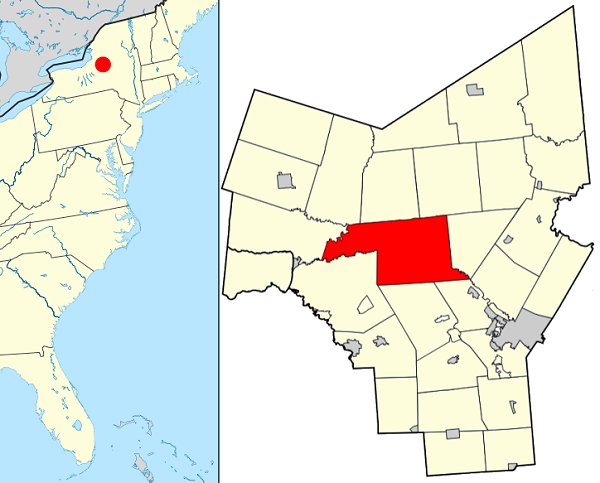 Above left: The Eastern seaboard of the USA, showing approximate location of Oneida County (red circle) within the state of New York. Above right: Oneida County, with Rome highlighted in red.

We ‘met’ Anna Atcherley in the first part of this story, when we saw that she was baptised at Whitchurch on 7 June 1837. On the US census of 1900, her date of birth was given as 10 May 1838! Anna’s sister Mary joined the family in 1839 (or possibly at the very end of 1838) and was baptised on 6 February that year. Although bankruptcy proceedings against her father had started by that time, Philip was recorded as a mercer in the register, which also showed that the family was still living in Whitchurch’s High Street.

The Atcherleys had moved to St Mary’s Street by the time James Roger came along a couple of years later. The US census of 1900 gave his date of birth as 22 January 1842, but he was baptised on 17 February 1841 and appeared on that year’s census so was likely born on 22 January 1841.

Although the record of James Roger Atcherley’s baptism stated that his father Philip was a mercer, on the 1841 census (taken at the beginning of June) he appeared as an auctioneer. So Philip was still selling merchandise to maintain himself and his family, but as an auctioneer (possibly working for an employer) he could deal in goods which he did not own, and which could not therefore be taken away and sold by his creditors’ assignees.

Alongside Philip on the 1841 census were his wife Mary and children “Hannah” (Anna, age 4), Mary (2) and, as we have seen, James (6 months). The fourth and final addition to the family, Sarah, was most likely born on 10 September 1842 – you will not be surprised to learn that the 1900 US census is a year gave the year as 1843. She was baptised on 7 October 1842, with the Whitchurch baptism register recording that her family was then living in Claypit Street, while Philip was still working as an auctioneer. Apart from the later notices in newspapers and the London Gazette relating to Philip Atcherley’s ongoing bankruptcy proceedings, this entry in the Whitchurch baptism register appears to be the last record of the family in England.

When did Philip and his family arrive in America? The entries for Philip’s offspring Anna, James Roger and Sarah on the US census of 1900 all state that they arrived in 1848. We have already seen that the years of birth recorded for these three on the 1900 census were inaccurate, so the year recorded for their immigration may not be correct. There is however a New York passenger list from 1848 which may feature the family – if we can overlook the errors that this record contains!

On 12 June 1848 the Cornelia arrived at New York from Liverpool, England. Amongst the ship’s passengers were a Mr and Mrs Atcherly and their four children, all from Great Britain, all intending to become inhabitants of the USA. The ages of the adult Atcherlys were given as 31 and 30 – making them younger than Philip and Mary would have been at that time (also, Mary was older than Philip). The oldest child was Annie, aged 10 – a good match for Anna Atcherley. But then the details started to diverge more widely from those we would expect if these were Philip and Mary’s children. There was Sarah, aged 7 – but Sarah Atcherley was the youngest child, and aged 5 in June 1848. After Sarah, we find June or Jane (aged 6). Maybe this was actually James, who was then aged 7? Finally, Elizabeth, aged 5. Oh dear. I was expecting Mary, aged 9.

If this was really ‘our’ Atcherley family, there were a lot of errors in the details entered on the Cornelia’s passenger list. Alternatively, the surname was recorded incorrectly, and this was another family entirely (but perhaps with their forenames and ages recorded accurately!). My money is on this being a badly mangled record of the Atcherleys, perhaps copied hurriedly from another source which may have been difficult to read. However, I think you can understand why I refer to the 1850 census as being the first solid evidence of Philip and his family in America.

That census, as we have seen, found the Atcherleys in the town of Rome, in Oneida county, New York. Like so many American towns, Rome was growing: its population reached 3,584 in 1860 and 11,000 in 1870. Its location beside the Erie canal, completed in 1825 and connecting the Hudson River to the Great Lakes, meant that Rome was a beneficiary of the trade and traffic passing along this route between New York City and the interior. The picture below shows a view of Rome from around 1840. 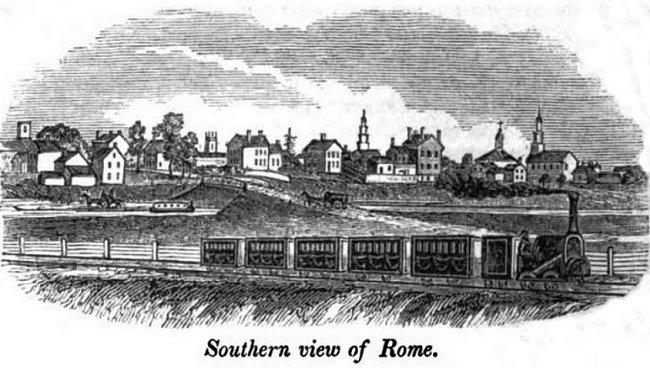 The 1850 census also shows that Philip Atcherley was in work, although not as a trader as he had been back in England. Instead he was a brickmaker, and so was directly involved in the development of the place in which he lived. He also had property to his name, with real estate valued at $400. The move to America had paid off and Philip had left the stigma of his bankruptcy (and possibly the still unsettled claims of his creditors, including his mother) behind him.

Another piece of evidence placing Philip in Rome in the summer of 1850, which I found while carrying out additional research for this story, is a notice in the Roman Citizen newspaper. This was a list of uncollected letters remaining in the Post Office at Rome as of 1 July that year. The names of the addressees in the list included “Powell & Atcherly”. The surname Powell sparked a memory, and I looked again at the page of the 1850 census which included the Atcherley family. The occupants of the very next dwelling to be enumerated after the Atcherleys had also immigrated from England and their surname, though not written clearly and transcribed as ‘Lowel’, was very likely ‘Powel’.

This family was headed by Richard, aged 47, a labourer, and his wife Rebecca, aged 46. Their children were Betsey (13), Eliza (10), Emma (8), Rebecca (6) and finally a two year old son identified only by his initials, R C, who had been born since the family’s arrival in the state of New York. While I was looking at the census, the surname Powell triggered another thought, and my attention turned to Philip Atcherley’s brother James [

] in his home town of Whitchurch.

According to the England and Wales census of 1851 Hannah Atcherley, née Powell, was born at Whixall (about 5 miles southwest of Whitchurch in the Shropshire parish of Prees). If her age was recorded accurately on that census, and on that of 1861, and when she was buried at the end of February 1864, she was probably born in March 1809. Frustratingly, I have not been able to find any trace of a baptism for her. I have had better luck with Richard and Rebecca Powell and their family however.

On the England and Wales census of 1841, Richard and ‘Rebecka’ Powell were enumerated at Wem Moss, about two and a half miles west of Whixall in the township of Northwood, which lay in the parish of Wem. Both Richard (a labourer) and Rebecca were said to be 35, but their ages were no doubt rounded down as was often the case on the 1841 census. Their children were Ann (14, a stay maker), Hannah (7), Elizabeth (5) and Eliza (1). The two younger daughters were most likely the 13 year old ‘Betsey’ and 10 year old Eliza recorded with Richard and Rebecca in Rome, New York, on the 1850 US census. The records of their baptisms provide strong evidence that this was the case.

Elizabeth and Eliza Powell were baptised at the chapel in Newtown on 11 June 1837 and 11 March 1840 respectively, with their father’s occupation recorded first as a brick maker and then as a brick burner. Their older sisters were born and baptised at Prees, Ann on 2 September 1827, Mary on 13 May 1832, and Hannah on 29 March 1834. There was also “Francis” (actually Frances, another daughter), baptised on 11 October 1829, presumably she did not survive. On each of these occasions, Richard Powell was said to be a labourer. 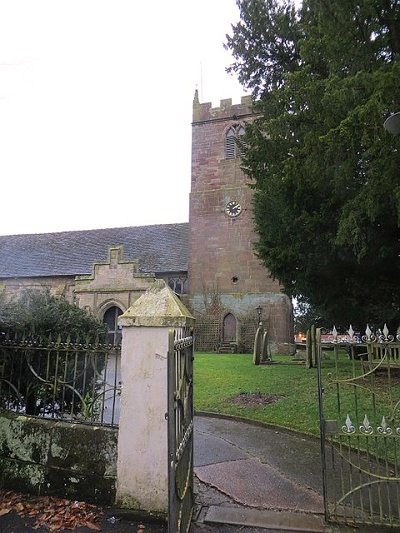 Richard Powell had married Rebecca Ralphs at Prees St Chad (pictured right as it appears today) on 11 September 1826. Both ‘made their marks’ rather than signing the register. When Hannah Powell wed James Atcherley in 1833, the witnesses were M Powell (perhaps Mary, Martha or Margaret, a sister of the bride?) and P R Atcherley (Philip Roger, brother of the groom).

The baptism most likely to be that of the Richard Powell in this story took place at Prees on 29 May 1803. In a pre-printed register of a type I have not seen used elsewhere, it was recorded that 4 month old Richard was the son of Richard and Fanny Powell. Was Hannah Powell a sister of Richard junior, or perhaps a first cousin? I simply don’t know, but I suspect the two were related. If that was the case, the following sequence of events can easily be imagined.

First, Richard Powell with his wife and children emigrated to America in the mid-1840s and eventually settled at Rome where Richard found work. He got word back to his family in Shropshire, telling them about his good fortune, and this information reached his relative Hannah Atcherley. Then, when Philip Roger Atcherley was looking to get away from Whitchurch and start afresh after (or during) bankruptcy proceedings, Hannah or James Atcherley (or both) suggested following Richard Powell and pursuing the opportunity of a new life in the United States.

This is all rather speculative, but as good a working theory as I have for now – maybe one day some evidence will turn up to refute or corroborate it! What I can say with certainty is that neither the Powells nor the Atcherleys remained in Rome. Richard Powell took his family to Canada, where he appeared in the Toronto section of the Canada Directory of 1858 as “Powell, Richard, brickmaker, Yonge st. Yorkville.” Wife Rebecca and children Eliza, Rebecca and Richard E Powell (but strangely not Richard senior) also appeared on the 1861 census there. By 1871 Richard and Rebecca were living in the Dalton District of Victoria North in the Province of Ontario. Richard was by that time a farmer – an English immigrant who had made good.

Philip Roger Atcherley and his family meanwhile had moved West, arriving at Davenport, Scott County in Ohio in 1856. This, however, was just a staging post on the way to another American town. There, Philip was finally able to resume the line of work he had been engaged in during his years in England, by becoming a merchant once more.