WHEREAS a Fiat in Bankruptcy is awarded and issued forth against Philip Roger Atcherley, of Whitchurch, in the county of Salop, Mercer, Draper, and Tailor, Dealer and Chapman, and he being declared a bankrupt is hereby required to surrender himself to the Commissioners in the said Fiat named, or the major part of them, on the 14th day of January next, and on the 8th day of February following, at eleven o’clock in the forenoon on each of the said days, at the Shire-hall, in Shrewsbury, in the said county of Salop, and make a full discovery and disclosure of his estate and effects […] 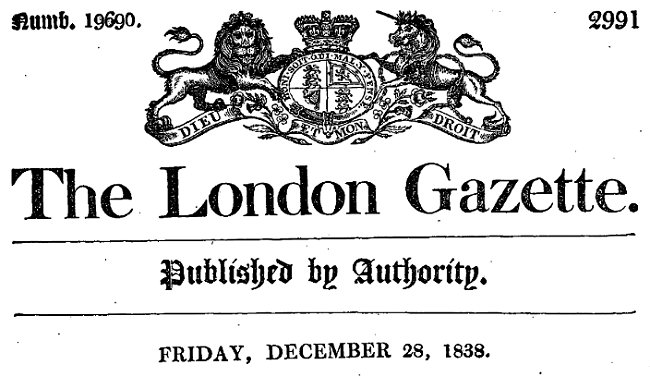 ] at this point in his story, but I do so only to observe the date and place of birth recorded on it: 29 August 1814, in Whitchurch. I suspect however that Philip’s birth actually took place one year later, as he was baptised at St Alkmund’s in Whitchurch on 19 September 1815. The register notes that the family home was in Pepper Alley, and that Philip’s father John Atcherley [

] was a victualler (another copy of the register used the term “inn keeper”). Philip was the sixth and last child, and the fourth son, of John and his wife Martha Atcherley, née Furmston [

Having scoured the historic newspapers online for incidents from Philip’s youth I have found only one, in which he played only a minor role. A libel case, Lowe versus Lewis, was heard at Shrewsbury Lent Assizes on 19 March 1834. The defendant, Mr Lewis, had attempted to gain the affections of Miss Mary Ann Lowe, a Whitchurch girl aged about 19, by means of a letter. But his advances were rejected, and his next letter contained an insult aimed at Miss Lowe’s father – hence the libel case. Philip Atcherley seems to have been involved just before the first letter was sent. In its report on the court proceedings, the Hereford Times of 29 March 1834 stated:

Although no forename was given for young ‘Atcherly’, I believe he could only have been Philip. Was he also employed by Moile and Roscoe? Or was he simply visiting his friend Lewis (who was most likely living in the shop where he worked), and persuaded by Lewis to throw the stone? Whatever the case, within a couple of years of this incident Philip Roger Atcherley was married and working in a shop of his own. He wed Mary Phillips [

Mary Phillips was a widow. Many years later her gravestone would also say that she was born at Whitchurch (on 19 August 1812), but I can find no record of a baptism to corroborate this. The story of Mary’s life before her marriage to Philip Atcherley is short but somewhat complicated. Mary’s surname at birth was Howell. On 30 December 1834, at the church of St James in Walton on the Hill in Liverpool, Lancashire, “William Philip Phillips of the Parish of Whitchurch in the County of Salop Widower and Mary Howell of this Parish Spinster” were married by licence. The witnesses who signed the register were John Howell and James Howell. So far, so good.

] was a widower. On 11 January 1832, “William Philip Phillips of this Parish and Maria Davies of this Parish” were married by licence at Whitchurch, Shropshire. The couple’s union was soon blessed with the arrival of a child. Mary Ann Phillips [

] was baptised at Whitchurch on 20 March 1833, the record of that event showing that the Phillips family lived at High Street, and that William was an upholsterer. Sadly for William, his happiness was soon overturned by events which would (if you will forgive my use of this phrase) knock the stuffing out of anyone.

] died, aged 24. She was buried at Whitchurch on 5 April 1833. Within a year, little Mary Ann had died too. She was buried on 18 January 1834. As we know, the ill-fated William Philip Phillips then married Mary Howell later that same year, entering into a union which would end all too soon through William’s own death. This event occurred less than five months after his wedding: William, aged 28, was buried at Whitchurch on 23 May 1835.

Whitchurch St Alkmund – scene of most of the baptisms, marriages and burials in this story.

The widowed Mary Phillips appointed a solicitor to deal with her late husband’s outstanding financial affairs, and a notice was duly published in the Salopian Journal of 10 June 1835. Before giving directions to William’s creditors, the notice opened with the following statement:

THE WIDOW and FRIENDS of the late Mr. William Philip Phillips, of WHITCHURCH, Auctioneer and Upholsterer, deceased, deeply impressed with Gratitude for the Support which was so liberally bestowed upon him, beg sincerely to return Thanks to those who kindly honoured him with their Commands.

And so we return to the wedding of Philip Roger Atcherley and Mary Phillips in 1836 and the birth of their daughter Anna in 1837, when this young family’s prospects for the future must have seemed bright. Phillip was in business as a mercer and draper at Whitchurch in Shropshire and at Nantwich in neighbouring Cheshire, in partnership with one Robert Evans. This partnership was dissolved on 4 January 1838 by mutual consent, with all debts due to and owing by the said partnership to be “received and paid by the said Philip Roger Atcherley”.

Was it the dissolution of this partnership, and Philip’s responsibility for the debts owed by it, which led to his bankruptcy later in 1838? Or was there another factor? An event which took place during the previous year may in fact have been the foundation of Philip’s financial failure: the death of his father John in January 1837.

After the official notice of Philip’s bankruptcy was published in the London Gazette of 28 December 1838 (the first part of which forms the opening paragraph of this story), this news was widely disseminated via the press across Britain. The circulation of the details of bankrupts in this way was standard practice. Most of the bankruptcy listings gave only brief details of the names, locations and businesses of those involved, culled from the Gazette. In Philip’s case though, some included an additional a piece of information: the ‘Petitioning Creditor’ was Martha Atcherley.

I think Philip must have borrowed a large amount from his father, and that after John’s decease the widowed Martha Atcherley sought to recover what was owed. Philip was clearly not in a position to repay his debt, leaving Martha with no alternative but to seek a fiat in bankruptcy against her son.

As we have seen from the Gazette notice of December 1838, Philip was required to attend two meetings at the Shire Hall in Shrewsbury, on 14 January and 8 February 1839. The notice continued by saying that at those meetings: “the creditors are to come prepared to prove their debts, and at the first sitting to choose assignees, and at the last sitting the said bankrupt is required to finish his examination, and the creditors are to assent to or dissent from the allowance of his certificate.”

A certificate issued by the Commissioners meant that a bankrupt would be “discharged from all debts due by him when he became bankrupt; and from all claims and demands made proveable by the act”. Philip was not granted one on 8 February however. Instead, after that day’s meeting the process of converting Philip’s assets into cash for reimbursing his creditors began. While this must have been an incredibly unpleasant time for Philip and his family, the notices issued in connection with the events of that period give some insight into the business which he had been running. The following is from the Chester Chronicle of 15 February 1839:

Whitchurch, Salop.
DRAPER’S STOCK-IN-TRADE, HOUSEHOLD FURNITURE, &c and all other goods and effects of Philip Roger Atcherley, mercer and draper, a bankrupt.
On the 1st day of March next. TO BE SOLD BY TICKET, by Messrs. CHURTON and SONS, at the Victoria Hotel, in Whitchurch aforesaid, between the hours of four and six in the evening, in one lot, by order of the assignees of Philip Roger Atcherley, a bankrupt, and subject to the usual conditions;
All the well assorted and carefully selected Stock-in-trade of the said bankrupt, as a Woollen and Linen Draper, Hosier, Haberdasher, Hatter, &c.
This will be found well worth the attention of the trade, as the whole of the stock is of the latest patterns, &c. has been purchased from the first manufacturers and is peculiarly adapted to the Stock of a Draper, &c. in a country district.

The stock was sold, and the purchasers announced that they would sell off, on 8 March 1839, “all the Stock of Linen and Woollen Drapery, Silk Mercery, Shawls, Lace, Ribbons, Hosiery, Gloves, Haberdashery, Hats, Bonnets, &c. &c. at an immense reduction from the present cost prices; and having bought the above for cash, will be able to offer to the public of Whitchurch and its vicinity, such unprecedented Bargains as cannot fail to astonish them, as well as give satisfaction.” 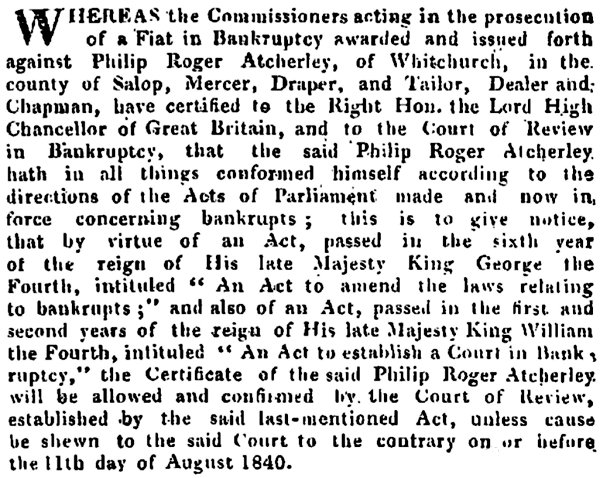 The above notice published in the London Gazette on 21 July 1840 must have given Philip cause for hope. The Commissioners had certified “that the said Philip Roger Atcherley hath in all things conformed himself according to the directions of the Acts of Parliament made and now in force concerning bankrupts” and notice was given that “the Certificate of the said Philip Roger Atcherley, will be allowed and confirmed by the Court of Review, established by the said last-mentioned Act, unless cause be shewn to the said Court to the contrary on or before the 11th day of August 1840.”

It appears that someone did show “cause to the contrary” in Philip’s case, and that the issue of his certificate was stayed. I have found nothing relating to Philip and his bankruptcy in the London Gazette or in the newspapers from August 1840 to the end of 1842, but the Gazette of 3 February 1843 carried a notice of yet another meeting to audit the accounts of Philip’s assignees and make a dividend to his creditors. A further such meeting took place on 2 August 1844. Then, in October that year, almost five years after Philip was declared bankrupt, it was announced that his creditors could “receive their warrants for the Second Dividend of 1¾d. in the pound”.

Did Philip ever receive his certificate from the Commissioners? I don’t know. What I do know is that by the middle of 1850, Philip Roger Atcherley and his family had left his bankruptcy worries behind and made a fresh start – in the United States of America.

> On to Philip Roger Atcherley: A Brit bounces back in the USA – Part 1.