Very few monumental inscriptions at the church of Loppington St Michael and All Angels bear the name Atcherley or Acherley. However many descendants of the Atcherley family were buried here, particularly members of the Dickin family of Loppington and Wem, and there are many MIs dedicated to them. 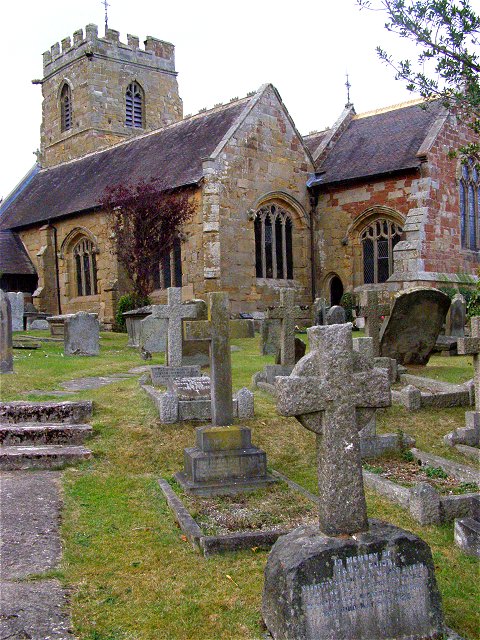 Part of the Dickin family plot in the graveyard at Loppington can be seen in the photo above. In the foreground is a monument marking the grave of someone who provides a good example of the links between the families of Dickin and Atcherley. 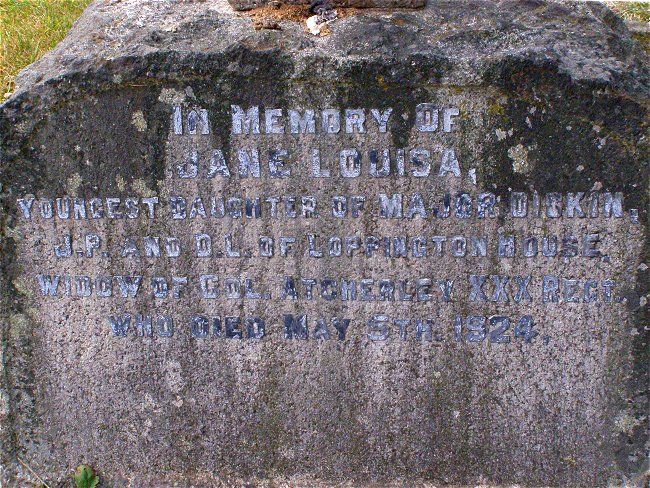 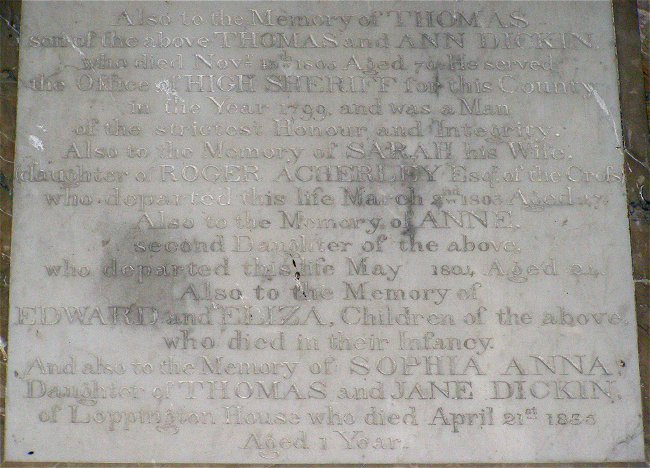 Sarah, grandmother of Jane Louisa, is commemorated on a large wall tablet inside the church, the bottom part of which is shown above. The full inscription is as follows:

Not all of the ages recorded on this tablet were correct. Sarah Acherley for example was baptised at Ellesmere on 5 Mar 1752 and so was at least 50 years of age when she died. I have found no records of baptisms or burials for Thomas and Sarah’s children Edward and Eliza; their second daughter however was baptised as Ann, daughter of Thos. and Sarah Dickin, at Wem on 11 Apr 1780 (the register recording her date of birth as 22 March, 1799). The Loppington register shows that she was buried, as Ann Dickin of Wem, on 14 Jun 1804.

The passing of Thomas and Sarah’s third daughter is also recorded on a wall tablet mounted inside this church: 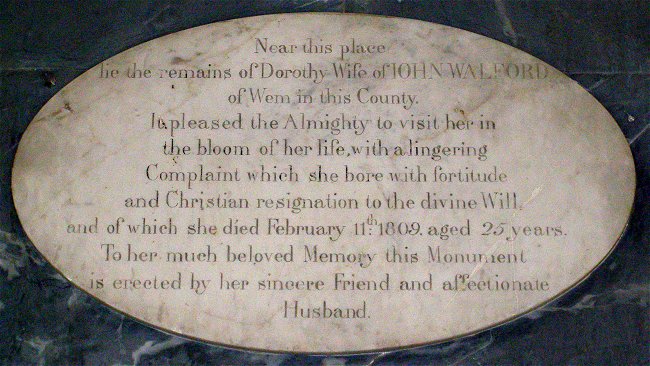 Near this place
lie the remains of Dorothy Wife of JOHN WALFORD
of Wem in the County.
It pleased the Almighty to visit her in
the bloom of her life, with a lingering
Complaint which she bore with fortitude
and Christian resignation to the divine Will,
and of which she died February 11th 1809, aged 25 years.
To her much beloved Memory this Monument
is erected by her sincere Friend and affectionate
Husband. 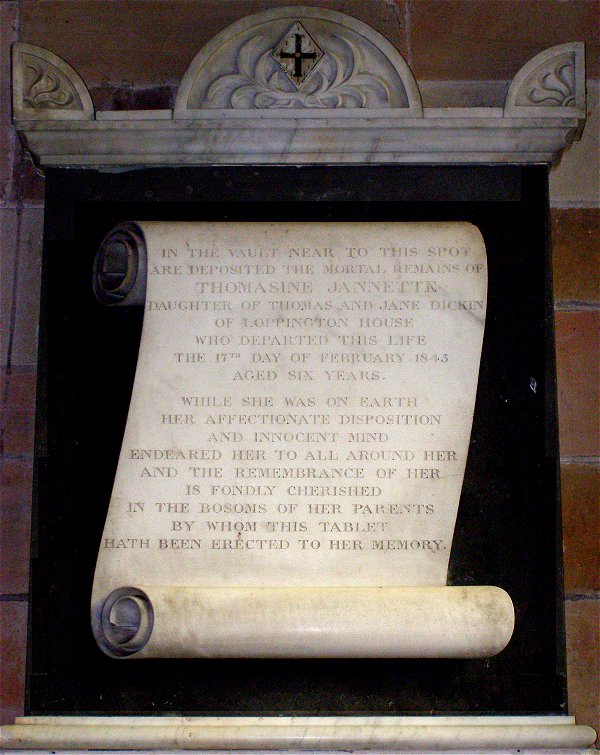 Sophia Anna Dickin was not the only granddaughter of Thomas and Sarah whose young life was cut short, as can be seen from the rather poignant memorial inscription to Thomasine Janette Dickin, a younger sister of Jane Louisa Dickin, which is pictured above and transcribed below:

IN THE VAULT NEAR TO THIS SPOT
ARE DEPOSITED THE MORTAL REMAINS OF
THOMASINE JANNETTE
DAUGHTER OF THOMAS AND JANE DICKIN
OF LOPPINGTON HOUSE
WHO DEPARTED THIS LIFE
THE 17TH DAY OF FEBRUARY 1845
AGED SIX YEARS.

WHILE SHE WAS ON EARTH
HER AFFECTIONATE DISPOSITION
AND INNOCENT MIND
ENDEARED HER TO ALL AROUND HER
AND THE REMEMBRANCE OF HER
IS FONDLY CHERISHED
IN THE BOSOMS OF HER PARENTS
BY WHOM THIS TABLET
HATH BEEN ERECTED TO HER MEMORY. 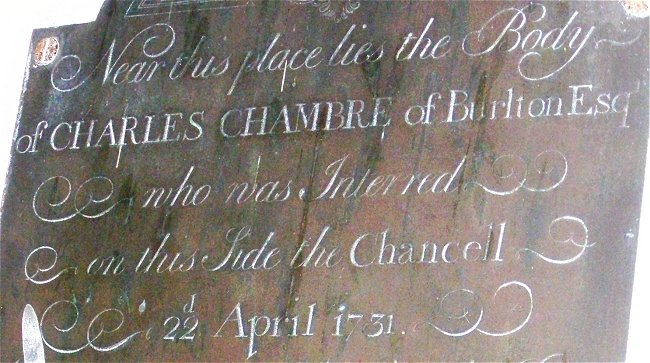 Another Atcherley buried at Loppington was Mary, daughter of Thomas Atcherley and his wife Elinor (Griffiths), who was born on 29 Sep 1657. Mary married Charles Chambre of Burlton (which lies in the parish of Loppington) at Myddle St Peter in 1683. The couple had four children who all died unmarried (Arthur, the first born, passing at the age of 23 while his siblings all died in infancy). Mary was buried at Loppington on 11 Mar 1701/2. I know of no surviving monument which would identify her final resting place. In contrast the place where her husband was buried, inside the church, is clearly marked by a plaque, which also commemorates Charles’s sister and her husband:

Near this place lies the Body
of CHARLES CHAMBRE of Burlton Esqr
who was Interred
on this side the Chancell
22d April 1731.
And also near here is Deposited the Body
of Mrs KATHERINE BOLAS of Ryton
his Sister
who was Buryed the 17th September 1756.
Also the Body of ARTHUR BOLAS
Of Ryton Gent.