My grateful thanks to Find A Grave contributor Shirley Myers Braunbeck, who took the photos below at Cedar Hill Cemetery, for giving me permission to use them here. 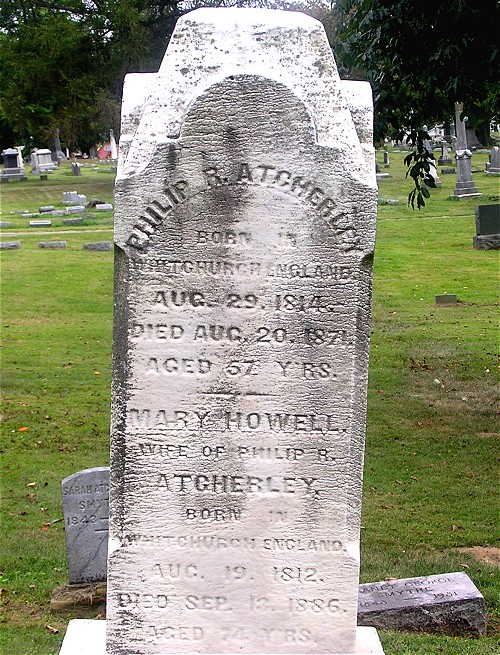 Philip Roger Atcherley was born 28 August 1814 at Whitchurch, Shropshire, England. His wife Mary Howell was also born at Whitchurch, on 19 August 1812. The couple married there on 18 Jan 1836. This was Mary’s second marriage. She had wed William Philip Phillips at Walton on the Hill in Lancashire on 30 December 1834, but within five months of this William died, aged just 28. He was buried at Whitchurch on 23 May 1835. (William himself was widower when he married Mary, having lost both his first wife Maria Davies and their only child Mary Ann Maria Phillips.)

Philip and Mary Atcherley had four children, all born at Whitchurch: Anna, Mary, James Roger, and Sarah. A fiat in bankruptcy was issued against Phillip in 1838, when he was described as a “Mercer, Draper, and Tailor, Dealer and Chapman”. Bankruptcy proceedings rumbled on right through into 1844. This may have been behind Philip’s decision to emigrate to America with his family in 1848. After settling in Newark, Licking County, Ohio Philip established a successful dry goods store. Philip died on 20 Aug 1871, most likely at Newark. His widow Mary passed away there on 13 September 1866. 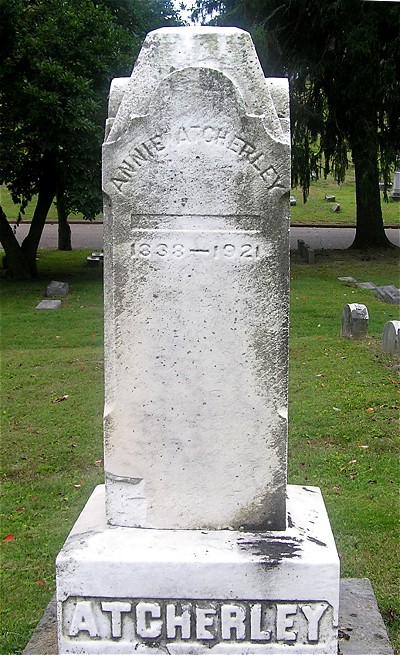 Philip and Mary’s first child, Anna Atcherley (later known as Annie) was born not in 1838 as shown in the MI above but in May 1837; she was baptised at Whitchurch St Alkmund on 7 June that year. Annie never married, and spent the latter years of her life living with her sister Sarah and brother-in-law Brandt George Smythe in Newark. She died on 20 January 1921. 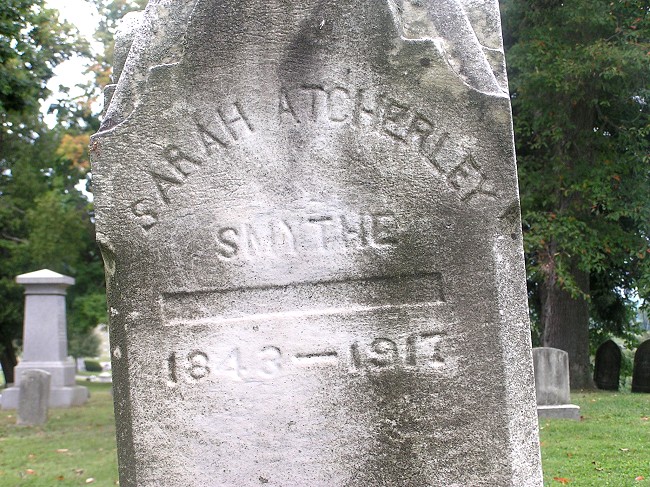 Although her MI shows that Sarah, Philip and Mary Atcherley’s youngest child, was born in 1843 (when her death was registered her birth date was given as 10 September) she was actually born in 1842 and was baptised on 7 October that year. She married Brandt George Smythe, a  lawyer, on 20 December 1865, and died at Newark on 8 Feb 1917.

The Smythe family graves lie next to the Atcherley monument and some can be seen in the background of the picture of above. Brandt’s grave marker, now lying on its back, correctly shows that he lived from 1843 (he was born 21 August that year) to 1931 (he died 15 April). To the right of his marker is that of his grandson Philip Smythe Hervey. Born 2 November 1908, Philip died just a few weeks after his first birthday, on 1 Dec 1909. 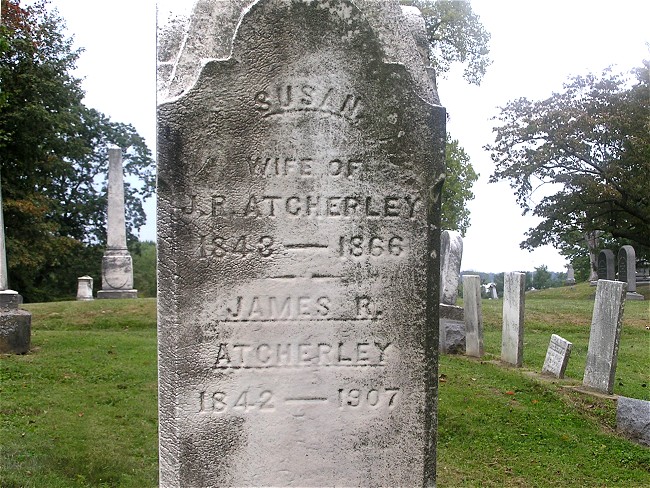 Philip and Mary’s only son, James Roger Atcherley, was probably born around December 1840, his birth being registered in the first quarter of 1841. He was baptised (his name was written in the register as James Rodger) on 17 February 1841. The year of birth given in his MI, 1842, is therefore incorrect. He married Susan, daughter of Benjamin Elliott of Newark, Ohio, in 1865. Tragically, the birth (on 14 July 1866) of the couple’s only child, Benjamin Roger Atcherley, was soon followed by Susan’s death. James (whose name was often written as James Atcherly) served on the Union side in the American Civil War; during that conflict he wrote letters home to his local paper the Newark Advocate. Like his brother-in-law Brandt Smythe he became a prominent lawyer. Known to many as “Squire Atcherley”, James died 7 April 1907 in Zanesville, Ohio.

I have found no records relating to Philip and Mary Atcherley’s remaining daughter, Mary, after her appearance on the Iowa State Census of 1856 when the Atcherley family was living at Davenport in Scott County.

All photos in this article are © Shirley Myers Braunbeck.