The image below is a cropped and enhanced version of a photograph taken by Roger Lewis. My thanks to Roger and his wife Barbara Mallyon for providing the picture and giving me permission to use it here. 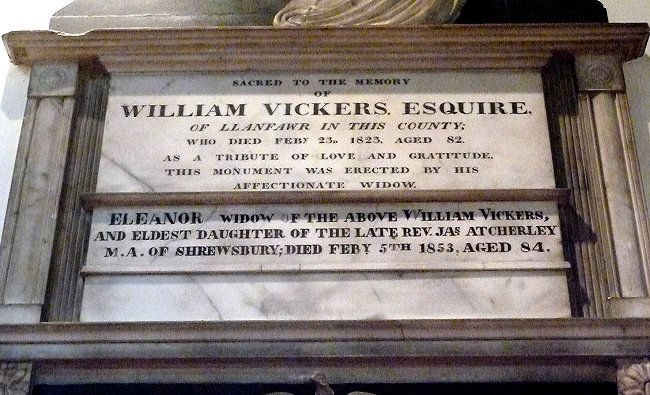 Eleanor Atcherley, second child and first daughter of the Rev. James Atcherley and his wife Eleanor (Griffiths) was baptised 12 May 1769 at St Mary, Shrewsbury, Shropshire. Although I have found no record of the event, she married William Vickers of Llanfaur (Llanfawr) in the parish of Holyhead. William, son of William Vickers and his wife Mary (Jones), was baptised at Holyhead on 11 September 1738.

William and Eleanor remained at Llanfaur until their deaths. The words inscribed upon the above monument, erected in St Cybi’s Church, Holyhead, read as follows:

SACRED TO THE MEMORY
OF
WILLIAM VICKERS, ESQUIRE,
OF LLANFAWR IN THIS COUNTY;
WHO DIED FEBY. 23D 1823, AGED 82.
AS A TRIBUTE OF LOVE AND GRATITUDE,
THIS MONUMENT WAS ERECTED BY HIS
AFFECTIONATE WIDOW.

ELEANOR WIDOW OF THE ABOVE WILLIAM VICKERS ,
AND ELDEST DAUGHTER OF THE LATE REV. JAS. ATCHERLEY
M.A. OF SHREWBURY; DIED FEBY. 5TH 1853, AGED 84.

William Vickers owned property in various parishes “in the County of Anglesey and County of Carnarvon” and in his will of 1 April 1818 he bequeathed his real estate, subject to a number of annuities to be paid to relatives and others, to Eleanor for her life. After Eleanor’s decease William’s real estate was to go to Vickers Hamilton Jacob, of the Dublin Post Office, and his heirs. Eleanor was also to inherit all of William’s “Household Goods and ffurniture Plate Linen Watches Books Pictures and Prints” along with “all the live and dead Stock of farming and Husbandry” on William’s farm at Llanfaur at the time of his death.

My fellow Atcherley researcher Barbara Lang has found that Eleanor wrote at least ten wills over the thirty year period between her husband’s death and her own. Her estate was to go to various sons and daughters of Eleanor’s Atcherley siblings, but she kept changing her mind about which ones were to inherit! However in her last will and testament Eleanor bequeathed all her real and leasehold estates, all her money and securities, along with her “household goods furniture plate linen china books prints ornaments carriages & horses” and all other personal estate and effects to the children of her late sister Arabella, namely Arabella Holt, Elizabeth Atcherley Holt and William James Holt, the last-named being made executor.

After the decease of Arabella and William James Holt, all of Eleanor Vickers’ estate passed to Elizabeth Atcherley Holt, who in 1857 at the age of 48 married widower Captain Aaron Stark Symes. With no children of her own, Elizabeth Atcherley Symes bequeathed some of her substantial fortune to her late husband’s descendants, which accounts for the origin (by way of a Deed Poll in 1954) of the surname Atcherley-Symes. 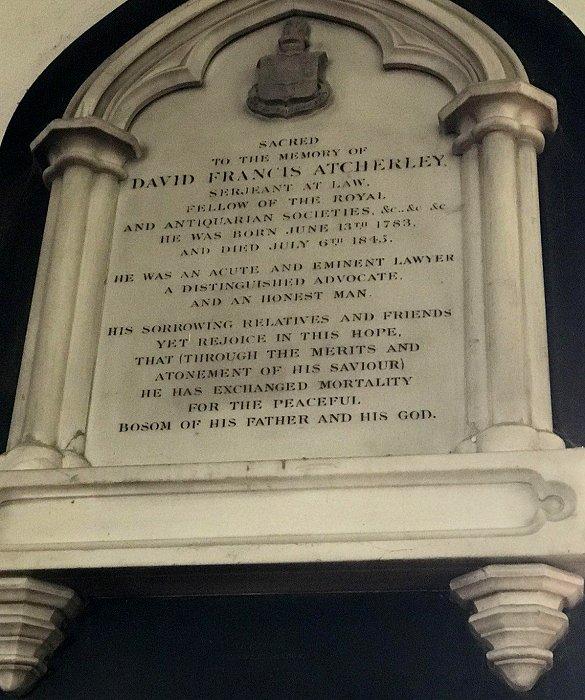 HE WAS AN ACUTE AND EMINENT LAWYER
A DISTINGUISHED ADVOCATE,
AND AN HONEST MAN.

HIS SORROWING RELATIVES AND FRIENDS
YET REJOICE IN THIS HOPE,
THAT (THROUGH THE MERITS AND
ATONEMENT OF HIS SAVIOUR)
HE HAS EXCHANGED MORTALITY
FOR THE PEACEFUL
BOSOM OF HIS FATHER AND HIS GOD.

] died in London. The last resting place of this eminent member of the Atcherley family however was Hope, in Flintshire, Wales. His father, David Francis Jones the elder [

], was born – and also died – at Cymmau in this parish, and it was at the church of St Cynfarch that he was baptised and buried. Jane Jones née Atcherley [

] (wife of the elder D F Jones and mother of the younger) was buried here too.

In time, David Francis Atcherley’s wife Anne Margaret (née Topping), along with several of the couple’s children, also came to be buried at Hope. Their names (along those of some of the next generation of Atcherleys) were inscribed on a separate tablet inside the church. 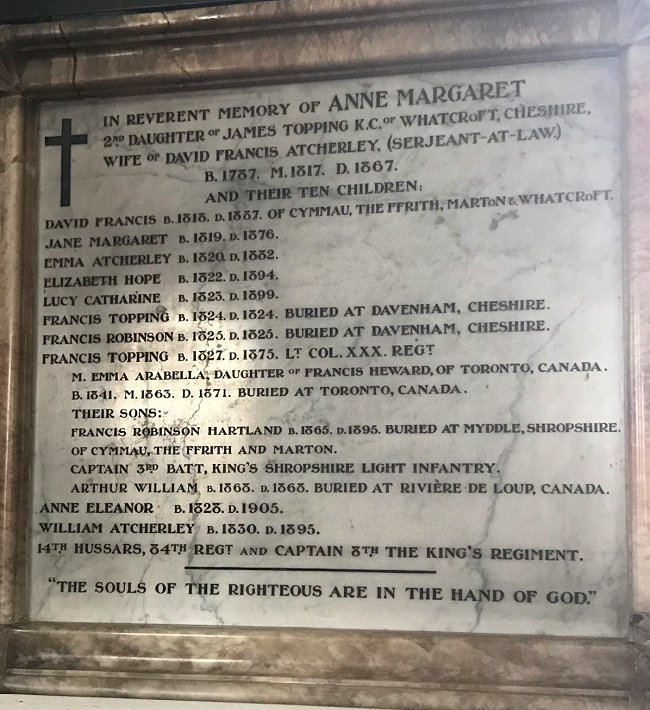 My grateful thanks to Diana Hughes Barney for allowing me to use her photos here. These images were two of over 8,200 photographs taken for and uploaded to BillionGraves, at around 30 different cemeteries / churchyards across the British Isles. Wow!