I am very grateful to Pam McFadden, curator of Talana Museum in South Africa, for sending me the photos below (which I have digitally restored) and for granting permission for their use on this website. 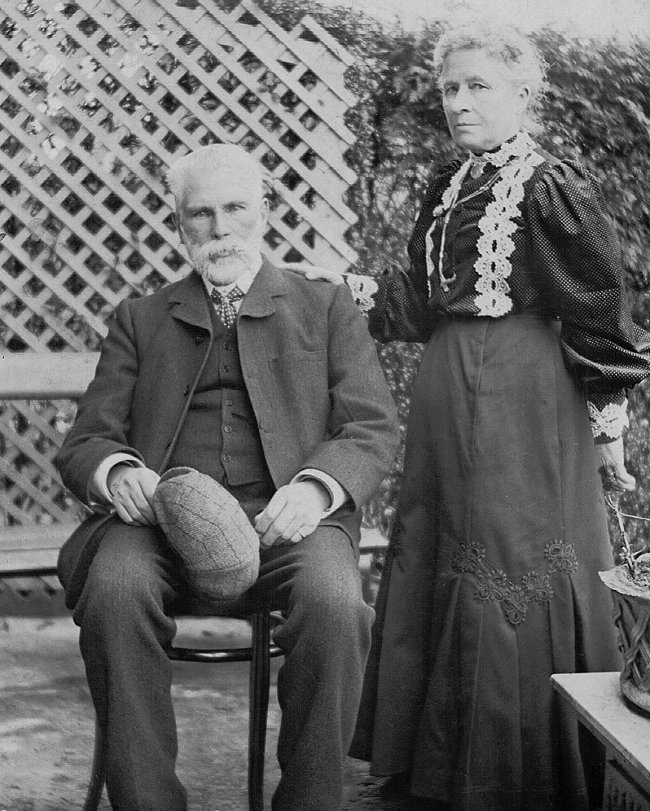 The photograph above is of Edward Ryley [

] and his second wife, Margaret (née Atcherley). The couple are pictured in the garden of their home, Symonsdale, in Dundee, Natal – now the province of KwaZulu-Natal in South Africa.

Edward’s first wife was Margaret’s sister Mary Ellen Atcherley. Both natives of Shropshire, Edward (of Market Drayton) and Mary Ellen (of the Moortown in Ercall Magna) were married at High Ercall on 14 May 1862. They had ten children at Market Drayton before migrating to the Colony of Natal in 1879. There, the couple’s eleventh child Samuel was born. Within weeks of Samuel’s birth his sister Norah Eveline Ryley died, and this death was followed by that of Mary Ellen a week later. Samuel survived only until April 1880. Edward, a single parent with nine children to care for, eventually married his sister-in-law, Margaret Jemima Atcherley [

], at Pinetown in Natal on 3 September 1883 (a copy of their entry in the marriage register can be seen at FamilySearch). Margaret then took on the role of stepmother to her nephews and nieces. 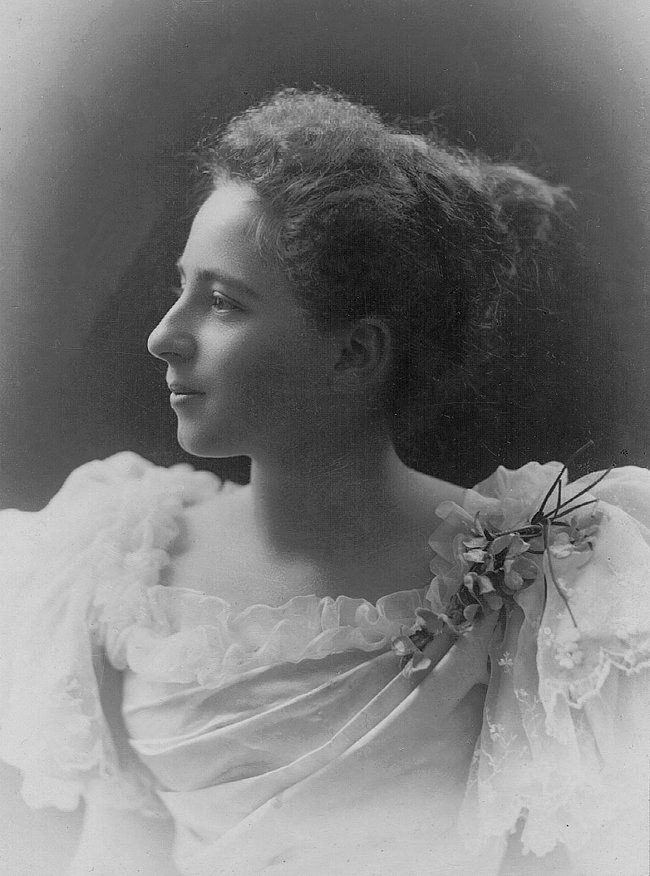 ] (born 1870), who was known as Maud. She is pictured above dressed for the opening of Durban Town Hall. This was presumably the first town hall, opened in 1885 when Maud would have been about 16.

Another photograph of Maud Ryley shows her “with the horse she rode on with her brother Harry from Ladysmith”. Maud married her first cousin Thomas Brookes (son of John Brookes and Charlotte Emma, née Atcherley) at Durban on 2 March 1899. A copy of their entry in the marriage register can be viewed at FamilySearch. Maud passed away at the age of 72 in 1942. Thomas lived for another 12 years, his death (at the age of 82) taking place in 1954. A photo of Thomas and Maud’s gravestone can be viewed on the Gravestones in South Africa section of the eGGSA website. 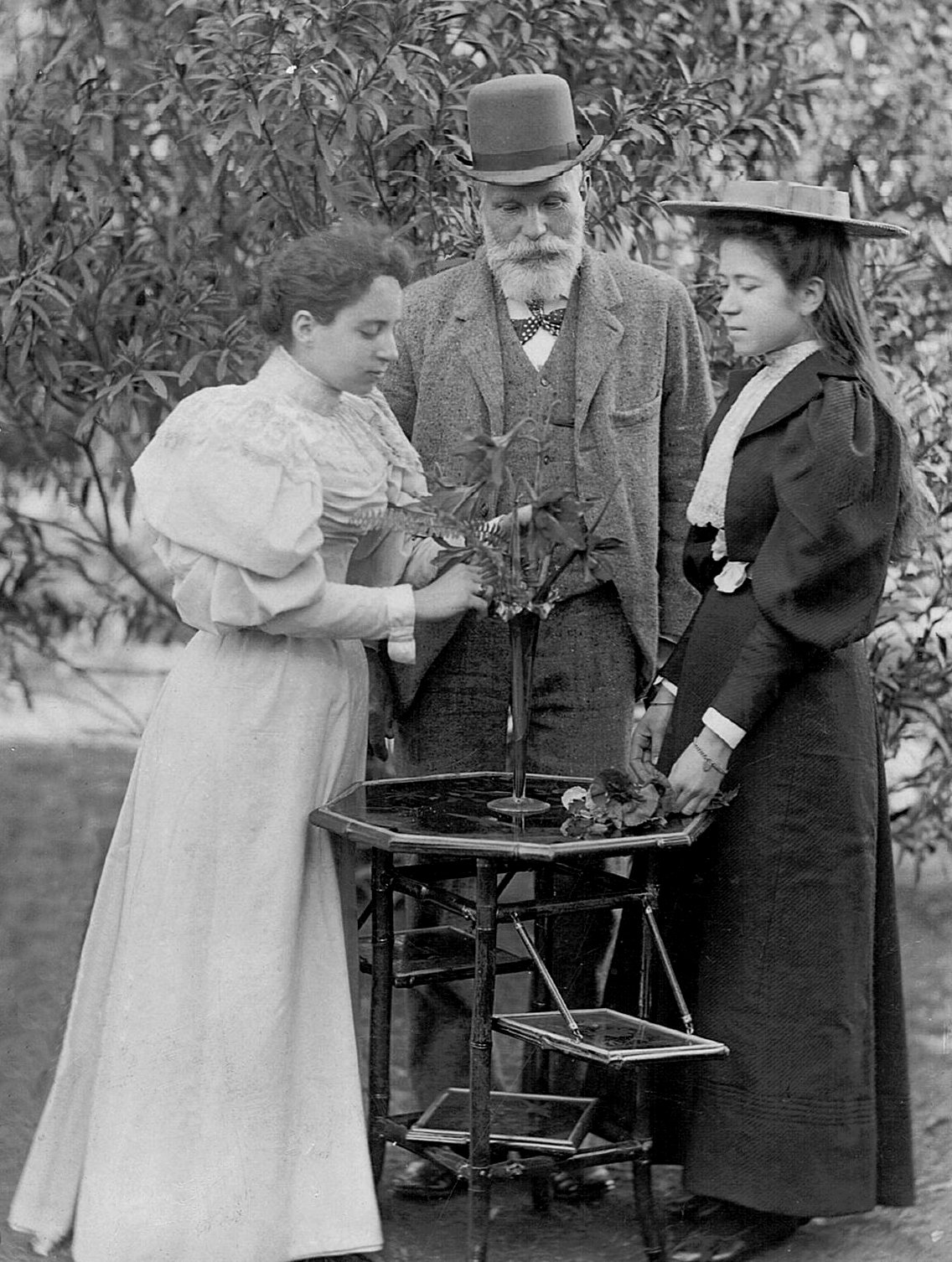 Another daughter of Edward and Mary Ellen was Lilian Gertrude Ryley [

], born in 1877. Lilian can be seen on the right in the picture above, in which she appears with her father Edward and sister Maud. Lilian married Henry Hooke Pearson, at Durban, on 25 July 1900. A copy of their marriage register entry can be seen at FamilySearch.

], who was born in 1868. Harry was a Lieutenant in the Natal Carbineers during the Anglo-Boer War and by 1910 (the year after the photograph above was taken) he had been promoted to the rank of Captain. It was in that capacity that he fought in World War One, the Natal Carbineers then being formally known as the 2nd Mounted Rifles. In 1916 Harry was awarded the Military Cross “for distinguished service in the Field and in connection with the campaign in German South-West Africa, 1914-15.” Harry died, unmarried, at the age of 50 on 13 October 1918; the Gravestones in South Africa section of the eGGSA website has a photo of his gravestone. 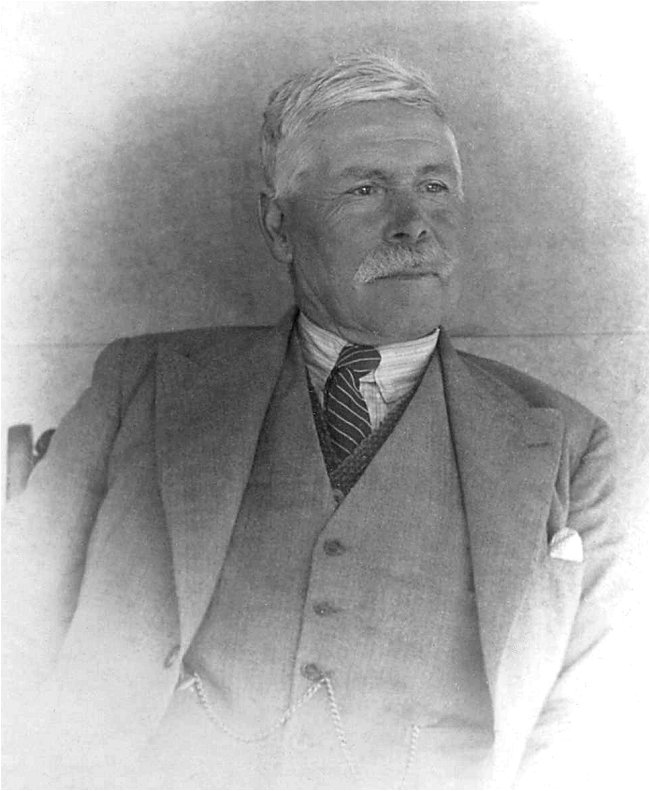 ] was the second son of Edward and Mary Ellen. Born in 1865, Edward married Caroline Christel Illing at Ladysmith, Natal, in 1893. A copy of their marriage register entry can be viewed at FamilySearch. The marriage ceremony was performed by Caroline’s father, German-born William August Illing, and took place in the Illing family’s home. Edward and Caroline had three children: Ethel Illing Ryley (1893 – 1967), Herman Ryley (1896 – 1966) and Alice Mary Ryley (1902 – 1986). Edward Ryley died in 1950, and Caroline passed away just four months later in 1951. A photograph of their gravestone in the Old Cemetery at Newcastle can be viewed on the Gravestones in South Africa section of the eGGSA website. 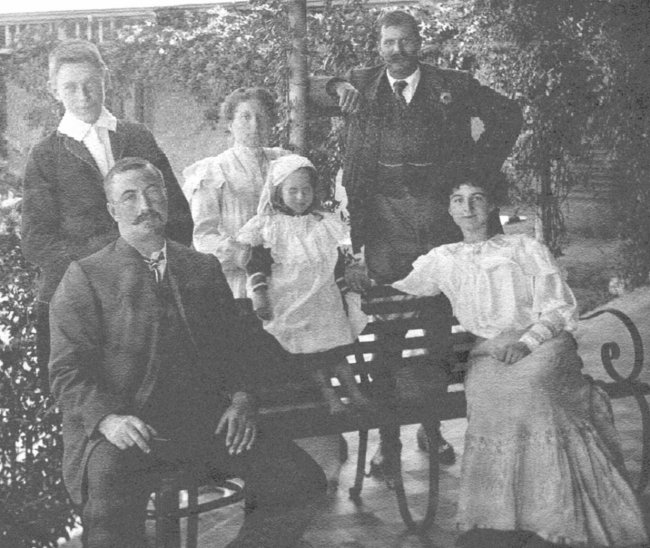 A younger Edward Ryley junior can be seen seated front left in the photograph above, which was taken on the verandah of they Ryley family home, Symonsdale. From the information provided with the photograph it appears that Thomas Brookes [

] is standing at back right, next to his wife Maud (formerly Ryley), who is holding on to their daughter Margaret Brookes [

] (known as Greta). The boy standing at back left, and the young lady seated front right, are sadly not identified. 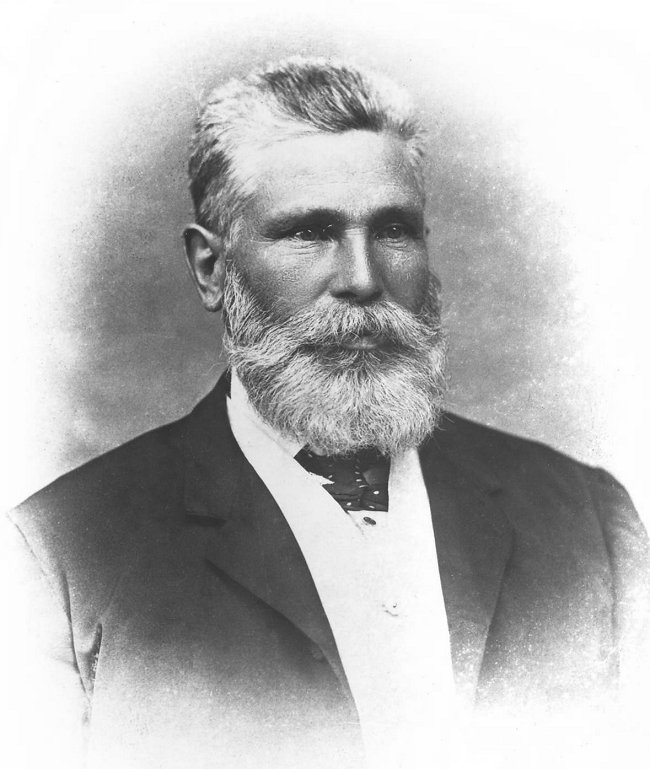 Edward Ryley senior, the father of eleven Ryley children, and husband of two Atcherley sisters, was a prominent citizen of Natal. He entered the world of politics in 1890 and was elected member of the Legislative Council for Ladysmith. He served as a member of the Council of Education and as Chairman of the Stock Commission, before he became the first Minister of Agriculture in 1897. The Ryley home, Symonsdale, served as a British Headquarters during the Anglo-Boer War, and was declared a National Monument in 1981. A photograph of Edward’s gravestone in the Old Cemetery at Newcastle can be viewed on the Gravestones in South Africa section of the eGGSA website, which also has a picture of his second wife Margaret’s gravestone.

All photos on this page appear by courtesy of Talana Museum.