The photograph below appears by kind permission of the Royal Aero Club Trust. 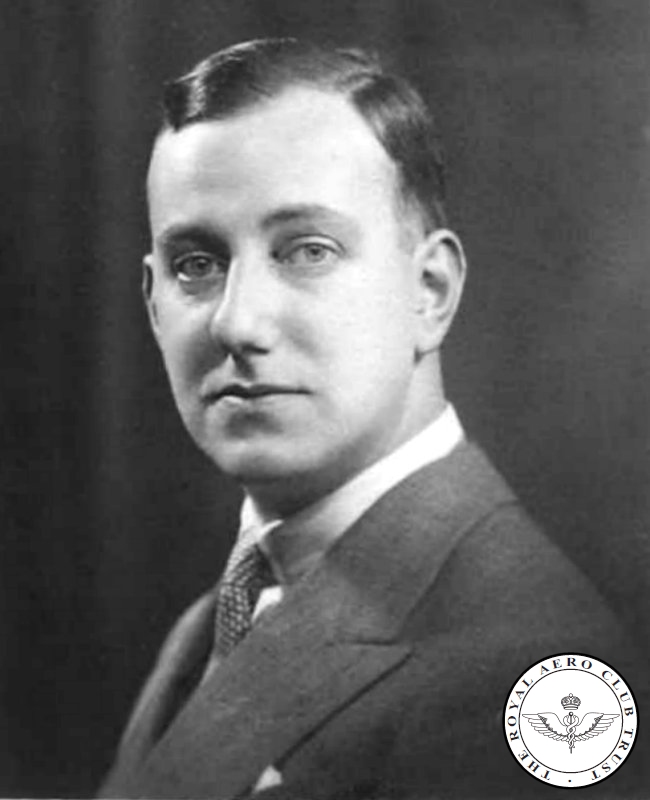 ] not only took his first name from his father and grandfather, he also followed in their footsteps as a provision merchant. The third of three children, and the only son, of Roger Atcherley and his wife Margaret Millner (Robinson), Roger junior was born 1 May 1904 at Barton upon Irwell in the parish of Eccles, Lancashire, most likely Didsbury House in Ellesmere Road, the family home.

Most of the evidence of Roger’s involvement in his father’s business R. Atcherley & Co., comes from records of business trips abroad. A report in the Chicago Packer shows that in 1927, at the age of 22, Roger attended the International Apple Shippers Association convention at Louisville, Illinois, on behalf of the company. Ships’ passenger lists then show him travelling back to Gibraltar in 1929, then back to the USA, on the Cunard liner Laconia, in 1929 and ’30. By this time his family was living at The Cottage, Knowsley, at Prescott in Lancashire.

The purpose of Roger’s visit to the USA in 1930 was, according to the New York Times, to promote the sale of Brazil nuts. He was described as representing the Liverpool Nut Kernel Company, and as the inventor of a machine which removed the Brazil nut’s kernel from its shell undamaged.

Roger had in fact made a patent application in 1926, in respect of “Improvements in Machines for Treating Nuts.” As the title suggests, this invention was an improvement upon existing machines, “of the type in which the nuts are passed into a hollow perforated container which can be rotated about its access … while steam is passed into the said casing for the cleansing and blanching purposes.”

R. Atcherley and Co. had been run as a partnership between Roger Atcherley senior and junior along with their cousin Rennell Atcherley Pugh, but in 1935 the three-way partnership was dissolved (presumably on the retirement of Roger Atcherley senior who was 70 years old that year). The business was carried on by Roger junior and Rennell, only for their partnership to be dissolved in 1937, after which Rennell ran the company. R. Atcherley and Co., which imported dried, preserved and canned foods and materials for the bakery and food manufacturing trades, was eventually taken over by A. J. Mills in 1968 and finally wound up voluntarily in 1999.

What did Roger Philip Atcherley do after his departure from the family business? He may have spent more time pursuing his passion for flying, having obtained his aviator’s certificate from the Royal Aero Club in a 85/95 H.P. Avian Cirrus in 1933. (This explains why the Royal Aero Club Trust has a photograph of him.) If this was the case, he seems to have done so without attracting the attention of the press. The same could not be said for the more famous Atcherley aviators, twins Richard and David, who were born less than four months before Roger.

I have found very few records which shed light on Roger’s life after he left R. Atcherley and Co. in 1937. One of those records is the 1939 Register of England and Wales. This shows Roger living at Lowther Newtown in what was then Westmorland. His occupation was recorded as Race Horse Trainer’s Secretary!

Roger next appears on the family history radar in 1970. Telephone directories show that he was then living in Bridport, Dorset, and that he continued to do so until his death in 1978 – in Spain. Coincidentally, Roger’s oldest sister Kathleen Mary Atcherley died the same year, in Dorset, while his other sister Margaret Ellen died about 1990, in Spain as Roger had done.