Another daughter of draper and silk mercer John Atcherley and his wife Sarah (née Barkley), not shown with her sisters Fanny, Jessy, Rose and Lily Atcherley on their Pictures page, was Lucy [

]. The pictures below have been kindly contributed by Barbara Lang; the images are scans of the original photographs which I have digitally restored to the best of my ability. 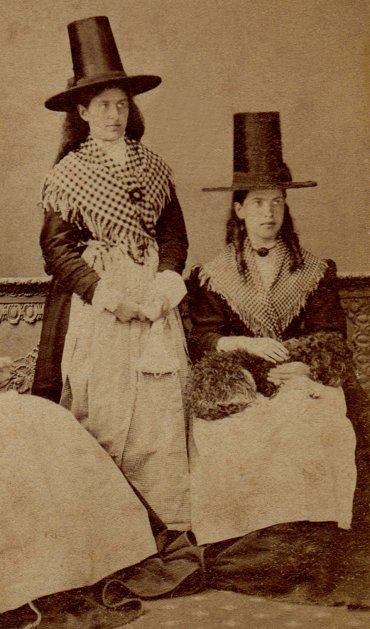 Lucy Atcherley, born at Manchester, Lancashire, on 15 August 1852, was the second child of John and Sarah. She is pictured above with her older sister Fanny Atcherley [

] at the Cathedral in Manchester on 24 March 1875. The witnesses who signed the marriage register were Lucy’s sisters Jessy and Rose, their father John, and their cousin Roger Atcherley (with whom William might have had business relations). I was fascinated to find an entry in the List of Visitors at Barmouth, printed in the Cambrian News and Merionethshire Standard of 30 July 1875, showing that the guests staying at Mrs Lewis’s residence in Glanydon Terrace included “Mr and Mrs Atcherley and family, and Mr and Mrs Patterson, Manchester”. 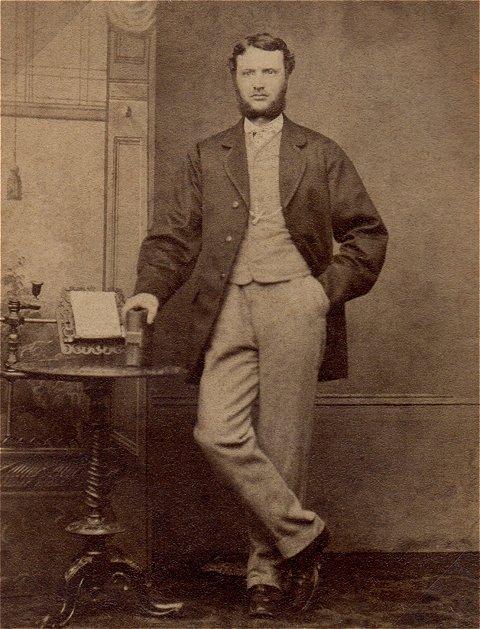 Lucy’s husband William Patterson (above) was an Irishman, born on 8 March 1847 at Eniskillen in County Fermanagh. His parents were Robert Patterson, a teacher, and Marianne. Exactly when he came to England is not known. Pursuit of business opportunities might explain why he crossed the Irish Sea. 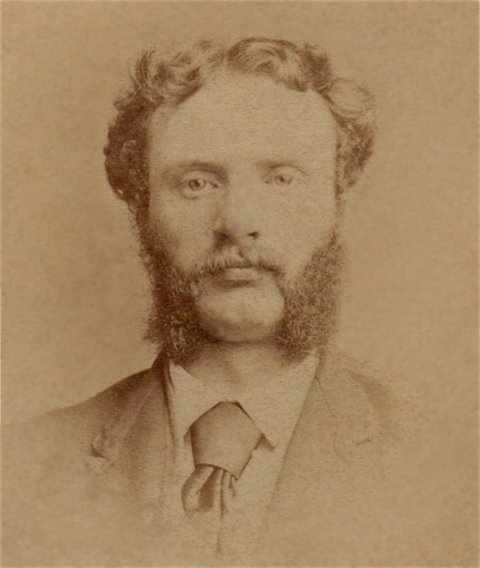 Through various records including censuses and those relating to the births, baptisms, deaths and burials of their children, the movements of the Patterson family after William and Lucy were wed can be traced. The couple’s first three children, Jessie, John Herbert and Robert Ernest Patterson, were all born at Withington in Lancashire (on 4 April 1876, 29 January 1878 and 29 January 1880 respectively). Little Jessie, sadly, also died there: on 16 April 1876 (within two weeks of her birth).

Not long after the birth of Robert Ernest Patterson the family moved to Chapel Allerton in Yorkshire, where they enumerated on the 1881 census. They had moved again, to Leeds, by the time Rosa Eleanor Patterson was born on 28 December 1882, and had relocated once more, to Horsforth in Yorkshire, when Violet Patterson came into the world on 17 August 1884. Violet did not survive for long unfortunately, and passed away at the age of six weeks on 27 September (her memorial card is shown below). 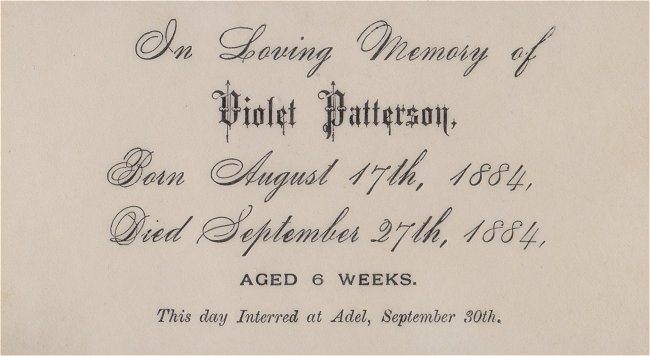 The last two additions to the family, William Burnett Patterson  and Reginald Patterson, were born at Blundellsands on the coast of Lancashire on 21 March 1886 and 6 July 1887 respectively. Yet another change of address then took place before the 1891 census was taken, by which time the Pattersons were living at Birkdale in Lancashire – where the photo below, of Lucy Patterson née Atcherley, was taken.

While the family was growing, and moving from one place to another in Lancashire and Yorkshire, William Patterson continued to trade as a provision merchant. With business partner George Edwin Jepson he was, in 1883, running the firm Patterson and Belshaw at Hanging Ditch in Manchester and at Tipperary, Ireland, while also trading under William’s name alone in Leeds. It was during that year however that financial problems led to “Proceedings for Liquidation by Arrangement or Composition with Creditors” being initiated. Patterson and Jepson were finally received their debtors’ discharge ten years later in 1893.

By this time the Patterson family had relocated to Cwm Alis Hall, Llangollen, Wales. This was far from being their last move. In 1901 the census recorded the Pattersons at Pex Hill in Cronton, Lancashire (William was still a provision merchant, while his two eldest sons were employed as commercial clerks). After this they lived for a while at Heswall Hill in Cheshire. William and Lucy’s only surviving daughter, Rosa Eleanor (known as Nellie, Nella or Nell), had qualified as a nurse at Rochdale Infirmary in Yorkshire and after a spell working there she took up duties at Heswall Children’s Hospital. The photograph below shows Nellie, with colleagues and patients, at that hospital. 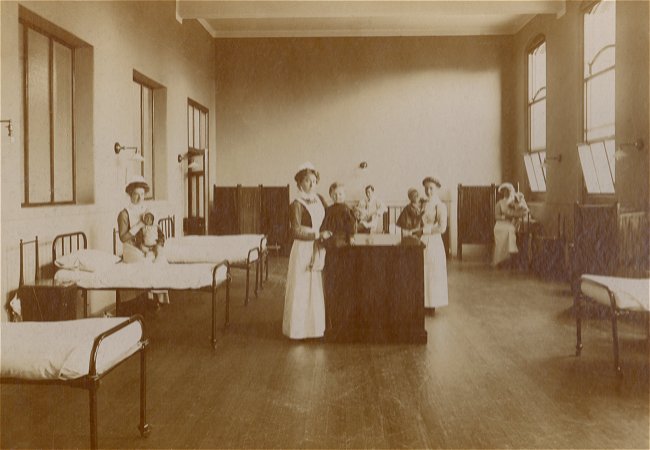 When the 1911 census of England and Wales was taken, Nellie Patterson was living and working in Liverpool. The rest of her family were not enumerated on that census however – because they had made the furthest move of their lives. They were recorded not in England or Wales, but in Canada.

For reasons which we may never know, the Pattersons swapped their relatively comfortable existence in England for a much harder life in Manitoba. Settling initially at Dauphin (where William, Lucy and their youngest son Reg were enumerated in 1911 – sons John, Robert and William were living at Silver Creek in British Columbia), the family then took up residence at Neepawa where William farmed. The whole family – including Nellie – was enumerated there on the 1916 census of Manitoba, Saskatchewan, and Alberta. 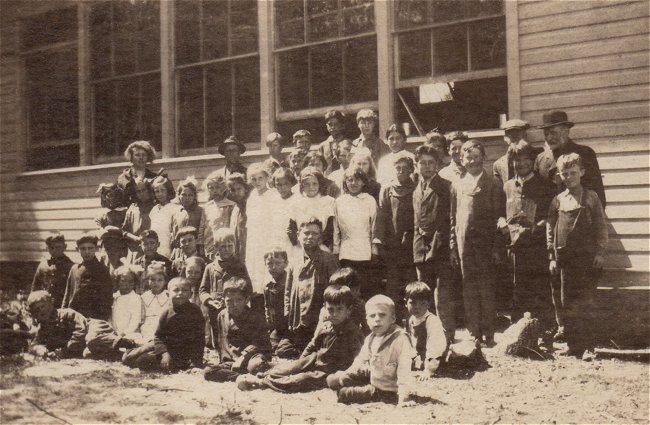 William Patterson did not just farm. He was appointed Police Magistrate for the province of Manitoba on 6 August 1912, and served for 16 years. He was also a trustee for the Kinosota School District for 10 years, and had a school and school district named Patterson after him. William can be seen in the photo above with the pupils of one of the schools in Kinosota. 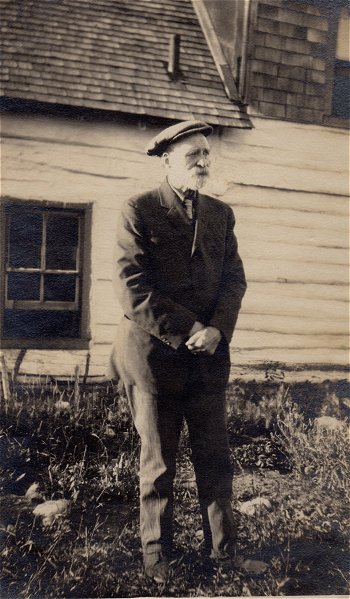 Lucy Atcherley Patterson passed away at Winnipeg, Manitoba, on 29 July 1924, aged 71, and was buried at Winnipeg’s Elmwood Cemetery. William Patterson (pictured above) later moved to Aylmer, Lucerne, Quebec to be closer to his sons. He died there on 28 November 1931, after which he was interred alongside Lucy at Elmwood. The couple’s daughter Nellie joined them in their final resting place following her passing, at Winnipeg, on 25 November 1987.