A ‘North Wilts Herald’ reporter has had the opportunity of inquiring into and verifying a veritable escape from the jaws of death. Miss M. A. Atcherley [

], who resides with her mother at 43, Albion-street, New Swindon, gave a full description of her escape. …

Born in Swindon in 1877 to Edward Richard Atcherley and his wife Elizabeth (Weeks), Martha Ann was one of the first members of the now well-established Wiltshire branch of the Atcherley family (see Edward Richard Atcherley: A new start in New Swindon). Her father and her paternal aunts and uncles were all natives of Staffordshire, and at the time of her birth Martha’s grandparents were living in Wolverhampton. This is where Martha was baptised, on  7 July 1878, at St Andrew’s church, as her older siblings had been before her. By the time the ceremony took place however, Martha’s grandfather Edward Atcherley had passed away. It appears that Martha’s was the last Atcherley baptism in Wolverhampton.

In Martha’s day ‘quack’ medicines abounded. Newspapers were rife with advertisements for pills and potions which, despite the claims made for them, typically provided little if any relief. This was not a new phenomenon. In an article published in their journal in 1841, William and Robert Chambers stated: “Shrewd as the English are in every matter of business, they may be described as children in all that pertains to the curing of disease. It would appear that any man, no matter who, will be almost certain to realise a fortune by manufacturing and selling pretended specifics for bodily complaints, provided he possess a sufficient share of impudence, advertise well, and keep up an imposing personal appearance.”

The authors also noted that “The number of quack medicine advertisements in the English provincial papers is remarkably stationary; it usually varies from twenty to twenty-four in each newspaper, and you may observe the same announcements keeping their place for years. … It is not denied that an advertised medicine contains a substance which may serve a good purpose in certain complaints. But the absurdity is, that in most cases the medicine is put forth as a specific for a wide range of diseases. We have pills offered to us which are to cure all kinds of  ‘coughs, colds, asthmas, shortness of breath, oppression of the chest, dropsy, and consumption.’” 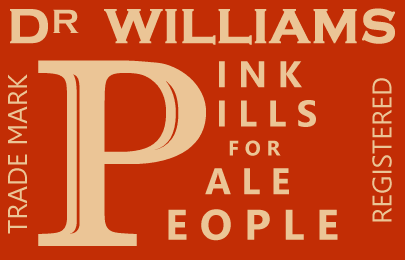 The marketing campaign for Dr Williams’ Pink Pills for Pale People certainly had all the hallmarks of the quack medicine advertisements described above. The rights to the brand were purchased from Canadian physician Dr William Jackson by George Taylor Fulford, of Brockville, Ontario, in 1890. Jackson received $53.01. Fulford went on, to use the words of William and Robert Chambers, “to realise a fortune.”

Dr Williams’ Pink Pills were nothing remarkable, the active ingredients being iron oxide and magnesium sulphate, with starch and enough sugar to help the medicine go down. They were essentially an iron supplement, but with a lower content, and a higher price, than the iron tablets prescribed by physicians. They sold – in 87 countries around the world – because of their memorable name and extremely effective publicity. To quote from Wikipedia:

Fulford was an innovative advertiser. He relied heavily on testimonials, submitted by customers, of miraculous recoveries. He would have these printed in newspapers in [such] a way that it was difficult to differentiate news articles from the advertisements, so readers would see headlines proclaiming these miraculous recoveries, and read on to learn that they were saved by Pink Pills.

This is where Martha Ann Atcherley came in. In November 1896, ‘reports’ headlined “A Verified Escape” appeared in newspapers across Britain. The earliest example I have found was published in the Coventry Evening Telegraph of 24 November. Within days, the same piece was appearing in places as far apart as Bristol, Hull, Hastings, Dundee, Liverpool, north Devon, Ipswich, Aberdeen and Wrexham. The opening paragraph (quoted at the head of this article) was followed by Martha’s testimonial – and by a series of remarkable claims concerning the curative powers Dr Williams’ pink panacea:

‘About the end of January last,’ said Miss Atcherley, ‘I was taken ill. The symptoms were faintness and swelling of the body, chiefly after meals; this was attended with pains in both sides and across the lower part of the body. My doctor told me I was suffering from indigestion and lowness of spirits, and prescribed for me. About the middle of February, thinking a change might do me good, I went away, but was glad to return home, for I felt worse instead of better. In fact I was so ill that I had given up all hope of recovery. Then a friend spoke of Dr. Williams’ Pink Pills for Pale People, and having read comments in several papers on the remarkable cures effected by this medicine, which had attracted public attention, I determined, as a forlorn hope, to obtain some. I procured a box and immediately began to feel the good effects. My health continued to improve, until now, after having taken the fifth box of pills, I am better than I have been for years.’

Miss Atcherley’s statement was confirmed by her mother, who was emphatic in her praise of Dr. Williams’ Pills. She had, she said, quite abandoned any hope of saving her life, and is profoundly thankful that she was persuaded to try Dr. Williams’ Pink Pills for Pale People when all other remedies had failed.

‘Our neighbours,’ remarked Miss Atcherley, ‘look upon me as a wonder, for they thought it was impossible for me to recover.’ Dr. Williams’ Pink Pills are praised amongst all classes as a strengthening and tonic medicine, for men, women, or children. They are not like other medicine, nor can they be imitated, as is sometimes dishonestly pretended; take care that the package bears the full name, Dr. Williams’ Pink Pills for Pale People, and in case of doubts send direct to Dr. Williams’ Medicine Company, 46, Holborn-viaduct, London, E.C., as the pills can be had post-free at 2s. 9d., or six boxes for 13s. 9d. They have cured numerous cases of rheumatism, paralysis, locomotor ataxy, sciatica, influenza, anaemia, palpitations, and the disorders which arises from impoverished blood, such as muscular weakness, loss of appetite, shortness of breath, pain in the back, nervous headache, early decay, and all forms of female weakness.

Martha was 19 years old when these advertisements were first circulated (they made further appearances from 1898 to early 1900). Her father had died nine years earlier in 1887, leaving his widow, Elizabeth, with Martha and nine other children aged from one to twenty years of age. Perhaps because of an inadequate diet, Martha had quite possibly been suffering from anaemia. The iron content of Dr Williams’ Pink Pills, such as it was, may have improved her condition. If a financial inducement had been offered to the family in return for using Martha’s testimony to market Dr Williams’ pills (I have no evidence that such an offer was made), there can be little doubt that it would have been very welcome.

Around the beginning of 1900, Martha married George Wheeler, a farrier from Slough in Buckinghamshire who found work as a striker or smith in the Great Western Railway locomotive works in Swindon. The couple lived with Martha’s mother in Albion Street until at least 1911, and had no children. The death of 66-year-old Martha A Wheeler was registered at Swindon in the June quarter of 1944. Some 45 years later in 1989, G. T. Fulford & Co., the company which manufactured Dr Williams’ Pink Pills and other patent medicines, went into receivership.

Dr Williams’ Pink Pills for Pale People could not possibly have cured all the conditions for which they were claimed as a remedy. It is also extremely unlikely that they saved the life of Martha Ann Atcherley (or of anyone else come to that). Yet ironically (if you will excuse my use of that word, given the content of the pills), because of Martha’s widely published endorsement of them, the Pink Pills have ensured that she lives on – in our thoughts at least – today.