Samuel Atcherley was a first cousin of Henry Atcherley (see Henry Atcherley’s World War One). Like Henry, he joined the King’s Shropshire Light Infantry. Unlike Henry however, Samuel joined the KSLI long before the Great War started – and he was discharged from the Army in 1916, quite some time before the war ended. Sadly, while some of Henry Atcherley’s service records survived the bombing of World War 2, Samuel’s were destroyed, so we cannot consult them to learn about his military career and the reasons for his discharge. Many other records relating to Samuel Atcherley have survived though, and they give us glimpses into his life and his army service before, during and after the Great War.

] was born in 1890 in the parish of Ercall Magna, the fifth child of Henry Atcherley and his wife Hannah Teece. Almost certainly he was born in the village of High Ercall, where he and his family were recorded on the 1891 census (with their surname written as Atcherly) living at Park Road. The birth places of Samuel’s younger brothers and sisters (plus the 1901 census) show that this Atcherley family moved frequently, as father Henry moved from one agricultural labourer’s job to another. Samuel’s childhood was therefore spent in several different parishes in north Shropshire and south-west Staffordshire: Ercall Magna (Shropshire), Knutton (Staffordshire), Childs Ercall (Shropshire), Stoke upon Tern (Shropshire) and Shebdon (Staffordshire). It was almost certainly while his family was living in the parish of Shebdon that Samuel enlisted with the KSLI, on 19 July 1909.

The movements of Samuel’s family during his childhood were as nothing compared with those of his new military ‘family.’ Having been recorded at High Ercall on the 1891 census, and at Stoke Park in the parish of Stoke upon Tern in 1901, “Samuel Atcherly,” aged 21, single, born at High Ercall, Shropshire, a Private, was in 1911 recorded with the 2nd Battalion of the King’s Shropshire Light Infantry at Trimulgherry, Secunderabad, India. The Battalion had arrived there in February that year, after departing Calcutta on the Royal Indian Marine Ship Northbrook on the 8th, arriving at Madras on the 11th, and completing the journey by train.

Secunderabad was the largest station at which 2 Battalion KSLI had been quartered, and here it formed part of the 1st Infantry Brigade. Over the following three years, the Battalion took part in training exercises and manoeuvres, and many of those within its ranks – quite possibly including Samuel – competed in sporting tournaments, including football, hockey and boxing. All this came to an end after the beginning of the Great War in August 1914.

2 Battalion KSLI left for Bombay by train on the morning of 11 October, arriving at their destination on the morning of the following day. The scene which would have met Samuel is described in The History of the Corps of the King’s Shropshire Light Infantry:

There all seemed bustle and confusion, with troop trains arriving in rapid succession, and the quays crowded with troops, baggage and stores, and the harbour packed with ships of all kinds and descriptions. In those days there were no facilities for berthing ships; they had to lie out in the stream and all embarking was done by means of lighters – which added considerably to the difficulties of despatching such a large force. Embarkation was completed by mid-day, and at about 3 p.m. on the 16th October the ships started getting under weigh, and moving out of the harbour; and so ended the battalion’s sojourn in India.

Back in 1911 when the battalion had sailed down the Hooghly River on its voyage from Calcutta to Madras, their ship had exchanged compliments with the German cruiser Gneisenau. Things were very different now however. The steamship Neuralia, aboard which the battalion departed for England, sailed as part of a convoy of 46 troop ships (soon joined by another 29 from Karachi) which were escorted by three men-of-war. German ships were now to be avoided at all costs, which meant taking precautions such as sailing without lights at night. (The Neuralia would later serve as a hospital ship, on which Dr Henry Hemsted, husband of Samuel’s distant cousin Muriel Hope Atcherley, would serve. See Muriel Hope Atcherley: In and Out of Africa, Part 1.)

When the battalion arrived at Plymouth in November 1914, Samuel would have felt the cold, as he and his fellow infantrymen were still wearing their thin Indian kit. Somehow they had not been able to take delivery of the warmer clothing which was supposed to be waiting for them at Aden. At least when they arrived at their camp at Mourne Hill outside Winchester, after their train journey from Plymouth, the men were “cheered by a good breakfast”. 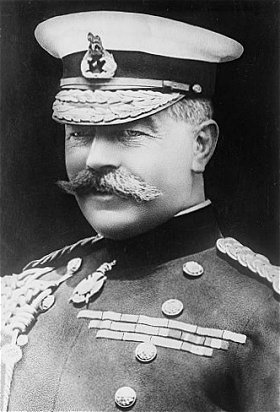 Winchester the battalion was joined by other British infantry and rifle units, plus (on 20 November) Princess Patricia’s Canadian Light Infantry (PPCLI), to form the 80th Infantry Brigade. This brigade in turn formed part of the 27th Division, which on 16 December was inspected on Fawley Down by His Majesty the King and Lord Kitchener (pictured right). During the weeks they spent at Winchester, the battalions of the 80th Infantry took delivery of transport and equipment, and carried out several route marches. According to The History of the King’s Shropshire Light Infantry in the Great War “The weather at Winchester was atrocious, the camp a sea of mud, and all ranks were glad when the order to proceed to France arrived.” Conditions in France, however, would prove to be little better.

The 80th Brigade marched from Winchester to Southampton on 20 December 1914, then crossed the Channel and arrived at Havre the next day. After traveling by train to Aire on the 23rd, the men were billeted at Blaringhem, where they spent 12 days “digging trenches, usually in the rain.” It appears that Christmas for Samuel Atcherley and the rest of the 80th Brigade was not a joyful one. The entry for 25 December 1914 in the PPCLI War Diary reads “Spent morning overhauling packing of transport. Unluckily Christmas comforts not available. Very fine in morning, then misty, cold, frost.”

From Blaringhem, 2 Battalion KSLI marched, in stages, towards the front line. The battalion suffered its first casualties of war on 8 January when a private was killed, and 15 were wounded, by enemy shelling. Shortly after this the brigade was in the trenches, at Vormezeele, were they relieved the 4th Rifle Brigade for two days. Those two days were spent dodging German shells and snipers while standing knee-deep, or worse, in mud and water, with temperatures so cold that around 300 officers and men were left frostbitten and unable to march. Many were incapacitated for several months.

The movements of 2 Battalion KSLI over the rest of 1915 are well documented. The early months saw further tours of the trenches on the front around St Eloi, battles against German forces, and inevitably, many more casualties. Not only were men killed or injured by enemy fire, many also suffered from debilitating “trench foot”. Drafts of new recruits were brought in to make up for these losses, some of these from KSLI’s 3rd (Special Reserve) Battalion back in Britain. This Battalion, in addition to supplying drafts to the front line, also provided home defence. And before the end of 1915, it was the Battalion in which Samuel Atcherley was serving.

When and for what reason Samuel was transferred from the 2nd to the 3rd Battalions of the KSLI, from the front line in France to home soil, I do not know. This means that I cannot be certain whether he took part in any of 2 Battalion’s actions in April and May 1915, when the Second Battle of Ypres, the Battle of St Julien, the Battle of Frezenberg Ridge and the Battle of Bellewaerde Ridge were fought. If Samuel fought in these ferocious battles (and I suspect that he did) he would never forget them, as he would have faced heavy shelling, artillery fire, gas attacks and the loss of many of his comrades.

At the end of May the 27th Division was transferred from V Corps to III Corps, based at Armentieres. Life there was rather calmer, with ‘normal’ trench warfare, better billets and even opportunities for sports, rifle competitions and a Divisional horse show. Again, I cannot say whether Samuel would have been present to ‘enjoy’ this period of relative normality. What is certain is that he had left the 2nd Battalion for the 3rd before October 1915, during which month the 2nd Battalion left France for Macedonia. By this time Samuel was a Lance Corporal of the 3rd Battalion KSLI based at Musketry Camp at Penally in Pembrokeshire, Wales. This information comes not from any Army records, but from the record of Samuel’s marriage, at Pembroke Register Office on 3 October 1915, to Mary Ann Adams (see extract from marriage certificate below).

Mary Ann was a local girl, born 8 April 1886 at Minwear in Pembrokeshire. The 1911 census shows her living at The Grove in Landshipping, Martletwy, Pembrokeshire with her parents (James Adams, a farm labourer, and his wife Margaret), her siblings (Thomas and Louise), her cousin (Amy Cole) and with her 3-month-old son, Daniel Gwyrith Adams. Following the marriage of his mother to Samuel Atcherley, Daniel would grow up as part of the Atcherley family and would later fight – and die – in the Second World War as a Bombadier in the Royal Artillery. He was killed in action on 2 June 1940 at Dunkirk, and later buried in the churchyard of St Caradog, Lawrenny, in his native Pembrokeshire. The database of the Commonwealth War Graves Commission shows him as the son (rather than the grandson) of James and M. Adams, of Lawrenny, and as the husband of Edith May Adams of Cresselly. 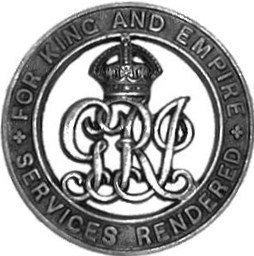 Samuel too, it turns out, was a casualty of war, though his wounds were not fatal. They were however sufficiently severe for him to be discharged from the Army on 19 June 1916. This we know from the records which show that Lance Corporal Samuel Atcherley of the Kings Shropshire Light Infantry, Regimental Number 9258, was issued with a Silver War Badge, number 188614. The creation of the Silver War Badge, inscribed with the words “For King and Empire” and “Services Rendered”, and its issue to military personnel discharged through illness or injury, was authorised by King George V in September 1916. Its purpose was to protect the wearer from accusations of cowardice for being at home while his countrymen were away fighting.

Unfortunately, the records relating to the issue of this badge do not give specific details of the nature of the serviceman’s injury, nor do they tell us where, when or in what circumstances the injury was received. Whatever the nature of his injuries, Samuel was by 1917 able to take up employment as a messenger with His Majesty’s Dockyard at Pembroke Dock, which is where he was working when his son James Henry Atcherley was born (see the extract from James’s birth certificate below). And it appears that Samuel later returned to military service, as his Medal Roll Index Card notes that he was not only a Lance Corporal with the KSLI, but also a Private in the RAOC (Royal Army Ordnance Corps). On the back of the card is a reference to the 53rd Welsh Division.

Although the Great War caused Samuel to suffer significant injury, it also had another major impact on his life – and on the shape of the Atcherley family tree. It was thanks to his wartime posting to the 3rd Battalion of the KSLI at Penally Musketry Camp that Samuel met and married Mary Ann Adams, with whom he would have five children. Samuel and Mary lived out their lives in Pembroke Dock, where Samuel worked as a dockyard labourer. Following their deaths, both were buried at Llanion Cemetery, Samuel on  9 September 1959 and Mary Ann on 30 March 1972. The couple’s descendants today live in various parts of Britain, but some remain in Pembrokeshire – that corner of Wales which became an Atcherley stronghold not only in wartime, but also during the peace for which men like Samuel Atcherley fought.