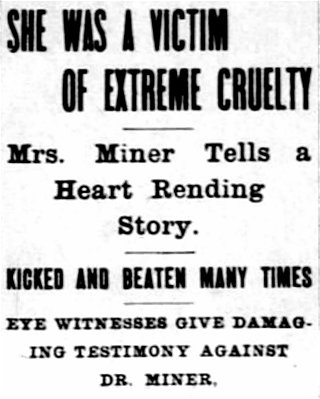 Mrs. Rose Miner told a long story of cruelty yesterday in the circuit court. According to her statements, and in part those of several witnesses, Dr. Miner, whom she is suing for divorce, has treated her in a most inhuman manner, kicking and beating her as he would a beast and using vile and unpalatable language privately and publicly. She says she fears him, that he has threatened to kill her, and that he has beaten their daughter in a most brutal manner.

So began the legal battle between Rose Miner (née Atcherley) [

] and her husband Frank [

], which lasted for just under three weeks and was accompanied throughout by detailed reports in the local press. It was, I guess, the ‘celebrity divorce’ case of its time and place, The Honolulu Republican noting that “it attracted attention because of the prominence of the parties to the suit.” The paper asserted that it was “the hardest fought divorce case in the records of the Circuit court of Hawaii” which had “in many ways […] become a cause celebre in the history of judicial procedure” in the Territory. It was “replete with sensational features and dramatic incidents.”

What is it about the relationship difficulties of others that excites the interest of so many people? Having been through an unpleasant relationship break-up myself, I see such events as a sad chapter in the lives of those involved. As a family historian however, I also see them as part of the wider story of our ancestors: not something to gloss over or ignore, but equally not something to sensationalise or revel in. The events were a consequence of what went before, and they shaped what came after, so it is important to look at these episodes in the lives of people past as part of the bigger picture – and also to treat the subject matter with sensitivity. It is in this spirit that I will tell the story of Rose Atcherley and Frank Leslie Miner. The quotes which follow, interspersing my own narrative, come from newspaper coverage of the Miners’ divorce case.

Mrs. Miner took the stand at 3:45 p.m. She is a typical English brunette, not uncomely, rather small in stature. Her face is sad and she speaks with reserve but with quiet frankness. …

Moving swiftly on from the The Honolulu Republican’s verdict on her ‘comeliness’, Rose Miner was small in stature: passenger lists in 1915 and 1933 recorded her height as 5 feet and either 2, 3 or 3½ inches. The same lists show that her eyes were grey, as was her hair – but now we know that before she greyed, Mrs Miner was a brunette. And of course, an English Rose.

Rose Miner was born, as Rose Atcherley, in Manchester, Lancashire, in May 1861. According to a short biography of her husband, Rose was the daughter of a “wealthy Manchester merchant” – a reference to John Atcherley, a silk mercer, who left a personal estate valued at “under £30,000” when he died in 1880. John’s wife, Rose’s mother, was Sarah, née Barkley.

Rose’s early education was with the Jebb sisters, Anne [

], and 16 other girls aged from 7 to 17 as scholars at the Jebbs’ school, which was also staffed by a German governess and a housemaid. One of the other pupils, Mary Wall [

], was a third cousin once removed of the Atcherley sisters – I wonder if they knew? One thing I’m sure the Atcherley girls were aware of is that the Jebbs were their relatives, second cousins in fact.

Later, Rose studied music at Stuttgart in Germany, which might explain why I have not found her on the 1881 census of England and Wales. On 12 February 1886, Rose wrote a letter to her friend Charlotte Ainslie, describing a concert at which she “heard Professor Bruckner play with the orchestra”. She went on to say that Bruckner was “the first professor at the conservatorium now.” It was while she was studying at Stuttgart that Rose Atcherley met her future husband.

The witness said his name was Frank Leslie Miner, that he was born in Vermont and is 46 years old. He is a physician and surgeon, being a graduate of McGill University, Montreal, Canada, where he took a four year course. He was a practicing physician and surgeon when he first came here In 1878. He left here in the spring of 1880. He went hence to Canada to visit his parents, remaining there two years, resting and trying to regain his health. He then went to London, where he had been before, to work in the hospitals, to study medicine and surgery there. He continued there one year. Left London a second time, going to Heidelberg, Germany, to take up microscopy. Including vacations he remained there three and a half years. He took in the colleges and incidentally acquired a knowledge of the German language. On leaving Heidelberg he went to Vienna to do bedside work. Thence he returned to Heidelberg and London, in the latter city taking the degrees of the Royal College of Physicians and Surgeons. While in England he was married at Leeds, in 1886, near which place his wife’s mother resides. After the wedding they went to Liverpool, where they remained one night sailing thence for Boston, the following day.

It appears that the marriage of Frank Miner and Rose Atcherley took place in a non-conformist church or chapel, or perhaps a Register Office, in Leeds, in the third quarter of 1886. It also seems to have been a low-key affair, as I have yet to find any newspaper announcements or notices relating to it. Neither do I have a record of the newlyweds’ departure from Liverpool, but that is because the passenger lists held by The National Archives begin in 1890. Fortunately, surviving records of passengers arriving on the other side of the Atlantic go back earlier than this.

The passenger list for the Scythia (pictured above), arriving at Boston, Massachusetts, USA on 1 October 1886 from Liverpool, England included Frank Miner, 32, physician, native of Canada, and his wife Mrs Miner, 32, native of England. The intended destination for the Miners was Canada, and they were travelling with 19 pieces of baggage.

This information led me to a newspaper advertisement for the Cunard Line’s Royal Mail steamers in the Liverpool Mercury of 16 Sep 1886: the Scythia, under Captain Roberts, was due to depart for Boston on Tuesday 21 September. Prospective passengers were reassured: “With the view of diminishing the chances of collision, the Steamers of this line take specified courses according to the season of the year.”

Another newspaper, the Aberdeen Journal, shows that the Scythia called at Queenstown (nowadays Cobh), Ireland, on Wednesday 22 September, stopping there for an hour an half to pick up “passengers, despatches, &c.” before resuming its Atlantic voyage. Frank Miner would later testify that it was on this journey that the first hint of trouble between husband and wife arose.

The bickerings began early, the first outbreak, according to the doctor, occurring on the steamer as soon as the sea sickness had worn off, the third or fourth day out. The doctor said he asked his wife to play the piano, as he knew she could play two or three pieces very well, though he didn’t know anything about her musical accomplishments beyond that. She simply looked up cold and hard, throwing up her head and glaring at him. She said she couldn’t play, wouldn’t play and didn’t play. He brought all the persuasion of a newly married man to bear on her, but in vain and he was cruelly hurt. […] There were no other unpleasant scenes on the way over and the landing in Boston was safely made.

The short biography of Frank Miner, which I referred to earlier, states that after Frank and Rose sailed to America “the young couple spent the winter of 1886-1887 visiting friends in Canada and New England.” Both friends and family of the doctor were on the newlyweds’ itinerary: there were visits to a cousin, to the Montreal ice palace, and finally to Frank Miner’s father, when at least one social gathering was held. It appears that for the new Mrs Miner, these experiences were endured rather than enjoyed, and it is unlikely that she made any new friends. One report of the evidence given in court by Frank Miner, relating to this period, suggested that the further north the couple went, the colder it got – “atmospherically and conjugally.” The prospect of a move much warmer climes seemingly did little to thaw the frosty relations however.

Though it had been understood before the marriage that they were to come to Honolulu, she insisted on returning to England when the time to move came and it was only after long persuasion he induced her to come. He would not return to England because it was an old country, holding out no prospects for a man. Besides his health had failed there twice and here he knew he had a good opening.

Then came the trip here, a deal with Dr. Brodie, a chum and college mate, whose practice he was about to acquire…

The Miners arrived at Honolulu, aboard the S S Alameda from San Francisco, on Saturday 16 April 1887. It was soon announced in the local press that Dr Miner, who was well known in Honolulu as a prominent physician, would take charge of the practice of Dr John Brodie, “during the latter’s absence in the States for the benefit of his health.” About a fortnight later, a “fine bay horse” arrived for Frank, aboard the brigantine Consuelo.

From 28 May 1887, notices began appearing the Honolulu newspapers, advertising that “Dr. F. L. Miner will be at the office of Dr. Brodie until November 1st, when he will take possession of the Makee residence.” This building was a “fine residence on the corner of Beretania and Union streets”. Frank’s plan was to make “some few changes” before moving in to the house, “a portion of which will be devoted to his dispensary and consulting rooms.” The Hawaiian Gazette was of the opinion that “Dr. Miner has been particularly fortunate in securing this centrally located and well built edifice for a residence and the practice of his profession.” If Frank shared this view at the time, he would later change his mind.

[The] scene shifted to the house now occupied as a residence by the Miners. They occupied it in a hurry and it was fitted up in a hurry. Mrs. Miner seemed especially hostile to the operating table. Indeed, the doctor says that operating room has been the ghost in the family closet that never would [lie] down; that he has suffered from it ever since it was established.