“In 1890, while in San Francisco we quarrelled because I wanted to go to England. He struck me at that time. He hurried me off to Salinas without permitting me to get proper clothing. He required me to live on a horse ranch in a cabin with no servant. I had to care for my child, then only fourteen months old. I wanted to go back to England and leave him. He made me sign what money I had, from an income of 60 or 80 pounds a year, over to him and when I got to San Francisco I hadn’t sufficient money to pay my way. The doctor followed me and we patched it up. We came back to Honolulu.” — The Honolulu Republican, 20 November 1900. 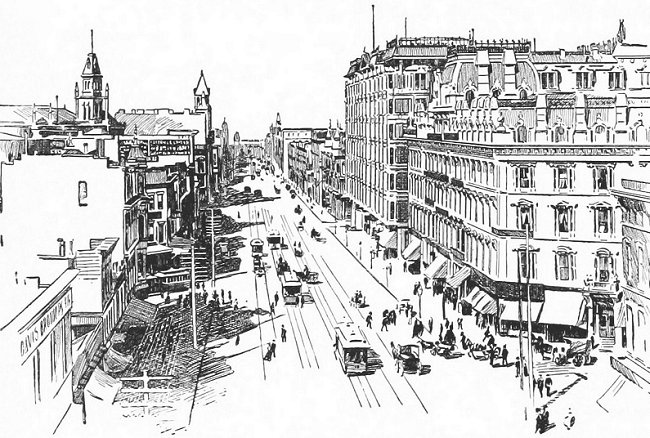 San Francisco (1890s), a staging post on the Miners’ trips
between Honolulu and the interior of the USA

], as reported above, is only a partial account of one side of the story of the Miners’ unhappy holiday in the USA. The Pacific Commercial Advertiser’s account of Rose Miner’s allegations expanded a little on the first part of her statement:

The doctor outfitted himself before leaving Honolulu and told his wife she might get her necessary clothing in San Francisco. When they arrived there Dr. Miner insisted on going at once to Salinas, and would not permit his wife to secure suitable dresses. This she considered cruelty. At Salinas they lived in a log cabin on a ranch and Mrs. Miner complained that the doctor would not allow her to procure help, but made her do all the work with the assistance of the nurse, who was supposed to have the care of the little child, Gladys, who was then but 14 months old.

What was the truth of the matter? Passenger lists printed in The Hawaiian Gazette when the Miners departed from and returned to Honolulu in 1890 show them leaving with a maid, and coming back with a nurse. Undoubtedly it was the same woman who travelled with the family to Salinas and back, but was she a maid, a nurse, or both?

Doctor Miner’s version of events differed from that of his wife. Although the following, from The Honolulu Republican of 1 December 1900, begins “On going to England,” the context in which it appears indicates that it actually relates to the Salinas saga:

On going to England he bought his clothing here, because it was cheaper for him to do so and bought his wife’s clothing in San Francisco; he paid between $300 and $400 for them. On that occasion he did not strike her, he said. He said Mrs. Miner was never compelled to do any work; this in direct denial of Mrs. Miner’s testimony that she had no servant.

One thing which is not in doubt is that Rose eventually left Salinas and headed to San Francisco, with the intention of returning to England. Frank Miner [

] testified in 1900 that this was one of two occasions when Rose had deserted him. On this particular occasion, she also deserted their baby. For the doctor, recalling these events ten years after they happened was a distressing experience. These paragraphs appeared in The Honolulu Republican of 1 December 1900:

Dr. Miner was on the stand to tell the story of the failure of his marriage. He was telling how he had been summoned from a hunting trip to Cottonwood, California, to his home at Salinas, by a telegram from his wife, saying, “Come home; little V. is very sick.” It seems that “V.” referred to little Gladys, whose real name [actually, her middle name] is Vera. He said he found the little one, then fourteen months old, lying on her stomach, arms and legs extended, pale and emaciated.

Here Dr. Miner broke down, as he did the other day when a witness spoke of the affection that had existed between himself and his child. He wept and appeared to have a mild attack of hysteria. It was a sad scene and to end it Judge Humphreys adjourned his court […]

] for San Francisco “being unable to stand the life” according to The Pacific Commercial Advertiser of 20 November 1900. Another newspaper reporting on the Miner divorce hearing stated that witness Mrs A Long “said that when the alleged desertion of the baby took place at Salinas the father and nurse took care of the child.” Doctor Miner testified that he followed his wife to San Francisco “and after a long siege of earnest entreaty induced her to return and resume her maternal duties to the child.”

Having ‘patched up’ their differences, Frank and Rose Miner returned with daughter Gladys to Honolulu and family life probably continued much as it had before. The Pacific Commercial Advertiser of 20 November 1890 announced that Dr Miner had “returned from the Coast on the Australia and has resumed practice at his office and residence, Beretania street”. Among the cases he dealt with which made the local press, was the illness of a Lord Raynham (who Frank treated at the Hawaiian Hotel), and a native Hawaiian woman who had been “shot by a Chinaman” (Frank “extracted the bullet that had lodged rather to the side of her spinal column”).

In June 1892, it was Frank and his family who needed medical attention. They were driving in their horse-drawn buggy one Saturday night when “a native on horseback ran into the buggy, upsetting it. The occupants were thrown violently to the ground. The doctor escaped with a few bruises on the arm and hip, while Mrs. Miner sustained injuries to her arm. The little daughter was badly shaken up. The rider was picked up in an unconscious condition, and was found to have his jaw broken.” I guess the rider needed medical attention too.

Iolani Palace as it appears today

Although Frank Miner later claimed that Rose “would not affiliate with Honolulu social circles”, this accusation does not appear to have been entirely true. The doctor and his wife were both on the invitation lists for a lavish fifth wedding anniversary celebration in November 1891, and a state ball at Iolani Palace in March 1892 – this does not necessarily mean that they attended either event of course. They were however present at the Accession Day reception held at Iolani Palace on 29 January 1892, for the names Dr and Mrs F L Miner were written in the register of those who were presented to Her Majesty Queen Liliʻuokalani. (The Queen had succeeded her late brother, Kalākaua, as ruling monarch of the Hawaiian Islands following the King’s death on 20 January 1891.)

The Miners appeared in a list of attendees at another function held at Iolani Palace, later in 1892: a grand ball given by the Queen on 19 August. Also at the ball (held in honour senior French naval personnel from the visiting French Flagship Dubourdieu) were the “Misses Leleo”. One of these young ladies was almost certainly Mary, also known as Mary Kinimaka [

], who was destined to become Rose Miner’s sister-in-law. I wonder if the paths of Rose and Mary crossed at this grand ball?

The ball was, in the words of The Pacific Commercial Advertiser, an “entire success”. “The interior of the handsome building was decorated and illuminated with wonderful effect. The throne room with its handsome furniture, crystal electric light chandeliers and floral decorations presented a most charming and attractive appearance […] Dancing commenced shortly after 9 o’clock, and what with the handsome costumes worn by the ladies and the uniforms of the naval officers, the scene in the throne room was very pretty. The arrangements were in every respect as perfect as possible […]”.

The days of Honolulu’s royal receptions and balls were numbered however, for the end of the Hawaiian Islands’ monarchy – not to mention their independence – was nigh. The writing had been on the wall for some time.  White people from American and Europe (haoles, in the local lingo), who constituted about 15% of the population, had long since taken control of most of the kingdom’s business interests and wealth. Sugar production, on plantations owned by haole growers, dominated the economy – but for it to thrive, the Hawaiian Islands would have to become a part of the USA.

In 1887 King Kalākaua, under threat of armed force, was compelled to sign what became known as the “Bayonet Constitution”. This stripped the monarch of most of his executive powers. Restrictions on who could vote meant that the Hawaiian Islanders were no longer in control of their own country – a haole-dominated legislature was in charge. However Queen Liliʻuokalani’s accession to the throne in 1891 brought the prospect of a change to this new order. Her Majesty received a petition, signed by two-thirds of the electorate, asking her to rescind the Bayonet Constitution, and she began work on a replacement. 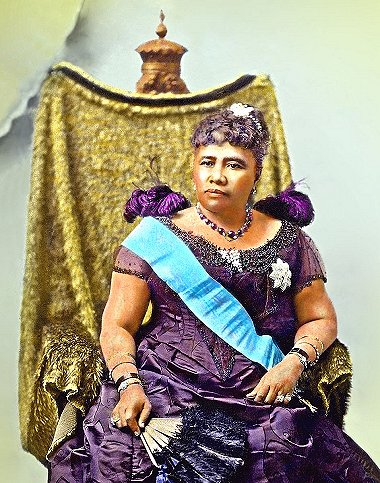 In response to this perceived threat, some members of the haole community formed the ‘Annexation Club’ and, with support from the American Minister John L Stevens, began plotting the overthrow of Queen Liliʻuokalani (pictured right). The Queen’s announcement, on 14 January 1893, that she intended to adopt her new Constitution, acted as the plotters’ call to arms. A ‘Committee of Safety’ was formed and a request for the assistance of United States forces, to put down the supposed threat to the lives and property of US citizens, was made. On 16 January 1893 a contingent of US marine forces landed at Honolulu. A new, provisional government was established the next day. The Queen had been deposed.

This change of regime had repercussions for the Miner family. On the plus side, the Provisional Government of the Hawaiian Islands appointed Frank to its Board of Health, and then also engaged him as prison physician. On the other side of the coin, the way in which the new government came to power meant that distrust and suspicion were rife, and Frank’s appointment as prison physician was questioned by some. Was he a ‘friend of Government’?

The matter came up for discussion at a meeting of Council on 11 April 1893. In The Pacific Commercial Advertiser’s account of the proceedings, it was stated that “The Attorney-General said he had supposed that Dr. Miner was as good a friend of the Government as any physician here. He thought those who stated the contrary were in error.”

The Council meeting revealed more than just ananswer to the question of Dr Miner’s loyalty. Mr Emmeluth, who had raised the issue of Frank’s appointment, noted that “Dr. Miner had removed himself and family on 17th [March] to Judge Widemann’s.” In reply, “Mr. Tenney said Dr. Miner had been visiting at his house during the late war. His wife was timid and nervous, and so he had taken her at her request to Judge Widemann’s with his child, and came back himself.”

Was Rose’s nervousness behind the other news that came out of the Council meeting, news not only about the Miner family but also Rose’s brother, Dr John Atcherley? “President Dole—I understand that Dr. Miner is going away in a few weeks. Mr. Emmeluth—And I understand he has a brother-in-law waiting to take his place.”

These statements were confirmed in an announcement printed in the Honolulu Evening Bulletin of 19 April 1893: “Dr. F. L. Miner and wife will leave by the steamer Australia. After visiting the World’s Fair they will go to England, for the benefit of Mrs. Miner’s health. The doctor expects to return in three or four months. During his absence his office and practice will be taken by his brother-in-law, Dr. J. Atcherley, L.R.C.P., M.R.C.S., London [

Picture credits. San Francisco, 1890s: Image from page 604 of Personal Recollections and Observations of General Nelson A. Miles, published 1896; taken from British Library Flickr Photostream, no known copyright restrictions. Iolani Palace: Photo by D Ramey Logan, taken from Wikimedia Commons and adapted, used, and made available for reuse under a Creative Commons licence. Queen Liliʻuokalani: Digitally restored and colourised version of a public domain work by Mark James Miller, taken from Wikimedia Commons and used under the terms of a Creative Commons licence.