Rowland Atcherley was a doctor during a time in British medical history known as ‘the period of medical reform’. The boundaries between the different branches of medical practice were blurring, as those branches moved towards becoming a unified profession. Within the profession there was greater organisation, and sharing of knowledge, along with improvement in education and training. It was also a period when attempts were made to bring in legal regulations to protect the livelihoods of trained and qualified practitioners, and the lives of the public at large, from unqualified ‘quacks’ and irregulars.

] was born at Newton Abbot, in the Devon Parish of Wolborough. He was baptised at the parish church of St Mary on 8 February 1813, when his father was described as “Adjutant of the Haytor Reg’t Volunteers” (see An Officer and a Gentleman: Roger (or Rowland) Atcherley).

What led Rowland junior to be the first of the Atcherleys to become a physician? Well, his maternal grandfather was William Oliver Esquire, M.D. [

], of Bath, who was in turn the son of another Dr William Oliver [

] who also practised in Bath. Medical practice was therefore very much in Rowland’s blood!

Rowland’s grandfather William Oliver junior had studied at Oxford, matriculating at Christ Church on 20 January 1748/9 at the age of 18. William Oliver senior, Rowland’s great grandfather, gained his medical training at Pembroke College, Cambridge, and at Leiden University in the Netherlands. By the time that Rowland Atcherley was old enough to go to university however, Oxford and Cambridge had largely fallen out of favour with those pursuing a career as a physician. In the words of Anne Digby (writing in Making a Medical Living):

Until the mid-eighteenth century the Universities of Oxford and Cambridge were important – if declining sources – of medical graduates; smaller numbers qualified at continental schools, especially Leiden; and a few at Trinity College, Dublin. By the early nineteenth century the rise of medical education in the four Scottish universities of Aberdeen, Edinburgh, Glasgow and St Andrews had transformed this situation. Edinburgh, in particular, attracted many English students.

Although Edinburgh was the most popular destination for English students, Rowland Atcherley studied at Glasgow University (pictured above) and attained his MD in 1837, at the age of about 24. How long was he there? Richard Moore (in Shropshire Doctors and Quacks) notes: “It was possible for practitioners with some experience to obtain the degree of MD by brief attendance at a university such as Glasgow.” Without knowing the date of Rowland’s admission to the university it is impossible to know, but he may have gained experience working with one or more established physicians before going to Glasgow for a relatively short period of time to secure his qualification as a Doctor of Medicine.

Regrettably, I have very little information on Rowland’s post-1837 career. Records relating to his marriage (to Ann Compton Du Moulin [

] on 13 January 1846, at Bathwick) and to the births and baptisms of his children (Ann Isabella [

]) record him either as a physician or a doctor of medicine. The latter records also show some if not all of the places where this Atcherley family lived (and where Rowland also practised?) after his marriage. Daughter Ann was born Abergavenny in Monmouthshire, Wales (on 3 July 1846) and baptised at Plymouth in Devon (on 5 February 1847), while both sons were born at Shaldon in the same county (in 1848 and 1850). 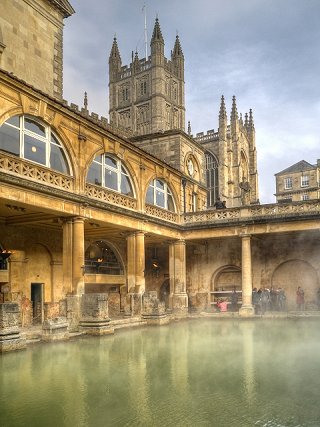 Other sources show that prior to his marriage (and possibly for a short time afterwards) Rowland Atcherley, M.D., was based in Bath, where he lived in Pulteney Street. His physician forebears had found Bath to be a profitable place to practice; hopefully Rowland did too. There, in addition to the private practice I presume he engaged in, he acted as one of two Medical Officers for the Bath branch of the Mutual Life Insurance Society, which was established in 1834. (The Great Bath, with Bath Abbey in the background, are pictured left.)

Writing on the subject of “The Physician in the 19th Century” one author has said that in the early part of that century, “Doctors were gentlemen of the old school and deemed socially acceptable. They were often invited to dine with the families they treated, or spend the night as guests.” Other practitioners – surgeons and apothecaries – had to take their dinner with the servants. I would guess that this was predominantly the custom of those wealthy enough to be able to afford the services of the doctors.

The reasons for this social distinction between the three types medical practitioners, which considered physicians as gentlemen and placed them on “the highest rung on the social ladder”, were as follows. First, their training – unlike that of surgeons and apothecaries – did not involve apprenticeship. Second, their work did not (in theory at least) involve manual labourer, again unlike surgeons, who carried out operations (and were therefore regarded as ‘trade’). Apothecaries meanwhile, operating as dispensers of medicines from their shops, were also most definitely in trade – albeit a trade which was considered honourable and which commanded respect in the community at large.

The lines dividing these supposedly separate branches of medical practice were already blurring however. As far back as 1704, the Society of Apothecaries (a City Livery Company incorporated by royal charter in 1617) won a legal case against the Royal College of Physicians which allowed them not just to dispense but also to prescribe medicines. This, according to the Royal College of General Practitioners, “led directly to the evolution of the apothecary into today’s general practitioner of medicine”. Indeed, in 1799 William Charles Wells M.D. (in a letter to Lord Kenyon) referred to “the complete establishment of the apothecary as medical practitioners”. The business of dispensing medicines was becoming a task primarily undertaken by chemists and druggists. 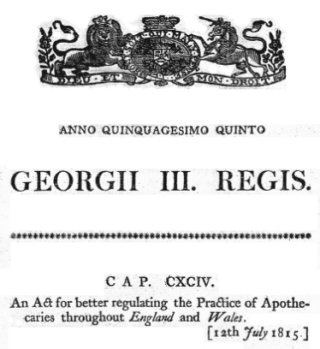 Developments in organisation, education, communication, regulation and unification within the medical professions were also taking place. In some of these areas, the apothecaries took the lead. The passing of the Apothecaries Act 1815 (An Act for better regulating the Practice of Apothecaries throughout England and Wales) gave the Society of Apothecaries important new roles. One was the organisation (in England and Wales) of examinations in medicine, surgery and pharmacy (which could only be taken after students had been certified as attending lectures and hospitals). Another was the licensing of those who passed. This was another crucial stepping stone on the path which led to apothecaries becoming general practitioners.

In London, the practices of ‘physic’ and surgery were the domains of the Royal Colleges of Physicians and Surgeons respectively. In 1832 however, a new organisation was formed for both physicians and surgeons, outside London. The inauguration of the Provincial Medical and Surgical Association took place at a meeting of doctors, at which Sir Charles Hastings proposed the creation of “an Association both friendly and scientific for the sharing of knowledge between doctors”. A decade later its members numbered 1350, and a regular journal was launched to facilitate the exchange of information and experience between those members.

Rowland Atcherley M.D. of Bath became a member of the PMSA, appearing in the list of the society’s members published in The Transactions of the Provincial Medical and Surgical Association from at least 1846. His name had also appeared in an earlier copy of this publication, then named the Provincial Medical & Surgical Journal, in 1844.

That year’s volume of the Transactions provides a fascinating insight into the state of medical knowledge at the time. Physicians and surgeons may have been better trained than they had previously, but in many ways they were still very much in the ‘dark ages’ with regard to their understanding of the nature and causes of disease, and of appropriate medicines and other forms of treatment. One article on hygiene referred to “epidemics of a miasmatic nature”, the spread of ague by miasmata was also mentioned in a published letter. The theory that diseases were caused by ‘bad air’ or miasma was not abandoned until after 1880.

The PMSA was not formed with the aim of initiating medical reform, but its members took a great deal of interest when Sir James Graham introduced into the House of Commons a bill “for the better regulation of Medical Practice throughout the United Kingdom”. This is very evident from the 1844 volume of the Provincial Medical & Surgical Journal. Both the Journal and the Bath Chronicle and Weekly Gazette carried reports of “a meeting of the members of the Medical Profession, practising in Bath and its vicinity”. The following is from the Gazette:

The Chairman having stated the object of the meeting, remarked that the medical profession had long needed some legislation for its government and for its improvement, its members had gone on for a great number of years without any legal enactments but such as had been almost worse than none at all […] The Apothecaries’ Act had done much in this respect, inasmuch as it gave the Court of Examiners the power of preventing persons from dispensing medicines who were not members of their body. The Act was, however, defective, in not giving to the other two branches of the profession the same power, and also in its requirement of an apprenticeship of five years as a preliminary qualification to the practice of medicine. Much good had, however, resulted from the Act; it had produced a better educated class of practitioners, and had greatly raised the respectability of that branch of the profession.

The proposed bill would, however, be much more beneficial. The Council of Health and Education would be of great importance both to the profession and the public; but care should be taken that a clause should introduced into the bill similar to that in the Apothecaries’ Act, preventing persons from practising without legal qualifications. The prohibition of unqualified persons from public offices was not a sufficient protection to the regularly qualified practitioner; the unqualified would not seek such situations, but would avoid the exposure of their ignorance on the wards of the hospital, or in the sick rooms of the union house. (Hear, hear.) The field of private practice was all such persons cared for. He (the Chairman) thought that if the profession would only be true to themselves, and use the influence which they possessed among the members the Legislature, they would be placed on a pinnacle which they had never before attained, and the public would be much, if not still more, benefitted [sic]. (Applause.) […]

One of the doctors present at this meeting, at which a series of resolutions relating to improvements needed in the bill were agreed, was Rowland Atcherley.

Sir James Graham’s bill ultimately failed. However, in 1858 the Medical Act became law and established the General Council of Medical Education and Registration of the United Kingdom (which later became the General Medical Council). This at last created a statutory body responsible for maintaining a register of qualified medical practitioners, and defining the nature of the qualifications necessary to obtain registration. For many of today’s scholars of medical history, this marked the end of the ‘period of medical reform’.

An organisation which played a key role in the drafting of the Medical Act and getting it through Parliament was the British Medical Association. This was the new name (adopted in 1856) of the Provincial Medical and Surgical Association, which had extended its membership to London doctors in 1853 and changed the name of its journal to the British Medical Journal in 1857. 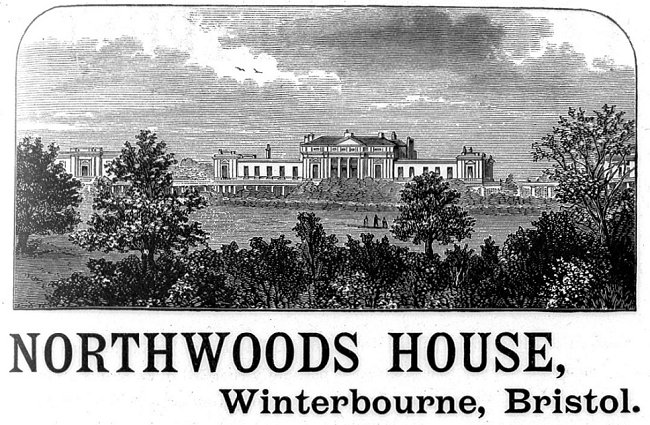 Sadly, Rowland Atcherley did not live to see any of these developments. On 24 December 1850 he was admitted to Northwoods House at Winterbourne near Bristol, a private institution “for the treatment of various forms of Mental Infirmity occurring in Ladies and Gentlemen of the upper and middle classes.” He died there, from epilepsy, on 10 March 1851, and was buried at the parish church of Winterbourne four days later, leaving a widow and three very young children.

< On to The widowed Ann Atcherley and matters pecuniary.